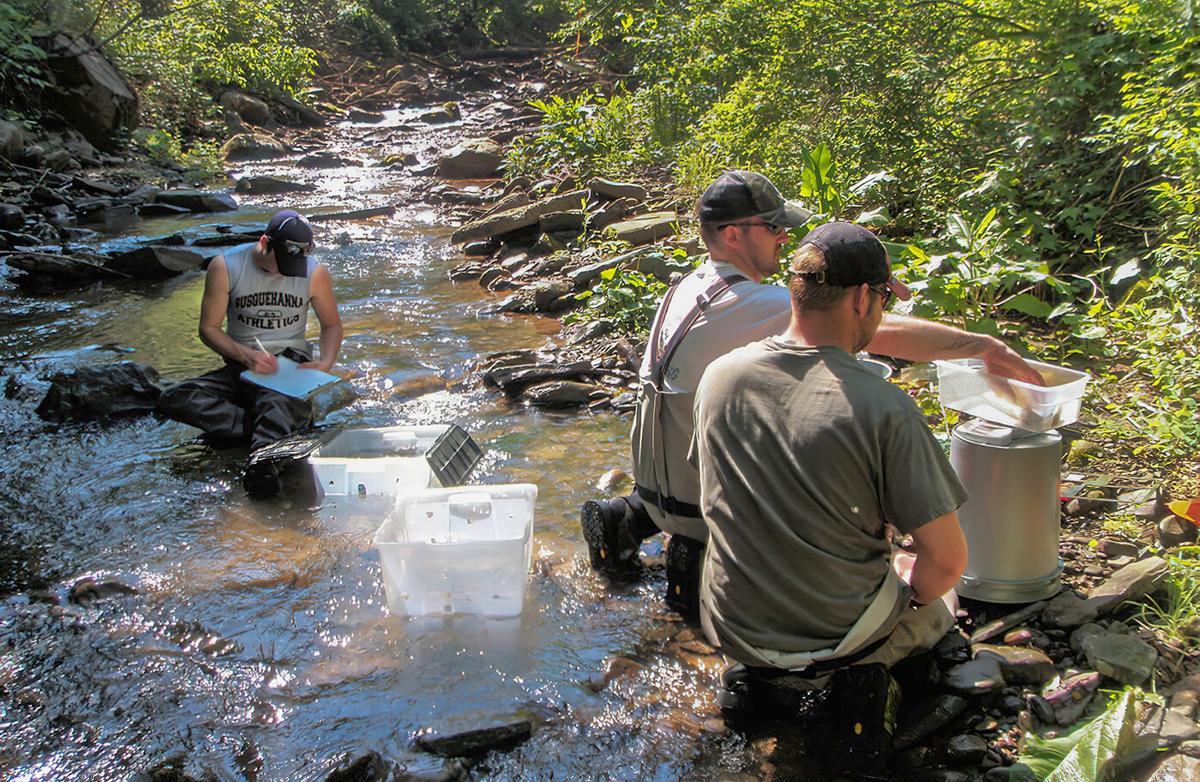 Scientists with the Susquehanna River Basin Commission measure the health of a Pennsylvania stream where water is withdrawn to support natural gas drilling. 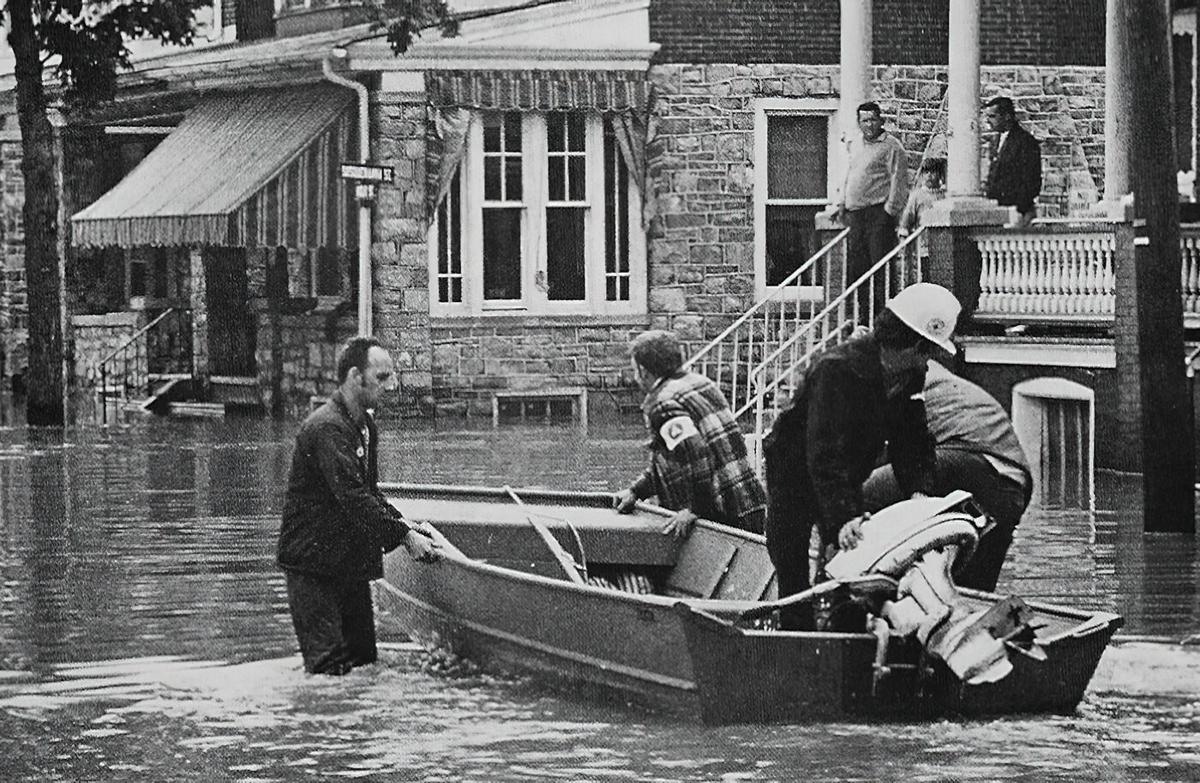 A boat navigates a flooded street in Harrisburg, PA, after Tropical Storm Agnes brought record flooding in 1972. Flooding along the Susquehanna steered the work of the commission it its early years.

It may seem odd that anyone would worry that the largest river on the East Coast, which discharges an average of more than 18 million gallons into the Chesapeake Bay every minute, might run out of water.

But a half century ago, concerns that the Susquehanna River might not have enough water to go around weren’t far-fetched: Largescale drinking-water withdrawals from cities like Baltimore and Chester, PA, were raising red flags.

And, the Three Mile Island and Peach Bottom nuclear plants were under construction and another one, the Susquehanna Steam Electric Station near Berwick, PA, was planned. Each would suck out vast amounts of water for cooling.

“Having just struggled with record low flows in the prolonged 1962 to 1966 drought, there was a real concern among the states that the new diversions and power plants would use more water than the river could sustain during a dry summer,” said Andrew Dehoff, executive director of Susquehanna River Basin Commission. “And there was an awareness of the need for adequate freshwater flow to the Chesapeake Bay.”

The solution was to create the Susquehanna River Basin Commission. A regional compact between Pennsylvania, Maryland, New York and the federal government launched the commission as an independent agency that was given broad powers and duties to manage the many water users in a river basin as large as South Carolina.

The commission’s early efforts were aimed at regulating water withdrawals to protect against droughts and setting up early warning systems to protect against floods. But the commission, now marking its 50th anniversary, has played pivotal roles in other issues, including detecting invasive fish species, restoring degraded watersheds, addressing mine drainage issues, and keeping tabs on the impacts of fracking for natural gas in the Marcellus Shale.

Following orders set up by member states and the federal government, the SRBC has to both encourage the use of the river’s water and protect the ecological functions of the nation’s longest commercially non-navigable waterway.

“The basin’s land and water are interconnected in ways that invite strong sensitivity to development activities,” Dehoff said. “When we disrupt the harmony without appropriate management and planning, vital resources can be depleted.”

The SRBC is also an important partner in the Chesapeake Bay cleanup. The Susquehanna provides the Bay with half of its freshwater — and is the largest single source of its nitrogen and sediment pollution.

The SRBC has faced criticism over the years. It has been accused of usurping states’ rights and being “unchecked government.” Anti-fracking protesters once took over a quarterly meeting, and some Pennsylvania legislators have pushed to undermine its enforcement powers and ability to assess fees on water users. The New York legislature once cut its financial support in half after the SRBC started limiting water withdrawals by golf courses. And the states, which provide about 6% of the commission’s annual $11.9 million budget, tend to reduce funding when budgets get tight.

But in the eyes of many, the SRBC has performed admirably in protecting communities from flooding and making sure there is enough water, both on the surface and in the ground, to go around. Those are complex tasks. It’s been estimated that a raindrop falling in Susquehanna headwaters near Cooperstown, NY, may be withdrawn and used seven times before it gets to the Chesapeake Bay.

“They deal with a huge issue in a reasonable and responsible way,” said Pennsylvania state Sen. Gene Yaw, who serves on the interstate Chesapeake Bay Commission, an advisory panel that represents state legislatures.

“When you have a basin that covers that size of land mass and so many people, and you field so few complaints, it’s a pretty good indicator that they’re doing what they are supposed to.”

Added Cindy Adams Dunn, secretary of the Pennsylvania Department of Conservation and Natural Resources, “A river this magnificent requires cohesive management, and SRBC has done a phenomenal job over its 50 years of existence to provide the signatory states with the science and tools to manage the flow and quantity as a system.”

Yet, despite being the arbiter of a precious resource for 4 million people, the actions of the SRBC and its 62 staff members remain unknown to many.

Though founded to ensure an adequate water supply, the SRBC quickly had the opposite problem. Only 18 months after President Richard Nixon signed the law creating the commission on Christmas Eve 1970, Tropical Storm Agnes wreaked havoc by dumping up to 19 inches of rain, causing some of the worst flooding ever experienced along the Susquehanna. In Pennsylvania, 48 people were killed, 569 bridges were washed out and damage totaled more than $2 billion.

Hurricane Eloise followed in 1975, driving more than 20,000 residents from their homes.

The events dictated the SRBC’s focus for years to come. It created maps for 250 communities, showing which buildings were likely to be flooded at various flood levels. The maps helped homeowners qualify for flood insurance and flood victims qualify for federal aid.

In the 1980s, the commission worked with the National Weather Service, U.S. Geological Survey and Congress to launch a state-of-the-art early flood warning system using real-time rain gauges and radar and satellite transmissions.

It’s one of several monitoring systems that help the commission keep tabs on the river. An 80-station water monitoring network established in 2003 continuously checks water quality and alerts public water suppliers of spills or other pollution events. That system has been put to use several times, such as a 2015 incident when a fire broke out at a chemical and fertilizer warehouse in York County. Alerts warned water utilities to switch to alternate supplies before contaminants reached their intake pipes.

Ensuring water for all

In the mid-1970s, the commission began regulating entities that draw, but do not return, large amounts of water from the river and its tributaries — such as nuclear and coal-powered plants, drinking water treatment systems, manufacturers and large agricultural users.

The goal was to ensure that enough water remains in the river during droughts to sustain industry, provide drinking water and protect aquatic resources, such as fish and the tiny creatures they eat. The commission has imposed water rationing and mandatory bans on nonessential uses of water during dry periods.

In 1978, the SRBC began regulating groundwater withdrawals as well.

“Without a check on the quantity and rate of water withdrawals, we would see the permanent loss of groundwater supplies, degraded water quality and habitat, and severely reduced stream flows,” Dehoff said.

When flows drop below a certain level, consumptive water users have to either cut back on withdrawals or pay for make-up water to be released elsewhere. Increasingly, those releases have come from two water reservoirs owned by the U.S. Army Corps of Engineers in New York and Pennsylvania. But other sources can also be tapped, including an old rock quarry near the lower Susquehanna and untainted water that has filled some old underground coal mines.

Drilling for natural gas by underground hydraulic fracturing, or fracking, has been controversial in the Susquehanna watershed, 85% of which sits atop the Marcellus Shale gas deposit.

New York and Maryland have banned fracking. The SRBC’s counterpart, the Delaware River Basin Commission, first put a moratorium on the practice, then banned it in late February.

But SRBC took a markedly different stance, viewing fracking as an allowed water withdrawal by a business.

“Fundamentally, SRBC didn’t pass judgement on whether a proposed water withdrawal was good, bad or indifferent,” said Paul Swartz, who served as executive director from 1992 to 2013. “We looked at natural gas as a legitimate business interest in the basin.”

“Those opposed to natural gas viewed us as enablers. The water use is what we had to consider, not fracking.”

But the SRBC did recognize that water withdrawals for fracking posed risks, especially for smaller, high-quality streams, because the practice requires large amounts of water that would not be returned.

Many of those streams had never been sampled before, so there was no benchmark to gauge whether fracking was harming them or not. So, in 2009, the commission deployed a network of 60 real-time water monitoring devices to detect subtle changes in water quality in remote streams and smaller rivers.

If problems are found, an alarm triggers an investigation. In 2011, for example, a release of drilling mud at a gas pipeline stream crossing set off alarms, and state environmental and fish agencies were called to investigate.

In addition, metals, nutrients, ions and radioactive materials are sampled on a quarterly basis. The SRBC conducts surveys to look for effects on fish, water insects, wildlife habitat, recreation and water flows.

Gas drilling is now the third-largest water user in the basin, behind public drinking water suppliers and power plants. Drilling companies have been fined for erosion violations at well pads and access roads. But, after 10 years of water withdrawals and drilling operations, the SRBC says it “has not detected discernible impacts on the basin’s water resources.”

Today, the SRBC’s monitoring network is among the largest basin-specific, real-time water quality monitoring systems in the nation. And it has helped find problems unrelated to fracking. For example, it has shown that two high-quality streams are slowly becoming saline from the use of road salt on Interstate 80.

The SRBC has embraced projects and technology not imagined when it was created a half-century ago.

For example, SRBC scientists have used environmental DNA — unique codes left in the water by organisms — to confirm the presence of potentially harmful invasive species. They have used the technique to screen for didymo or “rock snot” (a form of algae that can form dense mats), round goby fish, northern snakeheads and blue catfish.

The commission also has been working to bring back the American eel in the Susquehanna and beat back nonnative species such as rusty crayfish and quagga mussels.

Its monitoring networks are used to measure both the amount of nutrients and sediment flowing down the river to the Bay and the successes or failures of conservation practices. Watershed groups use the monitoring data to measure the success of their stream projects.

After 50 years of management, “we’re in much better shape with regards to warning and preparing our basin citizens of hazardous flood conditions, providing for adequate water supply to both basin users and our aquatic ecosystems and supporting the progress made improving water quality,” said Andy Gavin, SRBC deputy director.

After half a century, Gavin noted, “much work remains” to keep up with emerging challenges.