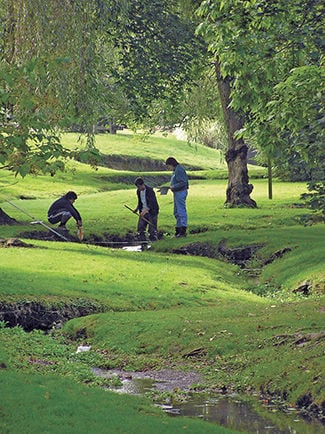 Streams in urban and suburban areas often look like this one in Pennsylvania: steep banks that collapse adding sediment and nutrients to the waterway. Stormwater runoff is one cause of these eroding stream banks as well as management such as mowing grass up to the bank, which offers soil no protection from eroding forces during storms. (Donna Morelli) 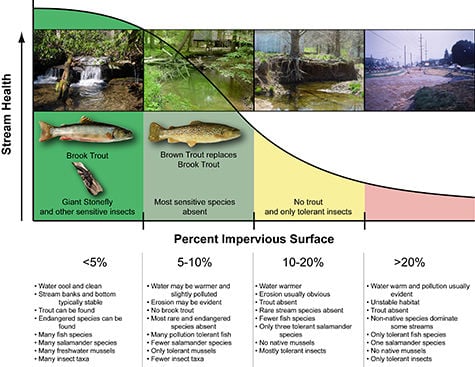 Stormwater pollution is the fastest growing source of pollution in the Chesapeake Bay, and in turn, of local waterways. As more farmland and forests are developed, more hard surfaces cover land where rain and snow could once infiltrate. As these impervious surfaces increase, more stormwater is created.

As rain falls on these surfaces, pollutants such as oil, gas, lawn fertilizer and pet waste are carried into local waterways. These pollutants are ultimately deposited into the Chesapeake Bay from more than 100,000 rivers and streams throughout the 64,000-square-mile watershed.

Why is stormwater a problem?

The same major contaminants that impair the Chesapeake Bay are problems in local streams as well: nutrient and sediment pollution, and fecal coliform from leaky sewers or animals. The bacteria can pose a threat to human and animal health. The nutrients spur algal blooms. In the Bay, excess algae die and sink to the bottom, where they decay, taking oxygen out of the water, often leaving too little oxygen to support fish, shellfish and other creatures. In severe cases, the oxygen is totally depleted, creating so-called “dead zones.”

What are impervious surfaces and how do they contribute to stormwater problems?

Impervious surfaces are hard surfaces like roads and roofs that rain or melting snow cannot penetrate. When forests and fields — which allow water to slowly seep into soil — are replaced with pavement, it contributes to more flooding, sediment-clogged culverts, the erosion of streambanks and roads, as well as higher costs to treat drinking water and other the impacts.

Streams flowing through areas with more than 5 percent of the land covered with roofs, roads and parking lots begin to show damage. As the percentage of development increases, streams become warmer and no longer support brook trout. The diversity of insects and other fish decrease. The steep eroded stream banks that commonly line urban and suburban streams are typical of streams with more than 10 percent impervious cover.

What is the impact of stormwater on local waters?

Stormwater can have a variety of impacts on local waters that have both economic and human health ramifications. These were a few cited in a 2008 National Research Council Report, Urban Stormwater Management in the United States:

What is a BMP?

BMP is an acronym for best management practice. A stormwater BMP is a practice that will help to reduce pollution to a water body. A BMP can be programmatic, like not washing salt trucks over a storm sewer, or it can be a project that slows and filters pollutants from stormwater

What is "green infrastructure"?

There are many different descriptions for green infrastructure, but generally it is an approach to managing stormwater that tries to mimic the natural water cycle. Before land is developed, rain and snowmelt slowly seeps into the soil of forests and fields, where much of the nutrients could be used by plants and trees.

With development, engineers add pipes and curbs to direct water from impervious surfaces to quickly move it away from buildings and roads. Green infrastructure uses rain gardens and tree plantings instead of, or in addition to, pipes to take up some of the water, similar to a natural system.

What are some examples of green infrastructure used to control stormwater?

Each of these examples can be considered a BMP — but it’s only a best management practice if it is installed where it makes sense. Maintenance of each of these methods should be considered before installation. All infrastructure, gray or green, will require some maintenance.

What is a Retrofit of a Stormwater BMP?

Retrofits are a group of practices that reduce pollution in existing buildings, parking lots or even lawns that have inadequate or no stormwater management. A common retrofit is replacing the grass in an old dry pond with good soil and trees and plants that will reduce pollution. Another is removing impervious surface from a parking lot and installing permeable pavers or concrete to allow stormwater to infiltrate the surface. Retrofitting a street with bump-out rain gardens is another opportunity to both manage road runoff and beautify the area.