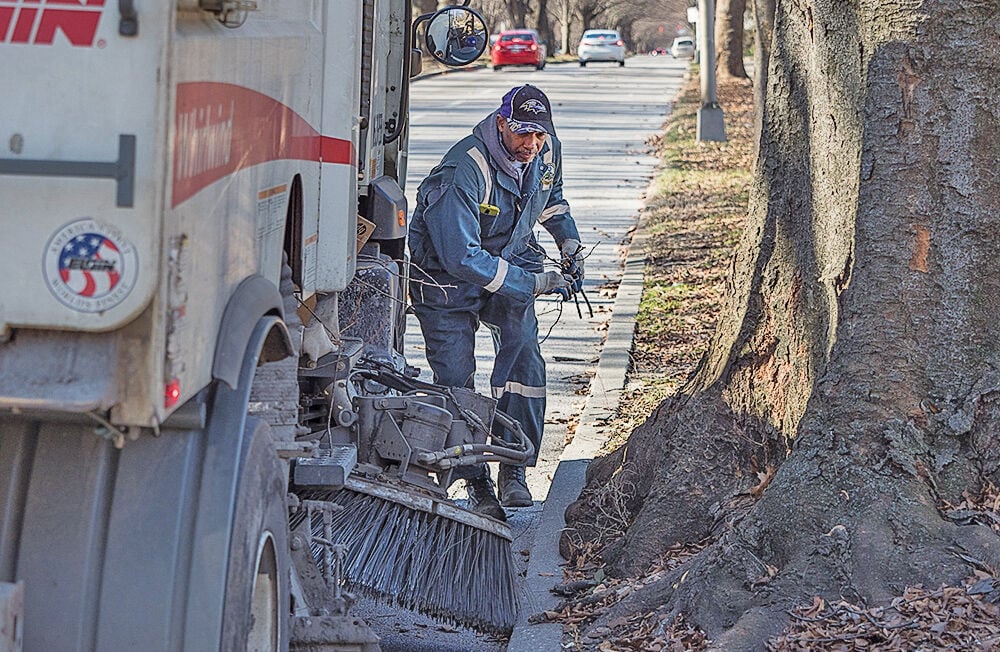 Baltimore city relies on vacuum-powered street sweepers, like the one shown here with its operator Alonzo Ames, to pick up dirt, litter, sediment and other pollutants. 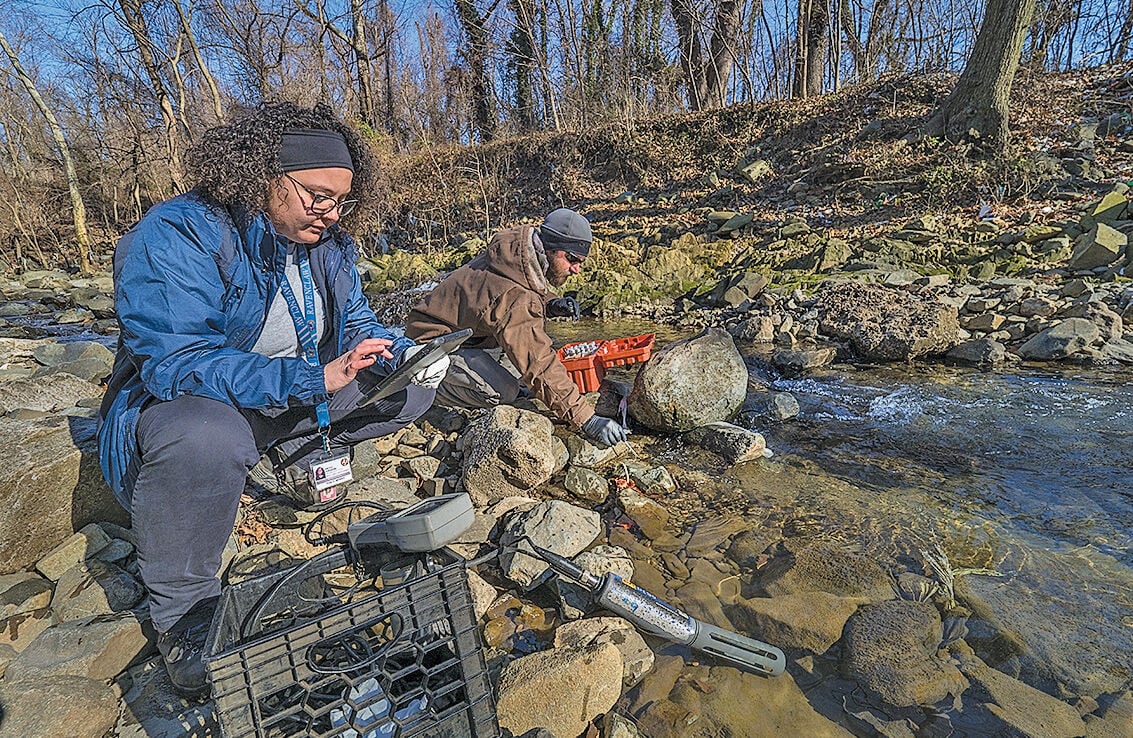 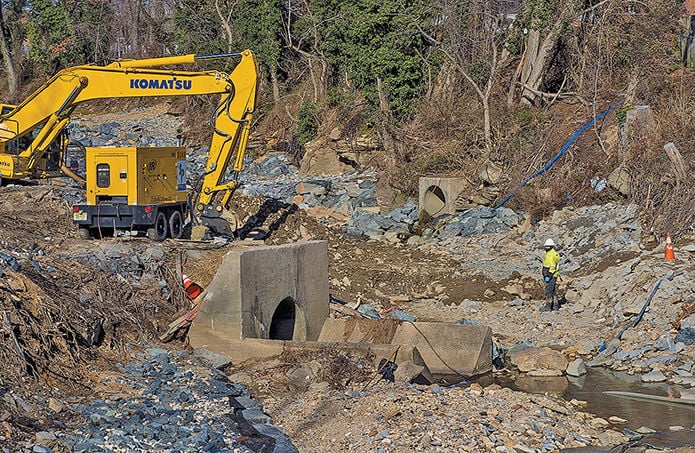 Construction crews restore Chinquapin Run in Baltimore city, moving a sewer line out of a channel and stabilizing banks. Trees planted along the stream by volunteers were taken out, but officials say the reductions in erosion and sewage leaks outweigh the loss.

Blue Water Baltimore and the Chesapeake Bay Foundation filed petitions Monday in city and county Circuit Courts seeking judicial review of stormwater discharge permits that were finalized in early November by the Maryland Department of the Environment.

These MS4 permits (shorthand for “municipal separate storm sewer system”) require localities to reduce pollution and flooding caused by rainfall running off buildings and pavement. Under the federal Clean Water Act, the MDE is supposed to review and reissue them every five years. The MDE also issued permits in November to Anne Arundel and Montgomery counties.

Blue Water Baltimore said that its water quality monitoring over the past decade shows previous stormwater measures required by the MDE have failed to improve the health of area streams and the harbor. The new MS4 permits are likewise flawed, the organization says, because they don’t emphasize streamside tree plantings and other natural stormwater management practices that would both ease flooding and reduce pollution.

In recent years, there has been growing evidence that climate change is causing increasingly intense downpours and flash flooding, the two groups say.

A law passed in 2021 requires the MDE to assess the latest precipitation and flooding data and update its stormwater control requirements. The department issued a report in November outlining plans to work with all affected parties during the next year and adopt new regulations in 2023. The groups say the MDE shouldn’t wait to begin requiring more runoff controls.

“Residents of Baltimore City and Baltimore County have felt the impacts of the increased intensity of storms due to climate change,” said Josh Kurtz, the Bay Foundation’s Maryland executive director. “MDE’s failure to adequately address climate change in these permits will likely lead to even more damage to both human health and the health of our waterways in the future.”

Baltimore city and Maryland’s 10 biggest suburban counties had struggled to fulfill the requirements of their most recent MS4 permits, particularly the mandate that they capture or treat the runoff from 20% of their built surfaces. Local officials cited the costs and logistical challenges involved. All but one jurisdiction — Prince George’s County — succeeded, though not without help from the MDE. State regulators allowed Baltimore city officials to rely on street sweeping, for instance, as a less costly alternative for treating runoff. They also significantly boosted the credit awarded for reducing stormwater pollution through stream restoration, likewise reducing the number of such costly, complicated projects a locality would have had to complete by the five-year deadline.

The new permits ease that requirement, calling on the large localities to collectively treat runoff from another 10% of their built surfaces, approximately, at the overall rate of 2% per year. Though only half the rate required in the previous permits, MDE officials point out that it’s a cumulative increase in management because the localities must still maintain treatment measures taken earlier.

The new permits also allow continued reliance on street sweeping and stream restoration, though the use of the former is capped. MDE officials say research shows both can be effective at reducing nutrient and sediment pollution, a contention disputed by some.

In any case, the two groups say there’s too little emphasis in the permit on measures that would address not just the pollution from stormwater but the flooding caused by increased runoff.

“At the end of the day, street sweeping isn’t going to do anything to reduce stormwater runoff or keep our neighbors safe from flooding,” said Alice Volpitta, Baltimore Harbor Waterkeeper, which is part of Blue Water Baltimore. “And without better permits, municipalities are going to keep putting on a bandage instead of investing in real change. MDE needs to be leading the way into the future, not maintaining the status quo.”

The groups also take issue with the different targets given to each jurisdiction for treating runoff from buildings and pavement. MDE officials said they adjusted each locality’s target based on an assessment of its circumstances, including the geography, density of development and financial resources.

But the permits place a much bigger burden on financially strapped Baltimore city than on its wealthier neighbor, Baltimore County, the groups point out. Baltimore city would be required to treat more than 3% of its built landscape annually, while Baltimore County’s target is substantially below the 2% overall target for all the large localities.

The group contends that disparity lets “upstream communities, often white and affluent, to save money by making fewer environmental investments, to the detriment of downstream neighbors, including those in Baltimore city.”

In response to the groups’ legal challenges, MDE spokesman Mark Shaffer said the agency “has worked closely with all interests to keep making progress for clean water, green infrastructure, climate resiliency and equity in the new permits. We understand some groups wanted more, just as some groups wanted less based on concerns about affordability and achievability. MDE will continue to work with all groups and focus on the need for timely implementation.”