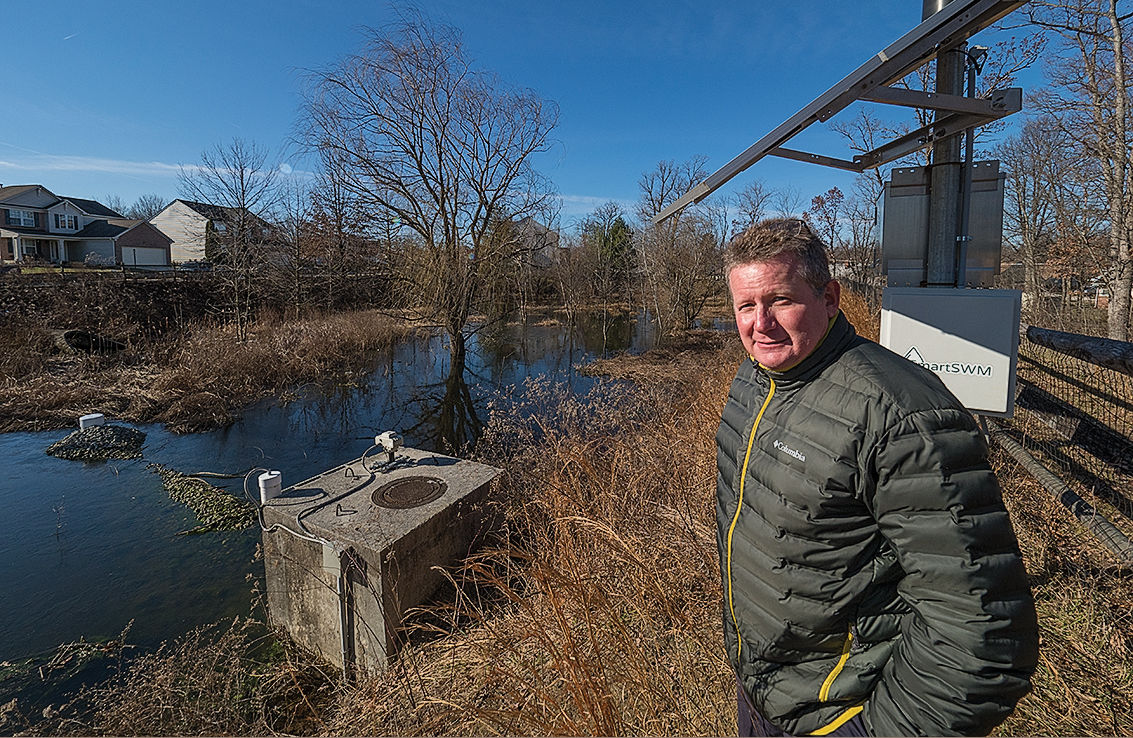 Engineer Bob Bathurst overlooks a stormwater pond that his company retrofitted in suburban Windsor Mill west of Baltimore. “This is going to do wonderful things,” he said of smart-pond technology, especially for existing stormwater facilities “that are out there, already paid for and underperforming.” 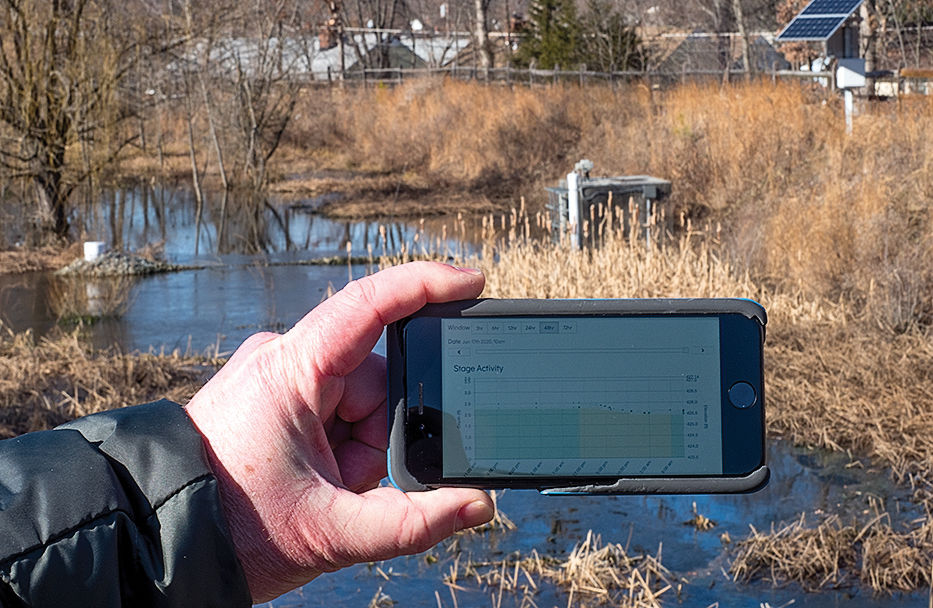 Smart stormwater ponds can be monitored and even manually operated remotely. Engineer Bob Bathurst shows a graph on his phone screen depicting how water level in one pond had been lowered in advance of a deep freeze to the reduce risk of drowning if someone stepped onto the ice and it broke.

One of the oldest methods for capturing runoff, the stormwater pond, is getting a digital makeover. It no longer simply collects rainfall washing off pavement and lawns. The new version anticipates precipitation before it begins and adjusts itself to reduce downstream pollution and flooding.

Welcome to the dawn of “smart” stormwater management.

A few dozen runoff collection ponds that were built years ago in the Chesapeake Bay watershed have already been retrofitted to “smarten” them up. Equipped with real-time sensors and cloud-based controls, they remotely release or retain stormwater in response to online weather reports. More — likely many more — are on the way.

“I think we’re on the cusp of a great transformation,” said David Rubinstein, chief executive officer of Opti, who said his Massachusetts-based company has built 150 smart ponds in 20 states. It has 18 so far in the Bay watershed, most of them in Maryland.

Others are more cautious, but still optimistic about the promise of the new technology.

For the last 30 to 40 years, Schueler said, engineers have been relying on gravity alone to capture and treat runoff, mainly to control flooding and stream erosion. Dry and wet stormwater ponds pepper the landscape across the Bay watershed, where they passively collect and hold runoff whenever it rains.

But just as the “internet of things” has transformed daily life in other ways, from smartphones to smart appliances, web-based technology is offering a new way to deal with stormwater, one of the leading sources of pollution in the Chesapeake.

Runoff carries dirt, fertilizer, pet waste, oil, chemical contaminants and litter into nearby streams. It accounts for 16% of the nitrogen, 18% of the phosphorus and 24% of the sediment fouling the Bay, according to the state-federal Chesapeake Bay Program. Reducing stormwater pollution has proven to be difficult, as development spreads more runoff-inducing rooftops and pavement.

Local and state agencies have turned increasingly to restoring eroding stream banks in an attempt to reduce the flow of sediment and nutrients washing into the Bay from existing development. Those projects have proven to be costly and varied in effectiveness.

“A lot of the money we’re spending now is to fix the sins of the past,” said Bob Bathurst, a principal with Century Engineering, a Hunt Valley, MD, firm that also works on smart ponds. “The stream channel erosion that’s ongoing, unless we control the runoff rate, we’re going to continue to have it.”

Schueler said he sees wired, actively managed smart ponds as complements to stream restoration projects. They can curb the surge of runoff that erodes stream banks, he said, and can enhance the pollution-trapping performance of old stormwater basins 25–50%, . They can also reduce the frequency or severity of downstream flooding from intense rainstorms.

“You have potentially tens of thousands of older stormwater ponds in the upland areas where this treatment can take place,” Schueler said.

It doesn’t take a lot to convert an old pond into a smart one. A sensor placed on the bottom monitors the water level, while an electronically activated “actuator” is used to open or close a butterfly valve installed in the pond’s water release outlet. A microcomputer connected to the internet collects water-level and weather forecast data and manipulates the release valve.

“It’s all automatic,” Bathurst explained as he surveyed a large pond his firm converted a couple years ago in the suburban Windsor Mill area west of Baltimore.

When heavy rain is forecast, Bathurst said, the control system calculates the amount of runoff that’s expected to flow into the pond. A signal is sent over the internet to open a valve at the pond up to 48 hours in advance of the precipitation. The pond level drops as the water is gradually released into a nearby tributary of the Gwynns Falls, until there is enough storage created in the basin to accommodate the projected accumulation without overflowing.

“So then, when it rains, other parts of the watershed are contributing to downstream erosion and flooding,” Bathurst said, while the smart pond “acts like a receiving vessel.” It holds onto its runoff rather than adding to the flooding and the rush of polluted water downstream.

Once the storm has passed, Bathurst added, the pond can hold onto the water for as long as it takes — or at least until the next deluge approaches — to settle out as much sediment and nutrient pollution as possible.

The status of the pond is monitored on a digital dashboard that Bathurst can access with his smartphone. “You can see it’s in a retaining status right now — we’re not discharging,” he said, holding up his phone screen. Should anything go wrong, like a stuck valve, he said, the system sends an alert, so a repair crew can be dispatched.

The pond control system also adapts to seasonal conditions. In winter, when a deep freeze is forecast, the water depth is lowered to two feet or less for safety reasons. Though the ponds are fenced off, it’s all too easy for someone to sneak in. But with the water drained down, there’s less chance a trespasser could break through the ice and drown. Likewise, in summer, pond levels can be manipulated in an attempt to limit mosquito populations.

Wired or not, the ponds still serve as neighborhood wildlife refuges. “I saw my first wood duck after we retrofitted a pond,” Bathurst said.

Smart pond technology was developed six or seven years ago, according to Stuart Schwartz, a senior research scientist at the University of Maryland, Baltimore County. He said it’s a natural extension of internet-connected systems that have been developed to operate wastewater treatment plants and water reservoirs.

Even so, he cautioned that smart-pond technology is no cookie-cutter panacea for curbing polluted runoff. Not every stormwater pond is a candidate for retrofitting, and there are other logistical, legal and political complexities that have held back a rush to install it.

“Every pond has a different drainage area and runoff potential and storage,” he said. Their effectiveness also depends on the reliability of weather forecasts. It’s a question, he concluded, of finding that “sweet spot” where a pond is big enough or can be manipulated enough to provide significant stormwater retention, even in intense downpours.

Smart ponds have other challenges, which are relatively easy to deal with. If the power goes out or the internet goes down, the gear is preprogrammed to keep the valve closed, and the pond performs much like an old passive detention basin. Most ponds are solar-powered, though, with batteries on site to provide electricity during the night and on cloudy days. There is also the risk of vandalism, which could impair their activities.

The other hurdles to rapid deployment are more systemic. There are 65,000 privately owned stormwater ponds in the Bay watershed, by the U.S. Environmental Protection Agency’s estimate. But private landowners often have no incentive to upgrade passive ponds, and government traditionally shies away from investing public funds to enhance private property.

Nonetheless, the Maryland Department of Transportation sees great potential in the new technology, said Sandy Hertz, assistant director of the department’s office of environment. Her agency owns about 800 ponds that could be retrofitted, but it has been waiting for state regulators to verify the technology’s effectiveness before taking the plunge with its own facilities.

The department announced a public-private partnership in November, though, where it pledged to pay $4 million to facilitate smart stormwater ponds at four Wal-Mart and Sam’s Club stores across Maryland. Opti, the Massachusetts-based company, forged a partnership with The Nature Conservancy to make the retrofits and oversee the facilities’ operations for 20 years.

The department won’t actually be financing the retrofits directly. Instead it will be buying credits from the partners that will help it meet its regulatory requirements to treat stormwater runoff from thousands of acres of highway pavement. Transportation officials said they’ll be saving money that way. The credits will cost about $37,500 per acre, one-fourth of the $150,000 per acre the state has paid to put in runoff infiltration swales, bioretention cells and stormwater ponds.

“Stormwater is one of the biggest problems facing the Chesapeake Bay right now,” noted Mark Bryer, Chesapeake Bay Program director for The Nature Conservancy. “It’s the only source of pollution that’s increasing, and this partnership is an opportunity to reverse that and actually save money at the same time.”

When the deal was announced last fall, Ben Grumbles, Maryland’s secretary of the Department of the Environment, called it “a sneak peek into the future, the future of stormwater management around the country.” Diana Esher, the EPA’s deputy mid-Atlantic regional administrator, echoed that, describing the arrangement as a national model the federal agency hopes to see spread.

Bathurst said that he envisions a time when all the stormwater ponds in a stream watershed are wired in a network, and their retention and release is coordinated to minimize water-quality impacts. Opti’s Rubinstein said his company is exploring a beta version of that now with a municipality elsewhere in the country.

“I would never dare say this is the only solution,” Bathurst said. “It’s just that this is going to do wonderful things, particularly as it relates to existing stormwater ponds that are out there, already paid for and underperforming.”