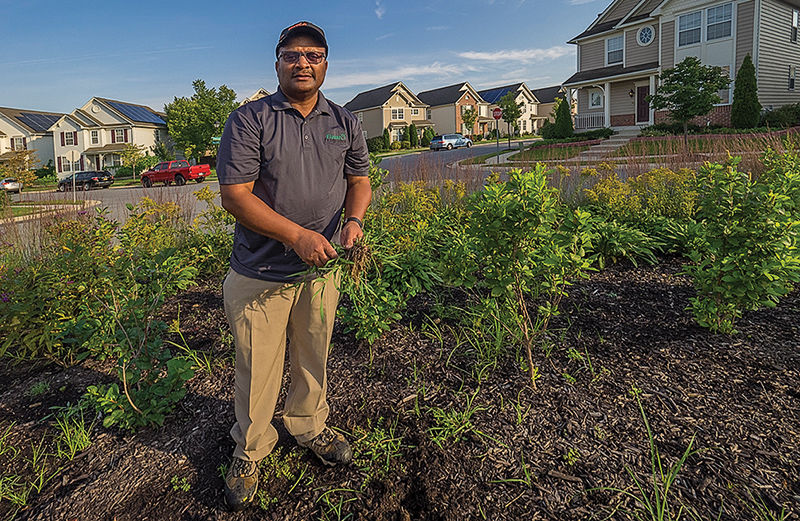 Purnell Glenn, president of the Miramar Landing Homeowner’s Association, stands in one of the Bayscapes gardens he helped to plan and plant to help control runoff. 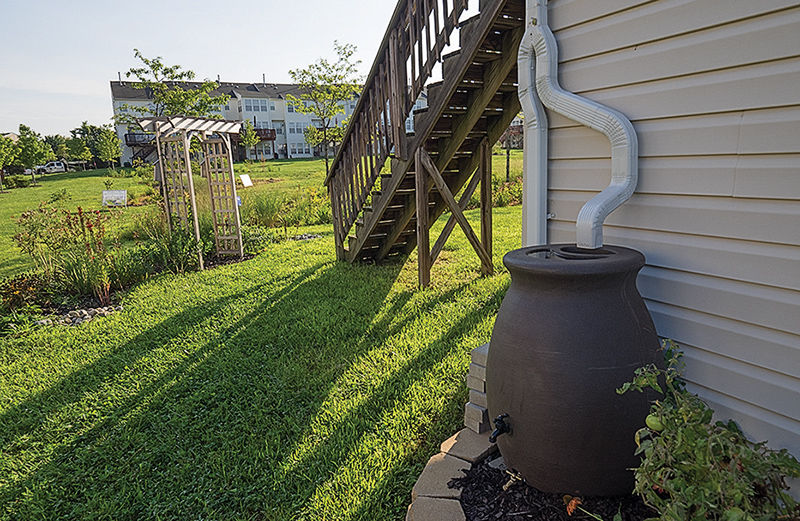 Several private homeowners have installed rain barrels to help stem the flow of runoff from their roofs.

Purnell Glenn, president of the Miramar Landing Homeowner’s Association, stands in one of the Bayscapes gardens he helped to plan and plant to help control runoff.

Several private homeowners have installed rain barrels to help stem the flow of runoff from their roofs.

You can’t see the water from Miramar Landing, but it’s not far away.

The 740-home community sits off Pulaski Highway in eastern Baltimore County, an area packed with restaurants, convenience stores, shopping centers and auto-repair places. The site was once home to military-style housing for thousands of defense workers, now razed. It was once so associated with nearby Martin State Airport that its streets were named for airplane parts.

Over the last decade, though, Miramar Landing has been rebuilt by Ryland Homes as a tidy, 101-acre subdivision of single-family homes and townhouses within commuting distance of downtown Baltimore. Its main streets are named for the waterways it borders — the Middle and Bird rivers.

The community boasts newly planted community gardens, graced with blue-eyed grass, asters and purple coneflower. These are rain gardens, which capture and absorb stormwater that would otherwise reach the streets and nearby streams.

Miramar Landing’s new green face is the fruit of $150,000 in grants and the elbow grease of community residents. The goal is to offset some of the polluted stormwater runoff flowing to the Chesapeake Bay and its tributaries from an ever intensifying wave of development.

Stormwater is the only growing source of pollution in the Bay watershed, and the political backlash against fees and other mandatory efforts to control it remains strong.

Baltimore County previously charged its residents a stormwater fee to help offset runoff with greening projects and infrastructure repair. Like many other counties, though, it has phased out the fee, effective this year. Now, the county compensates for the shortfall with other funding and by encouraging independent projects like Miramar, said Wesley Schmidt and Steve Stewart of the county’s watershed management division.

“It’s really just a great shining example of what communities can do,” said Schmidt, the watershed manager for the county’s east side. “It’s educated people in the community who might not have a chance to see the practices elsewhere.”

Over time, projects like this one make a big difference, said Stewart, who manages watershed monitoring for the county. The Back River has nearly met its benthic community goals — the number of small crabs, worms and fish that live in grass beds — and the Middle River has exceeded them.

But there are still challenges. Middle River was the site of a major fish kill two years ago that the Maryland Department of the Environment attributed to a harmful algae bloom caused by excess nitrogen and phosphorus entering the waterway from multiple possible sources. A high percentage of the watershed is covered with buildings and pavement, which increase stormwater runoff, and county reports indicate that the amount of impervious surface was expected to grow with redevelopment.

While it’s difficult to quantify how much projects like Miramar factor into the benthic improvement, Stewart said the county is “seeing progress” in highly developed areas like eastern Baltimore County.

Miramar Landing is the kind of community that nonprofit groups have been trying to reach in recent years: urban or suburban, of moderate income, diverse and close enough to water to have a big impact on its health. According to the Gunpowder Valley Conservancy, which managed the project, nearly half of Miramar Landing’s residents are African-American; about a quarter are Asian-American (mostly Filipino); and nearly a quarter identify as white.

Like many Baltimore area communities, Miramar Landing has both newcomers and families with local roots. People remember the industrial hum of Martin State Airport and the occasional foul air and water from activities there. Some also remember when the water was clear enough to see Middle River’s bottom.

The grant to Miramar Landing marks a change for the conservancy, which had been managing much smaller grants to a larger number of places. They decided to target Miramar, said conservancy program director Peggy Perry, to see if a large enough investment could make a real transformation

“It was very exciting,” she said. “We’d never done that before, and it was very successful. The impact is much greater when you have a significant amount of impervious surface going on.”

The greening project was launched because Purnell Glenn, president of the Miramar Landing Homeowners Association, wanted to protect local rivers from polluted stormwater runoff. Glenn hoped that common spaces in the new development — drab slabs of grass, a traffic circle, and a village green that wasn’t all that green — could be transformed into native plant gardens designed to take up runoff and beautify the neighborhood, too.

“I grew up in the city, but my family are farm people. I hunt and I fish. For me, the outdoors is important,” Glenn said.

The community association secured grants from the conservancy, Chesapeake Bay Trust, Baltimore County, Baltimore Gas and Electric Co., Maryland’s Department of Natural Resources and the National Fish and Wildlife Foundation. Combined with design and building help from the conservancy — and sweat equity from many of its residents — Miramar Landing has transformed itself.

It wasn’t easy. Past land use at the site had stripped away most of the top soil and compacted the deeper layers. What appeared to be sponge-like grass was really a thin layer of green on a semi-impervious surface.

“It was the worst place I’ve ever planted trees,” said conservancy vice president Charlie Conklin. “You needed a pickaxe.”

The village green gardens are designed to collect the rain as it falls, so that instead of washing into streets, driveways and eventually storm drains, it soaks into the ground and gets sucked up into the roots of the vegetation.

Around the corner, dozens of townhouse lots back into Biggs Square Park, a pleasant, verdant field ringed with designated children’s gardens. The conservancy has installed signs that identify plants and highlight the role of ladybugs in the garden. Anise gives the gardens a scent like black jellybeans. Nearly 30 redbud trees were planted.

Down another road, the former concrete traffic island is now a native flower garden. Some homeowners have rain gardens in their yards, with the conservancy covering 80 percent of the costs.

In all, the effort has resulted in 137 native trees on 1.25 acres of open space, 10 rain gardens, several rain barrels at private homes and four bioretention gardens — which are similar to rain gardens, but engineered to handle larger flows.

Community-based projects like these take place in urban and suburban areas throughout the Chesapeake region, and are often supported by grants and nonprofit organizations. In Maryland, Blue Water Baltimore has been working with other economically and racially diverse neighborhoods in the Patterson Park and Butchers Hill areas of Baltimore City to decrease impervious pavement and beautify alleys. Highland Beach, a Anne Arundel County community founded by African-Americans in the 1920s, has been active with shoreline restoration, rain gardens and energy efficiency projects for more than a decade. Ellicott City has been working with various nonprofit and for-profit entities on greening projects to protect themselves from devastating floods.

Lindsey Drysdale worked with the conservancy to install a rain garden in her home along Middle River Road near the community’s entrance. Her daughter Olivia, 5, and son Sean, 2, brought in caterpillars to raise; they released them as monarchs at both their own rain garden and the community garden.

“Both kids have been obsessed with watching the caterpillars grow and transform. I cannot stress what a great bonus side effect this has been to installing a rain garden,” she said. “We’re able to conduct a living science experiment in our home with little to no effort. It has been such an amazing learning experience for the kids.”

The plantings were finished about the same time that Glenn and his board received other hard-fought improvements after a dispute with their developer, including better lighting, sidewalks and more trees. Together, the projects make for an inviting community that may also help nearby streams and rivers.  It may be a drop in the bucket for a built-up landscape, but at least it’s a start for a community that is itself starting over.