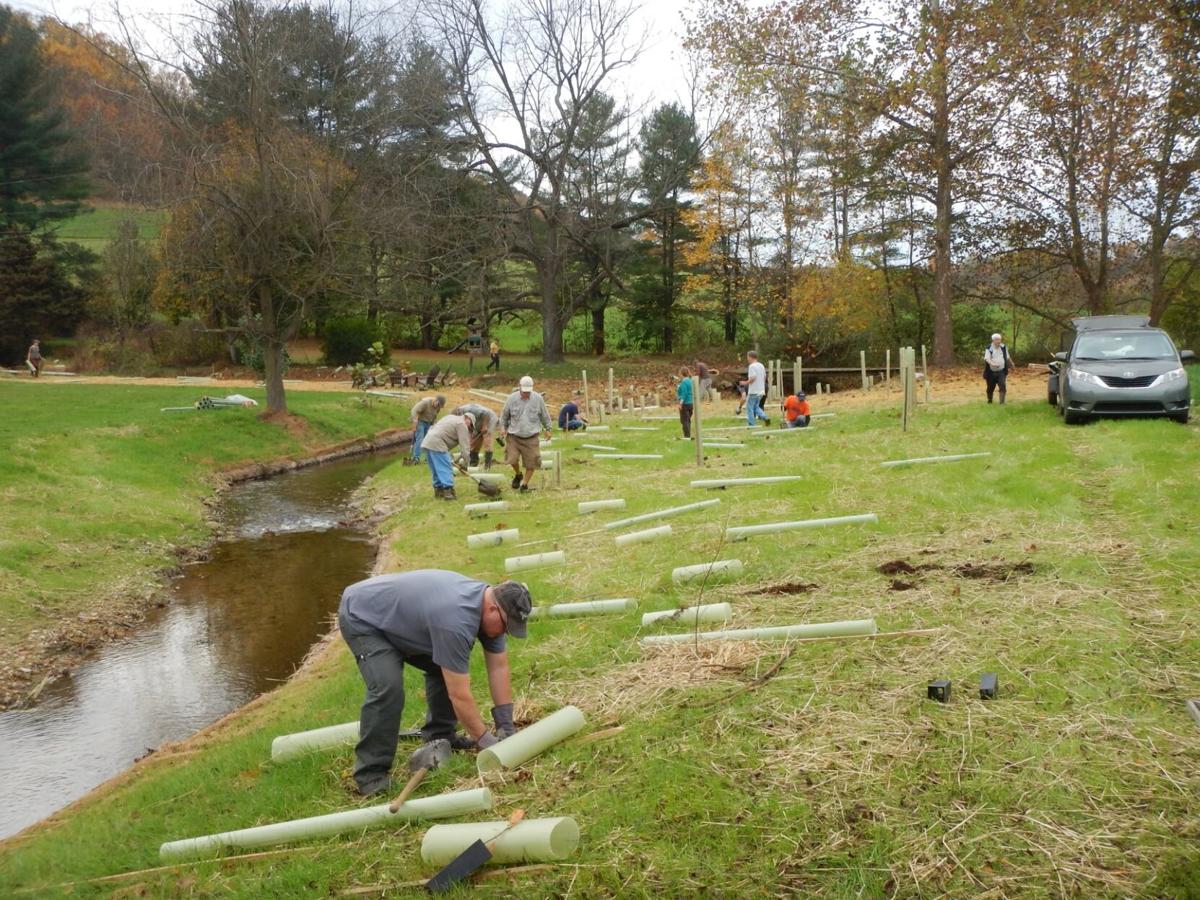 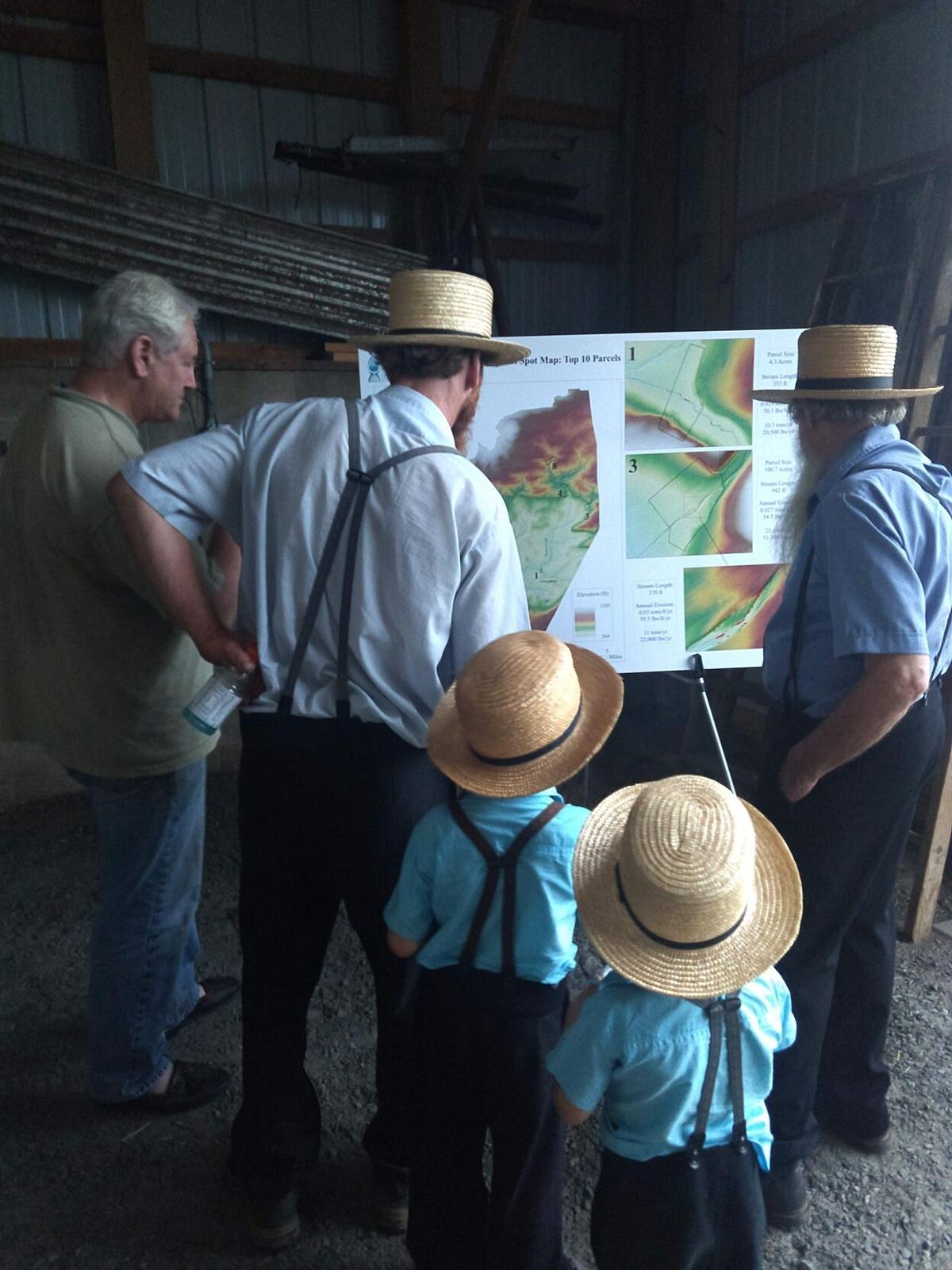 Plain Sect farmers gather for a demonstration on a farm in Lancaster County, PA, to learn about stream restoration opportunities as part of a new program that lets counties and local officials plan projects to reduce soil and nutrients as part of the Chesapeake Bay cleanup. (Lancaster Clean Water Partners)

In a major shift in strategy as the Chesapeake region nears its 2025 Bay cleanup deadline, Pennsylvania has switched to an approach that gives the reins and money to counties as they try to reduce large amounts of pollution from agriculture and stormwater runoff.

Counties are in the best position to make a difference at the local level, rather than an agency in the state capital, said the state Department of Environmental Protection, which has long overseen the cleanup. The agency wants to give counties a shot at forging solutions, figuring that they know the relevant stakeholders and can best track on-ground projects for accurate progress reports and pollution reduction credits.

The bottom-up cleanup plan is at the core of Pennsylvania’s latest watershed implementation plan, a federally mandated roadmap for meeting its share of the Bay cleanup commitments.

The new county battleplan began in 2018 with a pilot test by four southeastern Pennsylvania counties, which together send the lion’s share of nutrients into the Susquehanna River and Bay. Four more counties were added, and this year, with a few tweaks to the process, 26 other counties agreed to plan and oversee the cleanup work themselves. County conservation districts are major players.

The agreements by counties usher in a late and dramatic new effort to achieve Pennsylvania’s cleanup goals, an effort that is lagging far behind that of other states in the Bay watershed.

“It’s a sea change,” said Deb Klenotic, a spokeswoman for the state Department of Environmental Protection, of the countywide action plans, or CAPs, now in various stages of deployment.

At the heart of the new direction is the concept that people working at the community level are a source of strength. The idea behind the CAPs is that counties know best who to work with and where conservation practices, such as streamside buffers, manure storage, soil health, urban tree canopies and stormwater management projects, can be most cost-effective. That insight should help draw state financial support, which favors quick-turnaround projects that can be done in 12–18 months. Counties would also monitor streams to prove increased water quality.

“It’s a big difference. Stakeholders like conservation districts and watershed alliances had been used to implement projects, not brought to the table to make decisions,” said Jill Whitcomb, who heads Pennsylvania’s Chesapeake Bay Program for the DEP.

“I think that creates a whole new level of buy-in by engaging people from the very start.”

For its part, the DEP has streamlined its permit process and amped up technical assistance, and it now meets regularly with local officials.

Besides those official partners, more than 150 other state, federal and non-government organizations have gotten involved in the county, which is tasked with removing 11 million pounds of nitrogen and 500,000 pounds of phosphorus from streams, mainly originating from agriculture.

“There is no question that it is working and scaling things up and increasing the awareness of these goals and the collective effort needed to meet it,” said Allyson Gibson, director of Lancaster Clean Water Partners, the coalition that formed to lead the effort.

Projects have been both large and small. The congregation of a Mennonite church in Lancaster County repaved its parking lot with porous asphalt. In Cumberland County, officials started a cover crop incentive program and partly paid rental fees for no-till drills.

Another difference in the county-based approach is that conservation efforts are billed as a way to improve local streams rather than focusing on the distant Chesapeake Bay.

Cleaning up local streams will lessen flood risks, improve fishing and swimming, and enhance quality of life, DEP and county officials say. The slogan for the CAP program is “Healthy Waters, Healthy Communities.”

That focus on local waters has resonated in Luzerne County, where residents are smarting from fee increases, driven in part by the Bay restoration effort, to control stormwater runoff.

“People do sometimes have a hard time understanding how these regulatory changes affect them or why they should affect us, way up in the [Bay] watershed,” said Josh Longmore, director of the Luzerne County Conservation District.

The opportunities for local minds to brainstorm have given birth to new partnerships. The centerpiece of Lancaster County’s CAP focuses on intensively treating 21 stream segments that can be quickly upgraded to healthy status.

This “rapid delisting” concept came from the Chesapeake Conservancy, an Annapolis-based nonprofit. So far, the Lancaster Clean Water Partners have garnered $8.4 million in grants for the effort.

Because of the newness of the program and delays in projects stemming from COVID-19, it is too early to assess the success of the CAP program from stream-monitoring data.

Plus, funding on the scale needed to help Pennsylvania come anywhere close to meeting its pollution reduction goals by 2025 remains a huge uncertainty. The state’s latest Bay cleanup plan identified an annual funding gap of more than $300 million a year.

But state and county officials are convinced they have hit on a better way and are confident the local approach will accelerate efforts to restore both local waters and the Bay, though not totally by 2025.

“This program is not going away,” Whitcomb said.