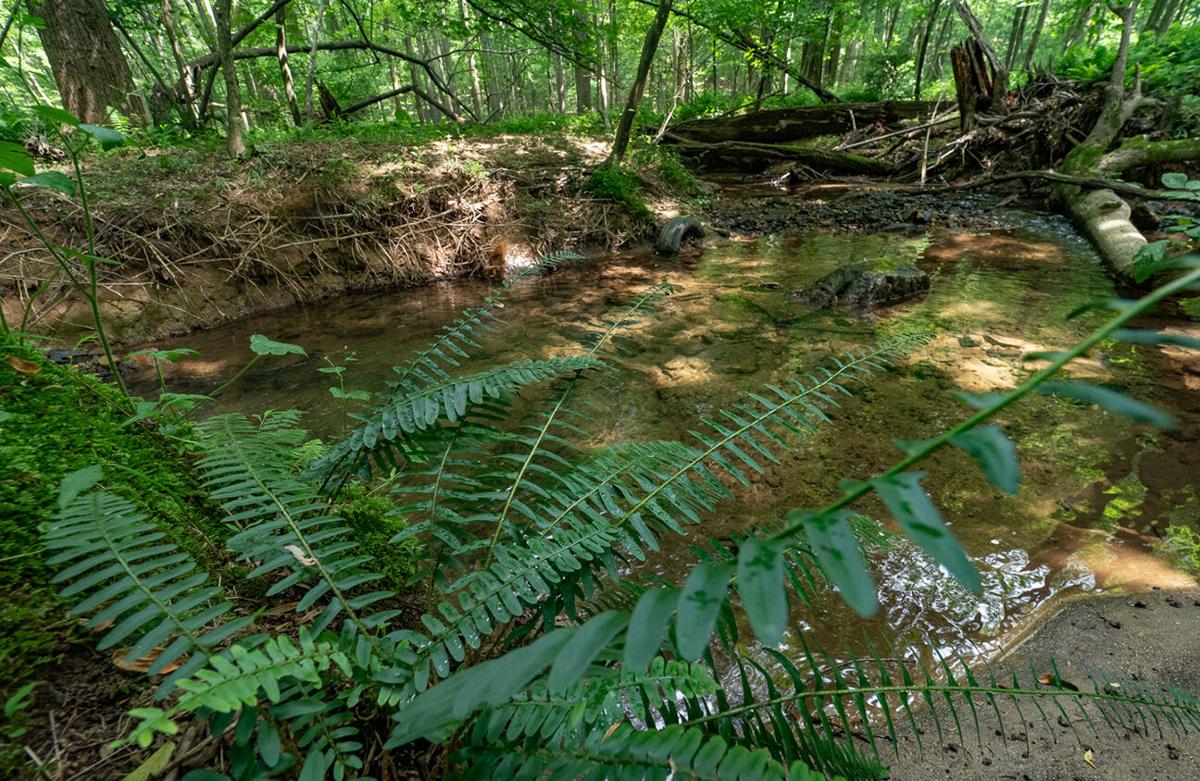 The Good Hope, pictured here, is a Maryland stream in the Anacostia River basin that, at least in recent years, has been a spawning ground for brown trout. The stream flows into Paint Branch, which is slated for extensive restoration work in the coming years. 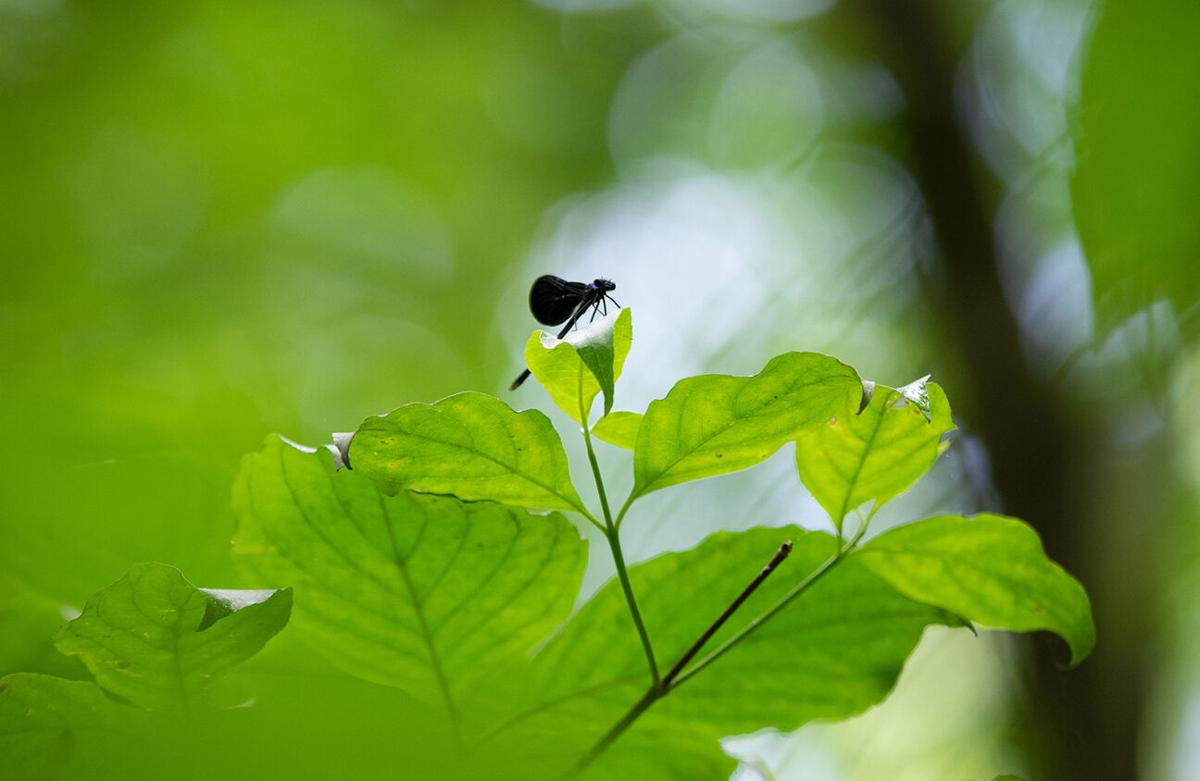 A damselfly alights on foliage along the headwaters of the Anacostia River. 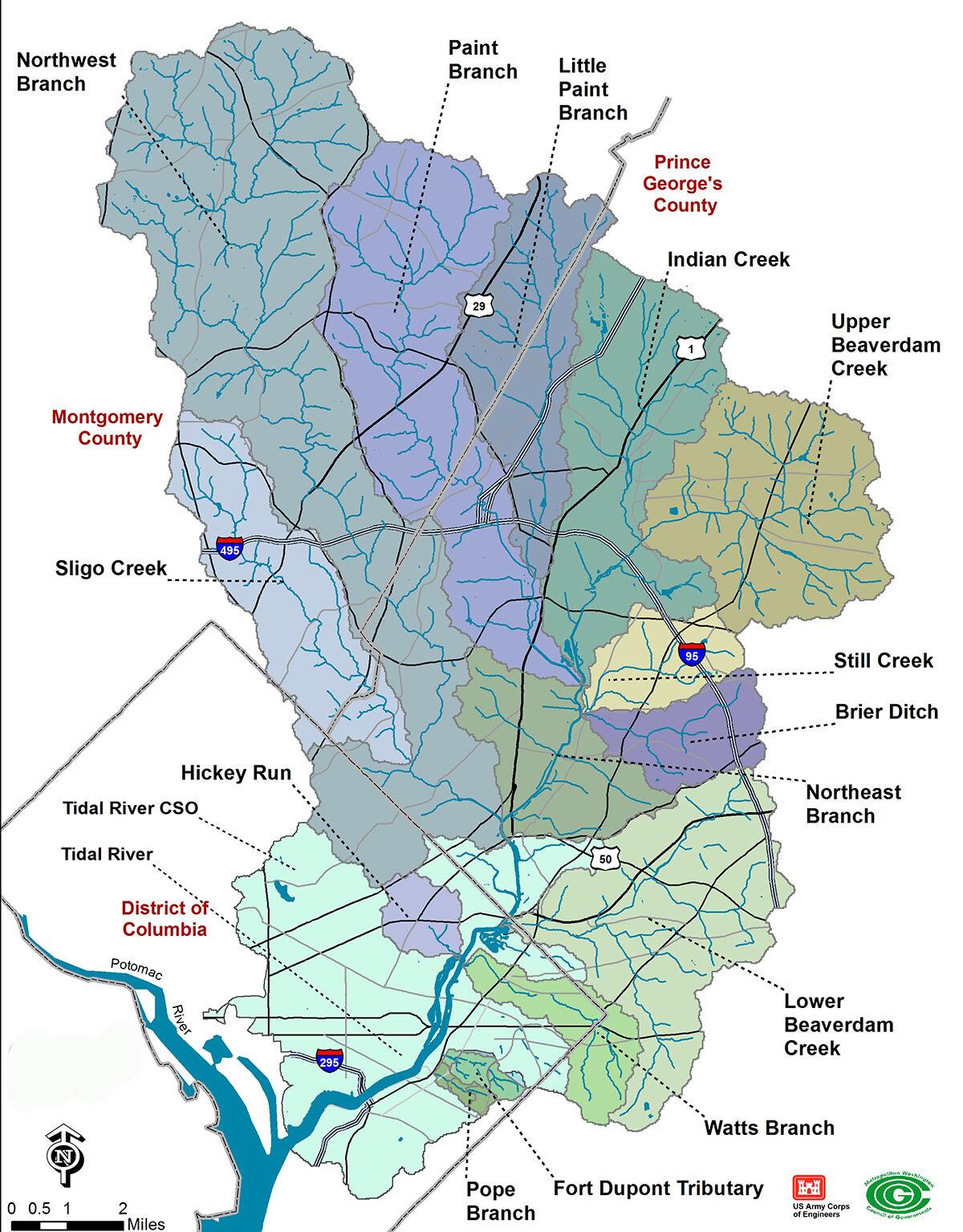 Federal and local governments are preparing to spend an estimated $34 million on stream restorations in two branches of the Anacostia River, which flows from Maryland headwaters into the District of Columbia. After years of planning, construction is scheduled to begin in the fall of 2022.

The U.S. Army Corps of Engineers split the $1.8 million study costs for the project with Prince George’s County, MD, where the work will occur. The majority of the federal funds approved by Congress for the project will be funneled through the Corps’ Baltimore District.

The work will restore 7 miles of stream habitat in the river’s Northwest and Northeast branches in Prince George’s County, MD. Removing blockages to fish passage will open up 4 miles of stream for species such as alewife and blueback herring to spawn and connect them to 14 miles of previously restored stream reaches.

“One of the major features of this project is [that it will] link all of those previous efforts and open up a larger corridor of restored streams, so the fish can travel farther upstream,” said Tham Saravanapavan, a project manager for the U.S. Army Corps of Engineers.

The $34 million expected to be spent on these second and third order streams encompasses about six major projects made possible by decades of collaboration between federal, state and local governments and other partners. They are some of the larger projects among the 3,000 that were first proposed for the river in a sprawling 2010 Anacostia Restoration Plan.

“The Anacostia River will never again be the pristine river watershed it was before development and urbanization,” the introduction to the 163-page plan states. “However, the watershed can and should be restored and protected to achieve environmental and ecological function and sustainability.”

Work to improve the Anacostia, which runs through populous Maryland counties and the District of Columbia into the Potomac River, began in earnest, like many clean water initiatives, in the 1970s. Lawmakers and local residents could no longer ignore the impact of “converting the natural landscape into an impervious, manmade landscape,” as Saravanapavan put it.

Since then, millions of dollars have gone toward retrofitting wastewater and sewer systems, reducing impervious surfaces and improving habitats in and around the river. Among the next major steps in the mainstem of the river is removing toxic sediment from the bottom of the river, where industrial pollution along its banks has left a legacy of contamination.

Chris Williams, CEO of the Anacostia Watershed Society, said stream restoration work in the upper reaches is an important piece of that big-picture puzzle. And, after decades of laying the groundwork, many of those major projects, such as toxics remediation, will be coming online around the same time.

“In order to make sure that the Anacostia system is top-to-bottom restored, you need to not only work in the mainstem but also in these tributaries that are sources of new pollutants,” he said.

If unrestored, upland streams can contribute excess nutrient and sediment pollution to the river. Gushes of stormwater from surrounding developed areas scour dirt away from stream banks and send it careening downstream. Reducing some of those hardened surfaces and adding rain gardens and retention ponds can reduce flows to waterways. That work, called best management practices or BMPs, has been underway for years in Prince George’s County.

“Upland BMPs are instrumental to anything that is done with the receiving waters,” said Frank Galosi, head of the county’s stormwater management division. “All that is collectively needed to address the issues. It’s all connected.”

Many of the smaller streams that feed the sections involved in this project have been previously restored. This effort will carry those benefits farther downstream to second and third order streams that are wider and often faster flowing — making the work more difficult. That is one of the factors driving the project’s cost, along with the sheer scale of the work, Galosi said.

The project will entail moving or working around infrastructure that blocks fish from traveling upstream, including old utility crossings and culverts. Removing blockages in the Northwest Branch and along Sligo Creek will increase access for alewife and blueback herring from about 20% of their historic habitat range to about 80%. In the Northeast Branch, those improvements will allow the fish to reach 90% of their historic range, compared with 10% currently.

Williams of the Anacostia Watershed Society said the work will benefit not just the fish but also the people who call this region home.

“These are urban streams,” he said, “but they are increasingly becoming an important part of the landscape to improve the livability of towns and communities.”

Stream restoration is a great goal of course. But in the face of the proposed projects of the SCMaglev, the relocation of the Bureau of Engraving and Printing Currency Production (BEP/CPF)Facility into agricultural lands of USDA, and the proposed Beltway widening this all seems a bit like "Rearranging the deck chairs on the Titanic". Interestingly, the Army Corps of Engineers is actively pursuing the plan to locate BEP/CPF on Beltsville Agricultural Research Center (BARC) and part of the USDA. The CPF will be an industrial facility of massive size demanding an enormous parking lot and requiring thousands of employees to travel by car to this heretofore agricultural setting. It requires expansion of roadways, impervious surfaces, and toxic runoff. Even the National Capital Planning Commission members were saying “we should know better” when considering just the parking lot and commuter demand of this project. Using previously developed land, such as the Landover Mall space would make infinitely more sense. Don’t use the pervious, forested, wetland and stream healthy Upper Beaverdam Creek Watershed. The SCMaglev is proposing that hundreds of acres of forests, parks, and green space be converted to impervious surface along with the devastation of streams and again, toxic runoff. These lands are throughout the train’s path - though huge swaths of USDA land are being requested for its train maintenance facility. All this so a few wealthy riders can travel a few minutes faster. The Beltway widening project will again increase impervious surface and cause more runoff. Is anyone balancing the budget of these impacts - will we come out better or are we building back to a downward spiral of simply more and more degradation. Projects of restoration and development should be required to work together to look at the cumulative impacts of all. The end product should reflect, as the Biden administration has coined, that we are Building Back Better. In this case I fear the balance sheet would read extremely red and we are building back to a loss. Susan Barnett, Greenbelt, MD

These efforts must be applauded, but unfortunately, there are so many proposed developments awaiting approval, e.g. the relocation of the Bureau of Engraving ( including a 1000+ car parking lot) from D.C. to the Beltsville Agricultural Research Center, I-495/270 rewidening, the SCMaglev, to name a few---all of which will eliminate and otherwise degrade rivers and streams throughout the watershed. So we need to end this unfettered development, or no amount of restoration will do the trick. As Geoffrey Haskett, President of the Nat'l Wildlife Refuge Association said:“We continue to fight for public lands that are under constant threat as we face enormous challenges to creating a sustainable future. We can no longer mitigate the erosion of

ecosystem services in highly developed areas such as the D.C. to Baltimore corridor. We need these lands not only for nature and people, but also for future generations who depend on us to make the right decisions.” More effort from the public is needed to speak out against the insanity!

This is much welcome news. I extend my thanks to all of those involved. Urban/suburban streams are the hardest to restore as they have suffered the most degradation over many decades, even 100s of years when considering historic farming and logging. But the benefits of these investments in restorations will not only improve the health of the streams and its critters, including 43 species of fish and some 200 species of birds, it will improve the lives of the 800,000 people who live in the watershed. Not to be overlooked, the restorations will also increase property values.