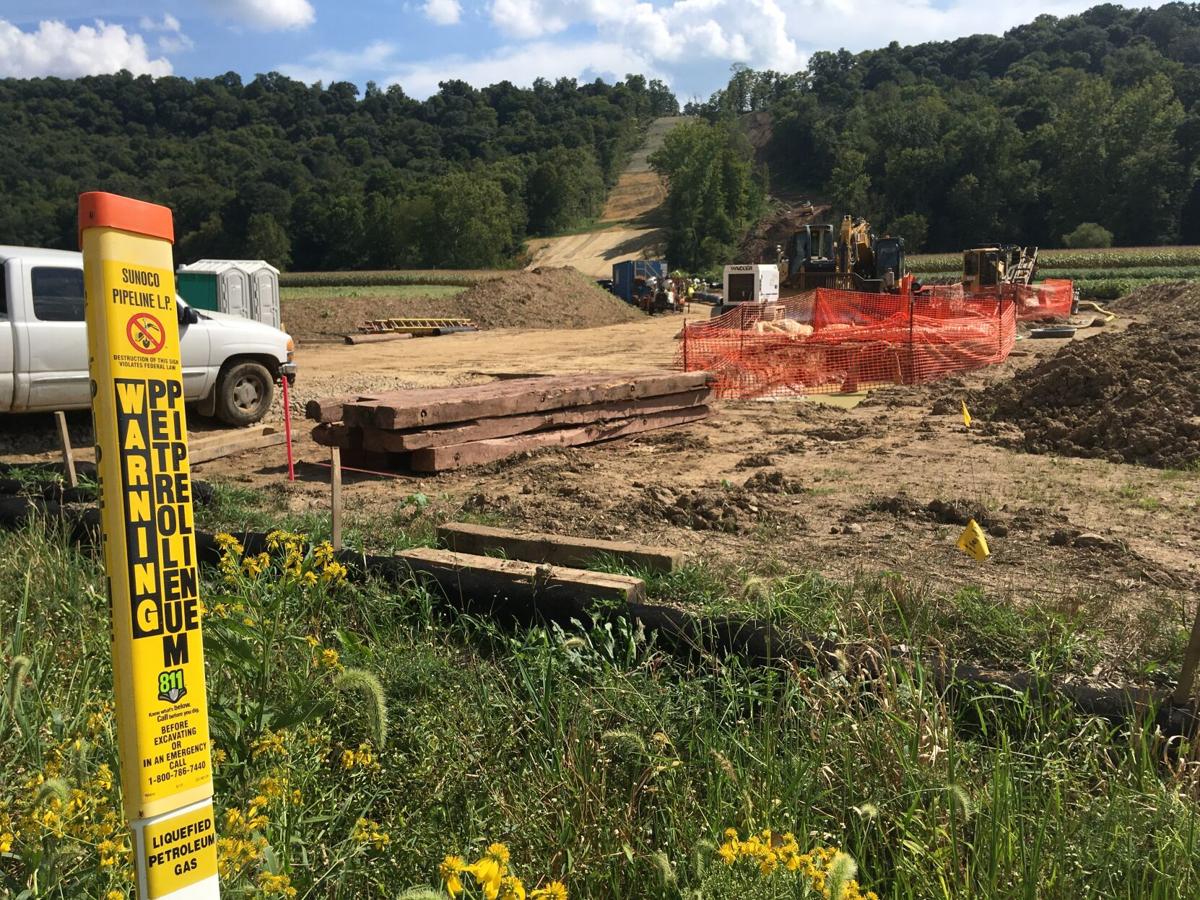 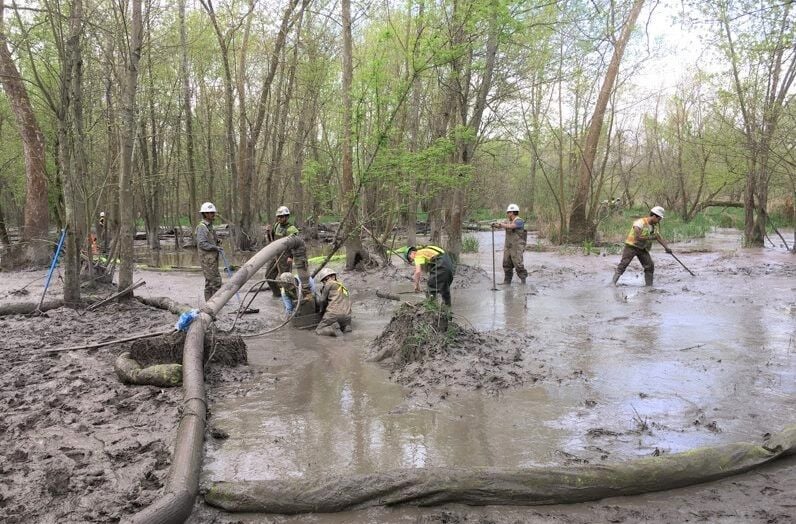 Drilling fluids spill into wetlands from Energy Transfer's Rover gas pipeline when under construction in Ohio in 2017.

Several fracking well pads and a wastewater impoundment are located in this forest of northcentral Pennsylvania.

Pennsylvania’s robust natural gas industry has been embarrassed by three environmental scandals in 15 months. Among the fallout: temporarily closed pipelines, the state’s largest environmental fine, the elimination of streams, and the illegal burial or alteration of parts of 163 wetlands.

In one case, Texas gas company Range Resources was found to have classified spent gas wells as temporarily inactive, rather than closed, thus avoiding a requirement to plug the wells to prevent leaks of methane, a powerful greenhouse gas.

The agreement, which included a $1.9 million civil penalty, acknowledges that Chesapeake Appalachia had, according to its own reports, filled approximately 26 acres of wetlands with dirt, rock or sand, without state or federal authorization, at 76 of its gas wells across five counties.

The company will have to restore about 11 acres of affected wetlands. To compensate for the remaining 15 acres, which are irreparably damaged, the company must create twice that many acres of new wetlands nearby, ideally in the same watershed.

Chesapeake Appalachia’s record of the damage goes back to 2013, when the EPA and Justice Department fined the company $3.2 million for violations in West Virginia. The company agreed then that it had impounded and filled in 2.2 miles of streams and smothered portions of wetlands at 27 well pad sites without required federal permits from the U.S. Army Corps of Engineers. The violations were discovered by routine EPA inspections, complaints from nearby residents and reports from the gas company itself.

After that case and a management shake-up at the company, Chesapeake Energy did an internal audit of 500 gas well sites in Pennsylvania and informed state officials that it had discovered similar violations at 76 sites.

Gordon Pennoyer, a Chesapeake Energy spokesman, said of the enforcement action, “Having voluntarily disclosed these issues with the DEP and EPA seven years ago, we are pleased to resolve this legacy matter.”

Under federal regulations, Chesapeake has a choice of restoring violated wetlands or creating new ones elsewhere at double the amount destroyed. The company has submitted a plan to restore wetlands at some of the drilling sites, restore wetlands elsewhere to compensate for places where steep slopes prevent work at the original location, and conduct a combination of on-site and off-site work in some cases.

DEP Secretary Patrick McDonnell applauded Chesapeake Appalachia for coming forward with its violations and called the settlement a “significant benefit to Pennsylvania’s public natural resources” because it will result in an increase of wetlands in the Chesapeake Bay watershed.

Diana Esher, acting administrator of the EPA’s Mid-Atlantic region, said wetlands are “critical ecological and economic resources for all Pennsylvanians.”

The Chesapeake Appalachia penalties followed another high-profile case that concluded in early 2020, when a gas pipeline company was fined an unprecedented $30.6 million by the DEP, partly for widespread wetlands and stream violations.

The case against ETC Northeast Pipeline stemmed largely from a landslide that ruptured the one-week-old Revolution Pipeline in rural western Pennsylvania on Sept. 10, 2018. The blast from ignited natural gas burned one house, caused six power transmission poles to collapse, and destroyed two garages, a barn and several vehicles, as well as forced evacuations.

The DEP found that the company, an arm of Texas-based gas pipeline builder Energy Transfer Corp., used poor construction and oversight practices in building the pipeline. But an investigation after the blast uncovered more widespread environmental harms along the 40-mile pipeline.

That laundry list of violations prompted the DEP to take the rare step of freezing pipeline permits for Energy Transfer Corp. subsidiaries, including that of the cross-state pipeline known as Mariner East 2.

That pipeline’s construction had already amassed a list of environmental violations, including sinkholes and 320 spills of drilling fluids. One spill into a central Pennsylvania lake cost Energy Transfer a $2 million fine.

“There has been a failure by Energy Transfer and its subsidiaries to respect our laws and our communities,” Gov. Tom Wolf said at the time of the Revolution Pipeline consent order. “This is not how we strive to do business in Pennsylvania, and it will not be tolerated.”

But after a one-year freeze, the DEP allowed Energy Transfer pipelines to resume or proceed with construction.

The DEP ordered Energy Transfer to restore all wetlands and stream sections where possible. Seventy of the 87 damaged or destroyed wetlands will be restored. The other 17 harmed wetlands will be atoned for with the restoration of four times as much wetlands in the same watershed.

In a much smaller case, the DEP and Range Resources agreed in February to a consent order after the DEP found that the company was trying to avoid plugging spent gas wells as required. The agency fined Range Resources $294,000 and required plugging all but one of the 42 wells in question.

“Abandoned wells can be an extreme hazard to the health and safety of people and the environment,” said Jamar Thrasher, DEP spokesman. “That contributes to air, water and soil contamination, so it’s an environmental hazard.”

Abandoned wells can leak methane, a potent greenhouse gas. These were conventional gas wells dating mostly from the 1980s or older, and not new fracking wells.

The company had filed paperwork with the DEP, mostly from 2012 to 2016, saying the wells were “inactive.” But an internal memo that Range sent to the DEP three weeks before paperwork was received on one well had reported that the well “was incapable of economic production.”

The DEP then investigated other wells and found 41 more that had been improperly classified.