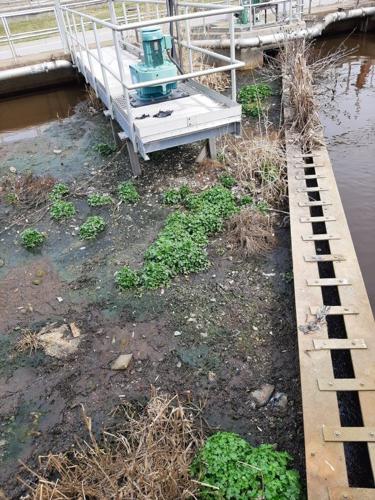 A photo by a Maryland state inspector shows a buildup of solids and the growth of vegetation in a biological reactor at Baltimore's Back River wastewater treatment plant. (Maryland Department of the Environment) 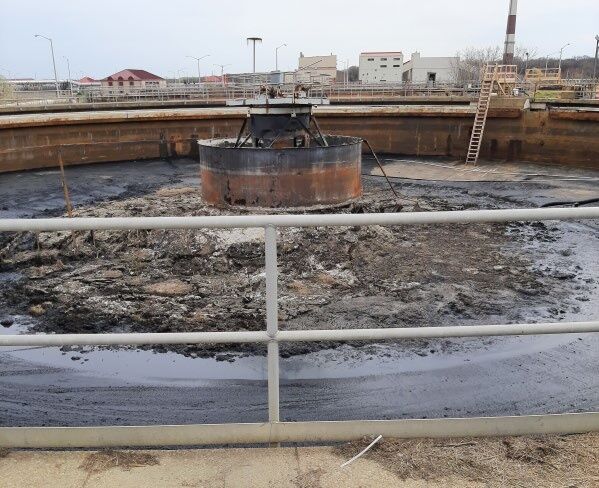 A photo by a Maryland state inspector shows a settling tank that he said had been rendered inactive from a buildup of solids. (Maryland Department of the Environment)

Grumbles’ order comes on the heels of a March 22 inspection by the Maryland Department of the Environment that found treatment equipment throughout the plant broken down or in poor condition, leading to multiple discharge violations of excessive solids and nutrient pollution. Only 2 of 11 primary settling tanks — half the number the plant staff said were absolutely needed to handle waste adequately — were functioning properly, the inspector reported, while other treatment tanks were clogged with scum and vegetation.

“The decline in the proper maintenance and operation of the plant risks catastrophic failures at the plant that may result in environmental harm as well as adverse public health and comfort effects,” the order said.

MDE already is in court seeking to force the city to remedy maintenance and operation problems at its Back River and Patapsco plants, Maryland’s two largest sewage treatment facilities. The state agency filed suit in January alleging numerous and ongoing discharge violations. The lawsuit, pending in Baltimore City Circuit Court, seeks civil penalties and an injunction requiring the city to take “all steps necessary” to come into compliance with its state-issued permits.

In the new order, Grumbles directed the city to cease unpermitted discharges at once and bring the plant in line with its state-issued permit. And it gave the city 48 hours to provide “sufficient documentary evidence” that the plant is operating in compliance with all terms of its permit and is no longer discharging inadequately treated wastewater Into Back River, a Chesapeake Bay tributary.

Asked what remedies MDE would seek if its order is not met on time, spokesman Jay Apperson said officials would answer that after the 48-hour deadline is past. He noted that the inspection had found “dozens of problems, including equipment failures, inadequate operations, and significantly deferred maintenance which underscore the lack of properly trained staff.”

City officials didn’t respond directly to questions about the MDE order. Jennifer Combs, spokeswoman for the city’s Department of Public Works, issued a statement saying, “The city is disappointed to learn of MDE’s order today, given the collaborative efforts to improve performance over the past several months. However, once the order is served, the city will respond accordingly.”

The state order is the latest twist in a controversy regarding the city’s treatment facilities that began a year ago when routine water quality monitoring by the nonprofit Blue Water Baltimore found elevated bacteria levels and floating fats, oil and grease near the outfall for the Patapsco wastewater treatment plant. The watchdog group reported its findings to MDE which, in a series of inspections through the summer and fall of 2021, observed extensive violations of both plants’ discharge permits as well as serious maintenance and staffing problems at both facilities.

The problems came to light publicly on Aug. 30 when Blue Water Baltimore released the MDE inspection reports for both plants along with an MDE letter to the city demanding immediate corrective action.

The city had submitted a plan to MDE last fall for coming into compliance, but the timeline indicated it could take years to fix all of the problems.

Blue Water Baltimore filed a lawsuit of its own in U.S. District Court in December alleging ongoing violations at the two sewage plants. That case is also pending.

Alice Volpitta, Blue Water’s Baltimore Harborkeeper, whose monitoring work first identified the city’s sewage treatment problems, said that the group and its attorneys had been working the past few months with the state and city “to develop a strong consent decree that will bring these facilities back into compliance and keep them there.

“Along the way, Baltimore City has told us again and again that work is being done, and the situation is getting better at both plants,” Volpitta added. “So to hear that the Back River [plant] is actually in worse condition now than it was several months ago is doubly concerning to us. This is unacceptable.”

Doug Myers, senior scientist with the Chesapeake Bay Foundation, said he was shocked by the conditions detailed in the latest MDE inspection.

“It looks like many parts of this plant receive no routine maintenance and most of the treatment systems are compromised as a result,” he said. He noted that the Chesapeake Bay cleanup effort is counting on significant pollution reductions from upgraded wastewater treatment plants like the city’s. “If those upgrades aren't working,” he added, “then the cleanup will be in jeopardy.”