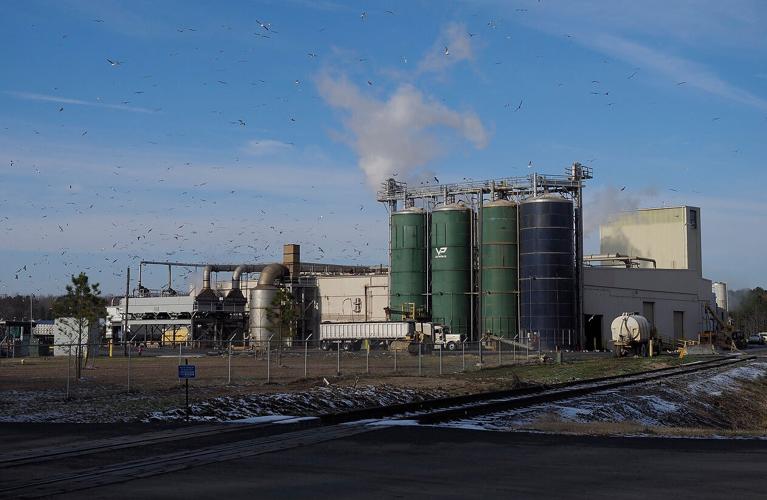 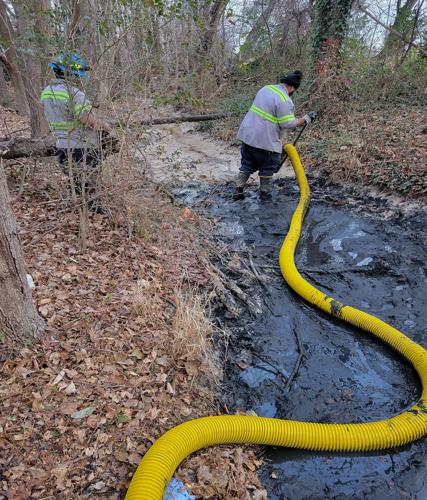 At Valley Proteins' poultry rendering plant on Maryland's Eastern Shore, workers clean up sludge that was discovered in a stream leading to the Transquaking River. (MD Department of the Environment) 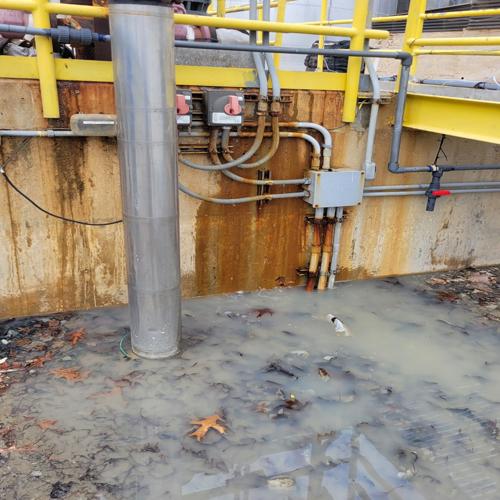 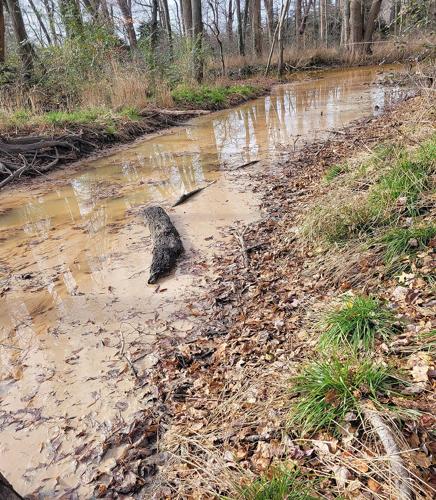 Sludge from the Valley Proteins chicken rendering plant in Linkwood, MD, fouls a stream leading to the Transquaking River. (MD Department of the Environment)

Maryland regulators have ordered a shutdown of a problem-plagued Eastern Shore chicken rendering plant after a tip from an environmental group led them to discover a batch of new pollution violations there.

The Maryland Department of the Environment on Dec. 21 directed Valley Proteins Inc. to cease operations at its facility in Linkwood in Dorchester County until it can meet its wastewater discharge permit limits and reduce the risk of overflows from its storage lagoons. The MDE threatened to fine or suspend the plant’s permit altogether if it failed to comply with prescribed corrective actions.

Michael A. Smith, vice chairman of the Winchester, VA-based company, said it had agreed to a temporary shutdown until it can lower the levels of its storage lagoons and meet permit requirements.

“We are working cooperatively with MDE to resolve the issue as quickly as possible,” Smith said.

The shutdown order comes after a series of MDE inspections this month found multiple problems at the facility. According to MDE inspection reports, those included an illegal discharge into a holding pond, discharges of sludge and inadequately treated wastewater into a stream leading to the Transquaking River, and leaks and overflows from treatment tanks.

The inspections were triggered by drone images provided by ShoreRivers, a coalition of Eastern Shore riverkeeper organizations, showing a grayish discharge from the rendering plant’s wastewater outfall, according to a letter MDE Secretary Ben Grumbles wrote to a Valley Proteins executive.

Choptank Riverkeeper Matt Pluta, a member of ShoreRivers staff, said that while doing aerial surveillance on Dec. 10, he saw “a large, discolored discharge” coming from the Linkwood facility and flowing downstream toward the Transquaking.

The MDE inspected the plant later the same day and reported it found acidic, inadequately treated wastewater being released into a stream, chlorine-treated wastewater leaking onto the ground, and foam and wastewater overflowing from another treatment tank.

The following week, more MDE inspections found waste sludge in a stream outfall leading to the Transquaking, continuing improper discharges both to the stream and onto the ground and inadequate cleanup of earlier detected leaks, spills and overflows. The MDE also found raw chicken waste on the ground. Regulators ordered the plant to cease discharges until the wastewater could be treated sufficiently to meet its permit limits.

“Chemical spills, tanks are overflowing, illegal discharges coming from all over the treatment process. It’s an absolute mess,” Pluta said of the conditions described in the inspection reports.

Neighbors and environmental groups have complained for years about the Valley Proteins plant, which takes up to 4 million pounds of chicken entrails and feathers daily from poultry processing plants and renders them into pet food.

The Transquaking, which flows into Fishing Bay, a Chesapeake Bay tributary, has been classified for more than two decades as impaired by nutrient pollution. The rendering plant is the river’s largest single source of such pollution, which fuels algae blooms and reduces oxygen levels in the water below what’s healthy for fish and other aquatic animals.

In his Dec. 16 letter to the company, the MDE’s Grumbles called the Linkwood plant’s operations “unacceptable.” He said the company’s recent compliance record “indicates a pattern of improper operations and poor decision-making regarding water pollution and air emissions issues.”

Another follow-up inspection on Dec. 20 found evidence of more sludge having been discharged in recent days, despite cleanups of earlier releases and leaks. The inspector also found that the plant had stopped discharging and its wastewater lagoons were filling up, despite some of the wastewater being trucked away. That prompted the shutdown order.

“We have a plan in place to move as much of our incoming supply to other [renderers] and or landfills in the short term,” he said by email. The company also has arranged, he said, to lower the levels in its storage lagoons by trucking “treated clarified water” from them to an unnamed local wastewater plant.

“We have seen our system improve over the last few days and anticipate being able to operate shortly,” he concluded.

MDE spokesman Jay Apperson said Valley Proteins is putting together a plan for returning to operation, but he said the company’s plan would have to persuade the MDE that it will comply with its discharge limits and other permit requirements.

In April, Pluta’s ShoreRivers group joined with the Chesapeake Bay Foundation and Dorchester Citizens for Planned Growth to threaten a lawsuit against the company, accusing it of repeatedly exceeding discharge limits on pollutants such as fecal coliform bacteria, nitrogen, phosphorus and ammonia.

The plant has been operating on an outdated discharge permit since 2006, and neighbors and environmental groups have been calling on the MDE to impose tighter requirements. Meanwhile, in 2014, the company applied for state approval to nearly quadruple its wastewater output, from 150,000 gallons to 575,000 gallons daily.

In September, the MDE released a new draft permit that would tighten limits on what the company could discharge. State regulators set caps on discharges of nitrogen and phosphorus that would require the company to upgrade its wastewater treatment facility, even if it did not expand operations.

State regulators also vowed to seek “a significant financial penalty” as well as corrective actions for a series of water and air pollution violations it had documented at the Shore facility.

That represented a shift in the MDE’s approach to the rendering plant. Earlier this year, the department had planned to provide Valley Proteins nearly $13 million to upgrade the wastewater treatment system at its Linkwood facility. Some lawmakers objected to giving public funds to a private company with a history of discharge violations, and the legislature limited such grants to half of any projected cost. After finding more violations at the plant, the MDE subsequently withdrew the grant offer.

Critics of the plant welcomed the MDE’s pledge to take enforcement action. But at hearings in October and November, they demanded that the state put more teeth in the plant’s discharge permit. They called for independent monitoring of its discharges, curbs on any planned increase in the rendering plant’s operations until it corrects all deficiencies and the MDE pledges to fine and take enforcement action for any future violations.

Pluta said the latest developments add to his concerns about the rendering facility and about the state’s ability to oversee it.

“We recognize that there’s a need for this type of operation,” he said, “but if you can’t operate within the guidelines of the law, of your permit, then you shouldn’t be able to operate at all.”

Pluta also questioned whether the MDE has enough staff and resources to ensure compliance, noting that the MDE only discovered problems there after he reported seeing a suspicious discharge.

“They’ve been inspecting monthly and didn’t come up with all this stuff,” he said.

The public comment period on Valley Proteins’ draft permit, which was extended for 60 days, remains open until Jan. 14, 2022.

But Apperson also released a statement from the MDE secretary, saying, “We are much more focused on enforcement and correcting any ongoing violations before taking any actions on a draft permit.”