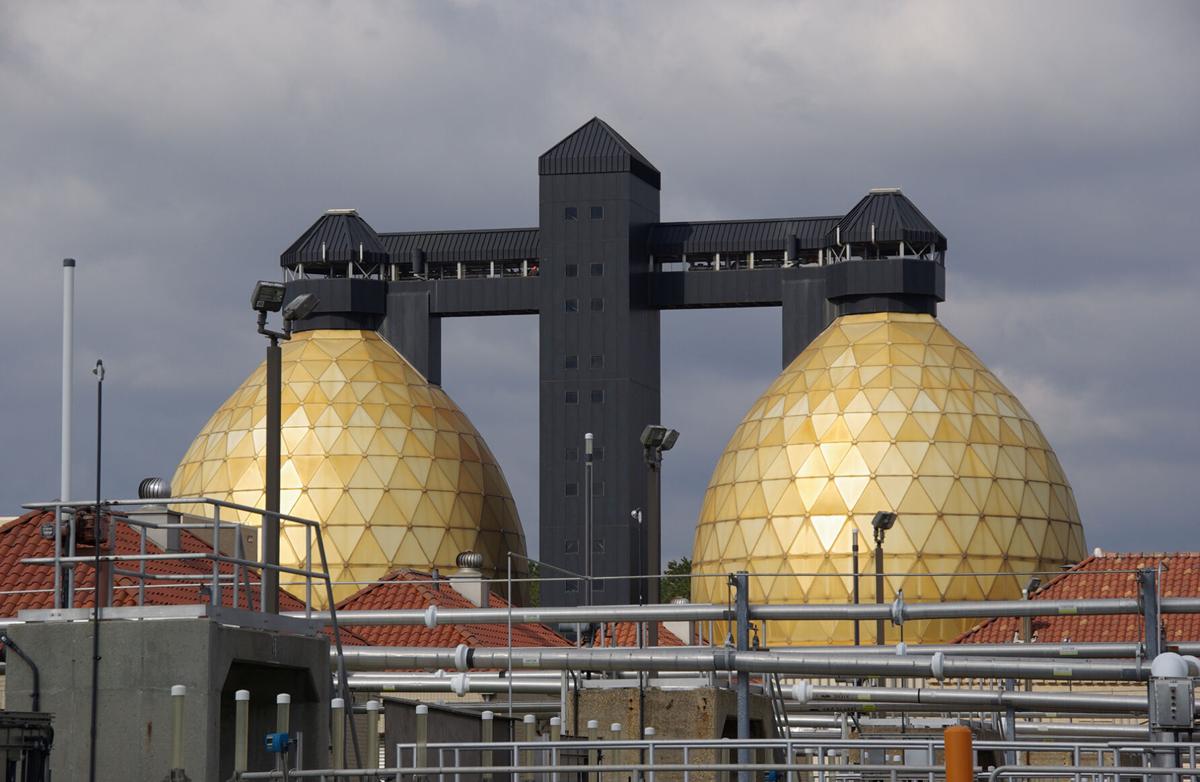 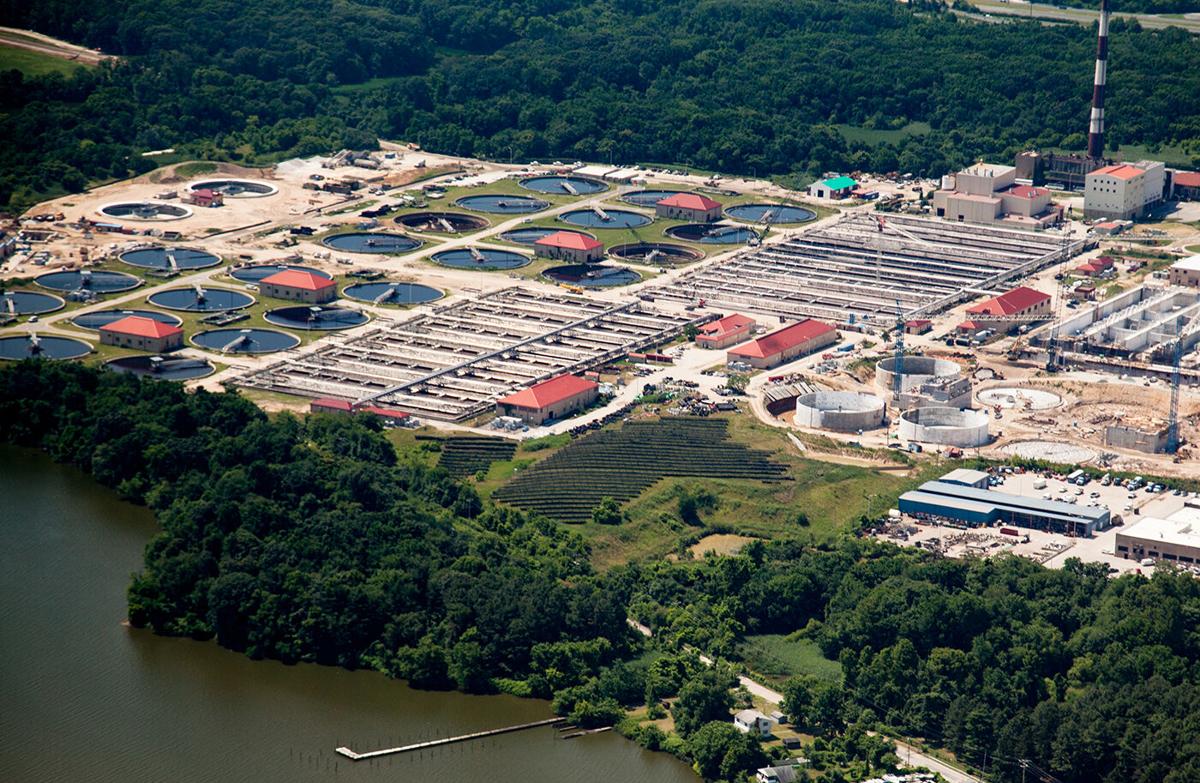 The Back River Wastewater Treatment Plant processes sewage from about 1.3 million residents in a 140-square mile area of Baltimore city and Baltimore County. (Will Parson/Chesapeake Bay Program) 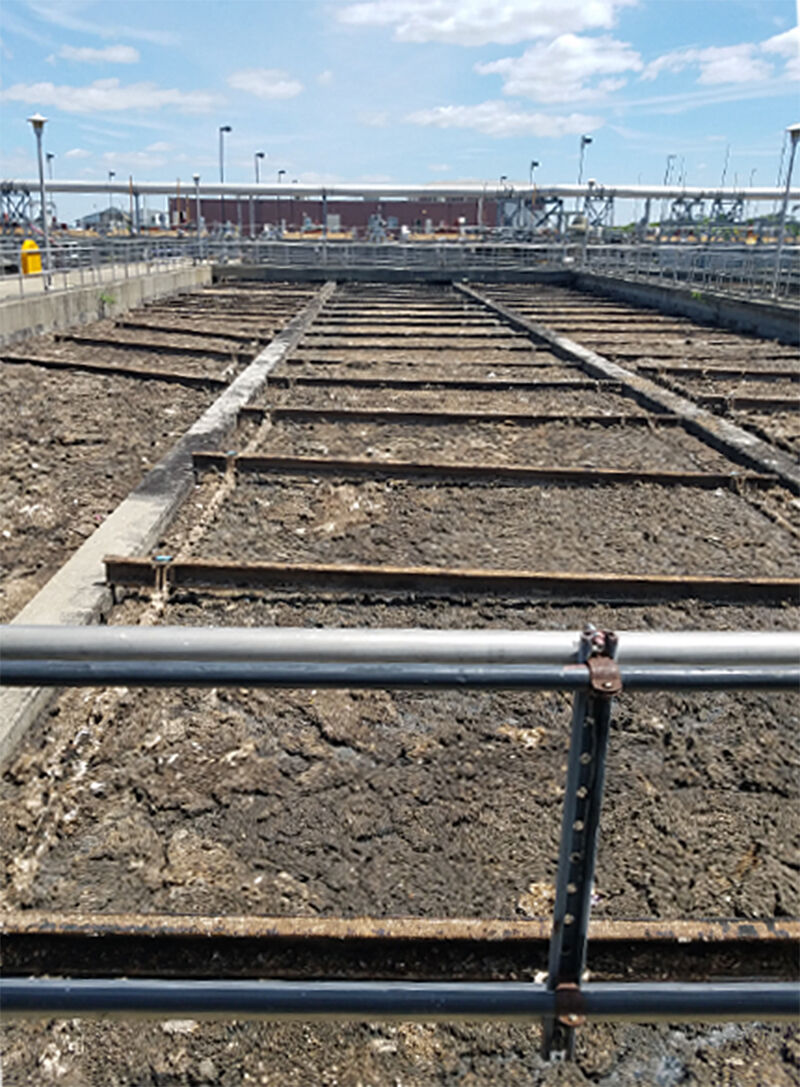 This photo from the state inspection report for the Patapsco Wastewater Treatment Plant in Baltimore shows settling tanks rendered inoperable by an accumulation of solids and fats, oils and grease. (Maryland Dept. of the Environment) 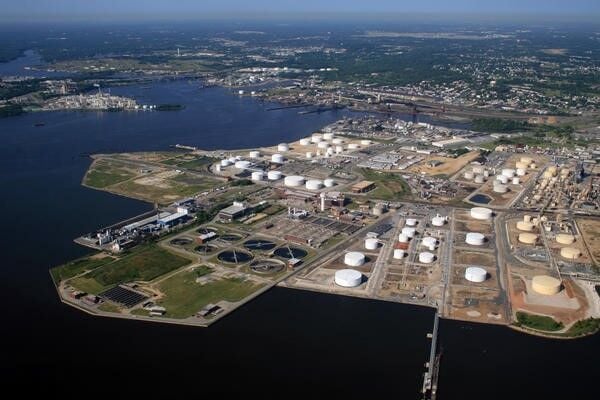 Baltimore has long been plagued by sewage leaks and overflows fouling its waters. Now, the city has a new pollution woe: poorly maintained municipal sewage treatment plants that for more than a year have been daily dumping millions of gallons of bacteria– and nutrient-laden wastewater into rivers that flow into the Chesapeake Bay.

Following a watchdog group’s discovery of high bacteria levels in wastewater coming from one of the city’s two sewage treatment plants, an inspector for the Maryland Department of the Environment has found “numerous deficiencies and violations” at both facilities.

In visits to the city’s Patapsco Wastewater Treatment Plant in May and to the Back River plant in June, the MDE inspector found operational and maintenance problems, with key treatment equipment malfunctioning or out of order, staffing shortages and botched sampling for toxic contaminants in the wastewater.

City public works officials agreed to meet with state regulators following an Aug. 23 letter from the MDE demanding immediate corrective actions and warning the city that it faces fines of up to $10,000 per day and possible legal action by the state attorney general.

“We’re going to hold [the Department of Public Works] accountable,” MDE Secretary Ben Grumbles said in an interview. “They have a lot of explaining to do.”

In response to press queries, a spokesman released a short statement from Public Works Director Jason Mitchell. He said that his staff “has developed a strategy to get back into compliance and will be providing a timeline for compliance to MDE.”

Alice Volpitta, the Harbor Waterkeeper, said she and her colleagues at the nonprofit watershed group Blue Water Baltimore were “pretty shocked” by the scope and severity of problems uncovered at the city’s wastewater plants after the group reported detecting high fecal bacteria levels in the Patapsco plant’s discharge in April and early May.

In prior years, Volpitta said, Blue Water Baltimore’s monitoring program had picked up occasional bacteria spikes at the Patapsco plant, usually when it was overwhelmed by inflows from heavy rains. But this past spring, she and her team detected “consistent ongoing high bacteria readings” unrelated to rainfall at the plant’s outfall just upriver of the Key Bridge.

The city has spent $1.6 billion since 2002 to comply with a state-federal consent decree requiring an overhaul of its sewer network to halt frequent overflows and leaks of untreated sewage. At the end of 2020, city officials announced the near completion of a $430 million “headworks” project at the Back River plant, which officials predict will eliminate 83% of the overflows. The city is also spending millions annually to curb polluted stormwater runoff from streets, parking lots and buildings.

According to Blue Water Baltimore, the combined daily discharge of the two plants would fill a 2.5-foot deep wading pool the size of the city’s 155-acre Patterson Park. By sheer volume alone, not the amounts of pollutants, the plants’ daily combined discharge is on par with the cumulative amount of rain-diluted sewage that overflows each year across the city.

“If we can’t trust our wastewater treatment plants to actually treat the sewage,” Volpitta said, “it doesn’t really matter much what other … best practices we’re putting on land.”

The MDE inspection reports detail numerous violations at each plant, many of them similar.

At the Patapsco plant, the MDE inspector found it had repeatedly violated limits since July 2020 on levels of harmful bacteria, phosphorus, nitrogen and total suspended solids. Overall, the plant exceeded its total authorized nitrogen discharge for 2020 by nearly 140,000 pounds and surpassed its total phosphorus load by 47,800 pounds. Fewer than half the units used to screen incoming sewage were operational, and those were so clogged with trash and debris they couldn’t work properly, the inspector found.

Plant managers blamed the exceedances on equipment failures and on a worker shortage because of the coronavirus pandemic, the MDE report said.

But the MDE inspection found that the Patapsco plant also has failed to comply with a 2016 consent order requiring it to reduce discharges of fats, oils and grease into the river. The city had yet to upgrade or replace equipment needed to remove the pollutants, despite a 2018 deadline, and only 5 of 18 settling tanks to be used for the removal were working at the time of the visit. Some were so full of scum the inspector warned they would also fail soon without prompt maintenance.

At the Back River plant, the MDE inspector said the discharge exceeded permit limits on pollution every month but one from August 2020 through May 2021, with excessive levels of nitrogen, phosphorus, total suspended solids and ammonia, and a couple of instances of elevated bacteria. Plant managers said there had been a malfunction of a key piece of equipment, a centrifuge used to separate solids from liquids. But the inspector noted that the exceedances began months before that breakdown and that managers had failed to report excessive discharges promptly to the MDE, as required.

During his June walk-through, the MDE inspector also found “malfunctioning equipment because of maintenance problems” and that only two of 76 plant operators had permanent licenses, an indication of their level of training and expertise to run and maintain the facility properly. Plant managers told the inspector that some staff had failed to pass the licensing test and others had declined to take it because there was no incentive to do so.

The inspection further found defective sampling at Back River for toxic contaminants, particularly for polychlorinated biphenyls or PCBs, which rendered the results useless in gauging how much is being removed or discharged into the river. Fish consumption advisories throughout the Baltimore area advise recreational anglers to limit their meals of locally caught fish because of the buildup of PCBs in them.

MDE Secretary Grumbles said it is a “high priority” for state regulators to quickly rectify the situation.

“We know how important of a partner the city is in reducing pollution and helping the state meet its [Baywide nutrient reduction] requirements,” Grumbles said. “When there are problems at a treatment plant [involving] operation and management of the facility, that’s a heightened concern for us.”

Volpitta praised the MDE for taking action but said she was perturbed that the agency didn’t catch the problems sooner. She noted that in the year before Blue Water Baltimore’s sampling, the city had been filing required monthly discharge monitoring reports with the MDE and EPA, which made it clear that some pollutants were exceeding permitted levels.

“That’s the big question,” she said. “Why did it take so long for anything to come of that self-reporting?”

Grumbles said that MDE staff started looking at the plants’ monthly reports and getting information from the city in March. At that time, he said, they saw a “trend that was totally unacceptable” and began preparing for inspections.

The first inspection took place the day after Blue Water Baltimore gave the MDE its water quality findings. At the time, Volpitta said, MDE officials didn’t give any indication they were already aware of problems at the Patapsco plant.

“I think there’s a lot of questions to be answered here,” she said. “We’re very concerned about the lack of oversight that appears to have occurred.”

For the safety of its staff during the coronavirus pandemic in early 2020, the MDE cut back on physical inspections of facilities discharging into state waters. But even before that, it had begun conducting a growing number of compliance checkups without leaving the office, by reviewing plants’ self-reported data.

Before this year, the MDE had physically inspected the Patapsco plant twice in 2016 and once each in 2017, 2018 and in June 2020, according to a spokeswoman. The Back River plant was inspected once in 2016, five times in 2017, twice in 2018 and once in 2019, she said. Three of the 2017 inspections were in response to complaints, the spokeswoman noted, without providing additional information.

Mitchell, the city’s public works director, said in his statement without elaborating that “the root causes for the violations have been identified by DPW and will be addressed systematically to ensure we achieve 100% compliance.”

Grumbles said, “it’s a priority for us to get this resolved as quickly as possible.”

But Volpitta said that, given the findings of the MDE inspections, she doubts there’s a quick fix to all the problems.

Josh Kurtz, Maryland director of the Chesapeake Bay Foundation, called for swift enforcement action against the city, but also questioned the state’s oversight of such facilities.

“Marylanders depend on government agencies to be transparent and accountable when problems arise,” Kurtz said in a statement Tuesday. “In this case, it appears Baltimore’s Department of Public Works failed for years to address known problems at the city’s two wastewater plants, which led to months of partially treated wastewater flowing into the Baltimore Harbor and Chesapeake Bay during the previous year.”

And even if the MDE was investigating the plants before Blue Water Baltimore reported its findings, Kurtz found fault with the low-key way it was handled until this week.

“Neither DPW nor Maryland Department of the Environment, the agency tasked with enforcing state pollution regulations, publicly addressed these ongoing issues at the plants until the nonprofit Blue Water Baltimore issued their findings in a news release [on Monday],” he said.

The MDE has relied heavily on upgrading wastewater treatment plants to meet its nutrient reduction obligations under the Bay’s “pollution diet,” formally known as the total maximum daily load, which the EPA imposed in 2010.

“With such a heavy reliance on these upgrades,” Kurtz said, “the state must prioritize oversight of these facilities to ensure proper operation and impose penalties for violations.” Failures at large plants like Patapsco and Back River can undermine the overall Bay restoration effort, he added.

Kurtz also said the city and state owe more diligence to the health of Baltimore area residents. “Both plants serve and discharge into rivers and streams where underserved and frontline community members live,” he said. “These communities have suffered from a legacy of disproportionate impacts of dangerously high levels of pollution, especially harmful bacteria.”