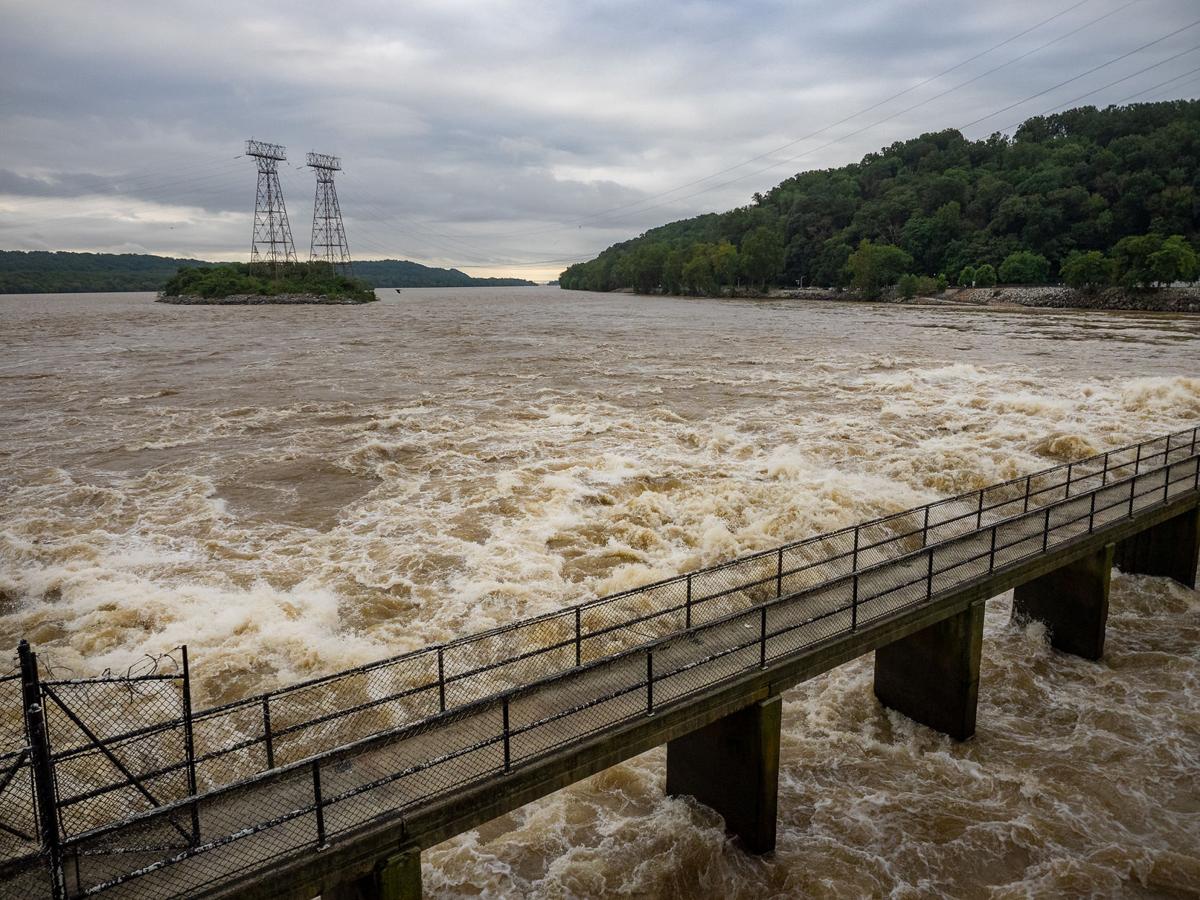 Stormwater in the Susquehanna River surges through Conowingo Dam in September 2018. 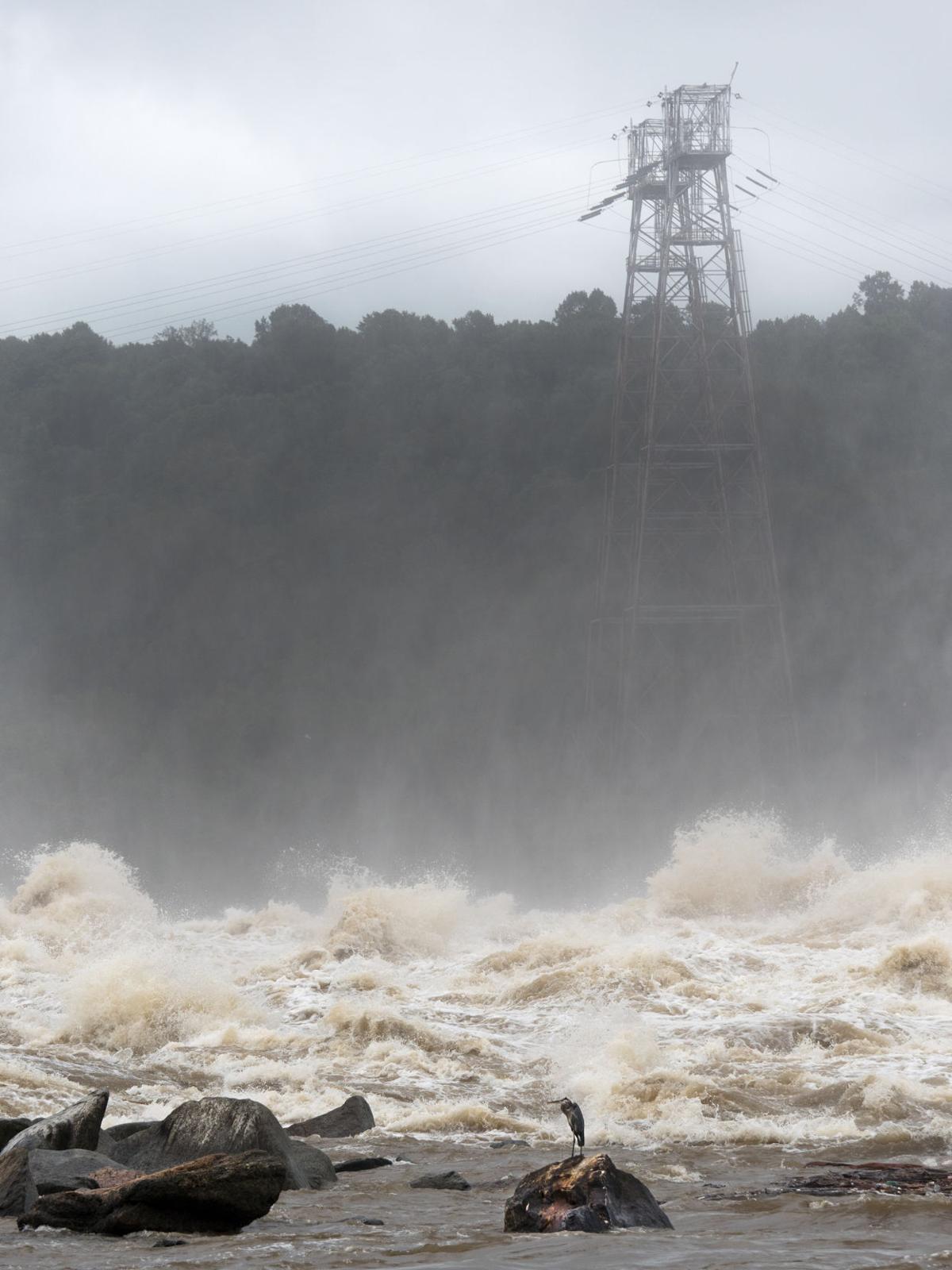 A heron perches on a rock in the Susquehanna River, away from the turbulent flow crashing through Conowingo Dam in 2018.

From Virginia to New York, residents of the Chesapeake Bay watershed were hit with a deluge of water in mid-July 2018. And it wasn’t just another summer storm.

The rain kept coming, off and on, for months, stretching though much of spring 2019.

Rain — and the high river flows it creates — is typically bad news for the Bay, because it flushes water-fouling nutrients and sediment off the land and into the estuary.

In recent months, scientists have been getting a glimpse at the impact those persistent rains had on the Chesapeake.

The University of Maryland Center for Environmental Science released its annual Bay report card, rating its health at 44 on a 100-point scale for 2019. That’s the lowest score since 2011, when Tropical Storm Lee and Hurricane Irene tore through the region, unleashing a flood of sediment and nutrient pollution.

Data from the report card and other analyses show that the Bay took a tremendous hit last year, with impacts rippling from its bottom to its surface. Oxygen-starved water suffocated some bottom dwellers, while murky conditions at the surface delivered some of the poorest water clarity in the last three decades.

Still, scientists say, had it not been for the billions of dollars spent to reduce nitrogen and phosphorus runoff — nutrients that trigger massive algae blooms in the Bay — conditions would have been much worse.

“As much as we’ve been hit with these environmental insults, we are maintaining some resilience in the Bay,” said Bill Dennison, vice president for science application with UMCES.

But the high flows also show that the Bay remains vulnerable to the whims of nature — and those whims, including hotter temperatures and more runoff, are expected to become even more pronounced as the region’s climate continues to change.

“Climate change is real, and it is now,” Dennison said. “This isn’t something that we can put off into the future. We are starting to see these effects.”

Rainfall gradually makes its way into the more than 100,000 miles of streams that drain the Chesapeake’s 64,000-square-mile watershed. Along the way, the water gathers nutrients, sediment and other pollution from fields, lawns and parking lots, and they, too, ultimately make their way into the Bay.

Typically, the more it rains, the greater the amount of nutrients and sediment carried into the Bay. When the nutrients reach Bay waters, they spur huge algae blooms. The sediment contributes to murky water conditions, and can smother bottom-dwelling organisms.

According to the U.S. Geological Survey, the 2018–2019 “water year” had the highest average river flows in 82 years of monitoring, averaging 131,000 cubic feet per second.

(A water year starts in October, when river flows begin to pick up after dry summer months, and runs through September.) Put another way,  that means about 974,000 gallons of fresh water surged into the Bay each second, 65% more than the long-term average.

USGS monitoring takes place where the Bay’s nine largest rivers meet tidal waters. In most places, this is near where Interstate 95 crosses the rivers, along a geographic feature called the Fall Line.

Altogether, about 60% of the nutrients from the watershed flow past those monitoring stations before reaching the Bay — the rest flow directly into the Chesapeake or the tidal stretches of its rivers, where monitoring is difficult.

After adding in the remaining 40% that flows directly into the Bay or the tidal portion of its tributaries, the total amount of nutrients entering the Bay last year was significantly above the 217 million pound nitrogen goal and 14 million pound phosphorus goal set for the Bay watershed for a “normal” flow year in order to achieve healthy water quality conditions.

That illustrates that although the average nutrient trends have decreased over time, precipitation has a huge impact on nutrients, water quality and — importantly — the multitude of species that call the Bay home. That includes everything from striped bass and crabs to worms and underwater grasses.

“The living resources in the Bay do not experience [average conditions],” said Doug Moyer, a USGS hydrologist. “They experience the actual, what came in.”

When nutrients spur the growth of more algae than can be consumed by oysters, fish and other Bay dwellers, the excess ultimately dies and sinks to the bottom. The decomposition process draws oxygen out of the water that aquatic species need to survive.

Warm temperatures further accelerate algae growth, contributing to an oxygen-starved “dead zone” in deep waters each summer, but the zone persists longer and covers a larger area in high flow years, when nutrients surge into the Bay.

That makes the dead zone worse because oxygen used by decaying algae in deep areas is not easily replenished with oxygen from the surface.

Those dynamics were evident last year, according to Virginia Institute of Marine Science researchers, who use a computer model to estimate the extent of the dead zone.  Areas of low oxygen, or hypoxic, water started to form earlier than normal last year, possibly fueled by nutrients left over from the previous fall, and extended well into October. The hypoxic area covered portions of the Bay for 136 days in 2019, just shy of the 143-day record. By the time it peaked at 13.1 cubic kilometers or about 17% of the Bay, most aquatic life couldn’t survive there.

“Last year was kind of depressing, but it clearly would have been much worse without all those years of nutrient reductions,” said Marjy Friedrichs, a VIMS scientist who was the co-developer of the hypoxia model.

Work by Luke Frankel, a graduate student working with Friedrichs, estimated that the amount of hypoxia would have been 30% greater had there been no nutrient reductions since 1985, when Bay cleanup efforts began.

But for many fish, the area off-limits was larger than just the dead zone. Scientists typically define hypoxic conditions as those with less than 2 milligrams of oxygen per liter of water, and many fish or shellfish need more than that. For example, blue crabs require 3 mg/l, and striped bass require 6 mg/l. Even when it’s not lethal, suboptimal oxygen conditions can harm fish reproduction and make them more susceptible to disease.

Species that can move seek out areas with adequate oxygen, but some don’t have that option. Last year was particularly brutal for clams, worms and other bottom-dwelling species that can’t relocate. Many died.

Benthos, a catch-all term for bottom-dwelling organisms, are an important part of the Bay’s food web, providing food for striped bass, blue crabs, spot, croaker and other species. Just 38% of the Bay met its restoration goal for healthy benthic habitats last year, down from 58% the previous year, and the lowest score on record, according to data from the scientific consulting firm Versar.

Robert Llanzo, a Versar scientist who compiles the benthic data, said it appeared the severe hypoxia, which extended unusually late into the summer, was most likely to blame for the decline. “When summer hypoxia is high, we typically see a higher level of benthic community degradation in the Bay,” he said.

High flows, and the poor water quality that results from them, are often bad news for underwater grasses as well.

Those underwater meadows, which are critical habitats for juvenile blue crabs, fish and other species, require sunlight to survive. But algae blooms and sediment-clouded water keep sunlight from reaching them.

That proved to be the case in 2019. The Bay lost a bit more than 34,986 acres of submerged aquatic vegetation, erasing nearly a third of the plants from the shallow waters around the Bay. That was the largest single-year loss since VIMS began aerial surveys of the beds in 1984.

Still, some scientists last year feared the losses could have been greater, possibly erasing half of the Chesapeake's grass beds.

Instead, many areas of the Bay escaped with little impact. A disproportionate amount of the loss took place around Tangier Sound and nearby areas, which have large beds of widgeon grass — a species notorious for rapid declines when conditions get bad.

But grasses in many low salinity areas of the Bay and its tidal tributaries expanded in 2019, and Susquehanna Flats — the largest grass bed in the Bay — held its own despite the continued heavy flows.

“It is easy to treat the Chesapeake Bay as this monolithic estuary, and it’s not,” said Christopher Patrick, assistant professor of biology at VIMS. “It’s a very different system from place to place.”

Overall, the 66,387 acres of grasses observed in the Bay last year is still greater than the low of 38,228 acres when the survey began.

“We’ve fallen to a level that is comparable to where we were at five years ago or so. So it is not like we’ve gone backward a huge amount,” Patrick said. “We have wiped some recent gains off the map. That doesn’t mean that they won’t come back.”

Of particular concern: Back-to-back warm summers in 2018 and 2019 appear to have taken a toll on eelgrass, the dominant grass species in high-salinity areas of the Bay. Eelgrass is sensitive to heat and is near the southern end of its range in the Chesapeake.

Grass coverage in high-salinity areas has been trending downward since the mid-1990s and is near its lowest level since the survey began. Scientists fear eelgrass may further decline as the Bay continues to warm, hampering efforts to reach restoration goals.

“Really, we are dealing with climate impacts at this point,” said Brooke Landry, a biologist with the Maryland Department of Natural Resources.

While it’s difficult to say whether the rain experienced in 2018–19 was the direct result of climate change or natural weather variations, the region has been getting warmer and wetter.

“We were seeing some positive trends, we are reducing nutrient pollution,” said Matt Strickler, Virginia Secretary of Natural Resources. “But the warmer temperatures and the wetter weather that are holding back progress are exactly what models have predicted that manmade climate change would bring to our region.”

Water temperatures in the Bay have increased about 1.5 degrees since the early 1990s. Rainfall has increased in the watershed, on average, by about 10% over the last century. And an increasing proportion of the rain comes during severe storms. Climate scientists expect those trends to continue in coming decades.

Rain and warm temperatures seen the last two years, scientists say, illustrate how a changing climate may offset some of the cleanup efforts in years to come.

“You can reduce all the nutrients and sediment in the world, but if it just keeps raining, that rain is going to find stuff to wash into the rivers and into the Bay,” Landry said.