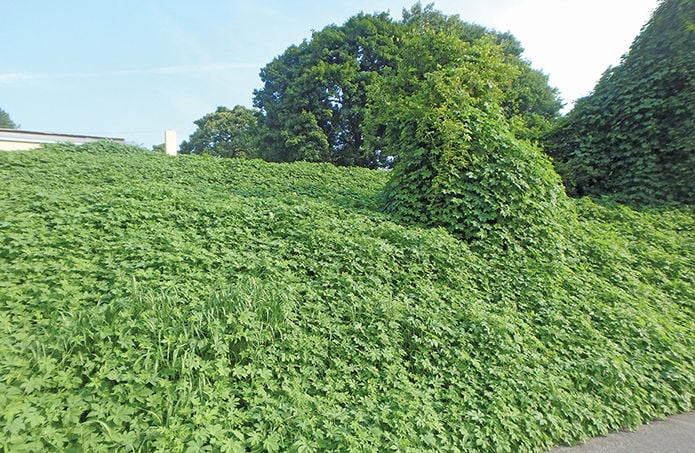 Nonnative plants like Japanese hops take advantage of forest-edge habitat like roads and other infrastructure needed by Marcellus Shale gas development. Invasive plants, traveling with the construction vehicles and materials, are making inroads into deep interior forests in Pennsylvania once protected by remote locations. (PA Department of Conservation and Natural Resources, Bureau of Forestry) 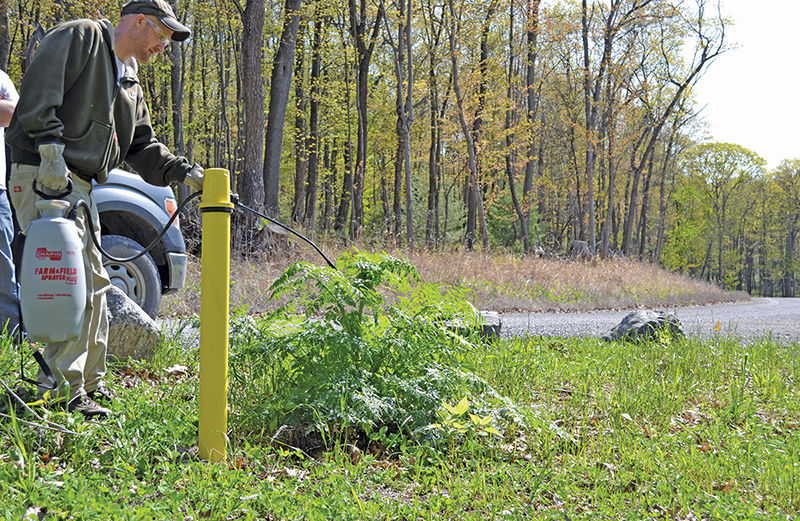 Land managers are trying to get ahead of poison hemlock, left, before it spreads in Pennsylvania’s state forests. (PA DCNR Bureau of Forestry) 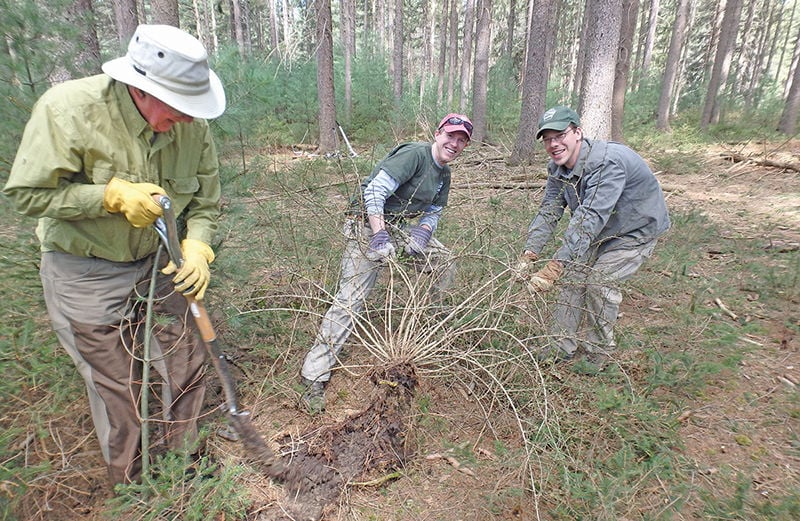 Japanese barberry has to be removed mechanically. (PA DCNR Bureau of Forestry)

When Marcellus Shale drilling came to Pennsylvania state forests, it brought a few hitchhikers along — invasive plants. They got a free ride into remote northcentral interior forests that previously had been spared the influence of heavy truck traffic.

Yes, truck traffic. One does not generally associate deep forest interiors with lumbering construction vehicles, but with about 700,000 acres of state-owned forest land open to gas and oil exploration (about half of the total that is underlaid by shale deposits), a lot of ad hoc roads have been cut through those woods.

It’s the only way drilling companies can get to well sites and lay concrete gas-drilling pads, which often sprawl over several acres. In the process, the trucks bring in the seeds of nonnative plants — in their tire treads, on their undercarriages or in loads of gravel and other materials.

The cleared land around the pad is exactly what nonnative plants need to get a firm foothold — soft, recently disturbed soil with lots of sunlight and drastically fewer native plants to compete with.

Invasions of nonnative plants can be as destructive to a northeastern forest as a wildfire is to those in the West. Invasives love edge habitat, including the sides of roads through forests and mown grass in recreational areas. With no natural disease or predators to slow them down, the foreigners can quickly colonize land where dispersed, crowding out native species.

Studies have shown that invasives can even halt forest regeneration. For example, if only a handful of oak or maple seedlings manage to break through thick mats of Japanese stilt grass or mile-a-minute weed, the deer that feed on such saplings may eat the scant new growth and wipe out a new generation of trees.

But no one really knew how gas development would impact the core forest when it began in 2008. The Pennsylvania Bureau of Forestry, a division of the Department of Conservation and Natural Resources, assembled a 15-member team of experts in 2010 to monitor — and mitigate — impacts on the forest’s ecology.

“We knew it would be a problem, but this was the first opportunity to track how gas development across a large portion of interior forest land would impact plant communities,” said Kelly Sitch, the plant specialist on the bureau’s Marcellus Monitoring Team. “We needed these studies to inform us how they spread. As land managers, we wanted to know the how, the what and the where.”

What is clear from Penn State’s research is that invasive plants are making “significant inroads” in state forests. In less than a decade’s time, 60 percent of the drill pads had at least one invasive plant species and 19 percent had three or more species present. Well pads with extensive road access tended to have more robust invasions.

Scientists not only surveyed which plants were present on 127 well pads but also did some census work — “stem counts,” they’re called — to measure the abundance of each species and indicate how fast or slow a particular species might be multiplying. The longer a well pad has been in place and the more wells drilled per pad, the studies showed, the more abundant and diverse the invasive species.

“Given the fact that, on average, 1,235 one-way truck trips…are required to complete an unconventional well, the potential to transport invasive plant seed is significant,” said Kathryn Barlow, lead researcher on the team. For the most part, those trucks are delivering fracturing fluid and “proppant,” which is essentially sand, natural or man-made, that is injected to keep a hydraulic fracture open.

The research team found that invasive plants were virtually nonexistent in the forested sites away from well pads, indicating that the pads are likely the open door for invading species. They have created an estimated 4,300 acres of forest-edge habitat: prime territory for nonnative species.

The Penn State research is one of many studies conducted in partnership with bureau, Sitch said. The data were collected as well pads were being developed and, he said, are crucial to efforts aimed at preventing large, destructive infestations in core interior forest.

“DCNR spends a significant amount of time and manpower on restoring disturbed forest areas, whether it’s [logging], recreational activity or gas development activity,” he said. “[Our] job is to find how we are increasing the pressure or how we can prevent new and more species from coming into forests.”

Not every invasive plant is created equal, and land managers tasked with the sustainability of the state forest system for the future, need a triage system, similar to that of a hospital emergency room. The plant species with the potential to cause the most damage in the least amount of time is often the top priority. But Sitch said that the response sometimes focuses on newly discovered species that can be eradicated with little effort before they take hold. Priorities change from one region to the next, as do the species threatening each ecosystem.

One approach might be to focus greater effort on multiple-well pads, sites that research indicates are the most accommodating to invasive plants. Research also points to the potential benefit of controlling the nonnatives that crop up along the access roads, reducing the invasion pressure on the well pads.

As part of the DCNR strategy of carefully researched forest management plans and extensive monitoring in and around gas sites, some gas operators are also being trained to monitor for rare plants and to eradicate invasives around the well pads. Some of the newer gas leases, Sitch said, make it a written requirement.

“Our native ecosystems haven’t evolved with these species and we often don’t know which one of them will take over natives,” he said. “We continue to try to prevent the loss of biodiversity of native plants but it is impossible to fight on a large scale. You have to take it down to the forest-stand level.”