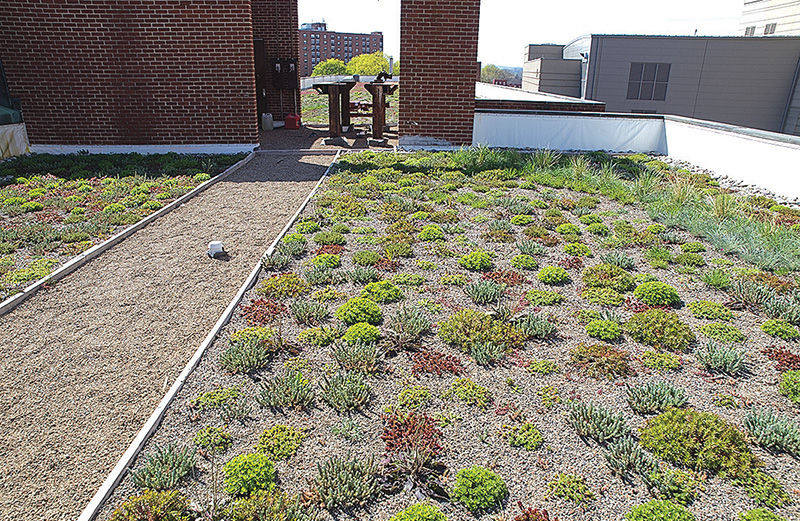 As green roofs have taken hold in cities with the strictest stormwater requirements, their success is also spreading to suburban environments. 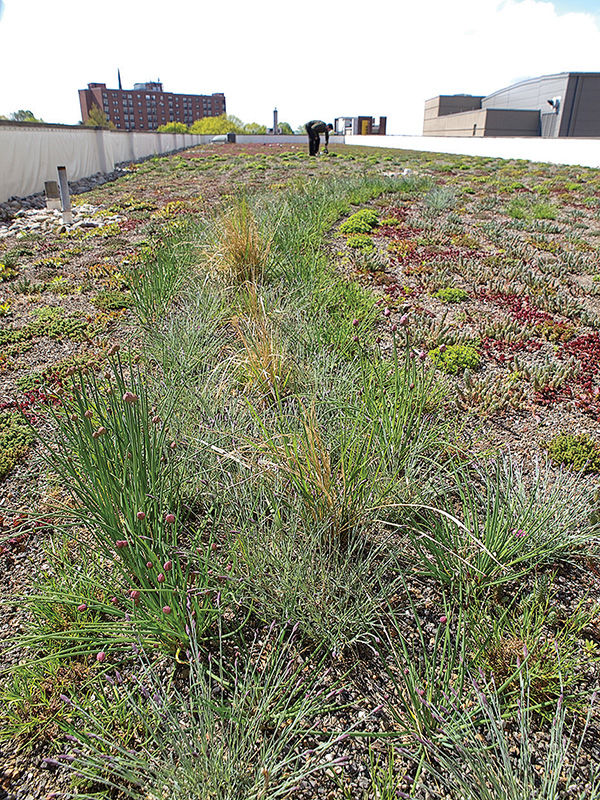 Green roofs, like this one in Lancaster, PA, are one option in areas where there is not enough room for stormwater retention ponds.

As green roofs have taken hold in cities with the strictest stormwater requirements, their success is also spreading to suburban environments.

Green roofs, like this one in Lancaster, PA, are one option in areas where there is not enough room for stormwater retention ponds.

When Rick Seavey first told municipal officials in Lancaster, PA, that he planned to install a green roof, they thought he was talking about paint color.

That was a decade ago, before affixing water-absorbing membranes and plants to the tops of buildings became a popular solution for businesses looking to absorb stormwater runoff from new construction. And the 16,000-square-foot green roof Seavey planned to build as CEO of the National Novelty Brush Co. would be the first for the South Central Pennsylvania city and the surrounding county of the same name.

Like many cities and counties in the Chesapeake Bay watershed, Lancaster city had adopted stormwater management regulations that required developers to offset the stormwater runoff that new buildings would generate. Most developers met their requirements through less expensive features, such as stormwater retention ponds.

But Seavey wanted to keep his family’s business in downtown Lancaster, where there wasn’t room for a retention pond near the new building. He decided that a green roof, though more expensive to install, would be the best option to satisfy the requirements and benefit the Bay — even if no one nearby was doing it.

“The closest firm that knew how to build one was in Boston,” Seavey said. “Architects had to come in from Philadelphia and Boston to help me.”

A decade later, green roofs like Seavey’s are emerging as a timely tool for urban areas looking to absorb their stormwater runoff, which is still the fastest growing source of water pollution in the Bay watershed.

Green roofs were the focus of the 14th annual CitiesAlive conference that took place in November 2016 in Washington, DC, where the nation’s capital was highlighted as a leader in green roof implementation to an international audience of 500. The city has installed more square feet of green roofs than any other in North America for each of the last five years.

Since 2014, the District's stormwater regulations have required new developments to retain the first 1.2 inches of rain that falls in a storm. In a city already crowded with concrete — and prevented from growing skyward by building height restrictions — experts say green roofs are often the best option to absorb water with limited space.

“If you’re a downtown developer, you basically have to do a green roof on your lot to capture rainfall there,” said Jeffrey Seltzer, associate director of the District Department of Energy & Environment’s stormwater management division.

While green roofs might be the best onsite option, developers can also take credit for green infrastructure installed elsewhere in the city through the District’s stormwater credit trading program. At an average cost of $15 to $20 per square foot, green roofs are one of the most expensive ways to absorb stormwater, and, after their soils are saturated, they can’t absorb as much water during a heavy rainfall as a large retention pond in a less developed area.

As green roofs have taken hold in cities with the strictest stormwater requirements, their success is also spreading to suburban environments. Counties and cities throughout the watershed are recognizing that green roofs are a good option for developers who need to curb runoff while providing additional benefits for residents.

Prince George’s County in Maryland has been contracting with private industry to install green roofs, rain gardens and retention ponds to absorb stormwater on 500 urban and suburban acres.

Adam Ortiz, director of the county’s Department of the Environment, said clean water regulations mean that his jurisdiction has to retrofit about 15,000 acres in the next 10 years with tens of thousands of runoff-capturing projects.

“One of the challenges is that government does not always do things quickly,” Ortiz said. “Every dollar is precious in government, and we can spend that dollar to leverage other social benefits if we do it thoughtfully.”

Prince George’s has about $1.2 billion to spend on these retrofits, generated from a stormwater management fee initially required, but now merely permitted, by state law. To stretch those dollars, Ortiz said, the county has been outsourcing these projects to private construction companies and was able to reduce the per-acre price of new stormwater controls by 50 percent. The county expects to have 950 acres of new projects constructed this year alone.

Daniel Nees, director of the University of Maryland's environmental finance center, said that the entire country, and especially the Chesapeake Bay region, is watching the District and Prince George's County to see how their public-private approach pans out.

Some communities, such as the 2,700 municipalities in Pennsylvania, might have to lean even harder on the private sector to meet their obligations without the fees that have generated funds in other areas, Nees said.

Ten years later, Seavey is still pleased with the green roof he installed, even if the concept hasn’t taken hold across the city as much as he’d like. Lancaster’s old buildings are difficult to retrofit to support the weight of green roofs.

For Seavey, installing one has extended the life of his roof to as much as 100 years. It has also kept his warehouse cooler. The eight species of sedum he planted have evolved over time, something he’s enjoyed watching as a business owner with a biology background. (He also doesn’t mind the occasional weeding that comes with the roof, which is accessible by ladder.)

“I hope more people realize the advantages” of green roofs, said Seavey, who has seen the water-absorbing capacity of his roof firsthand. “It allowed me to build a bigger building than I would have been able to, because of regulations from the city. And it really works.”