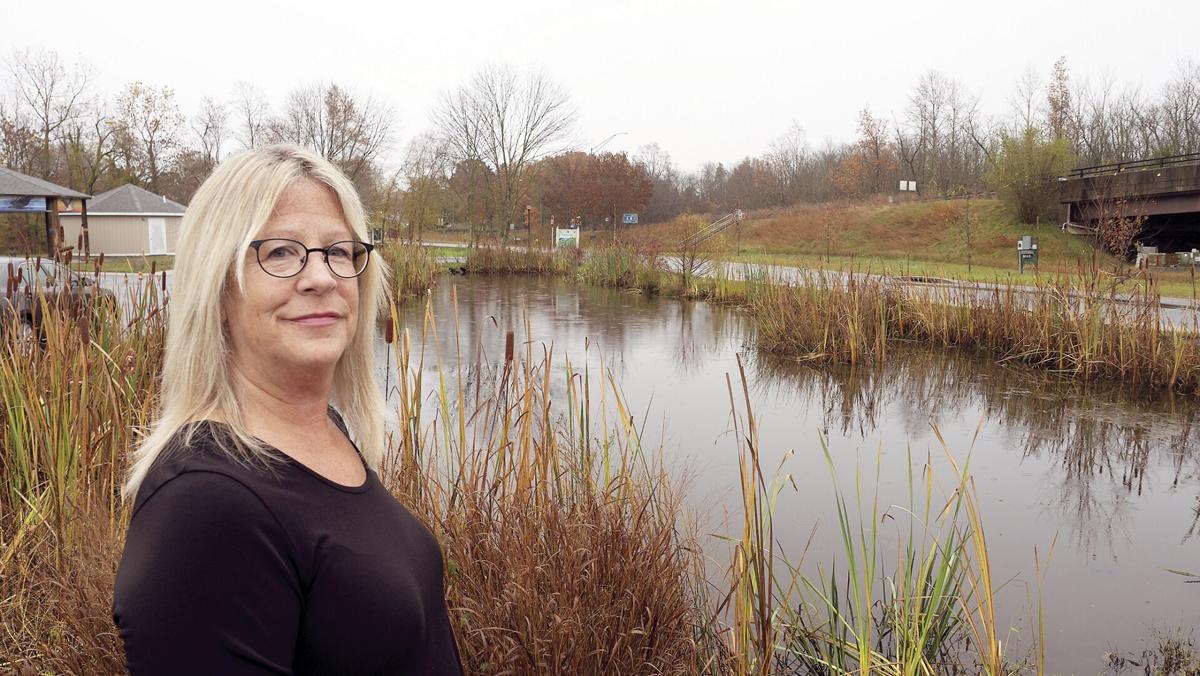 Leslie Grunden, assistant planning director for Caroline County, MD, and participant in Envision the Choptank, stands by a bioretention pond at the Wharves of Choptank visitor center. 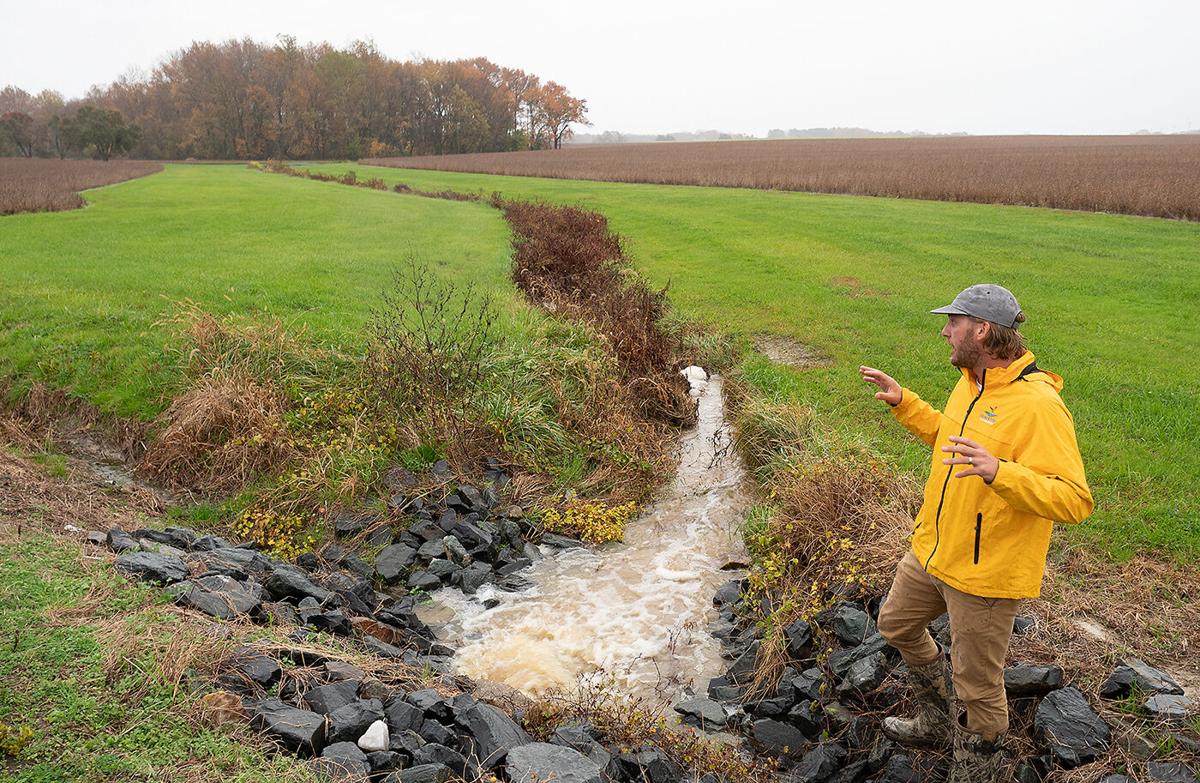 Under a historic 2010 agreement, the states in the Chesapeake Bay drainage basin, along with the District of Columbia, embarked on an ambitious plan to restore the nation’s largest estuary by putting themselves on a pollution diet.

Although their names didn’t appear on any agreements, local governments would bear much of the heavy lifting to achieve the needed nutrient reductions — evaluating their cleanup options and marshaling the resources necessary to do the work.

In many localities, especially rural communities, that’s a big ask. But along one Maryland river, nestled in a landscape of cornfields and small towns, a collaboration was created to help overcome those obstacles. Now, as the partnership charges past its fifth anniversary, it is pivoting to its next and most critical phase: turning promises into action.

The group aims to improve the health of the Choptank River while supporting the local economy, which revolves around seafood production, agriculture and tourism. But its participants also hope to demonstrate what can be accomplished when towns, counties, federal agencies and conservation groups work together.

“This is becoming a model for how we can bring the stakeholders together and work through a common-agenda process to achieve those goals,” said Matt Pluta, the Choptank Riverkeeper. “If we’re taking the same steps at the same time, we can get a lot more done.”

Envision the Choptank isn’t organized into a formal nonprofit. It doesn’t regulate or legislate. Rather, it’s part-think tank, part-meeting platform. Above all, supporters say, it’s about getting things done.

“It takes a lot to collaborate,” said Larisa Prezioso, a conservation assistant with the Eastern Shore Land Conservancy, one of the group’s earliest and most-vocal participants. “Being an environmentalist, I want to believe everything is possible. But you have to write grants and think about funding and who is going out to do the work.”

There is no lack of work to be done in the Choptank’s 1,000-square-mile watershed.

The Choptank is the longest river on the Delmarva Peninsula, rising in central Delaware and flowing southwest for about 70 miles before emptying into the Chesapeake on Maryland’s Eastern Shore. Its blue crab fishery measures its value in millions of dollars per year, and more than 90% of the surrounding watershed remains undeveloped.

“If we’re taking the same steps at the same time, we can get a lot more done.”  — Matt Pluta, Choptank Riverkeeper

But pressure from urban growth is mounting. Since 1996, the region has lost nearly 3,000 acres of forests, largely to development, according the National Oceanic and Atmospheric Administration.

Meanwhile, monitoring stations show that nutrient pollution has sharply increased since the 1960s due, in part, to heavy fertilizer use on adjacent farm fields.

The Choptank is in the buckle of Delmarva’s own broiler belt, one of the nation’s densest chicken production regions. Many farmers repurpose those chickens’ droppings as fertilizer for corn and soybeans, grains that are grown to feed those hungry flocks. Scientists say such practices have contributed to a large surplus of nutrients in the region’s soil. Nutrients carried by stormwater into nearby waters fuel algae blooms that deplete oxygen levels in the Bay, creating “dead zones” where aquatic life is all but nonexistent.

The river has lost about 70% of its underwater grass beds, which are an important nursery for young fish and crustaceans. In the upper portion of the watershed, nearly 50,000 acres of wetlands have disappeared since the Colonial era, representing 11% of the total Choptank drainage area. Such losses make it harder for the landscape to filter out harmful pollutants before they reach the river and the Bay itself.

To be sure, collaboration is not a new phenomenon in the Bay watershed. The Chesapeake Bay Program, which oversees the cleanup, is itself a conglomeration of federal agencies and representatives from the watershed’s states. Examples at the local level include the Upper Susquehanna Conservation Alliance in New York, Shenandoah Valley Conservation Collaborative in Virginia, and Lancaster Clean Water Partners in Pennsylvania.

What distinguishes Envision the Choptank is its foundation in a nationwide federal program. Nearly a decade ago, NOAA named the river a “habitat focus area,” making the region eligible for special funding and agency expertise. The Choptank is one of 10 places nationwide that have received the designation since its launch in 2012.

The agency’s focus is the restoration of oyster reefs in three Choptank tributaries: Harris Creek, the Little Choptank River and the Tred Avon River. The agency’s additional charge was to work with local organizations and communities toward meeting those restoration goals.

Envision the Choptank began hosting meetings in late 2015, said Joanna Ogburn, a conservation consultant and the collaboration’s sole staff member. After several get-togethers with more than 35 partner organizations and a telephone and mail survey of watershed residents, the group developed a 28-page “common agenda” in 2018.

“We want to meet the community where they are,” said Alan Girard, director of the Chesapeake Bay Foundation’s Eastern Shore office. “We don’t want to assume.”

Now, the collaborative’s plans are starting to become a reality. Last year, the National Fish and Wildlife Foundation awarded the group $1 million to design and install stormwater fixes on 200 acres of agricultural lands. Member organizations have been working to develop maps showing where those projects will have the most impact on water quality.

The partnership also has led to a regular convening, now held virtually in the COVID-19 era, of local and state government staff members representing about two dozen jurisdictions that work on environmental issues in the Choptank watershed.

In rural Caroline County, the Shore’s only landlocked county, those discussions have turned into grant proposals for a stormwater project and community education efforts in the predominately black community of Jonestown.

“We have really small staffs and not a lot of people. We’re so close to the ground we’re almost unseen,” said Leslie Grunden, Caroline’s assistant planning director. At the Envision the Choptank meetings, she added, “I can address the group and kill 10 birds with one stone.”