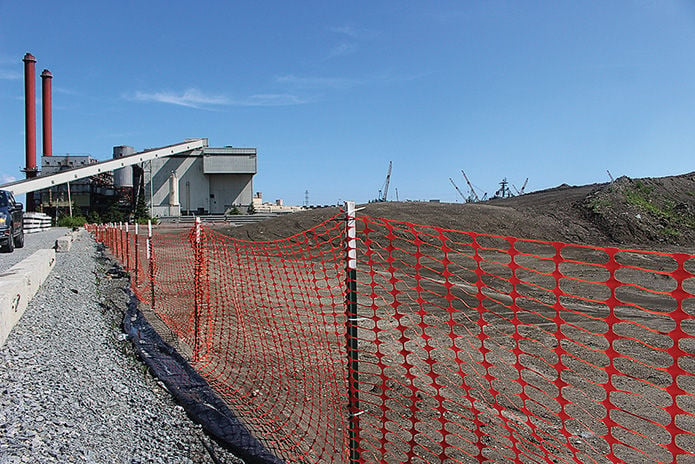 Sediments contained at the Atlantic Wood Industries Superfund site in Portsmouth, VA, will eventually be spread and compacted over the site. (Sarah Vogelsong) 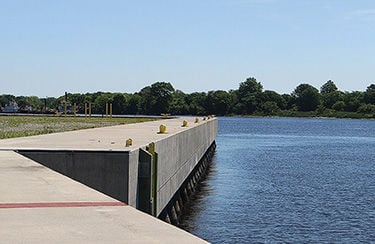 The Elizabeth River flows by the Atlantic Wood Industries Superfund site in Portsmouth VA. This structure is a containment wall for contaminated sediments dredged from the river constructed by the EPA as part of remediation. (Sarah Vogelsong)

For almost 70 years, the Elizabeth River in Portsmouth, VA, was the final destination for multiple streams of the oily, tarlike liquid known as creosote. A key ingredient used in wood preservation, the toxic chemical was as much a part of life in Norfolk as the industry that once relied on it to function: shipbuilding.

And nowhere was it found in greater concentrations than at the former Atlantic Wood Industries site, an old wood-processing center that began operating in 1926 and backed directly up to the river’s southern branch.

In certain areas, “if you stepped in the sediments, you would coat your leg with creosote,” recalled Randy Sturgeon, who has overseen the U.S. Environmental Protection Agency’s efforts to clean up the site under its Superfund program since 2004. “In some places it was 25 feet deep.”

Michael Unger, a professor at the Virginia Institute of Marine Science who has been studying the effects of the Elizabeth River contamination since the 1980s, remembered that “you could take a grab sample of the sediments and see the liquid creosote. You could see it and you could smell it.”

Today, much of that contamination is gone. Atlantic Wood, now operating as Atlantic Metrocast, is no longer in the wood business, having pivoted to the manufacture of precast concrete. The U.S. Navy, which over the years had used the site to dispose of waste, has ceased to do so and halted sludge flows into nearby wetlands. Polluted soils from the river bottom have been dredged and either contained behind an offshore wall or landfilled on Atlantic’s property, the latter an ongoing process.

The work isn’t done, but in an important step forward this March, the U.S. Department of Defense, U.S. Navy and Atlantic Wood agreed to reimburse the EPA and the commonwealth of Virginia almost $64 million in costs associated with remediating the contaminated soils and waters. Of that, $55.3 million will be paid by the Department of Defense and the Navy to the EPA, and $8.5 million will go to the state.

Atlantic Wood, which the settlement decree found “has limited ability to pay for response costs,” will reimburse Virginia and the EPA a total of $250,000 plus interest.

According to the most recent estimates, the cleanup will ultimately cost more than $126 million.

The agreement, filed in the U.S. District Court for the Eastern District of Virginia, was hailed by Virginia Secretary of Natural Resources Matthew Strickler as “a critical milestone in addressing historic contamination in the Elizabeth River.”

Part of the James River watershed, the Elizabeth is a three-branched river whose shores have been heavily industrialized for more than 200 years. In November 1993, the Chesapeake Executive Council declared the river one of three regions of concern (alongside Baltimore Harbor and the Anacostia River) for its “known toxic problems” and “significant potential … for toxic impacts on living resources and habitats.”

Some of these toxic impacts came from the chemicals found in creosote: benzene, toluene, ethylbenzene, xylenes and polycyclic aromatic hydrocarbons, or PAHs. Unger said that during the 1980s, VIMS tests in the Elizabeth “measured some of the highest concentrations that you could find anywhere in the world of PAHs.”

Other substances of concern included dioxin derived from pentachlorophenol (PCP), another wood-treatment chemical previously used by Atlantic Wood. Heavy metals such as lead, copper, arsenic and zinc also appeared, left over from the Navy’s sandblasting of ships during and after World War II, as did calcium hydroxide, a byproduct of the production of acetylene, a gas used for fuel, at the adjacent Norfolk Naval Shipyard.

A 1983 report by the EPA found that sediments in the Elizabeth (along with those in the Patapsco River in Maryland) had the highest concentrations of heavy metals found anywhere in the Bay watershed, “100 times greater than natural background levels.” Upstream of Atlantic Wood, the nonprofit Elizabeth River Project in 2005 found that 35 acres of the river off Money Point, where another wood-treatment operation had once stood, was a “biological dead zone.”

Besides the ecological impacts of the contamination, much of the alarm that surrounded it concerned its possible links with cancer. It was to look for that link — “to try to find a canary in that particular coalmine,” he said — that Wolfgang Vogelbein came to VIMS in 1989 and began working with Unger.

What they found was disturbing. The pair chose to focus on the mummichog, a small nonmigratory fish resembling a minnow, which is found in tidal waters and eaten by many larger fish. Because this species remains in its immediate environment year-round, it was a prime test case for examining the impacts of the contamination. Particularly at the Atlantic Wood site, Vogelbein said, “I was seeing a liver cancer prevalence higher than 30%, and over 90% of those animals had what we call precancerous conditions.”

Interestingly, although many of its oldest members showed the highest prevalences of cancer, the mummichog population was thriving in terms of numbers.

“They are a prime example of evolution in action. They’ve developed a resistance to the acute toxicity,” Vogelbein said. “It’s fascinating from a scientific standpoint.”

It was also a red flag. As Unger pointed out, “If we’re exposing and changing the genetic composition of a population … who’s to know what else is happening to the ecological environment where these high-contamination events are taking place that we aren’t aware of?”

Since cleanup efforts began, the researchers have seen cancer prevalence among mummichog decline, particularly in recent years. Up at Money Point (where a different approach to remediation has been taken), Elizabeth River Project Deputy Director Joe Rieger reported that the prevalence of cancerous and pre-cancerous lesions among mummichog has dropped, and the number of species observed in the waters has risen from 4 to 26.

“We have otters at the site now,” Rieger marveled.

In an odd twist, however, cancer prevalence rates among mummichog have proven difficult to test in the waters off the Atlantic Wood site — because much of this area no longer exists.

After years of study, the EPA determined that the best way to remediate the Atlantic Wood site was to build a sheet pile wall off the banks of the Elizabeth just east of the shore. Of the 360,000 cubic yards of sediment dredged from the waters as part of remediation, just less than half was placed behind a 12-foot-wide wall with an expected 100-year lifespan and capped in place. What had once been river was now land, and under the March settlement agreement, it belongs to the commonwealth.

The remaining contaminated sediments — about 200,000 cubic yards — are being systematically spread over the Atlantic Wood site and also capped in place with 12 inches of permeable stone topped with an additional 4-inch barrier to keep rainwater from infiltrating and allowing the contamination to seep back into the river.

“We looked at shipping this stuff offsite, but it would probably be two

The containment strategy might be cheaper, but it’s accompanied by its own complications. The biggest, Sturgeon said, “is that we have a manufacturing facility that we’re trying to clean up while they’re still producing product.” What that means is that as the EPA spreads and compacts the contaminated soils in one area, Atlantic Metrocast goes about its business elsewhere on the site. Once the EPA needs to focus on a new area, the concrete operation must up sticks and shift as well.

The process may be cumbersome, but it’s also in line with the EPA’s goal of ensuring that Superfund and brownfield sites be put back to productive use, Sturgeon said.

“EPA goes to a lot of effort to work with developers and landowners to make sure land can be reused in a way that’s safe,” he said.

In the case of the Atlantic Wood site, all of the possible reuses are industrial: the March agreement stipulates that the property can “not be used for residential or other non-industrial purposes (such as a day care center or agricultural development) that may present an unacceptable risk to human health from contamination remaining on-site after the cleanup is complete.” Furthermore, no groundwater can be used as a source of potable water.

Exposure to creosote vapors can irritate peoples’ lungs, and skin contact with the chemicals can cause blistering and peeling or eye damage, according to the U.S. Centers for Disease Control. Regular skin contact over time can result in skin cancers, according to the Agency for Toxic Substances and Disease Registry

The EPA’s approach to handling the contamination isn’t the only possible one. Upstream at Money Point, the Elizabeth River Project has spearheaded a cleanup effort that takes a different approach. Rather than containing contaminated sediments behind a wall and losing additional habitat in a river that has become narrower and deeper, the group has focused on removing the impacted sediments and restoring the wetlands they once polluted.

“Ultimately, we are glad that the [Atlantic Wood] site was cleaned up,” Rieger said. “We envisioned a different process of how to address the contamination. … There’s no silver bullet for sediment cleanup.”

The EPA is about halfway through with the onsite capping, Sturgeon said, and expects to complete the job by fall 2019 — assuming that rainfall doesn’t slow the compaction process, as it did last summer.

At the Virginia Institute of Marine Science, Unger and Vogelbein are preparing for another round of monitoring to track the progress of the cleanup’s effects on fish and sediments — what Unger called “a physical on the river.”

The last comprehensive tests were conducted in 2016. During the fall of 2018, the researchers collected 850 fish, whose livers are preserved in test tubes waiting for analysis, as well as sediment samples from 14 sites on the Elizabeth. Analysis is slated to begin in July.

Both cautioned that, while progress has been made, the Elizabeth is still not what it was before industrialization.

“There are places that have not yet been remediated that there is still liquid creosote at the bottom of the river,” Unger said. “It’s better than it was, but we’re not to goals yet.”