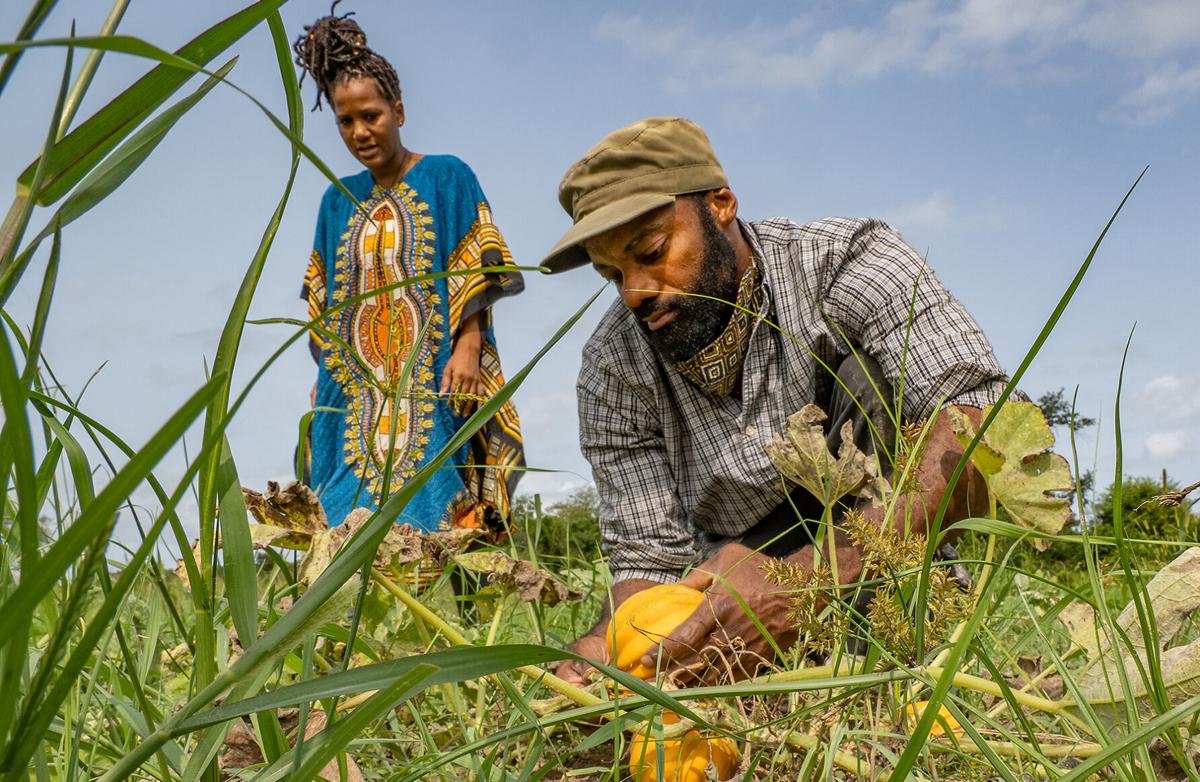 Thelonius Cook checks on his fall harvest at his farm in Birdsnest, VA, as volunteer Deanna Jamison looks on. The Mighty Thundercloud Edible Forest is patterned on indigenous African farming techniques. 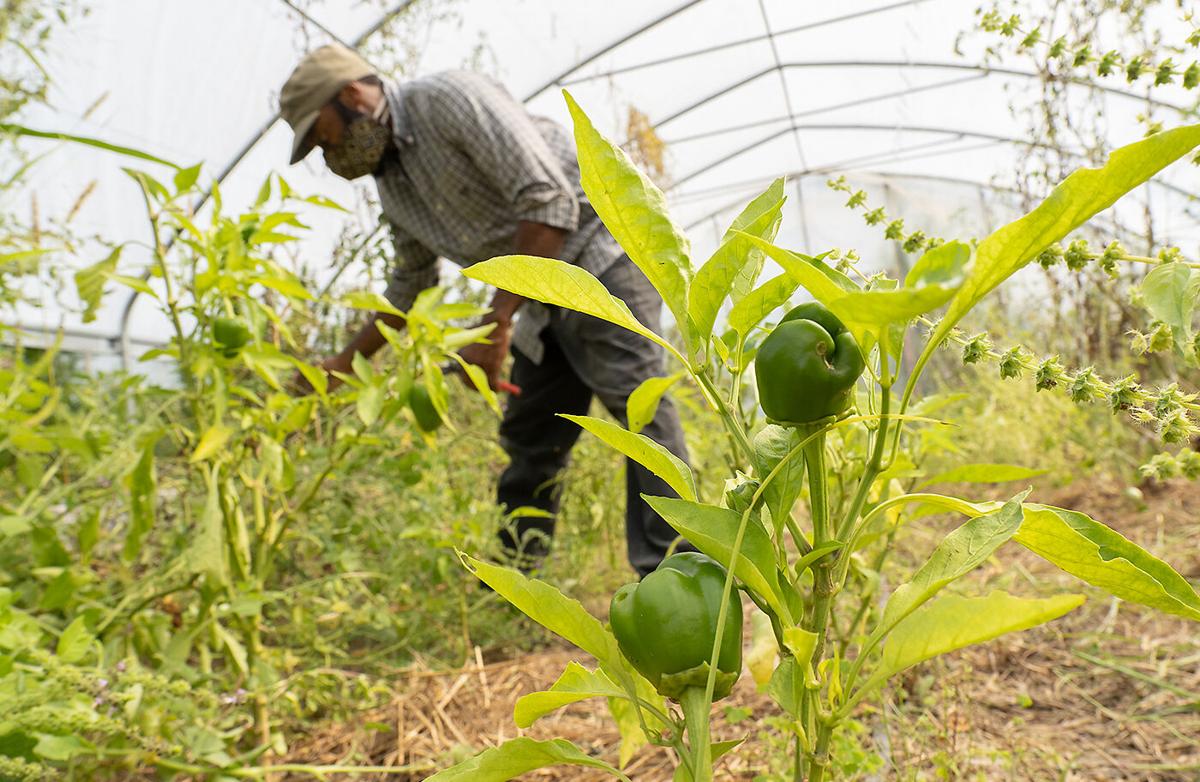 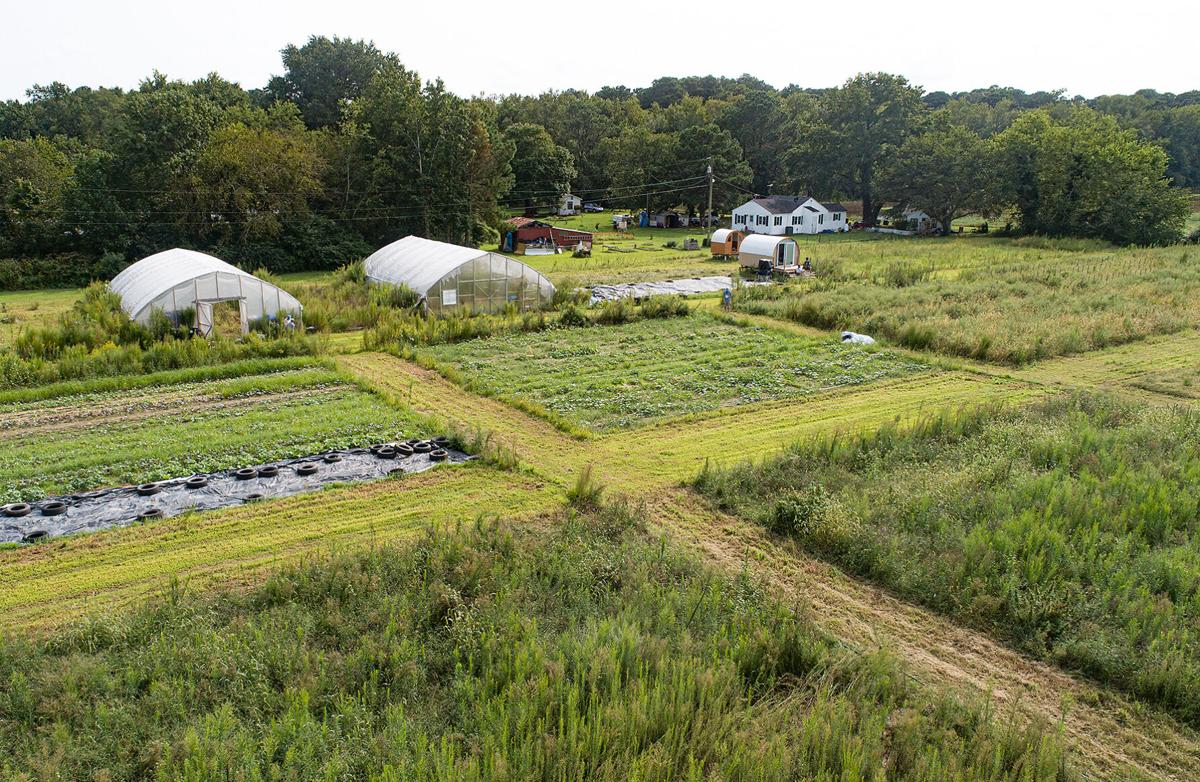 Thelonius Cook's 7.5-acre farm on Virginia’s Eastern Shore is part of a growing movement of Black-owned agricultural operations that embraces organic practices that can be traced to African cultures. 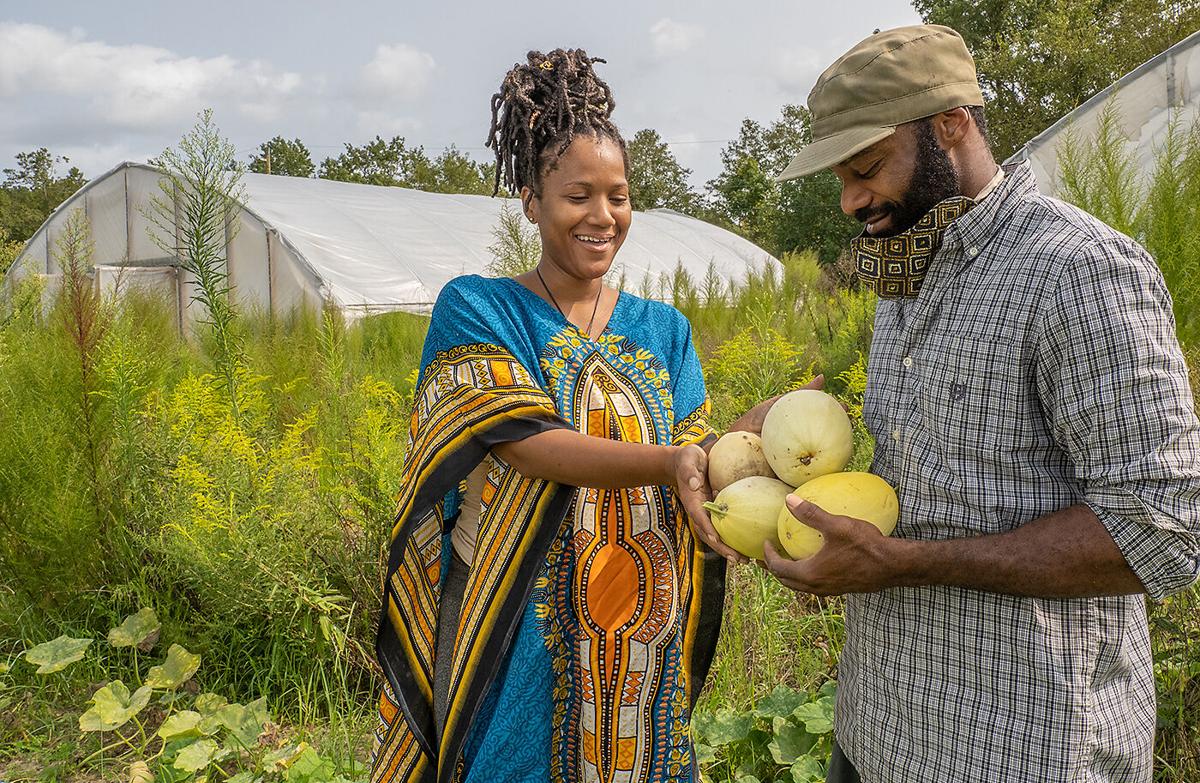 Farmer Thelonius Cook and volunteer Deanna Jamison look over some of the produce harvested from Cook's land on Virginia's Eastern Shore.

Cook uses certain plants to attract pests and keep them away from his crops. He also avoids tilling the soil and sows “cover crops” in the fall to reinvigorate fields — all techniques drawn from his African ancestors. In such ways, Cook said he is honoring his heritage while protecting the environment.

“Everything I do, I try to encourage a natural ecosystem, a closed loop,” said Cook, founder of the Mighty Thundercloud Edible Forest on Virginia’s Eastern Shore.

The share of farms operated by Black people nationwide has plummeted from 14% at its peak in 1920 to 1.7% as of 2017, according to the U.S. Department of Agriculture. Historians point to myriad causes for the decline, but chief among them is racism.

Persistent racist violence forced many African Americans in the South to flee to northern cities. For Blacks who remained, White-dominated loan boards often blocked federal aid from reaching their farms if they were members of the NAACP or other civil rights organizations. Some never prepared wills, leaving their acreage to multiple heirs who ultimately lost the land to tax sales or real estate hucksters.

Cook is part of a small but growing movement within the Black agricultural community that recasts farming — which, for African Americans, has long been associated with forced labor — as a path toward dignity, empowerment and greening the Earth. They are writing a new history, one newly sprouted farm at a time.

Cook grew up across the Chesapeake Bay in Hampton. Agriculture was in his genes. His family raised a garden of green beans, collard greens and other vegetables. His father once grew flowers for his own florist business.

But Cook wound up heading in another direction, studying information technology at James Madison University and jetting off to East Africa to work for an international development organization.

In places like Tanzania and Mozambique, he worked closely with farmers, showing them ways to run their businesses more efficiently. Along the way, those farmers gave him informal lessons in the region’s homegrown agricultural practices.

Many of those practices have survived for centuries. For instance, because many African farmers lack capital to buy tractors or other large pieces of equipment, tilling — churning the soil to spread oxygen and nutrients throughout the root zone — simply isn’t possible on a large scale. So, they turn to compost and animal manure to revive their soil.

After getting a master’s degree in sustainable development from Royal Holloway, University of London, he returned to Hampton Roads in 2014. When not working as a freelance web developer, he started preparing a new life for himself and his father’s old flower field in Northampton County on the Bay’s Eastern Shore.

The family had leased the 7.5-acre plot to farmers for decades. The relentless rotation of wheat and soybean crops had left the soil nearly exhausted, Cook said. “You couldn’t take a hand tool and break it.”

With little expectation beyond growing some food for himself, he began applying the farming lessons he had acquired overseas to his own acreage.

Don’t bother looking for neat rows of crops. Cook’s planting beds are loosely organized. Weeds are given room to grow. The only structures in sight are two high tunnels (arched, greenhouse-like growing buildings) and a raised wooden workshop.

If it looks more like a forest than a farm, that’s the point, Cook said.

“Any time you see a forest, it’s usually a sustainable ecosystem,” he said. “There are no pests out of control. The dirt is usually black earth.”

Not just for White men

Part of the reason that Black farmers remain so rare is that working the land still gets a bad rap, Cook said. “They’ve been made to turn away [from farming] because of our history in this country” with slavery, he said. The typical reaction he hears is, “I don’t want to go back to the plantation.”

Many black farmers share similar experiences. “When I first got into this in the early ’80s and told people I was going to school to study agronomy [soil science], folks looked at me like, ‘Why would you do that?’ ” said Mchezaji “Che” Axum, director of urban agriculture and gardening education at the University of the District of Columbia. Of the dozens of classmates in his major, only three were people of color, he recalled.

In recent years, Axum said he has noticed a “big movement” among Black farmers toward embracing organic methods. These aren’t practices borrowed from White organizations and individuals but rather from within their own cultural heritage, reaching back to the verdant plains and terraced slopes of Africa.

“You can’t really start Black agriculture with slavery and servitude,” Axum said. “It’s way before that.”

A key thought leader and practitioner in the movement calls it “Farming While Black.” In her 2018 book of the same title, Leah Penniman outlines a step-by-step business plan for aspiring Black and Brown farmers seeking a harmonious relationship with the environment.

For Penniman, the path to farm ownership began with a summer job at an urban food project in Boston operated by and largely for people of color. But that was followed by one gig after another at farms throughout the Northeast where the faces she saw were almost invariably White.

“It’s White men who are presented as experts” of organic agriculture, Penniman said. “I had reached a crisis point in my early 20s about whether I was really an agriculturalist.”

A five-month visit to Ghana helped change her mind. Back at home, she forged bonds with other Black farmers. Together, they launched in 2010 the first and now annual National Black Farmers and Urban Gardeners Conference. That year, she struck out on her own, founding the Soul Fire Farm in Petersburg, NY, about 25 miles east of Albany.

Along the way, she discovered that many of the practices embraced by White organic farmers also existed in African and Afro-Caribbean agrarian societies. Among them: a Haitian method of rehabilitating eroded hillsides with trenches and vegetated strips, southern Africa’s Ovambo people’s practice of using raised beds, the Kenyan trick of hurling mucky soil uphill to form terraces.

At Soul Fire Farm, food is a platform for social transformation. Until COVID-19 washed out this year’s programming, the farm offered people of Black, Indigenous and Latinx backgrounds opportunities to work and learn organic farming techniques. The cost is on a sliding scale of $100-$1,500.

Since 2014, the farm has been partnering with the Albany County District Attorney’s Office to give youths caught up in the court system a 50-hour training program as an alternative to being incarcerated. Penniman said that all aspects of her work have gained urgency this year after police killings of Black people triggered massive protests across the country.

“Unlike maybe past generations where we see issues as really siloed, the movement for Black lives sees all the issues as integrated. We can’t just isolate one issue,” she said.

Back in Virginia, Cook praises Penniman’s book for resetting the narrative about Black agriculture and slavery.

With each passing year, the soil beneath Cook’s crops gets darker and healthier. He sells food at three farmers markets on the Eastern Shore. And he participates in the community supported agriculture program for the Hampton Roads region, which seems to be one of the best marketing avenues for local farmers: Customers purchase advance subscriptions for regular food deliveries. About three-dozen clients have signed up with Cook’s farm.

He hopes to inspire other new and aspiring Black farmers. He speaks at conferences (virtually these days), hosts training events and boasts healthy followings on Facebook and Instagram.

As he sees it, the slightly unruly farm is an oasis of green that, unlike many of its neighbors in the rural region, can point to being metaphorically green as well. All of it accomplished while being Black.

Jeremy -- what an awesome article. The topic is not something that's reported on much. Very interesting, hopeful topic. Also well written, researched and photos are perfect. Thank you for your work.