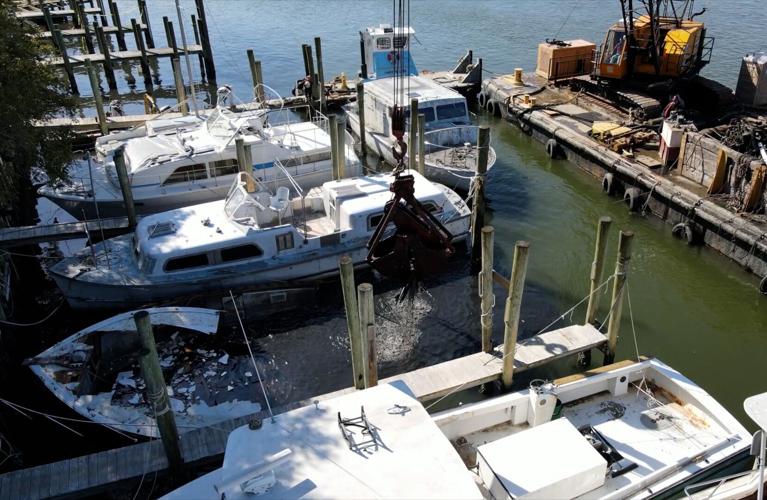 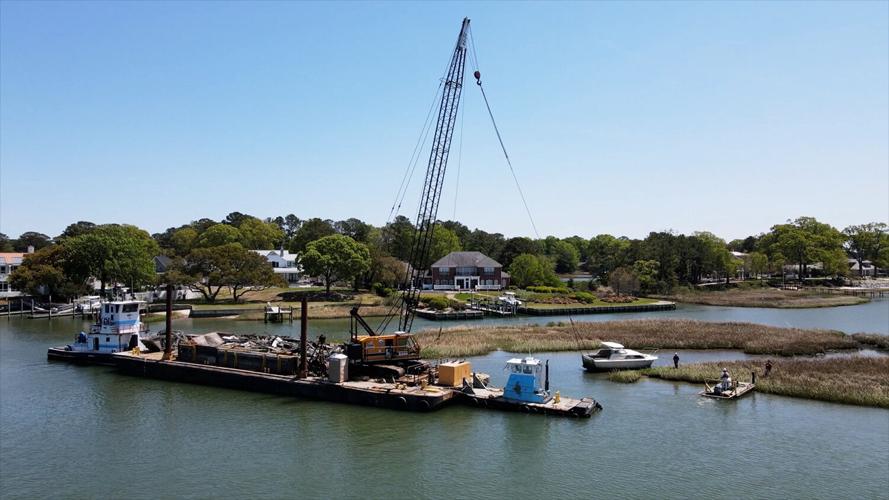 A recreational boat abandoned in a marshy area of the Lynnhaven River was carefully removed in April by a nonprofit raising private funds to do the work. (Courtesy of the Vessel Disposal and Reuse Foundation) 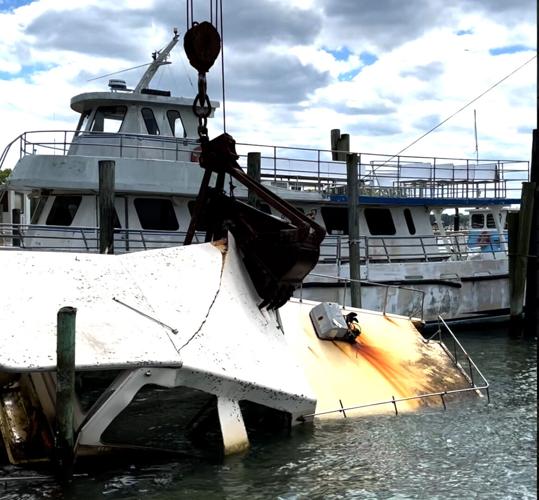 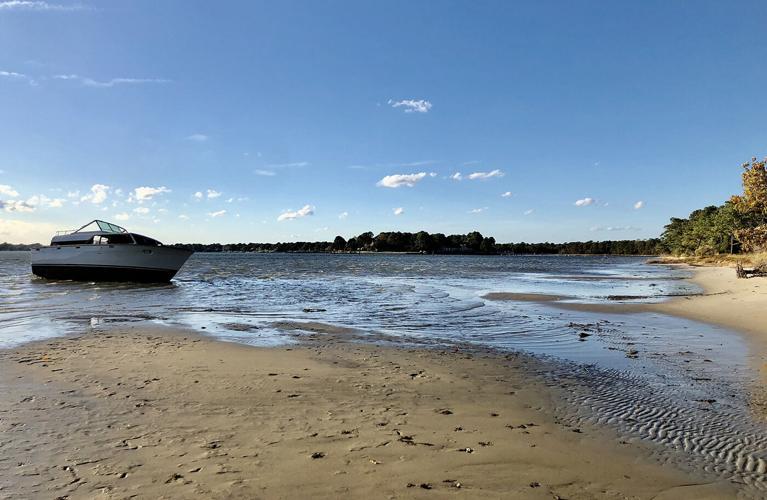 Abandoned boats like this one can wash onto shore into ecologically sensitive areas as they become a large source of pollution to the waterway. (VDRF)

Whether lurking as hazards beneath the water’s surface or becoming eyesores as they drift ashore, abandoned boats are a growing problem in Chesapeake Bay waters — especially in Virginia. And they’re not as easy to get out of the water as they were to put in.

The U.S. Coast Guard has documented 170 abandoned and derelict vessels in Virginia waters since 2013, and state officials are building a list of even more that need to be removed.

Some boats are set adrift by storms and, in the absence of a fastidious owner, stay that way for months or years. Recreators who bought a boat during the pandemic may be realizing they no longer want to maintain one.

But one of the biggest concerns involves boats built during the affordable fiberglass boat boom that began in the 1960s, which are reaching the end of their lifespans. The number being abandoned appears to be on the rise.

“When luxury is built in,” reads one 1980 ad for a 37-foot cruiser with a fiberglass hull, “it doesn’t wear out.” Made with reinforced plastic-and-glass materials, these boats don’t blend into a marshy shoreline as they decompose, like their wooden forebears. Instead, they persist in the environment, shedding microplastic particles and leaching toxic materials over time.

The boats often end up left in a marina or set adrift because the owner feels like there aren’t other options for disposal. Getting rid of a defunct boat can easily cost more than the boat is worth.

Unlike old cars, whose mostly metal frames can be sold or donated for scrap materials, the fiberglass components of a boat “are practically worthless and tend to cost more to remove, prepare for disposal and dispose of than their parts are worth,” states a recent report from the Virginia Coastal Policy Center at William & Mary Law School.

Abandoned boats pose navigation problems for other boaters and are hazardous to the environment. Some slowly disintegrate in the marina where an owner has left them. Others drift into marshes or are purposefully sunk near a shore. Fuel, oil, paint, sewage and chemicals leaching from batteries and cleaners onboard threaten the environment as the vessel drifts or sinks.

Not to mention, “the longer it’s out there, the more expensive it is to remove,” said Karen Forget, executive director of Lynnhaven River NOW, who has for years received calls from residents concerned about sinking or stranded boats near Virginia Beach. “They want us to come up with some kind of solution for what to do with it.”

Once it’s dead in the water, removing an abandoned boat costs thousands of dollars and up to tens of thousands depending on where the boat is located and how much it has already disintegrated. And getting it back out of the water — whether by towboat, crane or claw — comes with all sorts of red tape.

The Lynnhaven group, along with Virginia’s Coastal Zone Management Program and the Clean Virginia Waterways project at Longwood University, has applied for a grant from the National Oceanic and Atmospheric Association’s Marine Debris Program to fund more boat removals. The federal program funneled nearly $2 million into 10 marine debris removal programs in states in 2021, helping them tackle a backlog of derelict vessels decomposing in their waters.

The Coastal Zone Management Program, operated under Virginia’s Department of Environmental Quality, has largely completed a report on the status of the state’s abandoned boat problem. First drafted in the fall, the document includes policy suggestions for giving boat owners better options for disposal, funding removals and addressing the underlying issues contributing to an uptick in abandoned vessels.

As of late May, the report was waiting for approval by the Gov. Glenn Youngkin’s administration.

Meanwhile, the agency has been working on an inventory of abandoned boats to help prioritize removals once funding becomes available.

But Laura McKay, manager of the coastal management program, said the problem continues to grow.

“We have got to turn off that faucet, or we’re just in big trouble,” she said.

Mike Provost had recently retired from the U.S. Navy when he got curious about an abandoned 36-foot cabin cruiser left tied to a tree in Long Bay Pointe off the Lynnhaven River.

“I made a couple calls and quickly determined no one was going to do anything about it,” he said.

Virginia’s current approach to the problem of abandoned vessels is piecemeal and painstakingly slow. The authority to remove vessels is divided among several agencies, depending on where the boat is located and other factors. That leaves many structures in limbo as to who’s responsible for removal.

So Provost began fundraising to remove the boats himself, ultimately starting a nonprofit, the Vessel Disposal and Reuse Foundation. He raised the $11,000 needed to remove that first boat, which eventually ran aground at First Landing State Park, with a GoFundMe page.

Since December, the organization has removed nine boats from the Lynnhaven River area. Many of them had been there for years. Provost learned a lot from that first removal and has since worked with a marine salvage contractor to do the heavy lifting.

If the boat were to leak oil while being removed, the person or group removing it bears the liability in many cases. If a person disposed of a boat illegally, they may have also removed any identification that would help find and transfer legal ownership of the vessel.

Through tracking down boat owners, Provost has developed a better understanding of the types of situations that lead them to abandon their vessels. Most, he said, are elderly, facing financial trouble, physically or mentally handicapped or addicted to illegal substances.

Provost estimates that his organization has removed 100,000 pounds of marine debris from waterways so far.

“That’s like removing tons of beach trash, which is crazy to me,” he said.

He’s already begun raising an additional $75,000 to remove the next batch of vessels with plans to tackle a “boat graveyard” in the North Landing River where an estimated 13 boats have been abandoned next to a natural area preserve.

Provost knows he can’t keep up with the ongoing influx of abandoned boats if the underlying issues aren’t addressed, and he hopes the state efforts will start to stem the tide.

Though Virginia law considers it a Class 3 misdemeanor to abandon a vessel in a waterway, the $500 fine is much less than the potential cost of removing it. Without a clear process for safe disposal, many people abandon their boats out of desperation.

In the Chesapeake watershed, only Maryland has a steady source of funding to remove abandoned vessels, according to NOAA’s Marine Debris Program. Maryland has for years funded its abandoned boat and debris program through a 5% excise tax on all boats purchased in the state. The money helps keep channels dredged for boat navigation and provides up to $500,000 per year for removing abandoned vessels, according the Virginia Coastal Policy Center report.

Florida, California and other coastal states have also developed ongoing funding mechanisms to pay for the removal of derelict vessels.

A draft of Virginia’s abandoned vessels report suggests the General Assembly steer more funds toward boat removals, possibly through a new fee paid when a boat is registered. Those funds could also support programs to improve disposal options and prevent abandonments.

The Coastal Policy Center’s paper suggests that Virginia legislators could also approve a “liability shield,” similar to Maryland’s, that protects agencies and individuals from the financial and legal risks associated with the removal of abandoned vessels.

Boat owners who want to dispose of a vessel properly will find it’s not easy in Virginia. State websites don’t offer guidance, leaving boat owners to call around and ask if local landfills will accept a large fiberglass hull they can’t sell elsewhere.

Acknowledging that this is a problem in multiple states, one website suggests cutting a fiberglass boat into pieces with a chainsaw so a landfill will accept it. Some companies also offer boat removal services.

“An old car has scrap value of a few hundred dollars. But old fiberglass boats — there’s usually nothing salvageable or salable and it costs money to dispose of them correctly,” said Katie Register, executive director of Longwood’s Clean Virginia Waterways.

State officials are looking into whether fiberglass from vessels can be shredded and burned as fuel and usable ash by a cement factory. Internationally, fiberglass wind turbines are providing alternatives to coal ash for some cement manufacturers.

Rhode Island has a vessel-recycling program that helps fuel cement manufacturing there. Virginia officials have begun discussions with a local cement plant to that end. The plant could need environmental permits, though, such as one for air pollution, to conduct a pilot project.

Other states offer vessel turn-in programs that, once disposal options are arranged, can save state agencies the cost and effort of removing vessels that might otherwise become abandoned.

“It’s much less expensive to dispose of a boat if someone turns it in and shows they own it,” Register said. “It costs one-tenth as much as a boat that’s been abandoned in the environment.”

Abandoned vessels are just one source of pollution addressed in Virginia’s overarching Marine Debris Reduction Plan, first created in 2014 and updated in 2021. The state has made progress tackling other forms of plastic pollution such as bags, polystyrene and balloons. But the abandoned boats problem has risen as a recent priority as fiberglass vessels age out.

“I would argue that all of these are priorities,” Register said. “We can stop using [plastic] straws at restaurants and prevent pollution from fiberglass boats. It’s an all-hands-on-deck situation.”