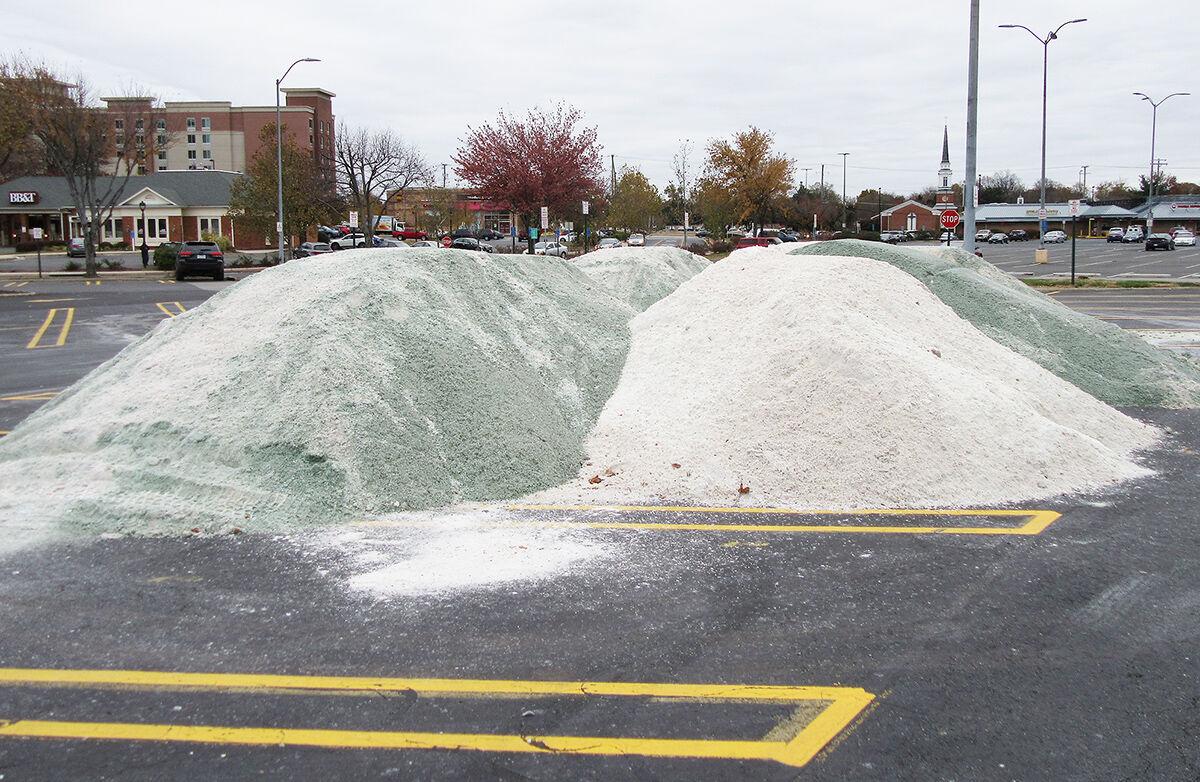 An uncovered salt pile stands in the parking lot of a shopping plaza in Springfield, VA. (November 2018/Glenda Booth) 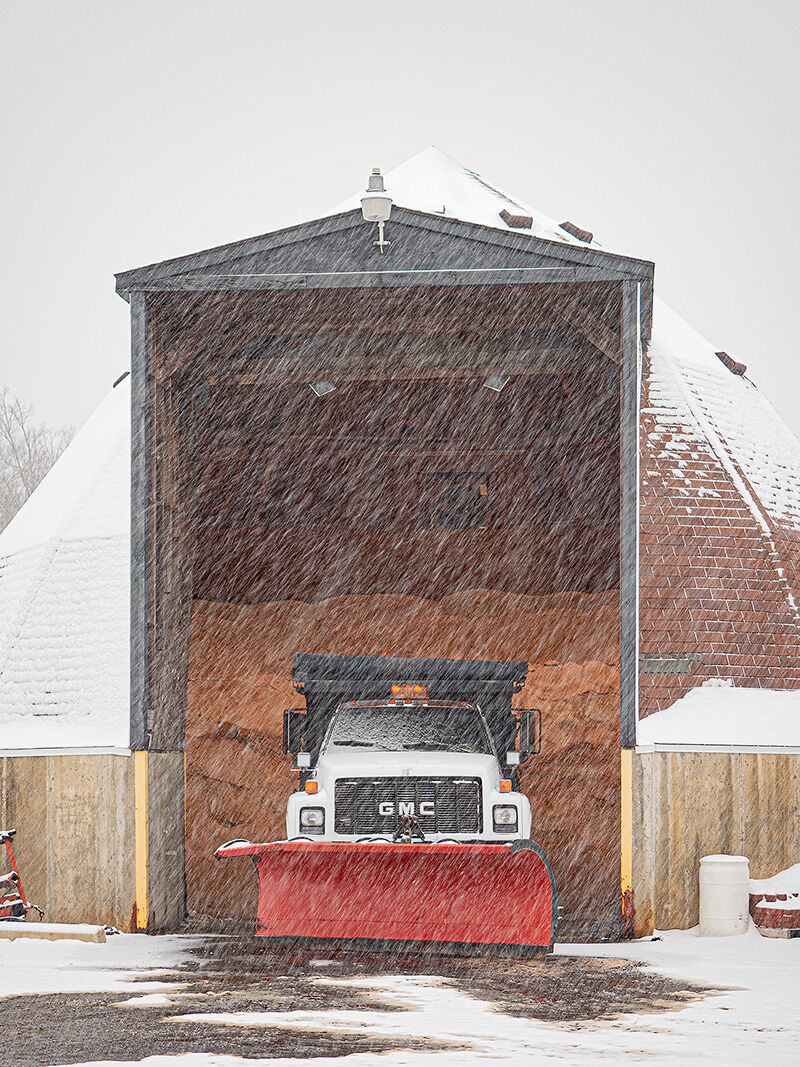 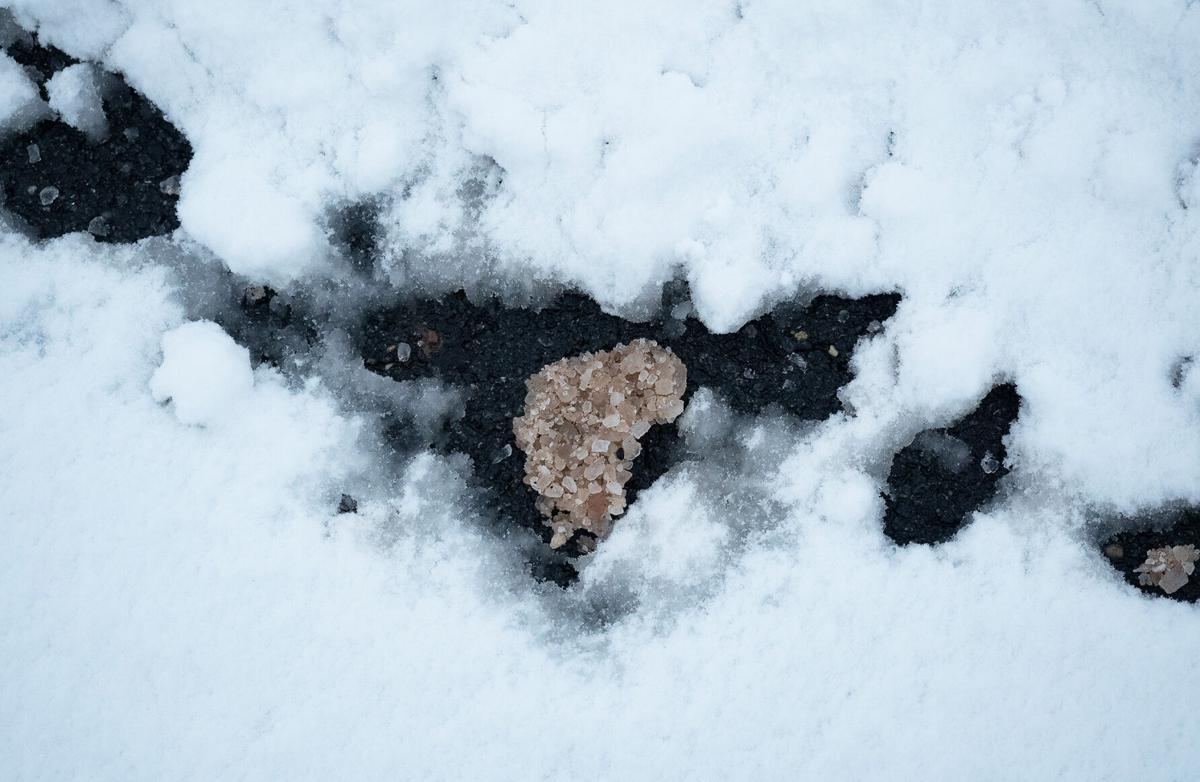 Hoping to reverse a serious threat to the health of Northern Virginia streams, state officials have assembled a hefty toolkit aimed at helping the region’s paved surfaces go on a reduced-salt diet.

Wintertime salt use to melt snow and ice on roads, parking lots and sidewalks has been increasing for years across the region, and it’s known to have impaired aquatic life in at least one Potomac River tributary, Accotink Creek. Other streams, and even drinking water reservoirs, are similarly threatened.

In January, the state Department of Environmental Quality unveiled a salt management strategy for Northern Virginia, spelling out a plethora of steps the government, businesses and citizens could take to reduce the environmental impacts of de-icing.

“Our goal is not to say, ‘Stop using salt,’" said Will Isenberg, a water quality specialist in the DEQ’s Watershed Programs and Office of Ecology. “Our goal is to try to strike a balance [between the safety benefits of de-icing and its harmful impacts].”

The strategy lays out more than 400 pages of background and dozens of suggestions for how everyone, from municipal snowplow drivers and snow-removal contractors to homeowners, can reduce wintertime salt use without sacrificing safety.

Work on the toolkit began three years ago, after state regulators imposed a “pollution diet” on stretches of Accotink Creek because of excessive chloride levels there in winter. Under that diet, or total maximum daily load in regulatory lingo, Fairfax County is under orders to take steps to restore water quality.

To draft the strategy, the DEQ assembled a group of 63 individuals representing 43 stakeholders in Northern Virginia and held a series of meetings.

Salt spread on pavement to melt snow and ice dissolves in the melting runoff. Excessive salt can harm aquatic insects, frogs, salamanders and freshwater fish in streams, and it can kill trees and vegetation along the roads. In drinking water supplies, it poses a human health hazard, particularly for people with hypertension or heart problems. Salt also can corrode roads, bridges and vehicles, shortening their useful lives.

Other streams in Northern Virginia have not been analyzed as thoroughly as Accotink, but monitoring by the U.S. Geological Survey of neighboring watersheds detected spikes of “specific conductance,” an indirect measure of the presence of sodium or chloride in water.

The problem is not limited to Northern Virginia. A 2014 study reported that heavy use of de-icing salts had raised salinity levels beyond what’s good for aquatic life in 40% of urban streams nationwide.

Rising salinity is a symptom of a broader ailment afflicting Northern Virginia streams. Pavement and buildings in the heavily suburbanized region cover 26%, on average, of the land in stream watersheds, increasing polluted stormwater runoff. Studies have shown that streams begin to show ecological impacts when as little as 2% of their watersheds are covered by impervious surfaces, and degradation becomes significant once the percentage exceeds 10%.

For Accotink, the DEQ was required to draw up plans to reduce chloride levels in the stream. Agency officials say they developed the salt management strategy as a way to avoid having to take more regulatory action on other regional streams. They say regulation alone won’t be enough to reverse trends anyway, because a significant amount of the salt washing into streams is coming from private property that is not subject to regulation.

“There are no mandates,” Isenberg said. Rather, he added, ‘’There is an opportunity for everybody to win through this, be it cost savings, reduced impact or what have you.”

Lauren Mollerup, assistant maintenance administrator in Northern Virginia for the state Department of Transportation, said highway crews already have adopted a number of best practices aimed at reducing salt use by applying it more efficiently. Even a small change in the amount of salt applied can make a big difference, with about 17,000 lane miles of roads and highways to treat in the region, more than enough to drive to California and back three times.

A similar salt management plan produced in Minnesota five years ago, on which the Northern Virginia strategy is modeled, yielded salt-use reductions of 30–70%. That translates into cost savings for taxpayers, property owners and homeowners.

The key to judging the strategy’s success, though, will be whether and how quickly chloride reductions happen in streams.

There’s something for everyone in this voluminous document, which is divided into sections, each written specifically for a particular user of de-icing compounds. The strategy includes measures that, except perhaps in rural areas, have become widespread, such as applying heavily salted water, or brine, to pavement before a storm arrives.

The bottom line: A little salt goes a long way. One 12-ounce mug of sodium chloride — common table salt — is enough to melt snow or ice on a 20-foot-long driveway or on 10 sidewalk squares.

The plan provides a menu of alternative materials and methods for preventing or clearing snow and ice. Homeowners, for instance, are encouraged to look at spreading bird seed on top of snow or ice instead of rock salt. The seed provides traction on slippery surfaces, and cleanup is less of a chore because birds eat most of the seed.

Now that the strategy has been published, the state is handing off to the Northern Virginia Regional Commission the tasks of spreading the word about it and monitoring its effectiveness.

But Sarah Sivers, who heads the DEQ’s water quality planning team, cautioned, “This is not a short-term fix.” It’ll take a long-term effort to bring down salinity levels in streams, she added, but the toolkit is a first step.

The DEQ is taking public comments on the salt management strategy through Feb. 22. To weigh in, email David.evans@deq.virginia.gov.