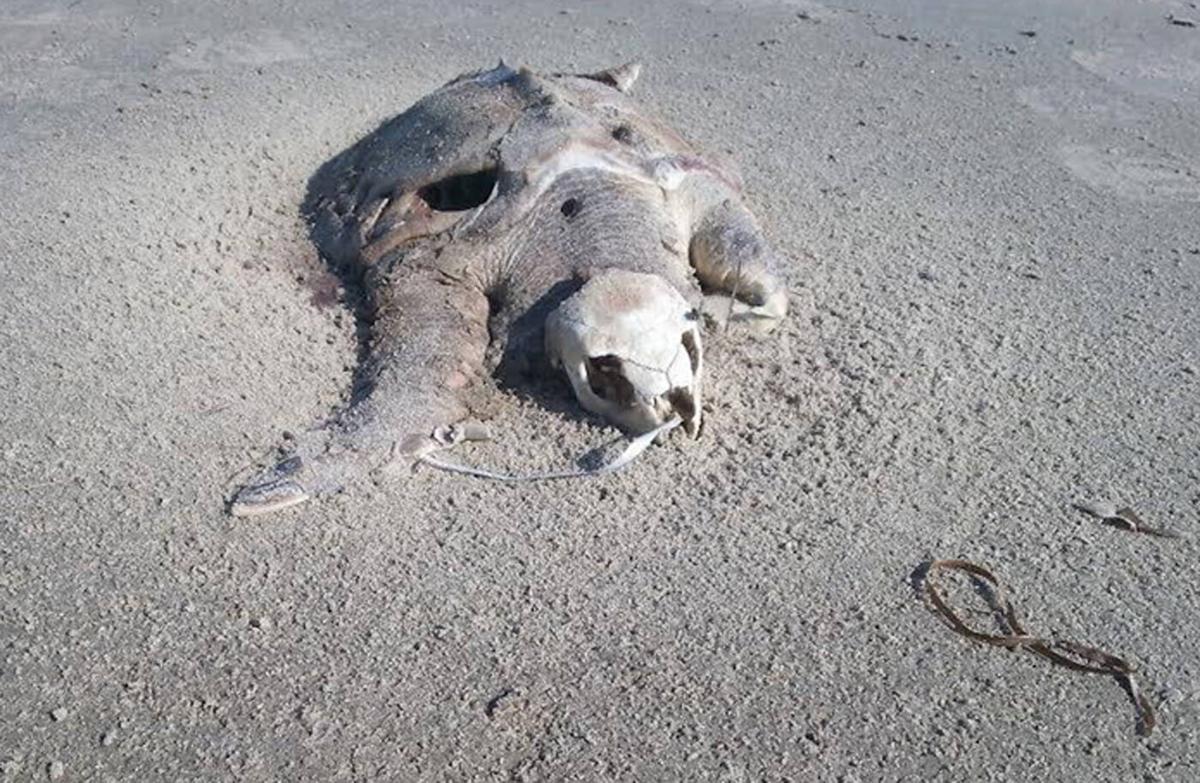 This partially decomposed sea turtle was found washed ashore at Fisherman Island National Wildlife Refuge at the mouth of the Chesapeake Bay. A necropsy on the animal found two latex balloons in its digestive tract. (US Fish & Wildlife Service) 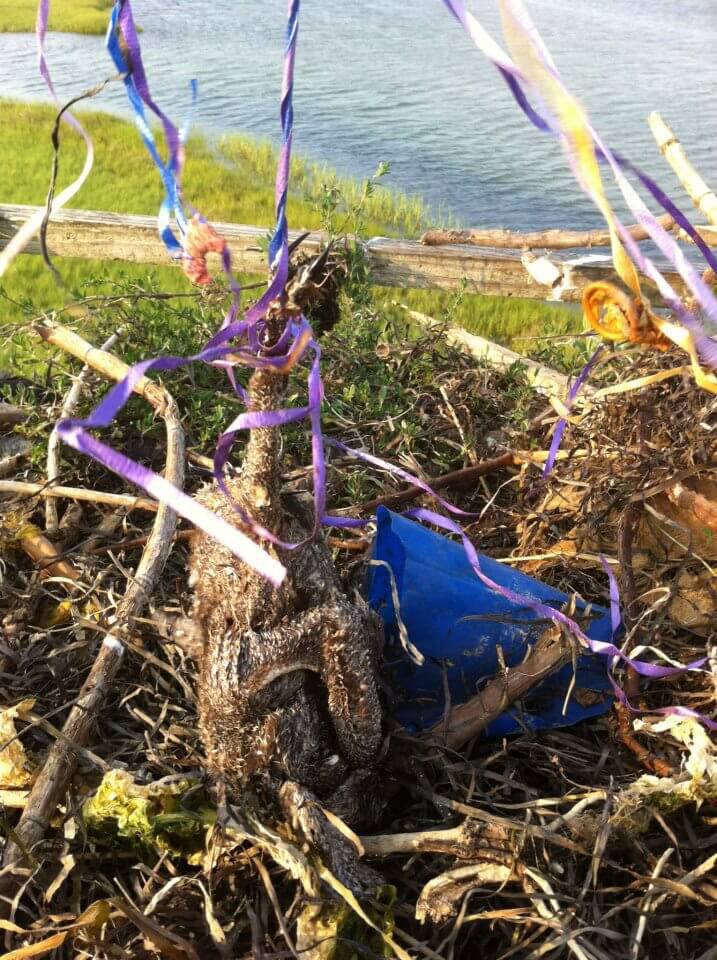 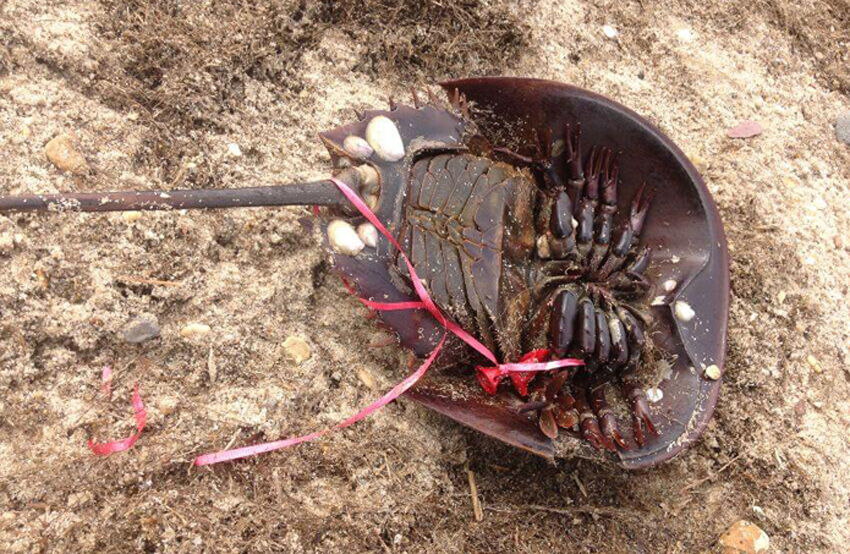 A horseshoe crab, found on the Delaware Bay shoreline with a balloon and ribbon tangled in its legs, was rescued by a passerby. (Doug Bevinson, courtesy of BalloonsBlow.org)

Democrats and Republicans may not agree on much these days, but in the Maryland General Assembly lawmakers of both parties have come together to protect sea turtles, shorebirds and other wildlife.

One of the first bills to be heard during the 90-day legislative session that began Jan. 13 is a bipartisan measure that would impose a statewide ban on intentional releases of helium-filled balloons. A violation would be punishable by a fine of up to $250.

Backers said the legislation, HB391, is needed because what goes up eventually comes down, where it poses a pernicious threat to animals, particularly marine life.

“When a balloon is released, best case, it becomes litter. Oftentimes it’s much worse,” said the bill’s lead sponsor, Del. Wayne Hartman, a Republican representing Wicomico and Worcester counties on the Eastern Shore. “Unfortunately, [balloons] are often confused as food for sea life,” he said, “and the ribbons and so forth attached can cause entanglement.” The outcome for marine life is often fatal, he pointed out.

Helium-filled latex balloons can drift for miles before coming to Earth — or, just as likely, to water. Helium-filled foil balloons (commonly known by the tradename Mylar) remain buoyant much longer and can stay aloft for weeks and drift for hundreds of miles, Hartman explained during a Jan. 15 hearing before the House Environment and Transportation Committee.

A recent survey by the nonprofit group Oceana tallied nearly 1,800 reports nationwide of 40 different species of animal either swallowing or becoming entangled in some type of plastic. Balloons were among the most frequent plastic items involved. Nearly half of the incidents involved sea turtles, and close to 90% of all the affected animals have been either endangered or threatened species, Oceana reported.

In Maryland, Hartman recalled, a “roundup” organized by a family from Berlin collected more than 2,800 balloons in 19 months from the ocean and beaches. One youngster found 20 balloons in a single day on Assateague Island.

The bill — cosponsored by two other Eastern Shore Republicans and four Western Shore Democrats — has drawn enthusiastic support from a bevy of environmental and animal-welfare groups. Similar bills easily passed in the House and Senate last year but failed to get through both chambers before the legislative session shut down weeks early because of the coronavirus pandemic.

Other balloon bans have outlawed intentional releases of multiple balloons, but the Maryland bill applies to the intentional release of even a single one. Releasing more than one multiplies the penalties. There are a handful of exemptions in the Maryland bill, including releases by anyone under 13 years of age or for scientific or educational purposes. The sponsor also agreed to exempt releases by ham radio operators when done as part of their hobby.

Lawmakers in other Bay states have been weighing similar actions. Legislation pending in the Virginia General Assembly, HB2159, would expand that state’s current law outlawing mass releases to apply even to even a single balloon. In the Delaware General Assembly, a bill introduced in the Senate this month, SB24, would impose a penalty of at least $250 and 8 hours of community service for intentionally releasing 5 or more balloons. It would also make even smaller releases subject to littering fines. An online petition has been started urging Pennsylvania lawmakers to take action as well.

Cindy Dillon of the Maryland Sierra Club, testifying in Annapolis in favor of that state’s legislation, noted that balloons are often released to celebrate some happy occasion, such as a wedding or graduation, or as a tribute to a lost loved one. She suggested there are other, less potentially harmful ways to honor those individuals, such as planting a tree or lighting candles, or even drumming.

The latter brought a mild protest from the committee’s chairman, Del. Kumar Barve.

“I love the bill,” the Montgomery County Democrat said, “but I certainly don’t want to encourage people to start drumming.”

Thank you!!!!! This by far is the best news and I have heard in years. They should have been banded balloons years ago. It is litter !!!!! Plant trees sure is a better idea. You can watch them grow instead of seeing pictures of dead animals, all because chose to send trash into the sky.

Just last weekend we saw about a dozen purple balloons released on the beach in Rehoboth, DE. Someone should place ads in bridal magazines encouraging planting a tree or lighting candles - yes, or even drumming.