You are the owner of this article.
Edit Article Add New Article
You have permission to edit this article.
Edit
Welcome, Guest
News
Travel
Columns
Opinion
Multimedia
Bulletin Board
About
Contact Us
e-Edition
Subscribe
Donate

A Maryland judge has dealt a blow to the state’s poultry industry, ordering regulators to impose limits for the first time on air pollution emanating from the sprawling indoor facilities where chickens spend most of their lives.

Montgomery County Circuit Court Judge Sharon Burrell ruled March 11 that the Maryland Department of the Environment must regulate nitrogen released into the air because some of it falls into waters protected by the federal Clean Water Act, such as the nearby Chesapeake Bay.

There, nitrogen in large enough quantities can wreak havoc in aquatic systems, feeding huge algae blooms. When those blooms die off, it can rob the water of oxygen, creating “dead zones.”

Last year, the MDE finalized a revision to the five-year “general discharge permit” governing the facilities, and the EPA accepted the changes. 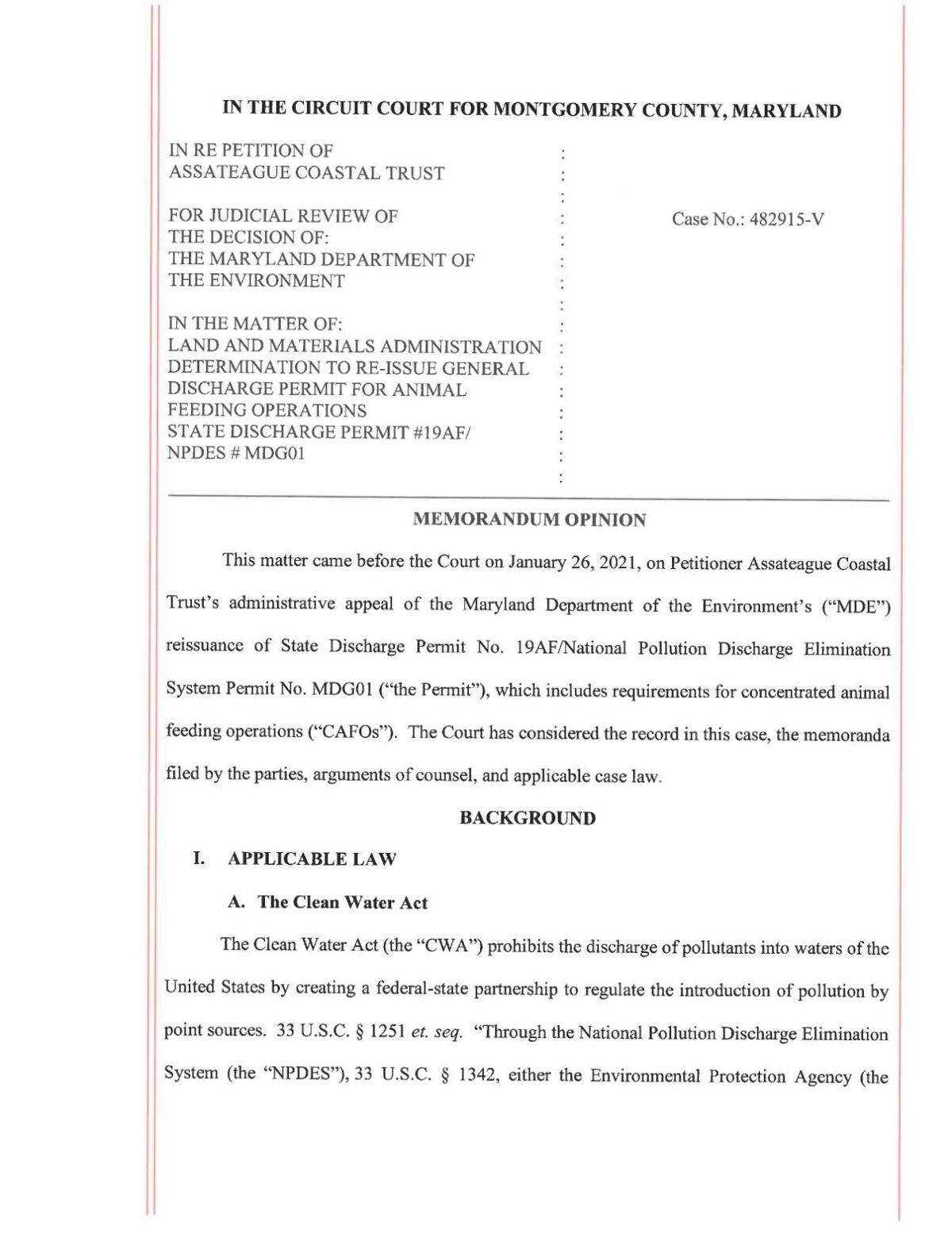 Maryland’s chicken industry is centered on the Eastern Shore, where more than 2,000 chicken houses rise from the flat, rural landscape. Each house is equipped with giant fans that ventilate the gases generated inside. Among them: ammonia, a form of nitrogen.

The Assateague Coastal Trust, an environmental group that has long sought greater scrutiny of the industry, filed the lawsuit last October.

“Today, communities on the Lower Eastern Shore of Maryland can breathe a sigh of relief (literally) knowing Maryland clean water regulations will now better protect the water they drink and the waterways they fish and recreate in,” Kathy Phillips, the trust’s executive director, said in a statement. “This ruling will work to protect watershed communities, including those communities facing environmental injustices, who will see improved water quality and the co-benefit of reduced air pollution.”

MDE officials had argued that forcing the agency to regulate air emissions for the sake of protecting water quality would be onerous for the state as well as for farm operations. Water permit holders — from all industries, not just agriculture — would have to seek new permits or modify existing ones if their facilities vent pollutants into the air, they contended. Air permit holders also might need new approvals if their emissions are found to impact waters.

Burrell’s 14-page ruling counters that, unlike those “theoretical” examples, ammonia emitted by chicken houses constitutes a “specific, calculable event that the MDE is obligated to regulate” under the Clean Water Act powers delegated to the state.

MDE spokesman Jay Apperson said the agency is reviewing the ruling. He defended the state’s oversight of the farms, known as concentrated animal-feeding operations, describing its regulations as some of the most stringent in the country.

“The Maryland program’s effectiveness has been noted by the U.S. Environmental Protection Agency in its reviews,” Apperson said in a statement. “Maryland is also committed to protecting and improving local water quality and restoring the Chesapeake Bay.”

The Delmarva Chicken Association, the region’s trade group, said it expects the MDE to appeal the decision to a higher court. In a statement, executive director Holly Porter accused the Assateague Coastal Trust of deliberately selecting a venue — Montgomery County — that rarely handles agricultural law cases.

"While Maryland farmers work hard to achieve environmental progress, including sustained reductions in nutrients delivered to the Chesapeake Bay, these activists remain determined to put hundreds of farm families out of work by eradicating chicken farming on the Eastern Shore,” Porter said.

David Reed, an attorney with the Chesapeake Legal Alliance, which filed the lawsuit on behalf of the trust, said they picked Montgomery because it tends to hear “science and technology” cases. With the pandemic in full swing, Reeded added, they also wanted a court near where the attorneys lived.

Ammonia emissions are notoriously difficult for scientists to model, but some have tried.

In 2019, researchers at North Carolina State University estimated that 24 million pounds of ammonia fall back onto the Eastern Shore’s land and waters after being emitted by the region’s CAFOs. Judge Burrell cited the Chesapeake Bay Foundation-funded study in her ruling.

“This new ruling,” said the foundation’s vice president, Alison Prost, “clarifies the responsibility of regulators to reduce ammonia emissions to improve water quality in Maryland’s rivers and streams, as well as the Chesapeake Bay.”

Burrell ruled that a pollutant doesn’t have to be in liquid form to be regulated under the state’s Clean Water Act powers. State law in that section defines a pollutant as “any liquid, gaseous, solid or other substance that will pollute any waters of this state,” she pointed out.

Therefore, Burrell wrote, lawmakers showed a “clear intent” to expand the law’s reach within the state beyond its federal confines. As a result, she said, the MDE is required to regulate ammonia “as a water pollutant.”