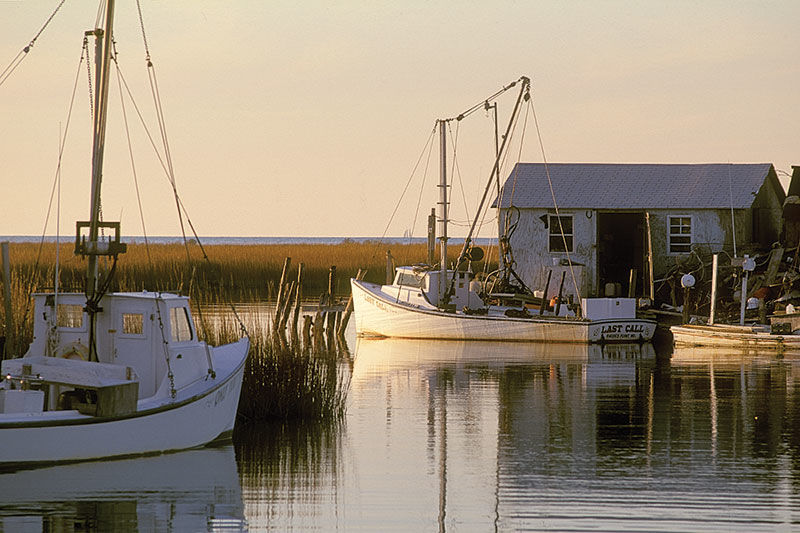 Workboats and crab shanties are a common sight on Smith Island, MD, in the Chesapeake Bay. 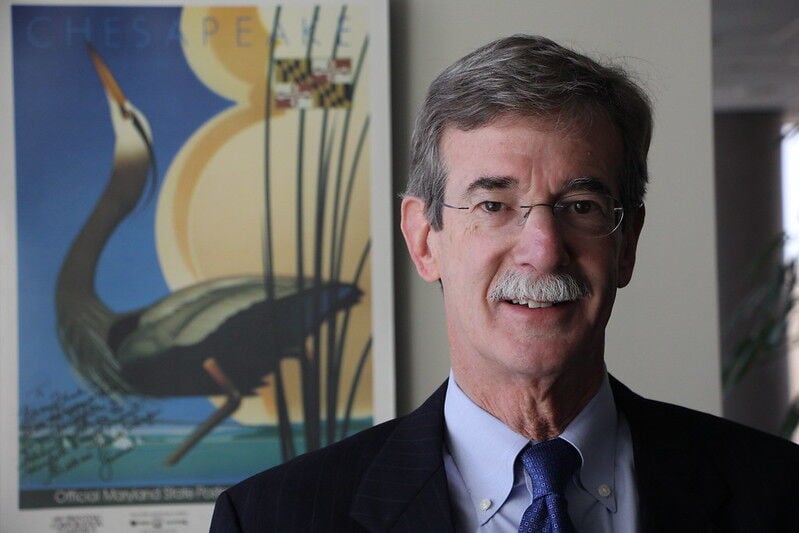 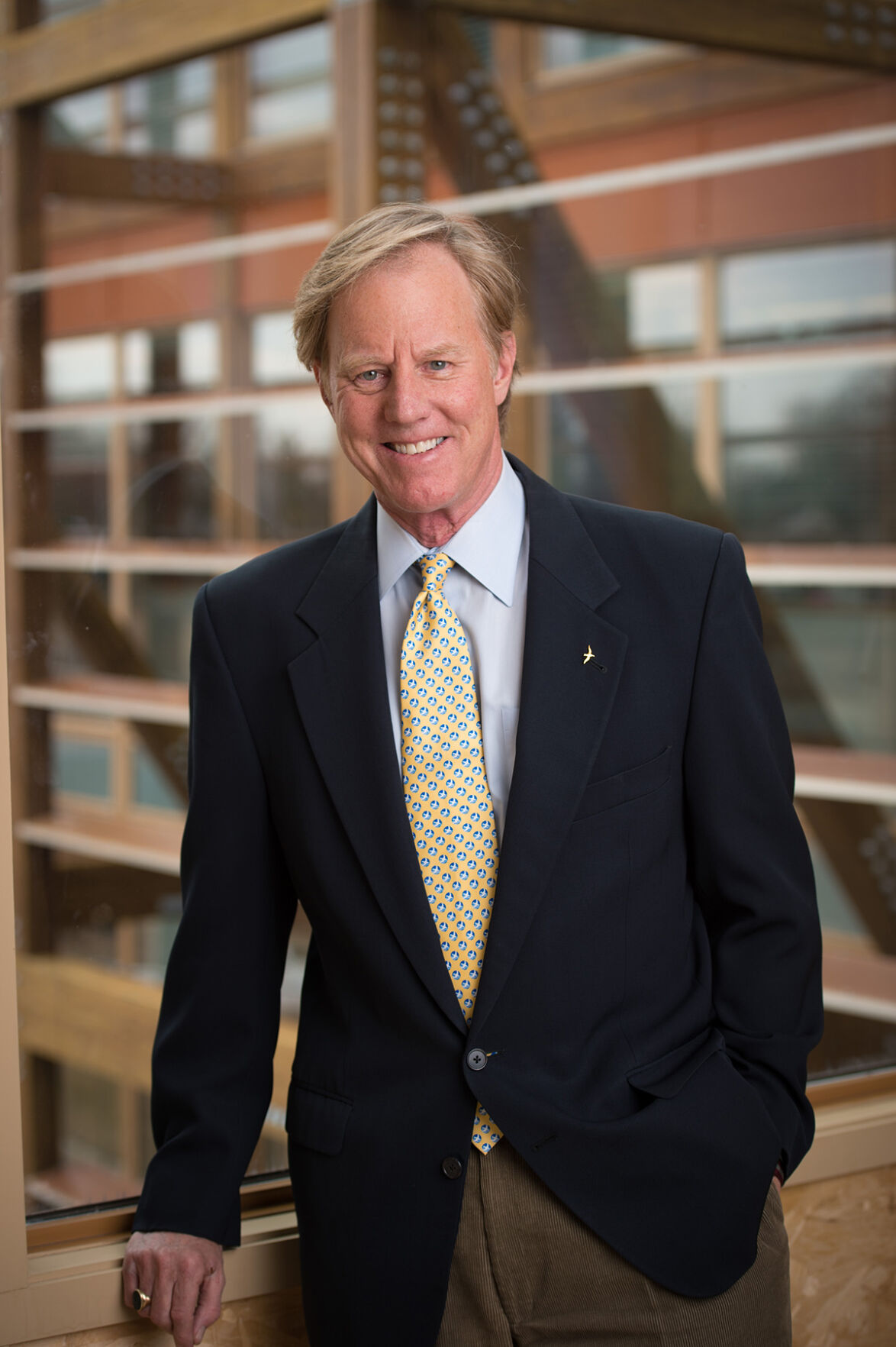 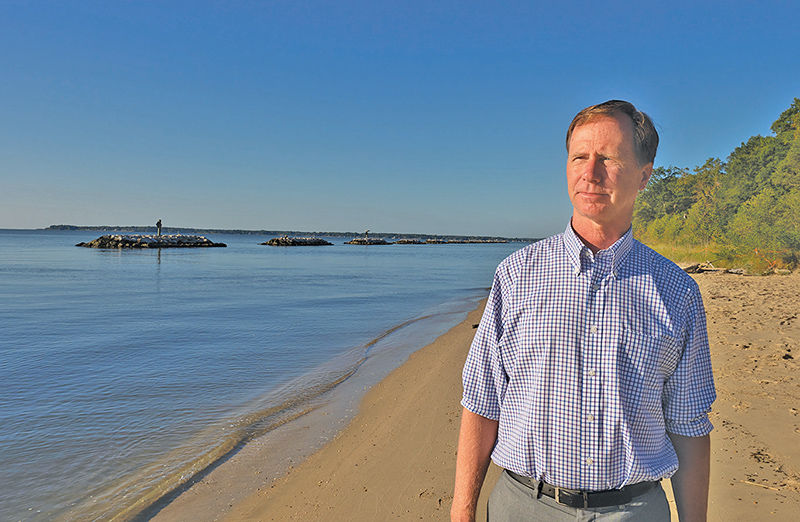 County executive Steuart Pittman of Anne Arundel County, MD, walks one of the shorelines in his jurisdiction that border the Chesapeake Bay. The county has joined the Chesapeake Bay Foundation in its suit against the U.S. Environmental Protection Agency.

Making good on threats issued months ago, three Chesapeake Bay watershed states, the District of Columbia and the Chesapeake Bay Foundation took the U.S. Environmental Protection Agency to court Thursday for its failure to push Pennsylvania and New York to do more to help clean up the Bay.

In their lawsuit, the attorneys general of Maryland, Virginia, Delaware and the District of Columbia accused the EPA of shirking its responsibility under the Clean Water Act by letting Pennsylvania and New York fall short in reducing their nutrient and sediment pollution fouling the Bay.

“This has to be a collective effort,” said Maryland Attorney General Brian Frosh. “Every state in the Chesapeake Bay watershed has to play a part, and EPA under the law has to ensure that happens.”

The Chesapeake Bay Foundation, joined by the Maryland Watermen’s Association, a pair of Virginia farmers and Anne Arundel County, MD, made similar complaints in a separate federal lawsuit. Both were filed in U.S. District Court for the District of Columbia, where they’re likely to be consolidated into a single case.

“The courts must ensure that EPA does its job,’’ Will Baker, the Bay Foundation president, said in an online press conference held with attorneys general from Maryland, Virginia and the District.

At issue is the EPA’s duty to enforce a decade-old plan the agency drew up for restoring the Chesapeake to ecological health. The plan, known as a total maximum daily load, requires each of the Bay watershed states and the District to do what’s needed by 2025 to reduce their share of the nutrient and sediment pollution harming the Bay.

Progress has been made toward restoring the Bay’s water quality, though much more remains to be done.  In particular, Pennsylvania and New York have fallen far behind in meeting their pollution-reduction targets, especially in curbing nutrient runoff from farmland.

All six Bay watershed states and the District were required to submit plans last year spelling out the measures each would take by 2025 to make the needed pollution reductions.

Most of the plans indicate that states will have to increase pollution-reduction efforts to unprecedented levels to reach their cleanup goals. But Pennsylvania’s and New York’s plans don’t even achieve their goals on paper. Pennsylvania’s falls short on curbing nitrogen, the most problematic nutrient, by about 25%, while New York’s was around 33% short. Pennsylvania’s plan also identifies an annual funding gap for cleanup activities of approximately $250 million a year through 2025.

The EPA cited those shortcomings for both states but hasn’t taken any action against them. The lawsuits contend that the federal government is abdicating its legal responsibility by accepting clearly inadequate cleanup plans with no reasonable assurance the two states can achieve their assigned pollution reductions.

Without responding directly to the lawsuits’ core complaint, an EPA spokesman issued a statement defending the agency’s role in the Bay cleanup.

“EPA is fully committed to working with our Bay Program partners to meet the 2025 goals,” the statement said. “We have taken and will continue to take appropriate actions under our Clean Water Act authorities to improve Chesapeake Bay water quality.”

The spokesman noted that in just the past year, the EPA and other federal agencies have supplied “nearly a half billion dollars” to support Bay watershed restoration efforts. The agency also has provided “thousands of hours” of technical assistance to the states, it said.

Those filing the lawsuits say that’s not enough. Unless the federal government holds the states accountable for doing their part to reduce nutrient and sediment pollution, the 37-year effort to restore the Bay’s water quality is likely to fail, they warn.

“When EPA uses its bully pulpit to tell a state that they’re failing to meet their obligations, action follows,” said the foundation’s Baker. “We’ve seen that with Pennsylvania in the past.”

The agency briefly withheld about $3 million in federal funds from Pennsylvania five years ago to prod it to come up with a plan for getting its cleanup back on track.  Critics suggest the EPA also could leverage state compliance by threatening to block permits that are needed to build or expand businesses.

Environmentalists and Maryland officials have been complaining for some time that the EPA is not doing more to press Pennsylvania over its lagging cleanup pace. But discontent ramped up in January when Dana Aunkst, director of the EPA’s Chesapeake Bay Program office, described the 2025 cleanup deadline as “aspirational” and said the Bay TMDL was “not an enforceable document.”

The litigants said they didn’t relish taking the EPA to court but felt they had no choice. They faulted the Trump administration, contending it had not only abandoned the federal government’s  role as enforcer of the Bay TMDL, but had threatened the cleanup further by rolling back or weakening federal environmental regulations.

The Annapolis-based environmental group and the attorneys general had served the EPA formal notice in May of their intent to sue and followed up later with a letter offering to meet and discuss their concerns. The EPA did not respond, they said.

“We’re here to enforce the agreements,” said Karl Racine, the District’s attorney general. “It’s not unusual at all that when parties don’t do what they’re supposed to do by law, we go to court to have it enforce the remedy.”

Neither Pennsylvania nor New York are defendants in the lawsuits, though their alleged shortcomings are key issues. Deborah Klenotic, spokeswoman for the Pennsylvania Department of Environmental Protection, declined to comment on the litigation, saying, “We remain focused on our work to improve water quality here in Pennsylvania and in the Chesapeake Bay.”

But Maureen Wren, a spokeswoman for the New York Department of Environmental Conservation, disputed assertions the state isn’t doing its part to help clean up the Bay.

“New York is fulfilling its clean water responsibilities under the Chesapeake Bay TMDL and is a committed partner” in the federal-state Chesapeake Bay Program, she said.

Maryland’s Anne Arundel County, which has more than 500 miles of shoreline on the Bay and its tributaries, joined the foundation in its lawsuit.

“Anne Arundel County residents have invested far too much in the Chesapeake Bay restoration effort to watch from the sidelines as upstream states and the EPA abandon their obligations,” said Anne Arundel County Executive Steuart Pittman.  The county has spent more than $500 million in the last decade on Bay protection and restoration, officials estimate.

The Maryland Watermen’s Association, which has been at odds with the Bay Foundation over the state’s management of oysters, also joined in the group’s lawsuit. Observing that “water runs downhill,” Robert T. Brown, Sr., the group’s president, said the nutrients, sediment and debris coming down the Susquehanna River from Pennsylvania and New York are having a devastating effect on watermen.

“So goes the health of the Bay, so goes [our] industry and seafood,” he said. “…We need to have the EPA do its job.”

Also suing are Robert Whitescarver and Jeanne Hoffman, who raise livestock on a farm in Virginia's Shenandoah Valley. Whitescarver, a former Natural Resources Conservation Service representative, has long advocated for farm conservation practices. He said farmers have a stake in this issue.

"All jurisdictions need to do their fair share," he said. "The efforts t at Virginia and Maryland farmers have put into sustainable farming are harmed by EPA’s failure to require all jurisdictions to meet the commitments they agreed to.”

At least a couple of the states suing the EPA to put the heat on Pennsylvania and New York could find themselves on the receiving end of similar pressure if their lawsuit succeeds. Only the District of Columbia and West Virginia have met their 2025 goals ahead of schedule, according to recent data. None of the others are on track to reduce nitrogen by the needed amount.

“If any of the Bay states fall significantly short in implementation, CBF will call on EPA to take action,” Baker said.