You are the owner of this article.
Edit Article Add New Article
You have permission to edit this article.
Edit
Welcome, Guest
News
Travel
Columns
Opinion
Multimedia
Bulletin Board
About
Contact Us
e-Edition
Subscribe
Donate
1 of 6 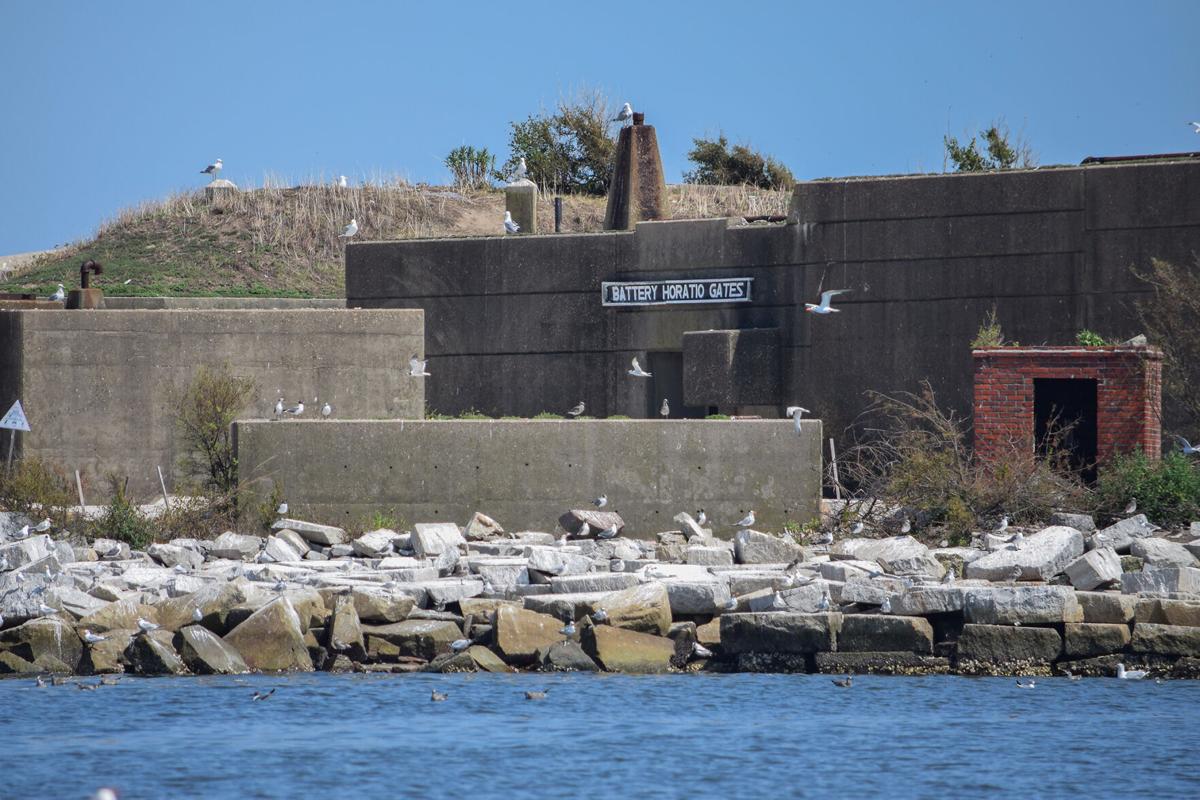 Migratory seabirds flocked to Fort Wool in the middle of the Hampton Roads waterway in Virginia this spring after they were displaced from their previous island home of nearly 40 years. 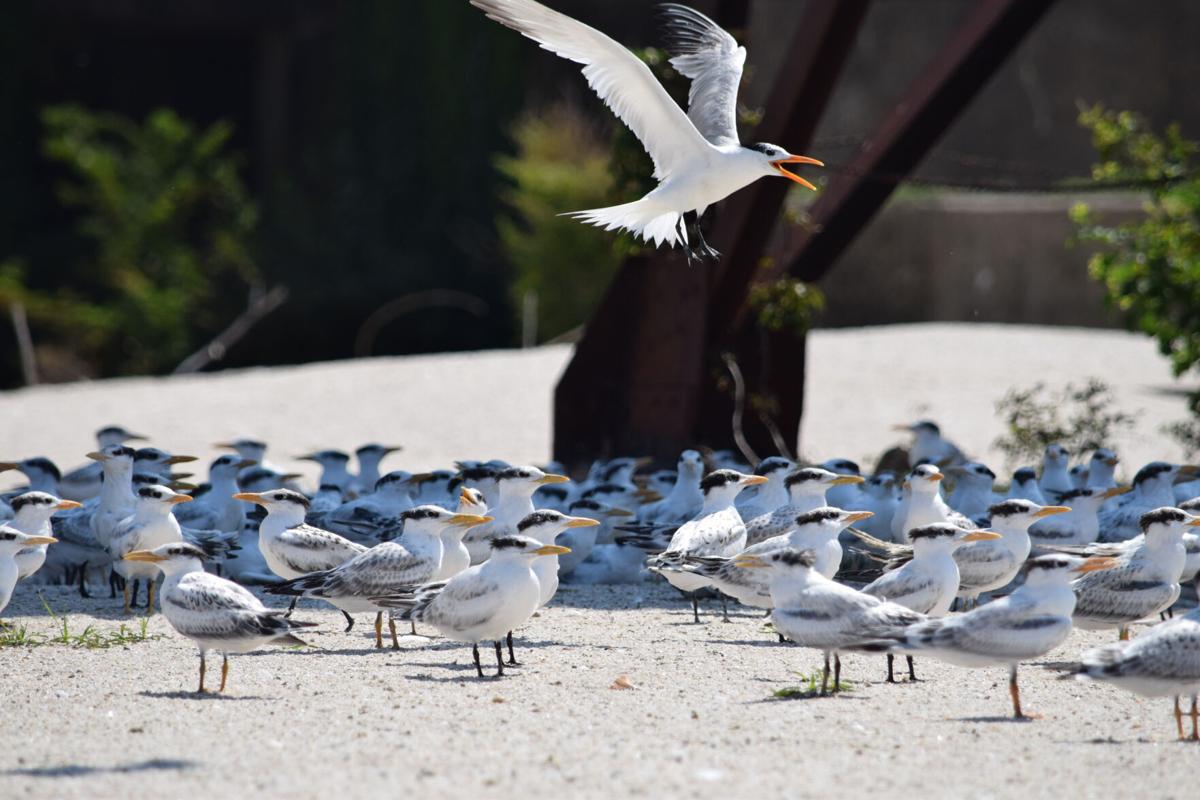 Terns gather on Fort Wool in Virginia, where the site was hastily and successfully prepped to entice nesting migratory birds. 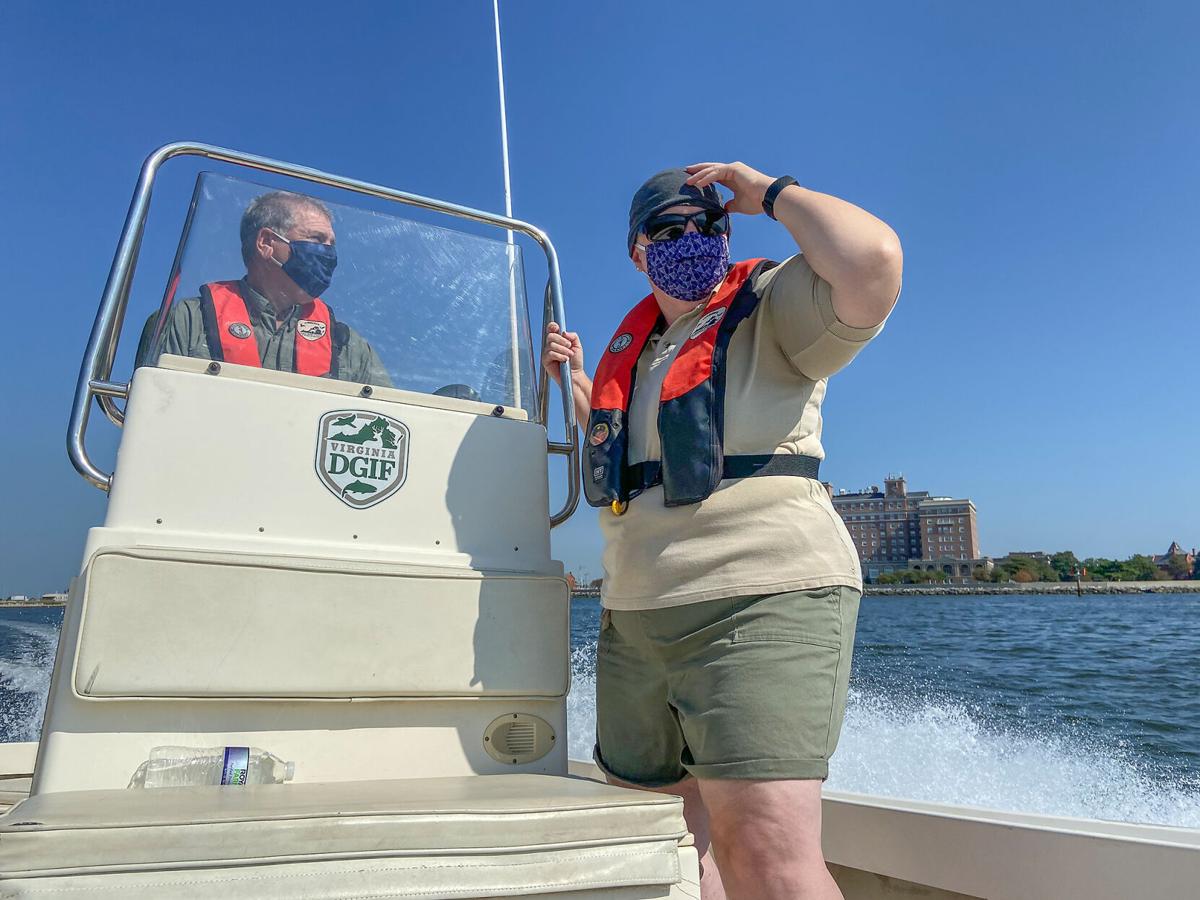 David Norris and Becky Gwynn of the Virginia Department of Wildlife Resources take a boat to view the migratory bird nesting colony at Fort Wool. 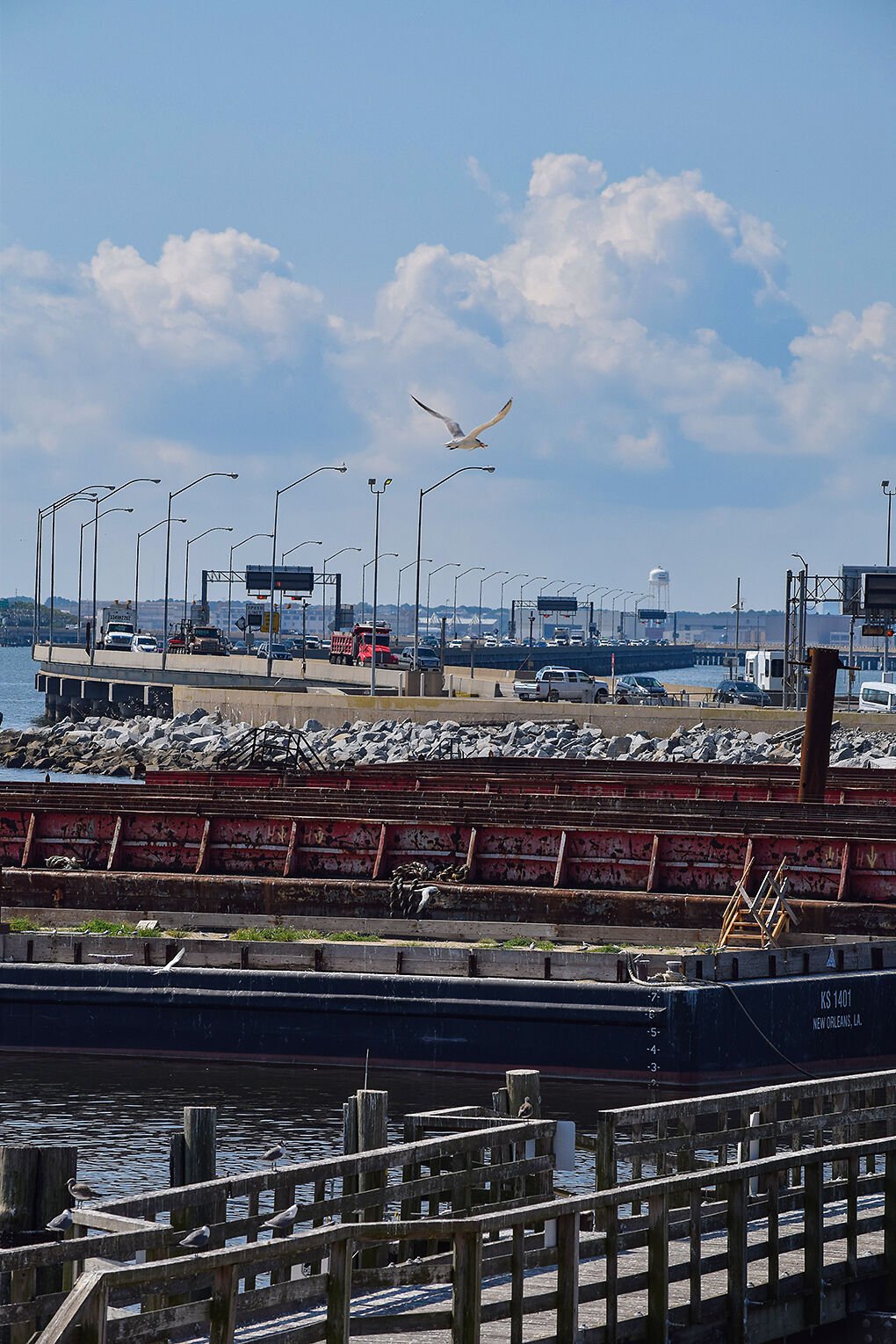 A common tern flies above barges that were anchored in the middle of the Hampton Roads waterway in Virginia to provide a temporary home for migratory birds. In the background, traffic winds it way northbound on the Hampton Roads Bridge Tunnel away from Norfolk. 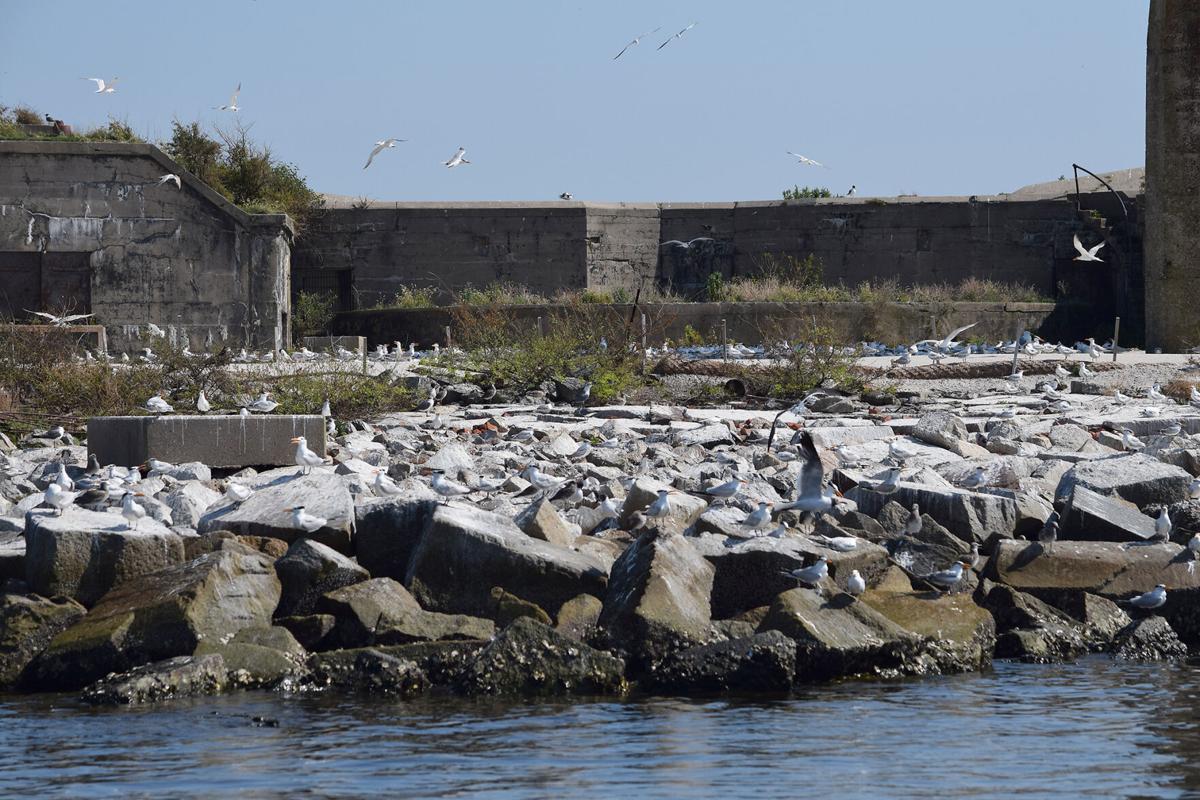 Built shortly after the War of 1812, Fort Wool in Virginia has long been closed as a military site. Now, it’s home to the largest nesting migratory bird colony in the state. 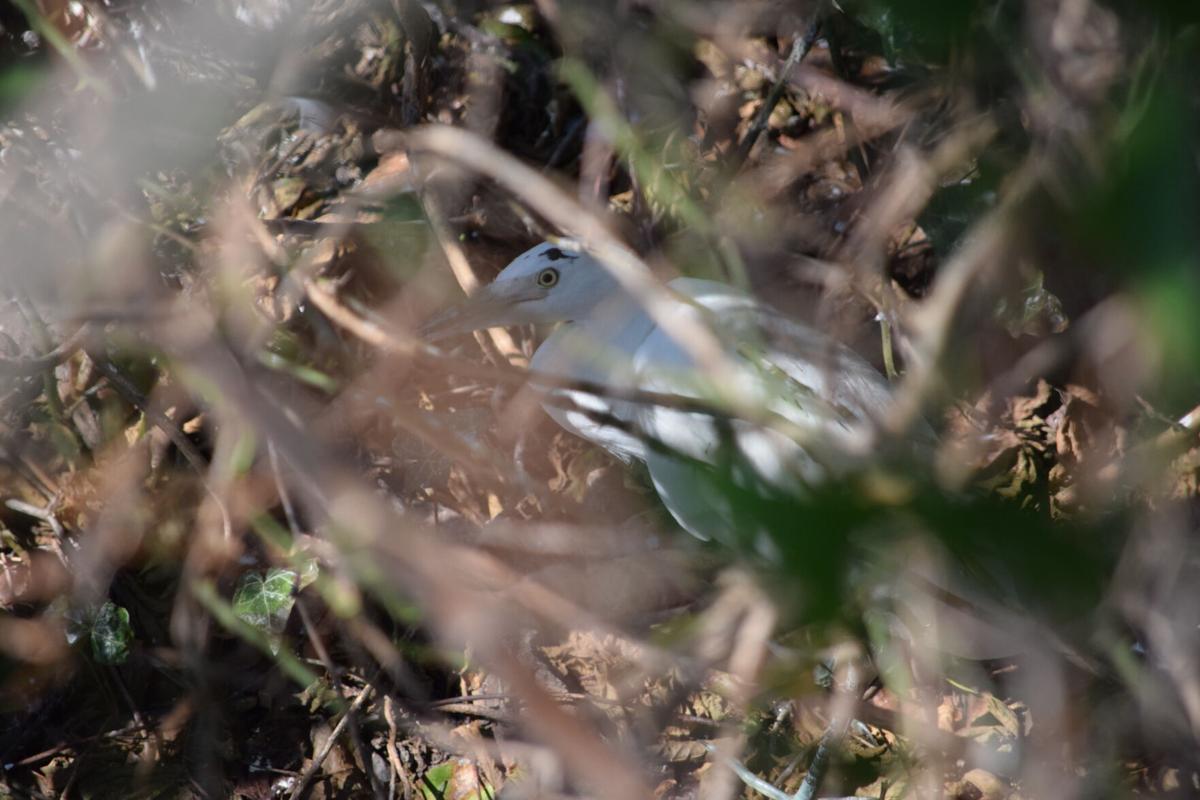 A snowy egret peeks out from its nest on Fort Wool, VA, in one of the few trees remaining on the island after state biologists had most of it cleared to make way for migratory bird nesting earlier this year. 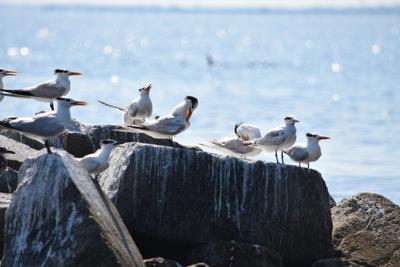 Facing a tight deadline and a global pandemic, state biologists swooped in to preserve Virginia’s largest colony of nesting seabirds.

They hauled in tons of white sand. They removed trees and brush that would have prevented the birds from keeping their customary 360-degree lookout. They played bird calls on a continuous loop. They put out decoys. And they waited.

But not for long. Within days, their office computer screens lit up with videos of royal terns displaying courtship behavior in the middle of the fresh blanket of sand. By July, the renovated island near the mouth of the Chesapeake Bay was teeming with flapping wings, eggs and newly hatched chicks.

“This is fantastic,” said Becky Gwynn, a biologist with the Department of Wildlife Resources, as she looked out on the squawking masses during a recent visit. “We knew our timing was close when we received our marching orders from the governor’s office on Valentine’s Day.”

Gov. Ralph Northam’s administration stepped in to save the colony earlier this year after the U.S. Fish and Wildlife Service, citing a new in-house legal opinion, waived off protections that would have required the state to act. For conservationists, the upward trajectory of the birds displaced by a new highway tunnel demonstrates the ecological benefits of the federal environmental law that the Trump administration tried to circumvent.

“It’s just great to have an opportunity to say ‘well done,’” said Mike Parr, president of the American Bird Conservancy. “It looks like it worked as well as we could have hoped. Given all the COVID-19 challenges, the logistics and permitting, they did an amazing job with this.”

Since the 1980s, a colony of more than 25,000 birds had nested on South Island, an artificial island constructed in 1957 in the middle of Hampton Roads near the mouth of the James River. The island is perched at the spot where the Hampton Roads Bridge Tunnel, part of Interstate 64, begins its descent beneath the waterway. Each day, thousands of cars and trucks stream across the span, a vital transportation link between Norfolk and Hampton.

As unlikely as the island seemed as a nesting spot, it had its advantages, biologists say. The surrounding waters offered a seemingly boundless supply of fish for feeding. Its swatches of sand and gravel were ideally suited for the birds’ ground-level nests. Encircled by water, the land was free from raccoons, foxes and other potential predators.

From April through August, the birds would arrive, make nests, raise young and leave. None of the South Island species were listed as federally endangered or threatened, though the rarest of its inhabitants, the gull-billed tern, is considered threatened at the state level. Because the colony’s denizens are classified as migratory birds, they are protected by one of the nation’s oldest environmental laws: the Migratory Bird Treaty Act of 1918.

That last fact put the colony at the center of a nationwide environmental debate.

To ease traffic congestion, the Virginia Department of Transportation for several years has been planning to widen the I-64 bridge and dig a third tunnel beneath Hampton Roads. As part of the $4 billion project, the state would have to plow under the colony’s nesting grounds at South Island. Under the migratory bird law, the state couldn’t do that without federal approval of a plan to compensate for that ecological loss.

By the summer of 2017, VDOT engineers were engaged in lengthy talks with state and federal biologists about constructing a new home for the birds somewhere in the vicinity.

But in December of that year, the Interior Department’s top lawyer issued a legal opinion decriminalizing unintentional killings of migratory birds. To run afoul of federal enforcement, any future action that led to the death of birds would have to be proven intentional. Accidental bird kills, including those like the colossal BP oil spill in 2010 that led to 1 million avian deaths in the Gulf of Mexico, would no longer carry federal penalties.

The new interpretation represented a sharp reversal from how the law had been enforced for decades under Republican and Democratic leadership alike.

In 2018, the U.S. Fish and Wildlife Service notified VDOT officials that any “continued conservation efforts” for migratory birds on their part would be “purely voluntary.” The state’s conservation work screeched to a halt.

A New York Times report in December 2019 detailed how the administration’s hands-off approach had all but ended migratory bird protection across the country. Its star example was the Hampton Roads colony.

In February this year — Valentine’s Day, to be exact — Northam, facing pressure from conservation groups, announced a $2.2 million plan to temporarily relocate the birds to a spit of land adjacent to South Island. In the longer term, the state would work with the U.S. Army Corps of Engineers to study the idea of creating an artificial island for the birds.

South Island had been paved over already, and nesting season was less than two months away. Gwynn and her colleagues had to scramble.

A stony jetty connects South Island to a smaller, sibling island. It is called Fort Wool after the former Army post that has stood there since 1819. The state gained ownership of the island in the 1970s and has allowed the military citadel to crumble into weedy disrepair.

The first and most obvious problem with the site is that it’s significantly smaller than the 10-acre South Island. So, the Department of Wildlife Resources, until recently known as the Department of Game and Inland Fisheries, had to anchor seven barges just offshore and cover them with tons of sand. That raised the amount of nesting space to about 2.5 acres, Gwynn said.

For all of the steps that biologists took to make Fort Wool attractive to birds — playing the bird calls, spreading the sand and more — they took just as many to discourage their use of South Island.

In addition to paving its surfaces, they hired a contractor to unleash border collies to chase the birds away. “They almost look like they’re playing,” said Rob Cary, chief deputy commissioner of VDOT, “but they’re seen by birds as a predator.”

VDOT also wrapped wiring around railings to discourage the birds from perching. Netting now covers the lower half of the tunnel maintenance and operations complex on the island.

“At Fort Wool, that’s where we have the romantic music and candlelight,” Cary said.

Would it work? No one was sure. New artificial islands have been successful at attracting bird colonies — think Poplar Island in Maryland. But a retrofit on such a short turnaround time was something new.

During Gwynn’s outing with fellow biologist David Norris in early August, several groupings arranged by species – “They like to be amongst their own kind,” Gwynn explained — fluttered and skittered around their makeshift home. But she estimated that the colony’s size had shrunk by about 80% from its height a month earlier, a sign that the annual southward migration was well on its way.

Gwynn’s team, supplemented by researchers from Virginia Tech, monitored the birds throughout the nesting season. Because of pandemic restrictions, they depended on wildlife cameras at times to keep tabs on the birds.

During a rare in-person count, they recorded 3,500 royal tern chicks. Historically, South Island has been home to about 80% of royal tern nesting in Virginia, officials say.

The visitors also include 200 sandwich terns, 1,000 common terns, 150 black skimmers and thousands of laughing gulls. Only one pair of gull-billed terns was documented on the island, but fishermen and other observers spotted more in the air, Gwynn said. And the nesting pair produced two fledglings — chicks that survived to take flight.

The birds have thrived despite the occasional setback, she said. Despite the ubiquitous “No Trespassing” signs, her team has spotted evidence of people walking onto the island and barges. The state installed a ring of tethered buoys to ward off boaters. The birds quickly began using them as nesting spots.

The I-64 construction is scheduled to be completed in 2025. The state plans to continue deploying Fort Wool as a bird sanctuary until a new artificial island is built somewhere within about 6 miles of the current nesting location. That will require at least three years of planning and one year of construction, Norris said.

Meanwhile, a federal judge in New York struck down the Trump administration’s interpretation of the migratory bird law Aug. 11, arguing that nothing in the original text precludes the government from treating intentional and unintentional kills equally.

“It is not only a sin to kill a mockingbird, it is also a crime,” U.S. District Judge Valerie Caproni wrote in her ruling, alluding to Harper Lee's novel To Kill a Mockingbird. “That has been the letter of the law for the past century."

What a fantastic success, despite the Trump administration! Thank you David Norris and Becky Gwynn for caring and your hard work - special thanks to U.S. District Judge Valerie Caproni for her ruling. It is great when we can repair at least a tiny bit of the damage done to these beautiful "beach birds".