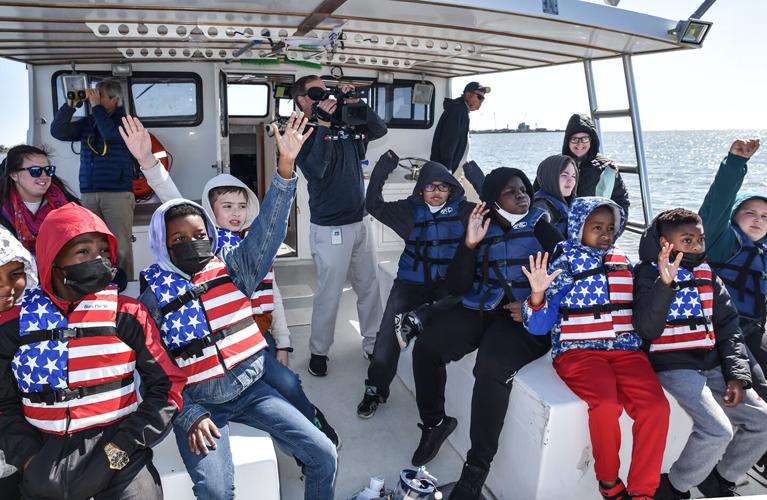 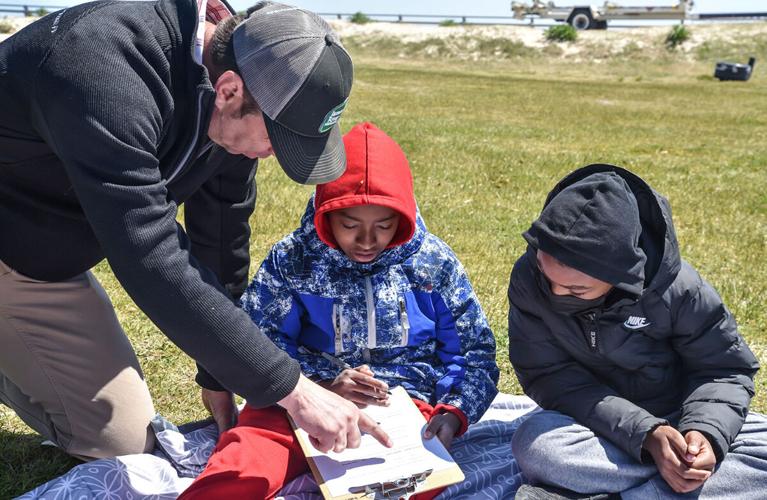 Nat Draper, a former teacher who is now the director of education for the James River Association, helps students make observations during an outdoor education program in April 2022. (Hampton City Schools, VA) 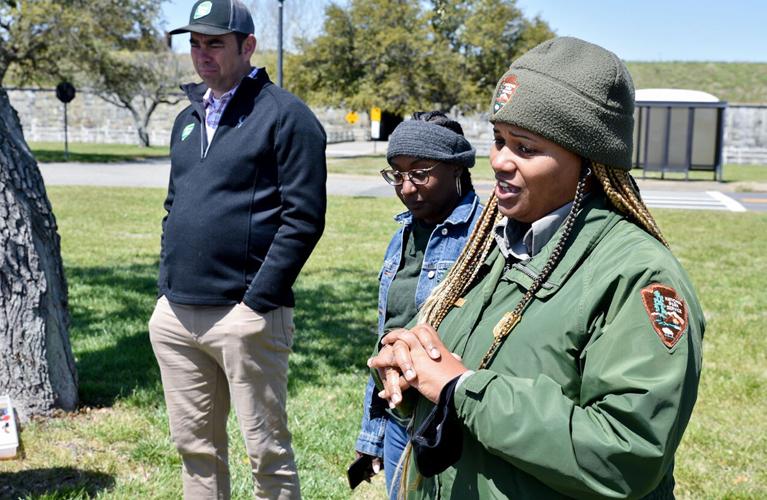 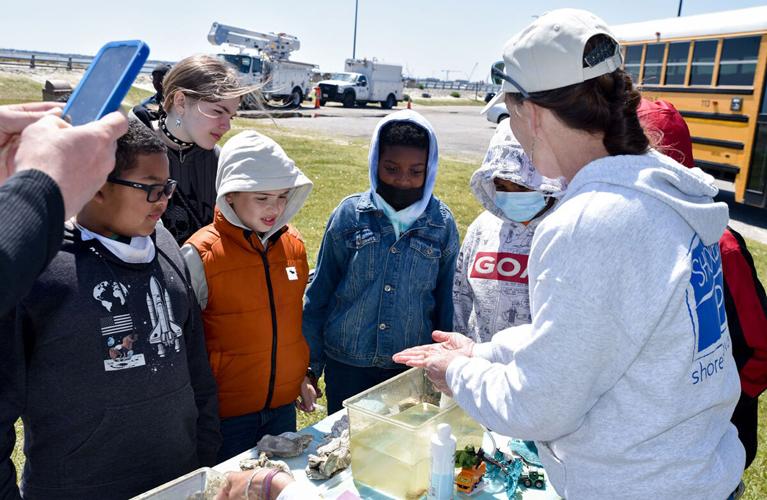 Students from Hampton City, VA, learn about the environmental benefits of oysters and the role of the shellfish in local culture. (Hampton City Schools, VA)

Students attending Hampton City Schools in Virginia live on a peninsula bounded by the James and York rivers that juts into the Chesapeake Bay. Yet “some of our students had never left their neighborhoods, let alone been on a boat,” said Janice Richison, science curriculum leader for the school district.

A collaboration between the school district, the James River Association and the National Park Service’s Chesapeake office during the 2021–22 school year aimed to change that.

Staff from the organizations worked with 21 elementary schools to engage every fifth-grade student in the district — 1,600 in all — in a “meaningful watershed educational experience,” a nationally recognized framework for environmental learning. The program not only took students outside but helped them experience water-quality science firsthand. It also introduced them to historical landmarks and generated conversations about personal connections to the place they call home.

The effort recently garnered an award from the U.S. National Park Service for overcoming COVID-era hurdles and introducing students to environmental and historical resources in their community.

The process began with teacher trainings and interactive virtual lessons introducing staff and students to concepts they would engage with during an upcoming field trip.

During boat trips on the James and Hampton rivers, the students donned masks for safety and used scientific tools to measure salinity and turbidity. They saw what a net thrown into local waters brings in — from blue crabs to pufferfish.

“That’s the hands-on stuff,” said Nat Draper, a former teacher who is now the director of education for the James River Association. “You know how peer pressure is: As soon as one student touches it, others say, ‘Oh, I want to touch it now.’” (But the pufferfish, some species of which are venomous to handle, remained untouched.)

The boat trips took place on the Longview, the James River group’s 50-foot deadrise vessel, retrofitted to accommodate educational trips. Each of the nearly 45 trips taking place in the fall and spring included 40–50 students. Half of the students went on the boat while the other half did land-based activities, then the groups switched, Draper said.

The field days also included a visit to nearby Fort Monroe National Monument, the largest stone fort built in the United States.

Interpreted now by the National Park Service, Fort Monroe also commemorates the arrival there of the first enslaved Africans in Virginia in 1619. The Hampton schools program used this historic backdrop to discuss with students, many of them with African American heritage, the cruelty and complexities of human enslavement.

They also discussed how the enslaved Africans contributed to the developing nation with skills learned in their homeland.

The program’s efforts to uplift stories of African Americans in the Chesapeake region was one of the aspects that set it apart. Brittany Hall, an education coordinator with the NPS Chesapeake office who helped shape the program, said she hopes it will inspire others.

“I think what made this [project] award-winning was that we included both the history and the science together,” Hall said. “These stories are part of Hampton’s culture. And we’re saying, ‘You guys are part of this heritage.’”

Hall brought her passion for African American history to her work at the Park Service. Connecting that with the natural environment has helped her see how students in particular can make a difference for their communities in the future.

Lessons on oysters helped connect the dots between the environmental lessons and the cultural ones. During their sessions on the landscape, the students learned that oysters help filter and clean water while they are growing, and that African Americans played a key role in that local industry.

“So, when kids walk down Shellfish Row [seafood market] they can now say, ‘Oh, that relates to the oyster shells we learned about,’” Richison said. The lessons “took it to a different level, where our kids now are made aware of their surroundings and how it impacts our environment.”

Students in the program also painted pictures of fish and other local species onto the concrete covers of stormwater drains. These art projects remind passersby that the water running off the streets is headed to a local waterway and to the Bay.

The National Park Foundation funded the first year of the program, and it continues during this school year with funding from the NPS Chesapeake Gateways Network.

“How we expose our children determines the path they create,” Richison said. “There are careers on the water and in science that our children wouldn’t otherwise know about.”