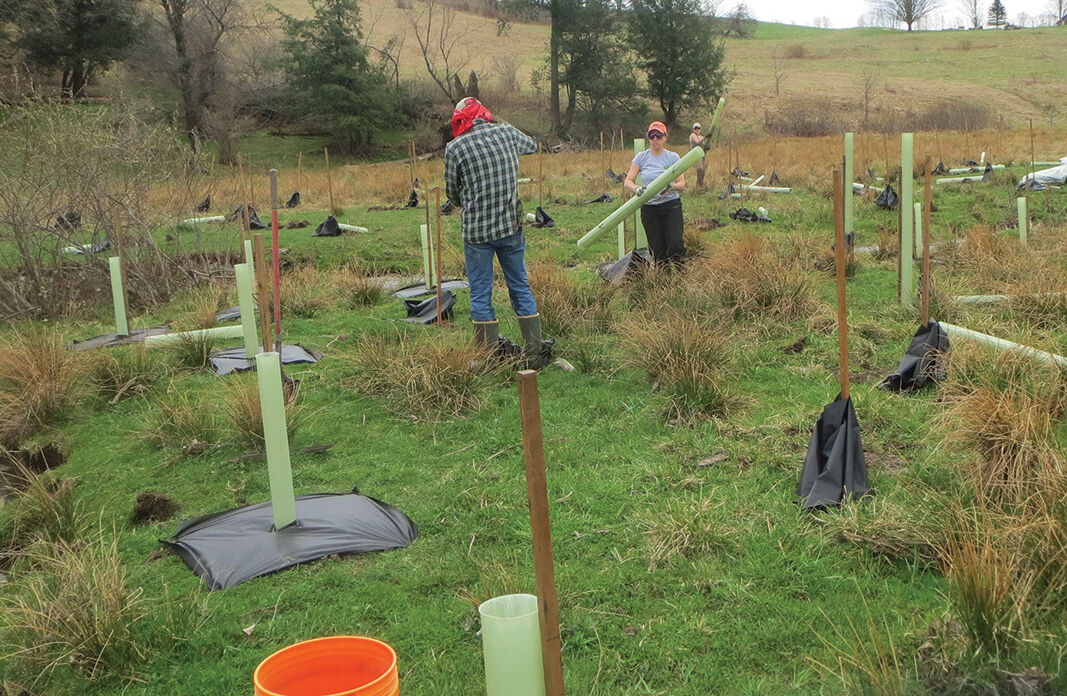 The Upper Susquehanna Coalition has partnered with soil and water conservation districts in New York and Pennsylvania to plant thousands of trees along ditches and streams on private properties like this one in Madison County, NY. (Troy Bishopp) 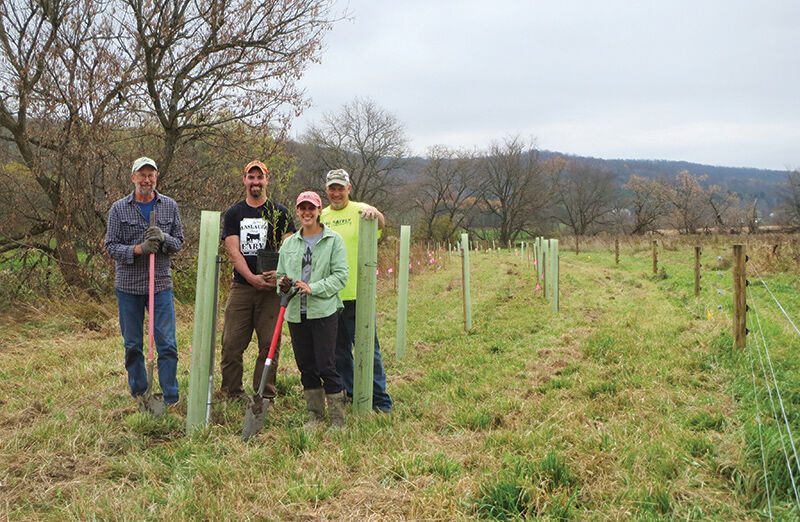 Buffer plantings like this one in Madison County, NY, help filter stormwater and prevent erosion along stream banks. (Troy Bishopp)

Planting a tree can be its own reward. But one Chesapeake Bay watershed organization transformed the simple act into one of the most prestigious environmental awards in the nation.

The Arbor Day Foundation in April named the Upper Susquehanna Coalition one of five recipients of its 2020 Arbor Day Awards, which honor organizations and individuals for tree planting and environmental stewardship.

The foundation applauded the New York-based coalition for planting more than 10,000 native trees in northern Pennsylvania and southern New York in 2018 alone. The organization also involved more than 100 student volunteers in its efforts while educating more than 1,500 people about the role that trees play in improving water quality that year.

The coalition has created a “sustainable, replicable and measurable program which engages a diverse group of partners and community members,” said Jen Hallaman, an Arbor Day Foundation spokeswoman. “The Upper Susquehanna Coalition has most certainly demonstrated leadership in this field.”

Kathleen Peters can see some of fruits of the coalition’s labors in her backyard. When Peters, a graphic artist, and her husband, a retired New Jersey state school official, moved to a 22-acre property in rural New York, the creek in their backyard was surrounded by goldenrod and vines.

Peters worked with the Otsego Land Trust to protect the creek and its shoreline under a conservation easement. Then, the couple decided to go a step further, partnering with the Upper Susquehanna Coalition to plant about 300 trees and shrubs along the waterway, known as Herkimer Creek.

At first, there wasn’t much to look at except for the white tubes that protected the saplings from the teeth of deer and groundhogs. “But now that the trees are starting to come up above the tree tubes, it’s starting to look like the pretty thing that we wanted from the beginning,” Peters said.

Trees planted along stream and ditch banks serve many purposes, said Lydia Brinkley, the coalition’s buffer coordinator. The right greenery slows the flow of stormwater, catching sediment and nutrients before they wash downstream. Reducing such pollution is at the heart of the state-federal Chesapeake Bay Program.

“Nutrient and sediment reduction is the reason we’re paid to do it,” said Brinkley, noting that much of their funding comes from the New York Department of Environmental Conservation’s “Trees for Tribs” program.

The group also aims to stabilize streambanks and provide habitat for native wildlife, she added. Trees shade the water, keeping it cool enough to support certain coldwater aquatic species, such as brook trout and the hellbender salamander.

Across the Bay watershed, though, the pace of planting continues to fall short of the Bay Program’s goal of creating 900 miles of stream buffers per year. Since 2010, when the current restoration program was launched, the length of plantings has averaged about 30% of that total each year, officials estimate. The U.S. Environmental Protection Agency and the six participating states have set a 2025 deadline for putting in place the program’s pollution-reducing actions.

The Upper Susquehanna Coalition was created in 1992 to help extend the reach of soil and water conservation districts in the 7,500-square-mile region straddling the New York-Pennsylvania border. The coalition consists of 21 districts – 17 in New York and four in Pennsylvania. The area forms the headwaters of the Susquehanna River, the Chesapeake Bay’s largest tributary.

The forest buffer program sprouted in 2015, and Brinkley was named its first director. Its clients are mostly large landowners, such as farmers. But planting trees isn’t always an easy sell.

“The hardest part is the mindset that trees are not as valuable as a crop,” said Troy Bishopp, who works with both the Madison County, NY, district and the coalition to persuade farmers to be better land stewards. “We’re basically in the salesman business.”

Normally, conversations begin with farmers seeking a district’s help with improving the health of pastureland or fencing livestock out of streams. For Brinkley, those are cues to start her pitch.

“Nobody’s really contacting the district for planting more trees, but it always ends with it,” she said.

What they plant depends on local conditions, but some tried-and-true varieties include sycamore, red maple, river birch and swamp white oak.  The coalition’s 2019 records show it planted 26 tree species and 14 types of woody shrubs.

The work doesn’t stop with the last shovel of dirt. The group is in its third year of a stewardship program in which it dispatches interns to inventory the trees that have been planted and to take actions, when necessary, to shore up their survival, such as standing up tree tubes and removing encroaching vegetation.

The Arbor Day Foundation has been recognizing groups like the Upper Susquehanna Coalition through the Arbor Day Awards since 1972. The group won in the “headwaters” category. This year’s other recipients were Larry Biles of the Kansas State Forest Service, Gabriela E. Lopez of Million Trees Miami, the city of Toronto and Bank of America.

In 2018, the foundation presented another organization in the Chesapeake region with the headwaters award. The Cacapon Institute of West Virginia, which helps to protect water quality in the Potomac River watershed, was recognized for forestry programs that include tree planting, education and stewardship.

Peters said her patch of trees has been fortified with additional plantings to make up for losses caused by hungry animals. The tallest specimens now stand at about 8 feet. She hopes that as they grow, they keep the banks from eroding and preserve her bucolic view.

“My tax dollars going to an actual benefit,” she said with a laugh. “It’s a good feeling that there are programs like this out there.”