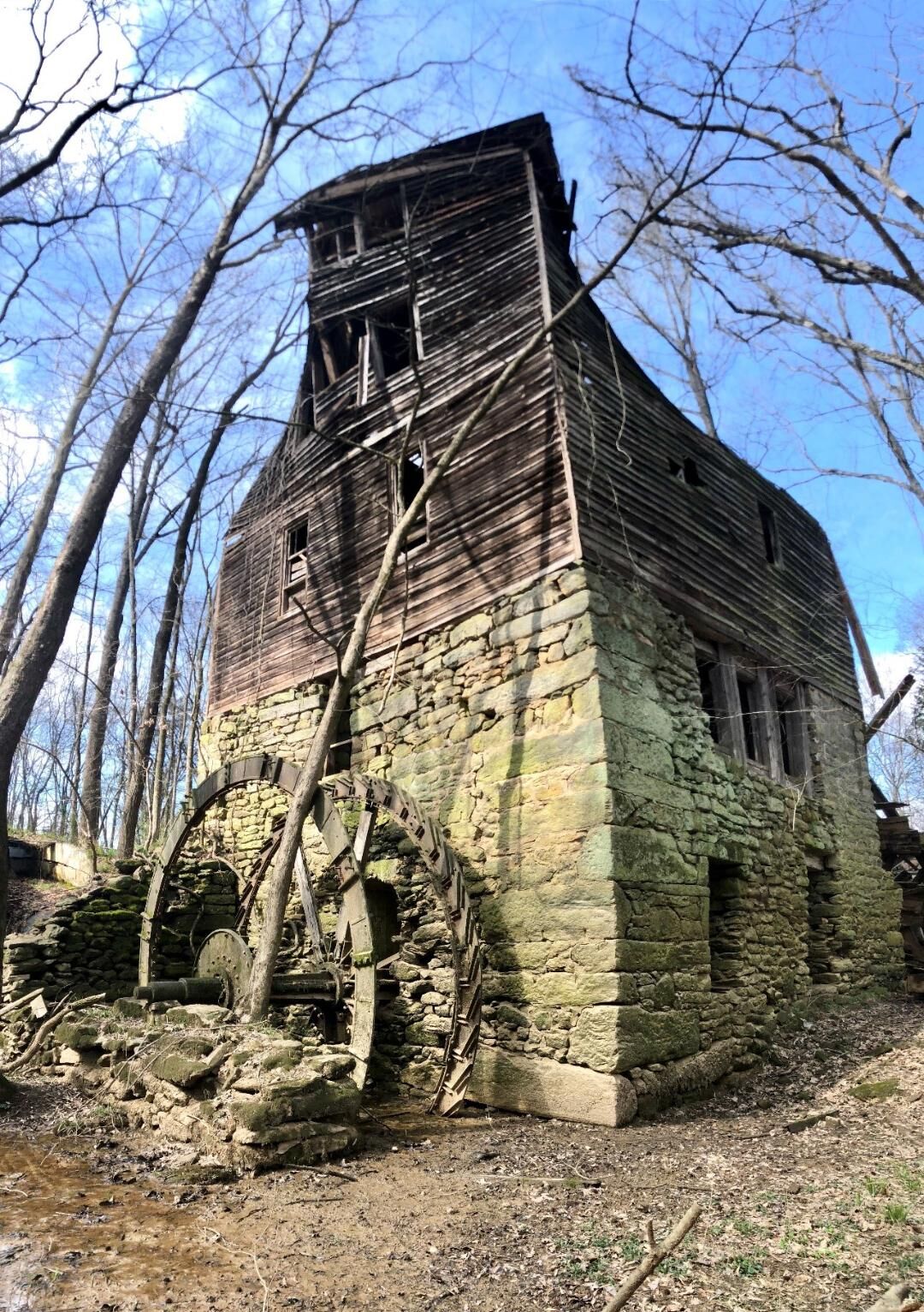 Giles Mill, likely constructed in the early 1800s on Virginia’s Appomattox River, consisted of a mill, store, corn crib, headrace, millpond and other associated structures. This remaining structure collapsed not long after this photo was taken in March 2020. (Brendan Burke) 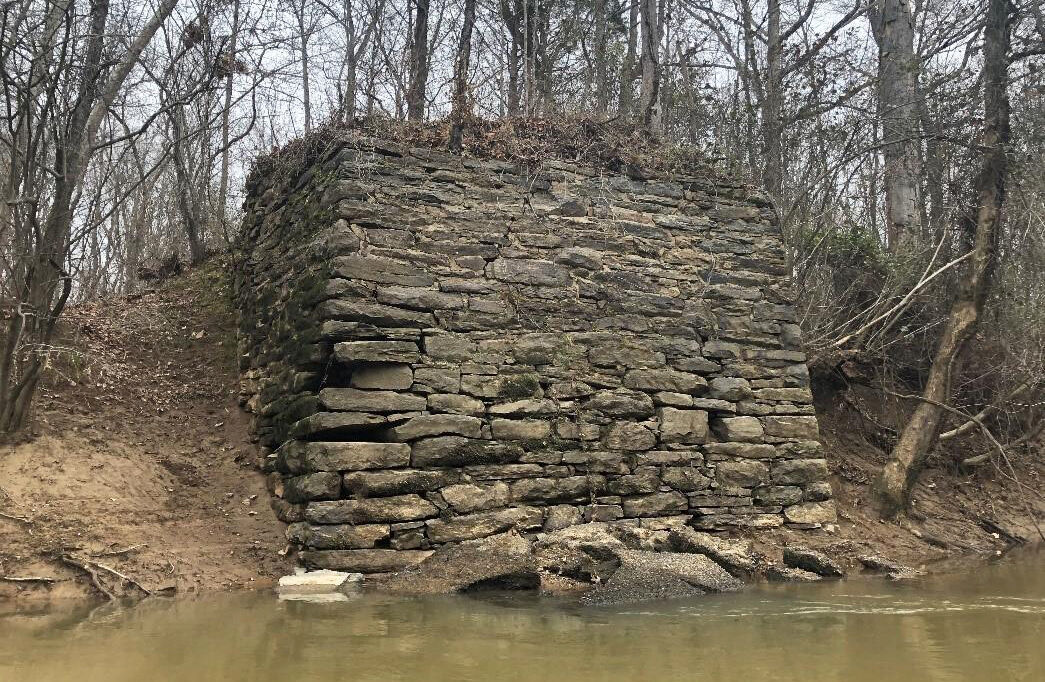 In 1612, Capt. John Smith became the first European to produce a detailed map of the Chesapeake Bay region. He used the same mode of transportation that cartographers had used for millennia: a boat.

Water routes — like the vast network of rivers and creeks in the Chesapeake region — have been essential for nearly all of human history: to explore and migrate, to procure and transport food and resources, to wage war, and to conduct trade and commerce.

“Waterways were incredibly important, and have been for thousands of years,” said archaeologist Brendan Burke, president of the Maritime Heritage Chapter of the Archaeological Society of Virginia.

“They’re landmarks. They define areas and places. We now think of boundaries as lines on maps, but very often they were defined by waterways — your country, your province, your kingdom, whatever.”

The mammoth Bay watershed with its extensive maze of tributaries stretching more than 64,000 square miles — from what is today New York to West Virginia to Virginia’s southern tip — was particularly appealing to colonists precisely because of the relative ease of travel by water.

Any river or creek navigable by canoe was by nature a watery road, Burke said.

But over the centuries, other modes of transportation have replaced water routes. Once-bustling riverside communities petered out, buildings and bridges tumbled and canals dried up. Wetlands and forests resurged to supplant them.

Field surveys can document what’s left. And Burke, who studies the role of rivers in trade and commerce, recently finished field work on a portion of the Upper Appomattox.

Burke’s work there was not the first. In the 1970s and ‘80s, Virginia historian Bill Trout set out to inventory historic features along the Appomattox, from its confluence with the James River at Hopewell in Prince George County to its navigable head near Planterstown, a historic community in Buckingham County.

Trout, founder of the Virginia Canals & Navigations Society, focused his survey on areas where land and water were altered to enable waterborne commerce — the places where people cleared, deepened and straightened streams, installed canals and locks, and built bridges and aqueducts. He documented the many mills that sprang up along the riverbanks to harness the power of the water.

But Trout’s inventory is starting to show its age.

“Anybody that’s lived along the waterways knows that waterways are in constant change,” Burke said. “They never stay the same. The stream bank might be moving to and fro, sandbars cover and uncover things. We have better technology now. Bill had a canoe and his eyeballs and a camera, and Bill did wonderful work — he’s a friend of mine — but much of that work was done 40 years ago.”

Burke’s more recent survey was supported by a $10,000 grant from the Virginia Department of Historic Resources. He focused on historic navigational structures and resources from 1740–1880 that directly related to commerce.

“It’s an important part of archaeology not to just say, ‘I’ve done it, now I can walk away,’ but, if the site’s still there, to check in on it, see what’s left; or, is there more of the site that was exposed and never seen before,” Burke said.

There was some urgency in the mission: Because of more intense flooding and erosion associated with climate change, plus easier public access to remote areas, such sites are increasingly at risk from storm damage, vandalism and looting.

The Appomattox flows west-east for 157 miles along or through parts of 10 counties before joining the James. Its largest cities are Farmville and Petersburg. Flat Creek is one of its tributaries, running 34 miles.

It was largely the Virginia colony’s lucrative tobacco trade that fueled inland migration and the need to get the crop to market and ports in Europe. Other crops like wheat, corn, oats, barley, salt and lime, as well as animal skins and fur, were also loaded on bateaux and canoes and carried on the river.

It was crucial to keep those waterways navigable. In 1745, the Virginia House of Burgesses forbid felling a tree across a navigable river or creek or failing to clear fish weirs by October each year. It also allowed counties on the upper Appomattox and James to send teams to clear obstructions every spring. Mill owners were not allowed to build dams that blocked boat traffic.

In 1795, the Upper Appomattox Company, a public-private shareholding venture heavily subsidized by the state, was formed to build the river improvements needed to keep boats moving. From 1794 to the 1870s, Burke writes, there were a total of 13 canal companies and 22 navigation companies throughout Virginia.

By 1821, the Appomattox had four mills with dams requiring locks: the Genito, Clementown, Stony Point and Royaltown. Mills typically became gathering places for farmers and merchants. Communities sprang up around them, often taking on the name of the mill.

By 1840, more than 100 miles of the Appomattox were more navigable. Cargo volumes on the river skyrocketed.

But there was a storm brewing: In the late 1840s, a startup called the Richmond and Danville Railroad was chartered.

Rails could go where rivers couldn’t, and carry cargo and people more efficiently and reliably.

Within just a few years, canal companies were crippled. By the end of the Civil War in 1865, river trade had, for all intents and purposes, dried up.

“It was unfortunate, because for a lot of these canals, it was a huge undertaking,” Burke said. “It took multiple phases, investment strategies and even failings to get the whole system up and running. And by the time they got all that done, after about 30 years, the railroad comes along and basically buys it and puts the tracks down on top of the towpaths.”

As Burke writes, the last known boatman to ply the Appomattox for commerce was a man named Jim Seay around the turn of the last century.

To catalog what remains of the heyday of the Upper Appomattox river trade, Burke set out in December 2019 in a 49-pound kayak/canoe. Fourteen days of field work stretched over three months in all kinds of weather.

Field notes were impossible while paddling, so he hung an iPhone on a lanyard around his neck for audio notes and photographs.

“Being on a river by yourself, where you’re kind of drifting with the kayak, is a really magical experience. It’s just you and the wood ducks,” Burke said. “And then you’ve got a lot of — I don’t want to use the term ‘ghosts’ — but you’ve got a lot of historic eyes watching you.”

Whenever the river became impassable from fallen trees or other impediments, he set out on foot to gather research and interview local landowners. He covered nearly 37 miles by foot and boat.

“Some of that might have just been the water was too high at the time,” Burke said. “And other sites had just naturally changed over the course of erosion and natural forces. It’s good to document that rate of decay. It would be unrealistic to think that everything had stayed the same for 40 years.”

But many other features still hang on — the ruins of mills, dikes, canals, bridges and earthen fortifications.

Giles Mill, for instance, also known as Royaltown Mill, was a grand five-story structure and “beautiful piece of architecture,” Burke said. It was built in the early 1800s and expanded over generations and is the subject of some of his most striking images.

The building’s owner had tried unsuccessfully to find a way to preserve it.

“He was very kind to allow me permission to explore it,” Burke said. “And not long after the ink had dried on the report, the mill collapsed. It was the last standing mill in Amelia County, so I was honored to see it before it was taken to its knees.

“But that’s what happens to communities: They come, and they go.”

All that remains of Goode’s Bridge, built in the early 1700s, are large stone abutments rising at least 30 feet high on the riverbanks. The bridge was first mentioned in the House of Burgesses in 1746. In 1781 during the Revolution, it was blocked by Continental forces; during the Civil War, portions were burned in a vain effort to prevent U.S. cavalry from crossing into Amelia County. The bridge was finally abandoned in the 1960s when a new highway was built.

And all that’s left of Tucker’s Ford, Lock and Dam, a 19th-century river crossing, is a low stone feature, likely part of the original lock, and a shallow depression, once the canal. LIDAR imagery suggests where the old roadbed led to the river and the ford.

In his report, Burke recommends more enhanced surveys of the riverbanks in the summer and during periods of drought when water levels are lower and historical features more visible. He would also like to see more surveys with LIDAR and sonar imaging for deeper water.

He’d like oral histories of inland navigation collected, coordination with local historical societies and riverkeepers, and more emphasis on public outreach and education about a fading heritage.

“Ideally, what you would do is develop a sense of community ownership for historic resources and prehistoric resources,” Burke said. “Where folks say, ‘Let’s preserve these things intact — that way, the grandkids and the great-grandkids can enjoy them just like us.’

“When you move past a stone pile of rubble that once was a mill dam around which people congregated and shared news and laughed and wept and did all the things that humans do, and now it’s just a pile of rubble, it’s neat to know and learn about the stories of those folks. About how communities formed and failed and why that matters.”