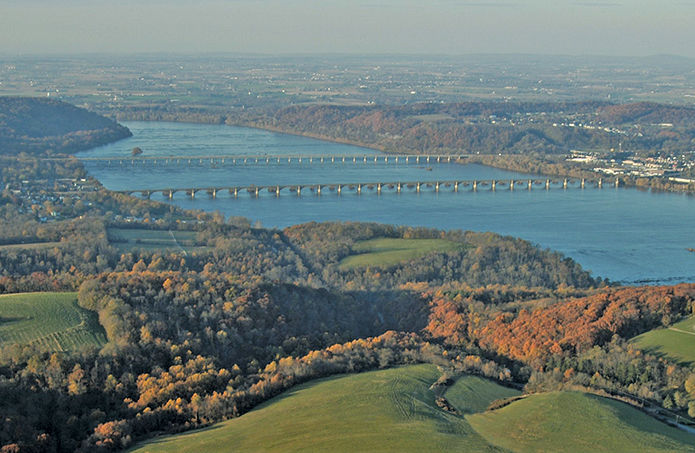 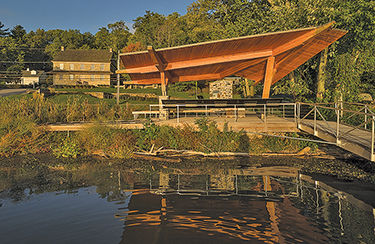 A kayak launch at the Zimmerman Center for Heritage provides access to the Susquehanna River as part of the Captain John Smith Chesapeake National Historic Trail. 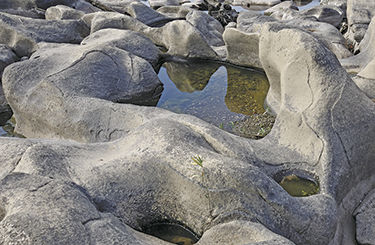 Depressions in boulders, sculpted by Ice Age currents and swirling debris, known as potholes, lie in the Conewago Falls section of the Susquehanna River. 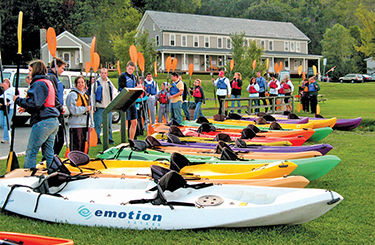 The creation of the new Susquehanna National Heritage Area is expected to boost recreational activities on the Susquehanna River. (Shank's Mare Outfitters)

The majestic Lower Susquehanna River, its vistas, wooded hills, sculpted potholes — in the river rocks, not roads — and its place in shaping U.S. history will get more attention now that it has earned a seat among the nation’s other 54 national heritage areas.

The Susquehanna National Heritage Area was recently created by Congress and President Donald Trump, after 11 sometimes frustrating years in the making. It includes 53 miles of the river at its widest and deepest point and all of Lancaster and York counties to the Maryland line.

“The Susquehanna is so significant to American history, and it is such a special place. I think it deserves it,” said Mark Platts, president of Susquehanna Heritage, a nonprofit coalition of partners from both counties that pushed for the designation and will guide its moving forward.

“It was part of our vision to be a national destination,” he said. “The heritage area is seen as a vehicle to do that. We would like to see a combination of more recreation and interpretation.”

That means more programs and experiences for visitors and the area’s residents alike.

The designation brings the heritage area under the umbrella of the National Park Service and its familiar brown logo. Local officials hope the increased recognition and visibility will mold the two counties into a national destination where visitors can take in natural, historical and cultural features — some already well known, some not so much.

The National Park Service already has been a partner on several river-related projects in the area, helping to fund a map and guide in 2003 for the Susquehanna River Water Trail and improving the Zimmerman Center for Heritage in 2006 so that the riverfront site could become a visitor center and passport station for the Captain John Smith Chesapeake National Historic Trail. A ranger stationed there offers family programs.

Platts thinks the park service’s presence has increased attention on the area and helped to nail down the Congressional support that led to creation of the national heritage area.

Though the new heritage area will develop and promote opportunities throughout the two counties separated by the Susquehanna, a river will be the umbilical cord that ties everything together.

Native Americans used the area along the river and its tributaries for at least 11,000 years before European settlers arrived as part of William Penn’s experiment in religious freedom.

The Susquehannocks, later called Conestogas, were the largest tribe in the area, but there also were Mohawk, Seneca, Shawnee and Nanticoke, Ganawese and Delawares — some seeking refuge in the area with permission from Penn.

John Smith, during his exploration of the Chesapeake Bay and some of its rivers, only made it a few miles up the Susquehanna in 1608. But he met with members of the Susquehannock tribe from present-day Lancaster County and was impressed by the athletic and tall tribesmen whom he described as “giants.”

As settlers continued to enter the area, Native Americans were driven away. The last known to be in the area were murdered in 1763.

Over time, the Susquehanna made the area a national nexus of early commerce with its canals, railroads, shad runs, rafts of timber and iron furnaces. The river town of Columbia in Lancaster County, in fact, wielded such economic might that the town failed to become the nation’s capital by just a single vote in Congress in 1790.

The river also was a natural barrier that figured prominently in two wars.

During the Revolutionary War, the Continental Congress fled Philadelphia, crossed the Susquehanna and met in York for nine pivotal months. The Articles of Confederation were written there and George Washington survived an effort to remove him as commander-in-chief.

In the Civil War, Confederate Gen. Robert E. Lee’s plan to invade Pennsylvania was thwarted when Union forces burned the covered bridge across the river at Columbia. Lee’s forces retreated, resulting in the epic Battle of Gettysburg.

For a time, the river was a gateway to the untamed West. “Those risk takers crossed the river. To this day, the cultures of people in Lancaster and York counties are different,” Platts said.

Preservation of the wooded hillsides that cloak both sides of the river’s gorge has been a longstanding effort. For example, the Lancaster County Conservancy, aided by the state, has acquired more than 1,800 acres of former utility-owned woods along the river over the last decade. The ongoing state-private effort to preserve woodlands on both shores is called the Susquehanna Riverlands.

Surprisingly, the corridor retains a large amount of its natural character, even though the stretch contains a nuclear facility, two hydrolectric dams, a pumped storage reservoir, power plant and incinerator.

The segment between the Maryland line to just south of Harrisburg has a wide range of natural features, from overlooks that peer down into the gorge, the jutting Chickies Rock with its sweeping vista — a regional magnet for rock climbers — and the water-sculpted potholes at Conewago Falls.

Two outfitters, one on each side of the river, supply paddlers. Two hiking and bicycling trails, one in the old bed and mule paths of the Pennsylvania Canal, parallel the Susquehanna near the river’s edge and include great views.

The dams create quiet water, while above them the river flows free and swift. The two different environments attract a variety of freshwater game fish popular with anglers.

Though the river will be front and center, the heritage area development will include attractions throughout the two counties that shaped the area’s history and culture. Among them will be destinations revolving around the Underground Railroad, Plain Sects, agricultural bounty, President James Buchanan, abolitionist Thaddeus Stevens, Native American history and others.

Quaint old river towns such as Columbia, Wrightsville and Marietta, each undergoing revitalization efforts, are expected to benefit from the national designation as they seek to become tourist destinations. One of them may host an envisioned Museum of the Susquehanna.

“It’s going to be a big help to be able to use that as an advertising piece and say, ‘Come to the area and see our antique shops, see our history and come along and see the river,’ ” said Columbia’s mayor, Leo Lutz.

Partners in the heritage area will get busy on a management plan over the next couple of years. They are already planning a big launch over Memorial Day weekend with pontoon tour boats on weekends to take visitors between the Zimmerman Center for Heritage on the York County side of the river to Columbia and its Columbia Crossing River Trails Center to the east. The two facilities will be hubs for visitors to the heritage area.

A guide will be on board and passengers will learn about the Native Americans who lived along the river and Smith’s historic visit. They will also see and learn about river features, such as a natural rock ledge and the unnatural remains of an old dam that was built to tow canal boats across the river below what was the world’s longest covered bridge.

If successful, the tour boat trips could be expanded to take bikes and kayaks between the two shores. Land-water shuttles are another possibility in the future.

Set your sights on the Susquehanna

Thinking about checking out the Susquehanna National Heritage Area in Lancaster and York counties, PA? Here are some of the recreational, historical and cultural attractions:

≈ C onestoga Trail: A rugged 14-mile section of the trail goes through ravines and ridges on the Lancaster County side of the Susquehanna.

≈ Enola Low Grade Rail Trail: This 28-mile route on a former freight railroad, features about 5 miles along the Susquehanna, including the Turkey Hill Trail to a scenic vista, 2459 River Road, Washington Boro.

≈ Indian Steps Museum: This is perhaps the first public museum in the United States for Native American culture. Its local artifacts date back to 10,000 B.C. 205 Indian Steps Road, Airville.

≈ Mason-Dixon Trail: A section of the 193-mile trail follows the Susquehanna in the River Hills of York County.

≈ Native Lands County Park: This 180-acre preserve of woods and meadows on the hills above the Susquehanna River includes the site of a Susquehannock settlement. 1664 Long Level Road, Wrightsville.

≈ Northwest Lancaster County River Trail: Walk or bicycle a 14-mile trail along the river connecting the towns of Columbia, Marietta, Bainbridge and Falmouth.

≈ York County Heritage Rail Trail: Walk, bicycle or travel by horseback on a 21-mile trail from the Maryland line to York.