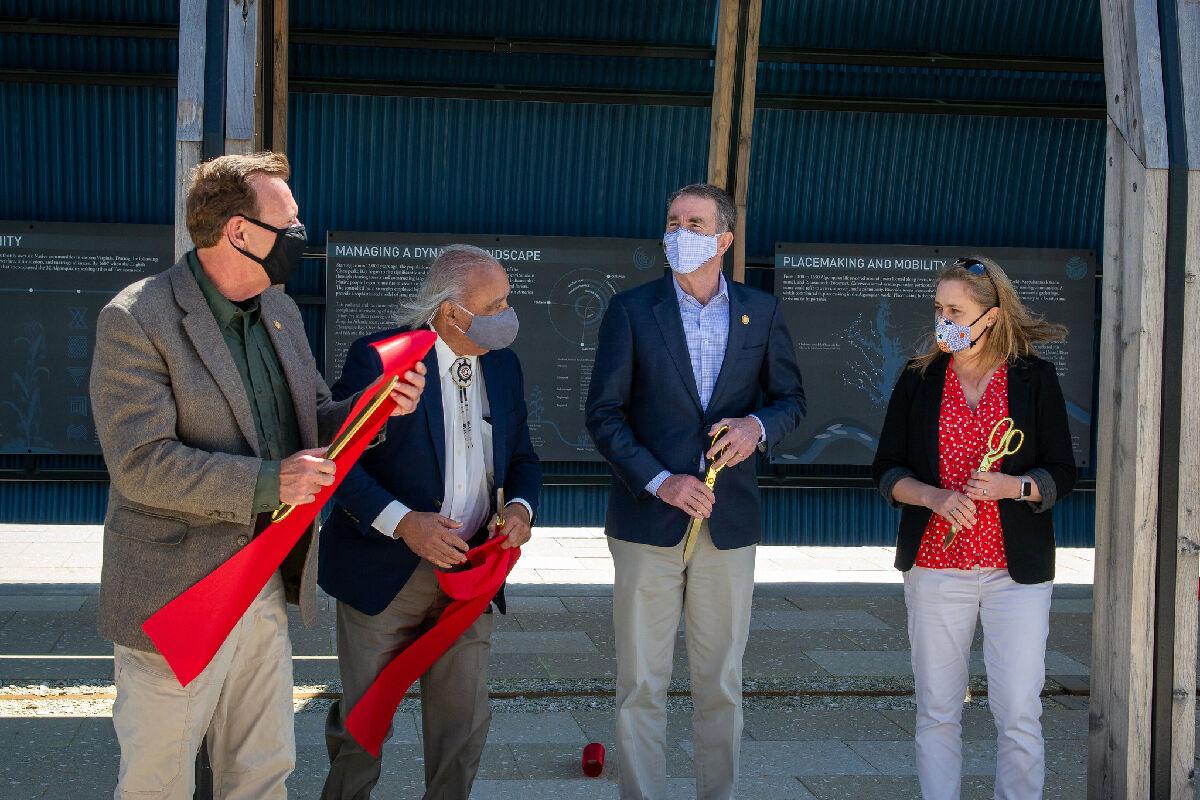 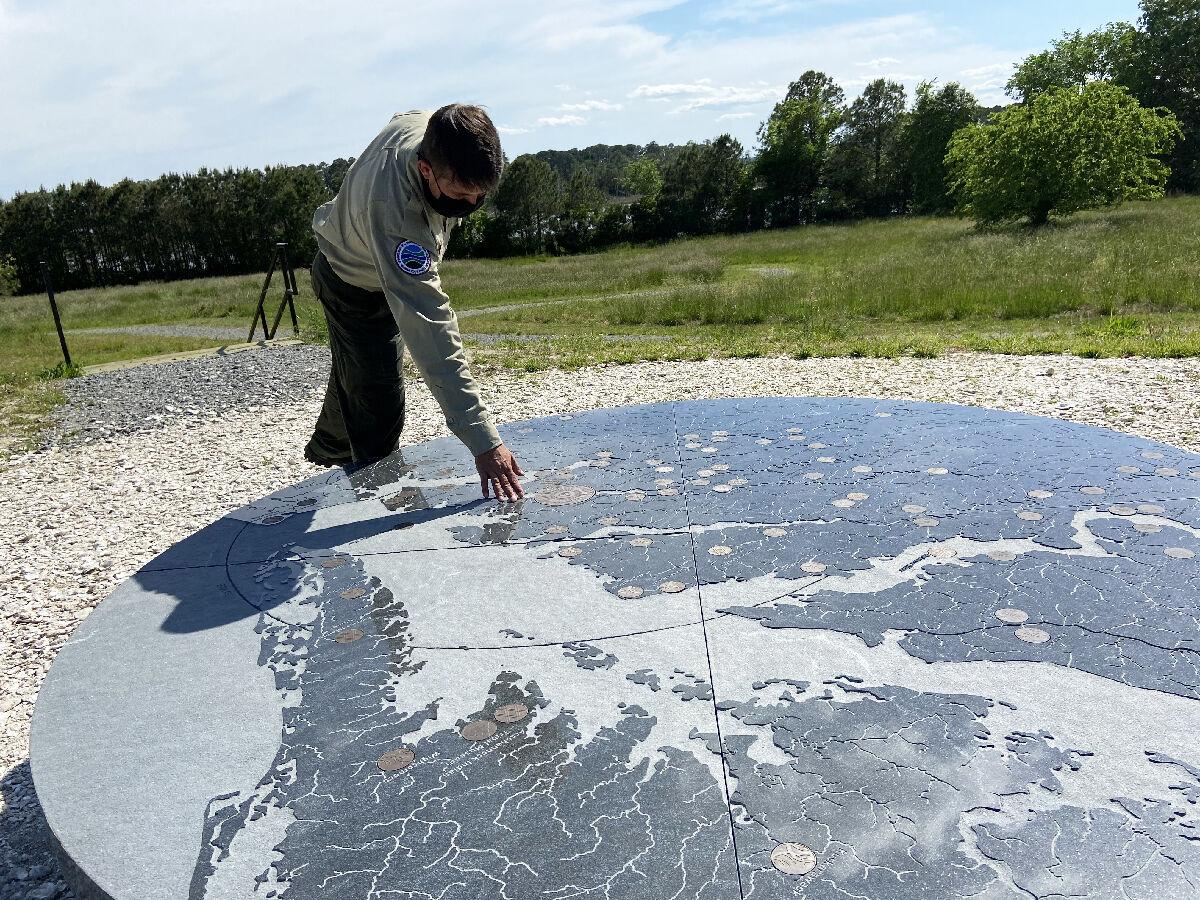 Terry Sims, manager of Machicomoco State Park in Virginia, examines a circular display showing the locations of the tribes that made up the Powhatan Confederacy in the Chesapeake Bay region. 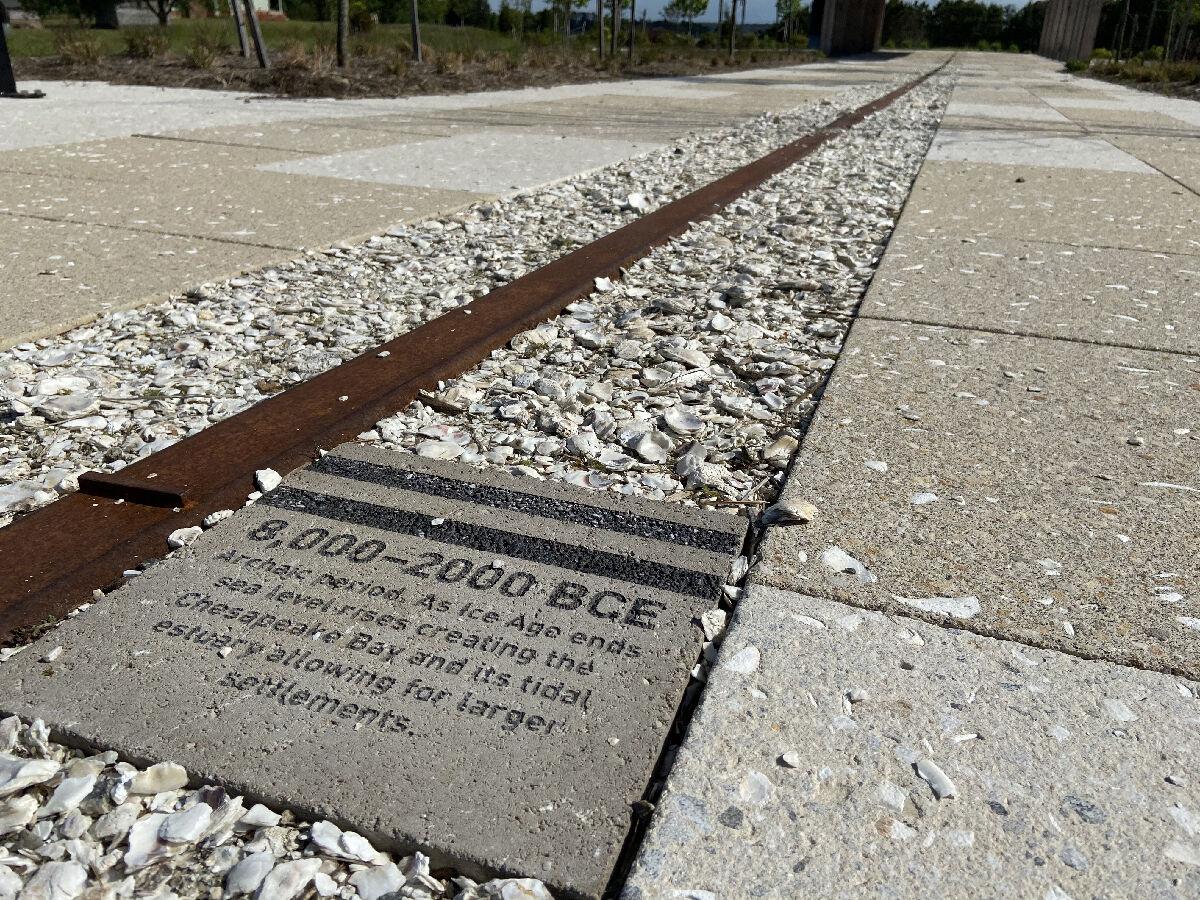 Gray pavers like this one lead visitors to Machicomoco State Park through a physical timeline of Virginia’s Native American history. 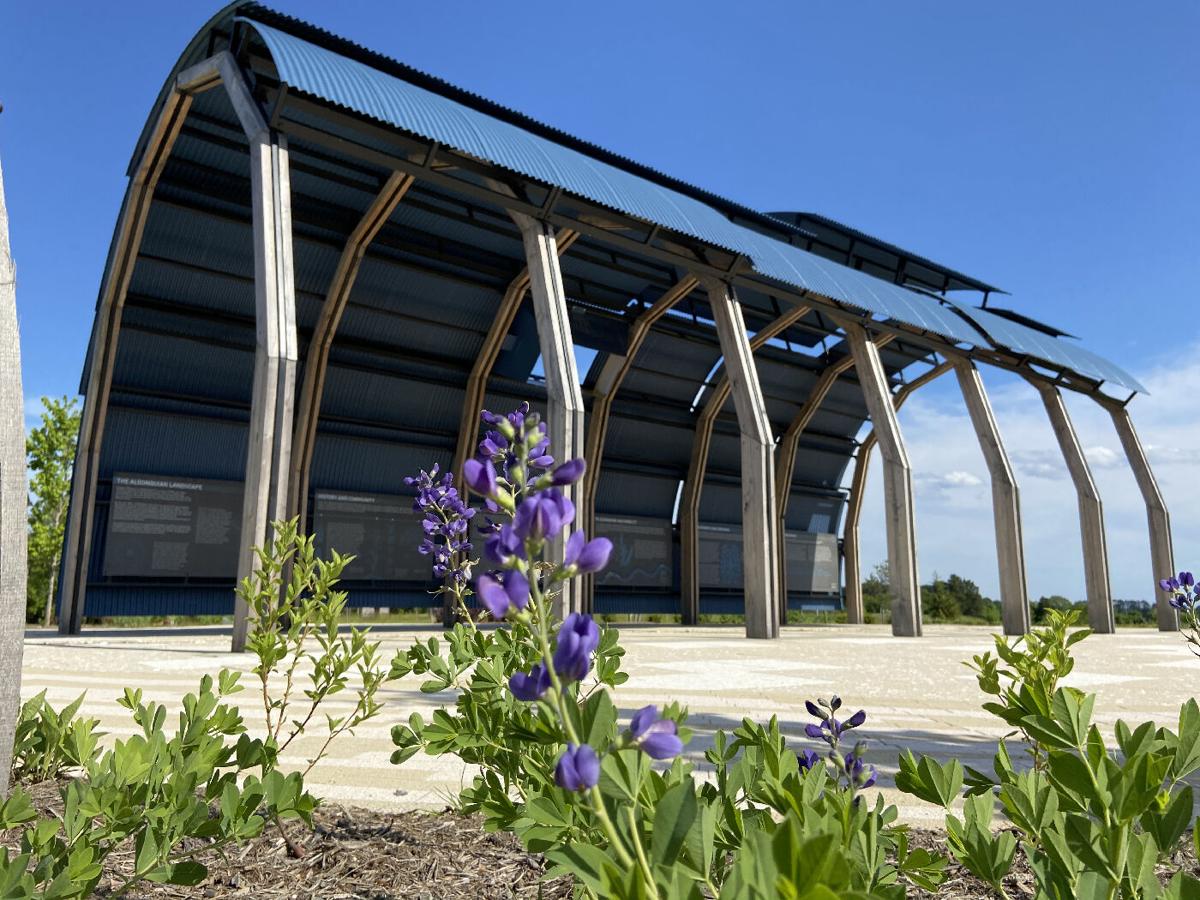 An open-air structure designed to resemble a Native peoples’ longhouse is the interpretive centerpiece at Machicomoco State Park in Virginia. 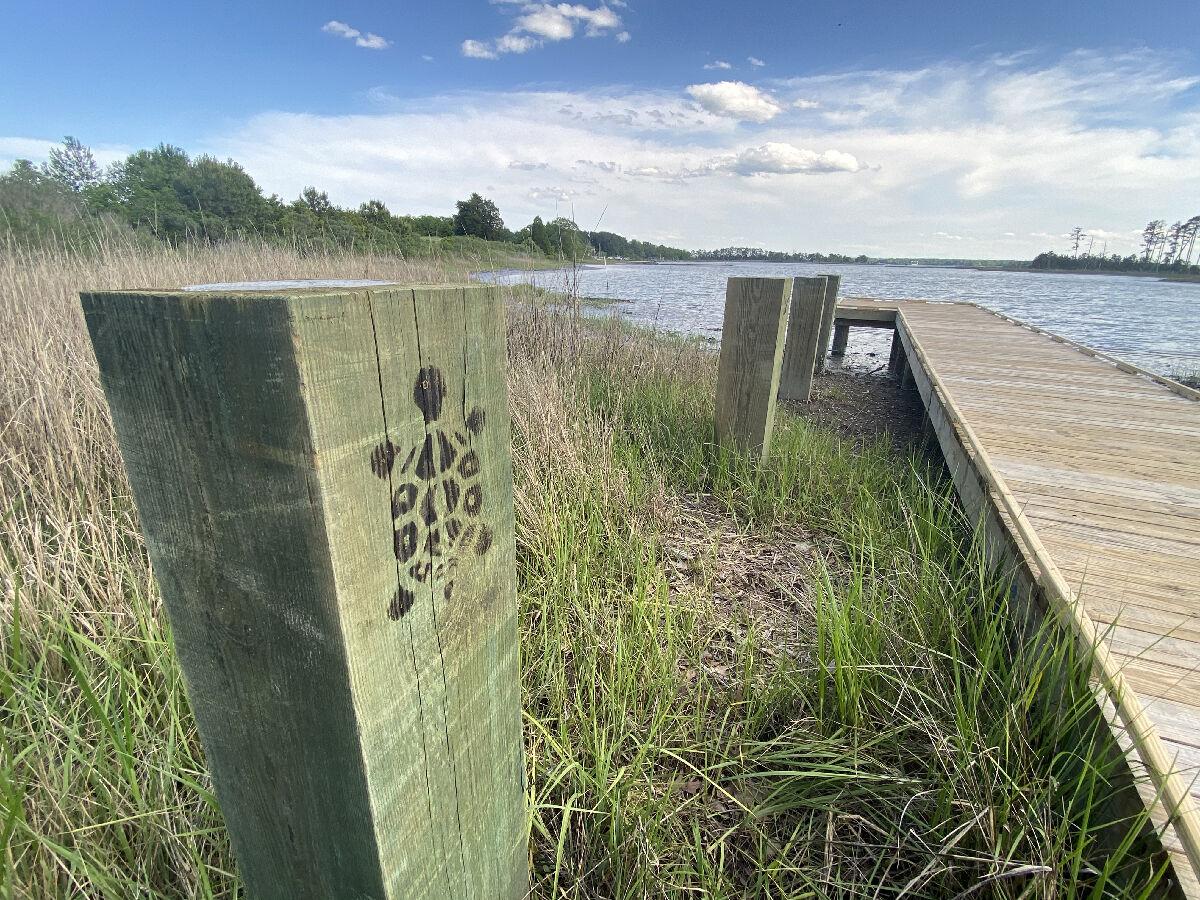 A wooden pier stands over a small creek at Machicomoco State Park in Virginia. Along the path, visitors can glimpse artistic silhouettes of local flora and fauna etched into wooden posts.

When Machicomoco State Park opened April 16, it was ordained as Virginia’s 40th state park. But in Stephen Adkins’ eyes, it was the first — the first to fully commit to sharing the history of his people.

“Our Native culture has been sidelined, and the dominant culture story has just been repeated and repeated,” the Chickahominy Tribe chief said during a dedication ceremony that day for the park, with Gov. Ralph Northam standing just feet away. “A history that’s been held hostage for so many years, Gov. Northam, [that] you’ve helped to ransom.”

To be sure, other state and federal holdings in Virginia touch on indigenous history — for example, the complex struggle between English colonists at Jamestown and the Native inhabitants of the area or the role of Indian fighters at the Yorktown battlefield. But none of those places tell this history completely or from the viewpoint of Virginia Indians, officials now acknowledge.

“Historic justice acknowledges that we have done an injustice by not fully honoring or telling a people’s story,” Northam said during his turn at the lectern. “And that is certainly true with regard to Virginia’s Indians.”

The 645-acre property is flanked by a mixture of farmland and rural subdivisions on the north bank of the York River, known to Native Americans as the Pamunkey. Its centerpiece is a corrugated-roofed interpretative pavilion designed to call to mind the longhouses that were the indigenous peoples’ primary type of dwelling.

The walkway leading to and through the structure is embedded with engraved stone pavers that take visitors through a timeline of American Indian history in the region. Both elements overlook the York.

In the early 1600s, when the first colonists arrived in Virginia, the people who lived on what is now the Gloucester County parkland were part of the sprawling Powhatan Confederacy, a coalition of approximately 30 tribes that stretched from Tidewater Virginia across the Chesapeake Bay to the Eastern Shore. Archaeological digs conducted during the park’s recent development show ample evidence of Native activity on the property.

Hence the name dreamed up for the park: Machicomoco, an Algonquian word meaning “special meeting place.”

But if it weren’t for an economic downturn and the efforts of preservation-minded local residents, there might have been no place for modern visitors to meet at all, according to the park’s advocates.

For years, the acreage was known as Timberneck Farm and belonged to the Catlett family. Their farmhouse, built around 1800, still stands on the property not far from the main pavilion. In 2007, the land was sold to a residential developer, who began carving it into 50 large-lot housing parcels. About 4 miles of roads and an accompanying bike trail were paved before the Great Recession the next year put a halt to construction.

By 2017, the housing market had revived. Timberneck was weeks away from being sold to the highest bidder when local conservationists contacted the Arlington-based Conservation Fund, which seeks to protect land while boosting the economy. The nonprofit bought the land for $15 million, giving state officials time to put their park plans in place.

“Can you imagine houses all over that place?” asked Anne Richardson, chief of the Rappahannock Tribe. “That would have been horrible.”

Funding for the park’s development came from an unlikely source: Dominion Energy, which paid $25 million to the state as mitigation for a controversial transmission line project across the James River.

The landscape architecture firm of Nelson Byrd Woltz, whose projects have ranged from the Flight 93 Memorial in Pennsylvania to the Lynchburg, VA, riverfront revitalization plan, was hired to design the facility. Because of its proximity just 10 miles downriver from the ancient town of Werowocomoco, the most important place in the Powhatan culture, the parkland was pursued as a showcase for Native American history.

Meanwhile, the National Park Service is working to develop 264 acres of land at Werowocomoco into a separate park.

“This was a story that could be told from the Algonquian people and something not seen from other parks in this area,” said Jen Jessup, the project’s manager from Nelson Byrd Woltz. “It’s a different perspective.”

One of the most compelling contributions from the Native partners was the suggestion of using Algonquian words in the interpretive signs and other materials, said Thomas Woltz, the firm’s owner. In the dominant U.S. culture, nature is almost an afterthought, he said, adding: “We’ve lost our way in the modern world when we separate those two things. These words give you a glimpse into that sensibility.”

One of the placards in the longhouse structure displays the names of the Native peoples’ five seasons of the year and what they were doing during those times. For example, from Cattapeuk (early spring) through Taquitock (early fall), they would fish for sustenance.

Although Native communities harvested billions of oysters across the Chesapeake region, archaeological evidence shows that the size of the oysters and the quantity of them in ancient trash piles didn’t decline over time, showing that harvest levels were sustainable.

By 1607, when the English arrived, the Powhatan chiefdom numbered about 15,000 people among approximately 32 tribes. They lived in small towns on the region’s many rivers. Machicomoco does not appear to have been part of these communities, but a vast collection of oyster discards and other food debris discovered along its waterfront during recent digs suggests the area was used by Native people as far back as about 4,000 years ago, officials say.

Machicomoco was originally scheduled to open last year — the last brick in the timeline walkway still states “2020” on the top line and below it “Machicomoco Park opens” — but the COVID-19 pandemic delayed it until this past spring.

The park contains many of the amenities that parkgoers expect: a 30-site tent and RV campground, a kayak and canoe launch, restrooms and a park office. The roads installed by the developer were retained for vehicle traffic, and the bike path is now part of a circular, 6-mile trail system within the park. A swath of the central portion of the park continues to be farmed. During a visit in early May, neat rows of corn sprigs gave hint to the coming bounty.

An ‘inclusive and serene’ place

The park hits all the right notes, said Richardson of the Rappahannock Tribe.

“We just wanted it to be really inclusive and serene. And we wanted the [historical] information to be there,” she said. “It causes the next generation to think about, ‘When you have places that look like this, do you really want them to be developed?’ ”

Richardson looks forward to inviting all 267 members of her tribe for a special tour of the park once the coronavirus pandemic has fully subsided. And she can see hosting powwows or other ceremonies at the park as well

“It’s really the first place that we’ve had that we could do that,” she said.

Machicomoco is part of a larger effort by Virginia State Parks to be “more inclusive” with the stories it presents to the public, said Melissa Baker, the agency’s director.

“There was a gap for us to tell the story of the Native Americans that we hadn’t been telling yet,” she said. “I feel it really does honor the tribes of Virginia.”

Virginia State Parks officials say they will begin drafting a 10-year master plan for the park with input from the public some time soon. That document will determine what further amenities may be installed and how other elements, such as the farmland, will be used.

As he gazed across the land, Adkins said the park represents the kind of places where Indians hunted, fished and cultivated the earth — and where the state’s 11 recognized tribes continue to do so.

“This offers us a foothold that ensures our story continues to be told,” he said.