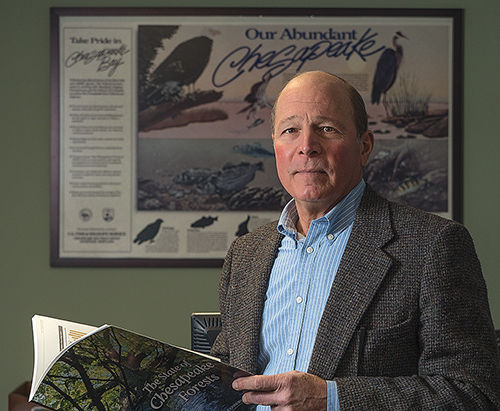 Nick DiPasquale retires after 6.5 years as director the of the Bay Program. Many say the state-federal partnership is stronger today than when he arrived. 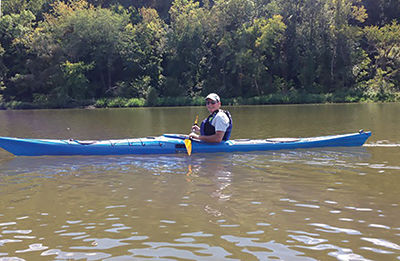 While kayaking in a couple of Chesapeake Bay tributaries last fall, Nick DiPasquale experienced some good news firsthand — by nearly getting stuck.

“The grass beds were so thick you basically got hung up in them,” he recalled of his excursions to the Mattawoman and Gunpowder rivers. “It was almost like being on land.”

As DiPasquale wrapped up his 6.5-year tenure at the helm of the state-federal Chesapeake Bay Program partnership, the Bay has had some of its best water quality in years. Underwater grass beds have surged to their highest level in decades.

“I am encouraged, probably more than any other indicator, with Bay grasses,” DiPasquale said in an interview shortly before his retirement at the end of December. “Kayaking gives you an upfront and personal view of all that.”

The return of underwater grasses may have reached a “tipping point,” he said, where enlarging beds, spurred by improved water clarity, are fueling even bigger, denser beds with increased plant diversity — something that bodes well for the future.

“I don’t know that I would have been as optimistic when I first came here,” DiPasquale said. That was in the summer of 2011, when he was named to head the Environmental Protection Agency’s Bay Program Office, which coordinates state and federal actions aimed at restoring the nation’s largest estuary.

“I thought the challenge was too great. I am more optimistic now that it is possible,” DiPasquale said. “My concern, obviously, is that we’ve seen a change in administration, a change in direction in terms of the benefits of these programs. That is certainly a concern.”

He left at a time when the Trump administration wants to eliminate the Bay Program, which historically has garnered bipartisan support across changing presidential administrations. The EPA’s Bay Program staff is shrinking, and its office may be yanked out of Annapolis and away from other agencies and organizations working on Chesapeake issues.

Still, many say the state-federal partnership is stronger today than when he arrived. “It’s been a good watch. He’s been an effective skipper,” said Bill Dennison, vice president for science applications with the University of Maryland Center for Environmental Science. “Apart from the federal craziness at EPA, the Bay Program, I think, is stronger than ever. I think the partnership aspects have worked really well in the last six years.”

For years prior to his arrival, the Bay effort was largely consumed by the complexity involved with writing the Chesapeake Bay Total Maximum Daily Load — the regulatory cleanup plan that guides nutrient reduction efforts throughout the watershed.

Agencies, organizations and people not closely tied to water quality issues began to drift away from the program’s activities. Regulatory requirements of the TMDL overshadowed many of the more voluntary actions that the state-federal partnership had been involved with over the years, from coordinating fish passage efforts to promoting regional initiatives such as planting streamside forests.

Some questioned whether, with the TMDL in place, there was even a need for a Bay Program.

“Those first few years after the TMDL were a tough period of time,” said Al Todd, who became executive director of the Alliance for the Chesapeake Bay around the same time that DiPasquale started at the Bay Program. “Nick really got the idea that it was the big picture that is important. He put a lot of focus on those non-water-quality elements of the program that had been missing for awhile.”

That showed as DiPasquale helped to lead efforts to write the new Chesapeake Bay Watershed Agreement, signed in 2014, which he considers the biggest accomplishment of his tenure.

The agreement contains objectives for restoring oysters, improving habitat for brook trout and black ducks, protecting land, expanding citizen stewardship and a host of other activities. It reflects his view that restoring the Bay is about more than cleaning its water. The agreement laid out a vision for the future — and it increased the involvement of agencies and organizations in the Bay effort, including some that had never previously worked on Chesapeake issues.

“The reason I was attracted to this position was that it was an ecosystem-based program,” DiPasquale said. Water quality is important, he said, but so is managing fisheries, habitats, protecting land and promoting environmental literacy.“That’s the way the world works. And if you’re going to fix it, you’re going to have to deal with all of those parts.”

The Bay Program job was DiPasquale’s first position with the EPA. He had worked primarily in state government, most recently in Delaware and Pennsylvania. At meetings, he often said he was a representative of the Bay Program — not the federal agency — and would designate another EPA staffer to speak on its behalf.

“This over the years has been difficult to explain to the EPA, that while they pay my salary, I really work for the partnership and I have a responsibility to act on decisions that the partnership makes,” DiPasquale said. More than once, this perspective led to conflicts with higher-ups.

Maryland Environment Secretary Ben Grumbles, himself a veteran of the EPA, acknowledged that representing the agency while trying to work with other agencies and states can lead to a lot of tension. DiPasquale, he said, balanced the task well.

“He’s a real trooper for the Chesapeake Bay and multi-state collaboratives,” Grumbles said. “He was a great listener, and he worked hard to find common ground in a very difficult position.”

Grumbles and Maryland Natural Resources Secretary Mark Belton in December honored DiPasquale as an “Admiral of the Chesapeake.” The lifetime achievement award is the highest honor the Maryland governor can bestow on an individual for their environmental contributions.

The job was filled with other frustrations. When stream restoration projects were being held up by the permitting process — regulators made no distinction between restoration projects and development projects — he led an effort to streamline the process. “That was a couple years of my life, working on that.”

DiPasquale also helped to push the Bay Program in new directions. He saw the potential power in new technology that could provide satellite imagery of the entire Bay watershed at one-square-meter resolution — a tool that has, literally, provided a sharper picture of what’s happening on the land and how water drains off it. The images help people to better understand land use trends and identify where pollution control efforts will be the most effective. The images also help to prioritize lands for protection.

“Nick broadened the perspective of the Bay movement to look beyond just the water column,” said Joel Dunn, president of the nonprofit Chesapeake Conservancy, which has worked to produce the high-resolution picture of the watershed. “That’s why I think the land cover project was so important to him, because he understood the relationship of land use to water quality and how you needed that perspective to protect and restore the Bay.”

DiPasquale also emphasized citizen involvement with Bay activities. He got first-hand experience working with the Spa Creek Conservancy in the watershed where he lived in Annapolis, an all-volunteer group that has helped to install stormwater controls at car dealerships, small marinas and other businesses in the area.

“There is a lot of good stuff going on,” he said. “A lot of people dismiss those as more like a demonstration project. But they are definitely making a difference in my mind.”

He also pushed the Bay Program to use data collected from a growing network of citizen monitoring programs to help track regional trends.

As he left the Bay Program, DiPasquale said he saw the engagement of a broader swath of the watershed’s citizens as one of the program’s greatest challenges. “We need to be getting more into the human dimension of these issues,” he said, “which sometimes is more difficult than the scientific aspects.”

“If we are not talking to these communities,” DiPasquale said, “there is not going to be anybody to pick up the baton when it is time to pass it.”

He also believes that the Bay Program must do a better job explaining how community actions to protect the Chesapeake can also address local issues, from creating jobs when installing green infrastructure to improving habitat in a nearby trout stream.

“We need to go beyond the science, and we need to start talking more in economic terms,” he said. “What are the co-benefits of the actions that we’re taking when we implement a best management practice?”

A new Bay Program director has not yet been selected. Jim Edward, who has been deputy director of the Bay Program, serves as acting director until a replacement is named. Whoever takes DiPasquale’s place will have plenty of challenges. The Trump administration continues to target the Bay Program for elimination, saying the task of such regional programs should be shifted to the states. Congress, so far, has maintained funding for the program, but the uncertainty caused several staffers to leave. Over the years, the EPA’s Bay staff, which once numbered 28, has been reduced by about a third, even as responsibilities have increased.

The relocation of Bay Program staff from their Annapolis office, which would move them away from other federal agencies and organizations working on Bay issues, is a looming possibility — something DiPasquale fears will hamper the partnership’s momentum and reduce citizen participation.

Looking back, DiPasquale is surprised by his longevity at the Bay Program. His tenure is exceeded only by Bill Matuszeski, who headed the program for nine years. DiPasquale may have stayed longer, but he was diagnosed with cancer last summer and underwent several rounds of chemotherapy, which has shown signs of success. But it contributed to his decision to retire. “If it wasn’t for the cancer, I think I would have stayed for at least another year,” he said.

Still, the Bay restoration remains part of his personal agenda. “I want to continue to be involved in Bay restoration activities in some form or fashion,” he said. “There are a lot of small organizations I wouldn’t mind hooking up with, just to help out.”

After reflecting on his tenure at the Bay Program, DiPasquale struggled to decide whether he is optimistic about the Bay’s future or not — his observations went back and forth between signs of hope and substantial challenges.

“There are signs that give me great optimism, and there are signs that lead me to be more pessimistic,” he said. Finally, he described his outlook as a 60/40 lean toward optimism. “I’m at the tipping point, just like the ecosystem — looking for some positive feedback.”