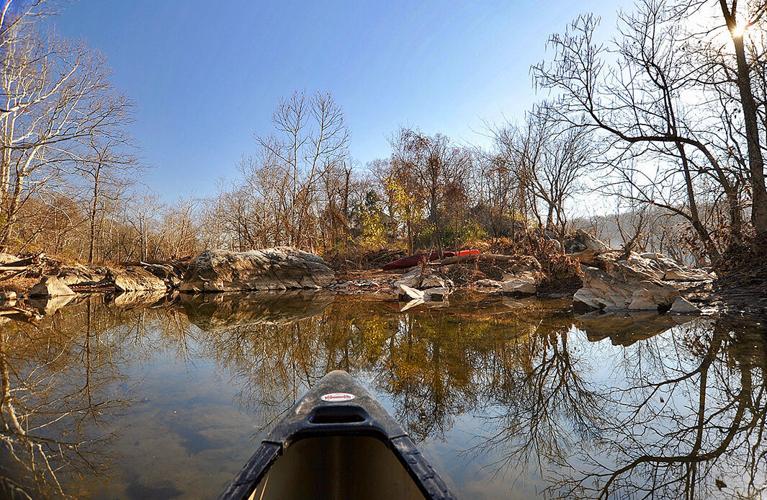 Minnie’s Island in the Potomac Riveris a 5-minute paddle from a launch near Lockhouse 8 on the C&O Canal Towpath. 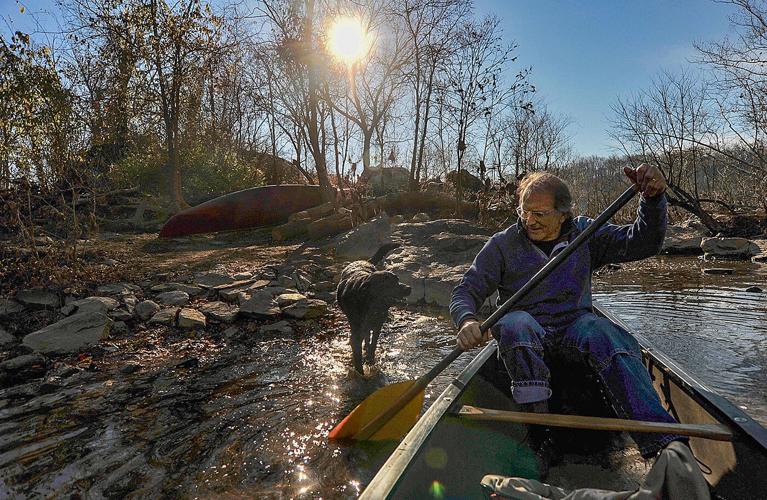 Pascal Pittman, pictured with his dog, Cayenne, began visiting Minnie’s Island in the Potomac River 25 years ago when his children were young. He is now director of the Minnie’s Island Community Conservancy. 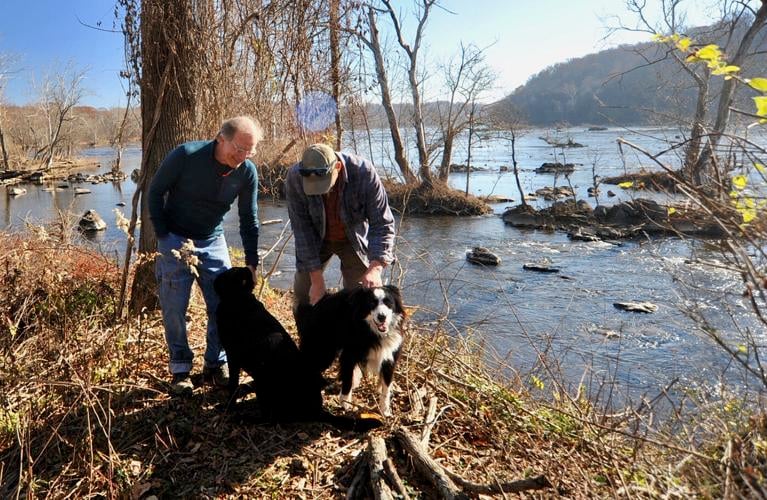 Pascal Pittman and Jack Mandel are among the community members from nearby Cabin John, MD, who created the Minnie’s Island Community Conservancy. 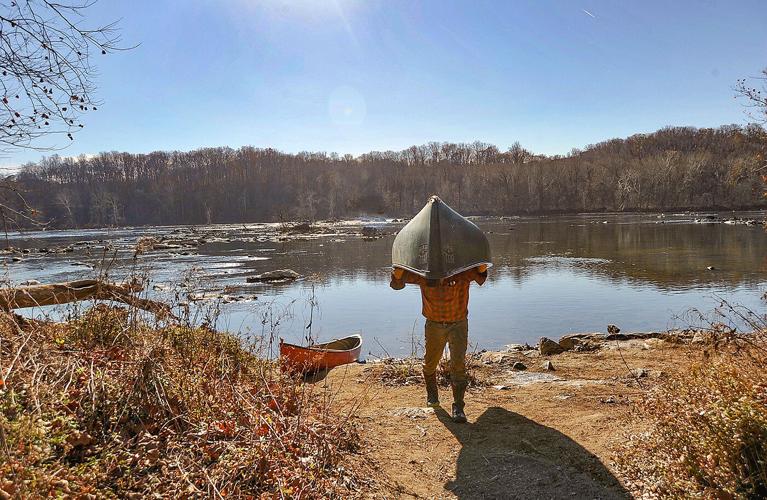 Jack Mandel prepares to paddle to Minnie’s Island on the Potomac River by carrying his canoe from a parking lot to the shoreline near Lockhouse 8 on the C&O Canal Towpath.

On a stretch of the Potomac River flanked by multimillion-dollar homes is an 8-acre island featuring a rustic cabin — and a lot of potential.

Until recently, its prospects were hidden beneath two decades of overgrowth. But a newly minted Minnie’s Island Community Conservancy has been unearthing its natural character and dreaming about its future.

“This place will be spankingly beautiful,” said Pascal Pittman, a 70-year-old architect with as much energy as his black Labrador sidekick, Cayenne, during a tour of the island on a sunny first day of December.

When Pittman, who lives in Cabin John, MD, started the local group less than a year ago, nonnative Japanese honeysuckle and oriental bittersweet had long since hidden the walking trails that once existed on the island. The trees were entangled in vines that were beginning to take over a 1940s era cabin, too.

Even before the group secured nonprofit status this year, the volunteer power of about 140 people had begun sprucing it up.

“The whole purpose of this is to maintain the island and the cabin, but, more importantly, to make it available,” Pittman said.

Technically, Minnie’s Island has been open to the public since 1994, when its owners gifted it to the Potomac Conservancy, which had been formed only one year earlier. In the years that followed, the conservancy hosted river cleanups and educational events at the site.

But in recent years, the nonprofit’s work has expanded beyond the Potomac’s shores in southern Montgomery County; it now encompasses clean water initiatives and policies for the entire river.

So, when Pittman reached out with an interest in creating a local group to care for the island, it seemed like a good fit. The Potomac Conservancy plans to transfer ownership of the land to the Minnie’s Island Community Conservancy early

Part of an archipelago, or string of islands, the land measures 8 acres on the deed, but less than 3.5 of those acres are above the water’s surface most of the time. The cabin straddles some of the large rocks that make up the island’s surface.

The high points of the island’s topography offer breathtaking views of the wide river, and its low-lying areas are strewn with shells left behind by high water, which also accounts for the rocky island’s ecology. On one cleanup day last year, volunteers discovered a rare plant — racemose goldenrod, listed as highly rare in Maryland — growing out of one of the rocks.

Many of the island’s other treasures are found in its storied past.

Minnie’s reportedly gets its name from Minnie M. Jenkins, who owned the island in the early 1900s. Jenkins owned an eatery in Great Falls, VA, and was rumored to have run a speakeasy off the island before her death at age 35. The island was sold in the 1920s to a zoologist who collected “spiders and other things,” some of which had never been identified, according to a 1994 Washington Post article.

A banker who took boys’ clubs to the island for outdoor adventures owned it next, and then came Henry Reuss, a Wisconsin congressman from the mid-1950s to the 1980s. Reuss’s son, Christopher, loved the island so much that he spent two years living in the cabin that had been built there in the 1940s — pumping water from a well, installing a wood stove for heat and canoeing to shore to work at a law office downtown.

Christopher Reuss died in 1986 in a kayaking accident at age 43, the Post article said. When the Reuss family donated the island to the Potomac Conservancy in 1994, they did so in his honor, commemorating it with a metal plaque nailed to an island rock.

Minnie’s Island is still a quiet, wild place today — but for the occasional air traffic — tucked inside an otherwise bustling Capital Beltway around Washington, DC. Visitors can launch their boats from a shoreline near Lockhouse 8 on the C&O Canal Towpath and paddle to Minnie’s in five minutes. Cayenne, Pittman’s dog, prefers to swim.

Pittman began frequenting the island 25 years ago when his three now-adult children were young. After architect work took him to Morocco, he returned to find the island in notably less visitor-friendly shape.

“I talked to my community and said, ‘Would you guys be interested in sort of adopting this island if we could make it work?’” Pittman said. “I got an enthusiastic response.”

Pittman’s effort picked up steam and co-conspirators during the pandemic, as people began to appreciate nearby natural spaces all the more. Jack Mandel, a neighbor who works in construction, was one of them.

“When we first came out here, you couldn’t walk 15 feet onto the island,” said Mandel. “We’ve got a toehold now.”

The group has a vision, too. Along with keeping the island open to anyone who wants to paddle or wade to its shores, they want the land to be a resource that gives back to those who have given much.

At the top of that list is making it a retreat for Team River Runner, a local nonprofit that organizes paddles for veterans, with adaptive options for wounded warriors. Other beneficiaries of the getaway space could be first responders, frontline workers and “folks at the lower end of the economic ladder, who don’t have a cabin to go spend the weekend at,” Pittman said.

Of course, having a comfortable place to sleep on the island will require a little more work. The 450-square-foot cabin with a large deck is structurally sound but has neither electricity nor running water. The group recently installed a new wood stove for heat, Future plans include solar panels, plumbing and a composting toilet. A 30-foot-deep well on the island looks like it could be resurrected, too, Mandel said.

“This is gonna be adorable, cute and charming when we’re done,” Mandel said, taking in the vista from the island. Then, referring to the former owner of the Washington Redskins football team, who once lived in a mansion overlooking the Potomac, “Dan Snyder’s got nothing on this view.”