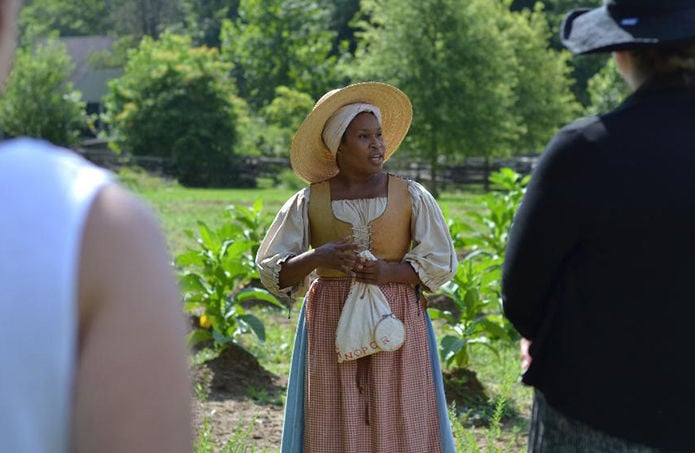 Shemika Berry, interpretation coordinator at the Accokeek Foundation, portrays a fictitious woman enslaved on a recreated colonial farm at Piscataway Park in Maryland. Her portrayal is part of an ongoing effort to highlight the variety of experiences and perspectives that have been connected to the site and its long history. (Courtesy of the Accokeek Foundation) 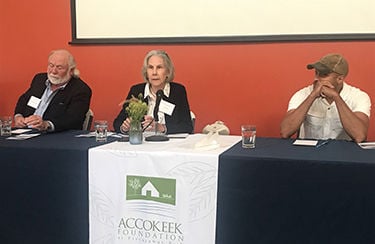 The Accokeek Foundation, which runs the recreated colonial farm at Piscataway Park, invited guests to discuss the complicated history of conservation during the first in a series of meetings on March 31. From left: Wilton Corkern, former president of the Accokeek Foundation; Julia King, an archaeologist and historic preservation expert; and Chris Newman, a farmer and member of the Choptico Band of Piscataway Indians. 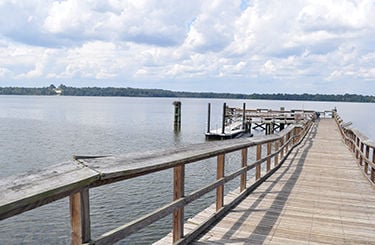 Piscataway Park, with its view of the Potomac River, was originally preserved to protect the tree-lined view from the opposite shore at Mount Vernon, George Washington's historic estate.

In the heavily wooded acres of Piscataway Park, on Maryland’s shore of the Potomac River, is a popular collection of cattle, sheep, hogs and plants — with breeds and varieties commonly found on local farms in the 1700s. Along with costumed interpreters, they bring to life a recreated colonial farm established there in 1958, complete with a farmhouse and tobacco barn.

But the colonial era story highlighted within the park’s 5,000 acres is only one layer in the long, complex history of the land and its people.

That’s why the Accokeek Foundation, the nonprofit group that runs the farm, wants to do more.

“We want to listen to the rhythm of the land and the river and listen to the various stories of the land,” said Gene Roberts, one of the nonprofit’s board members, during a conversation the foundation hosted on March 31.

The discussion about the “complicated story” of conservation was the first of three this spring that aim to incorporate a diversity of perspectives into the site’s interpretation.

“This series,” explained Shemika Berry, Accokeek’s interpretation coordinator, “is designed to honor the voices of those who were here on this land before us, and those who still live here.”

The Piscataway people inhabited the riverside area for thousands of years before the English explorer John Smith encountered them in the early 1600s. Their communities suffered violence and disruption as colonists came to control the landscape. Farms and plantations grew, — depending greatly on the work of enslaved people — and changed over time. In the 1700s, George Washington lived in the Mount Vernon mansion directly across the river. The land at Piscataway Park was preserved from development in the 1950s to protect the tree-lined view from that estate.

To only tell one slice of that history, said Accokeek Foundation president and CEO Laura Ford, is to miss an opportunity. But to do justice to each of the land’s past and present inhabitants — without taking visitors through a disorienting time warp — can be challenging.

“This landscape tells us a story of generations of change,” she said. Yes, Piscataway was the first national park set aside to preserve a historic vista, “but that’s only part of it. It also preserved the heart of the traditional homeland of the Piscataway people. It preserved a landscape that carries the stories of first contact [with European settlers] and colonization and the story of the evolution of agriculture against the backdrop of slavery, emancipation, Jim Crow, the civil rights movement and the American Indian movement.”

Ford said conversations like the ones they are offering help to inform future interpretations of the property, allowing caretakers to expand their perspective.

“It’s what’s driving our interpretive planning process, and that’s what’s going to get us to a place where we’re telling a different story,” she said, “a more authentic story of this landscape.”

Piscataway Park also includes the remains of former Piscataway Chief Turkey Tayac, whose burial at the national park site in 1979 required a permit from Congress, according to a Washington Post article.

Chris Newman, a farmer, software engineer and member of the Choptico Band of Piscataway Indians who opened up the March discussion, said the decision to pursue this community dialogue was a brave one. Land conservation, he said, can be “a fraught issue for indigenous people.”

“It can be tempting to stand up and say, ‘That land was stolen, and that, and that,’” he said. “But that doesn’t help a lot when it comes to a sensitive and nuanced discussion. Conservation means different things to different people. Where we are now is a place where we are finally starting to appreciate those perspectives.”

Many of the people in the room were residents of the Moyaone Reserve, a nearby residential community named after a historic Piscataway village site in the area. The community, comprised of mostly five-acre wooded lots and built around conservation values, is actually included within the boundaries of Piscataway Park, which is one of the few national parks with such an arrangement. Before the park was created, the community’s early residents worked to protect the land from industrial development, explained Wilton Corkern, an adviser to the Accokeek Foundation who served as its president for 22 years.

“Beginning in the 1950s and ‘60s, a small group of women and men, right here in Accokeek, changed the way Americans would think about land conservation for the next two generations and protected this from private development,” Corkern said, gesturing to some families in the room whose parents were a part of that early movement.

The conservation covenants they put in place to maintain a wooded community also protected the wooded, shoreline view from Mount Vernon. When the community became part of the national park, those covenants turned into federally held easements that require property owners to get National Park Service permission before felling large trees.

Many of the conservation-minded residents of the Moyaone Reserve remain active in efforts to protect the land and its surrounds from what they consider intrusive development. Last year, they worked with the Mount Vernon Ladies Association to convince Dominion Energy that an adjacent Charles County property was not the right place for the utility’s planned natural gas compressor station.

But the concept of conservation can be as complicated as this landscape, and the foundation wants the conversation series to point that out.

Newman explained that some modern approaches to conservation — which entail removing all people from the landscape so it can be protected from their urge to develop it — run afoul of the way indigenous people managed the landscape by cultivating it.

“These landscapes did not just happen by themselves. We were an integrative part of it,” he said. “These places are anthropogenic by nature. They were influenced by native people, by their hands, by fire, by wildlife that we directed into certain places, by cultivars that we encouraged to grow in certain places.”

Newman takes a similar approach today as he and his family manage a handful of historic lands as farmers and “permaculture developers,” working to produce food in concert with the surrounding ecosystems. To that end, they graze animals and plant perennials on 150 acres split between historic Stratford Hall in Montross, VA, and James Madison’s Montpelier near Orange, VA. He’s also working on projects with the Accokeek Foundation.

At these historic places and others, protecting colonial history was the impetus for preserving a landscape that modern caretakers realize might have a lot more stories to tell.

Julia King, an archaeologist and author of the book Archaeology, Narrative, and the Politics of the Past: The View from Southern Maryland, pointed out how often this property is defined by its role as the viewshed of Mount Vernon.

Newman said that narrow view only encourages visitors at both sites to see the land as it relates to the colonial story — at the expense of other narratives.

“Accokeek is, for me, about this place and just this place,” he said.

Roberts, the board member, said that the different narratives and time periods don’t necessarily have to be in competition or in concert.

“I think Accokeek has an opportunity to identify a number of those layers that it will interpret. And those layers are not necessarily going to agree with each other,” he said.

Accokeek is already working to move beyond the colonial narrative. Visitors who come to the colonial farm learn how the Bolton family — the fictitious residents of the farm — preserves food for a Maryland winter, and they can also talk to Cate Sharper, a fictitious enslaved woman interpreted by Berry, whose son was sold to another farm. They can visit her garden, planted with heirloom varieties, to get a glimpse into African American foodways and how “the dignity of labor [helped enslaved people] transcend unthinkable exploitation and hardship.”

“As the interpretation coordinator, it is my job to make sure we’re telling the stories of the people of this area respectfully and compassionately,” Berry said. “With the interpreters we have now and will have, we will be the faces and voices [to provide] that framework.”