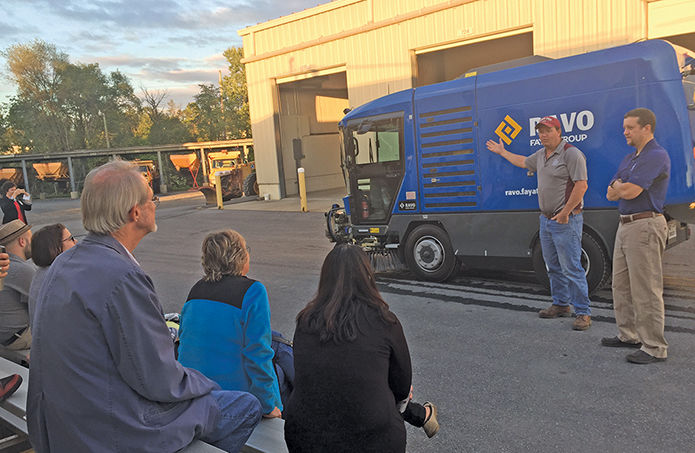 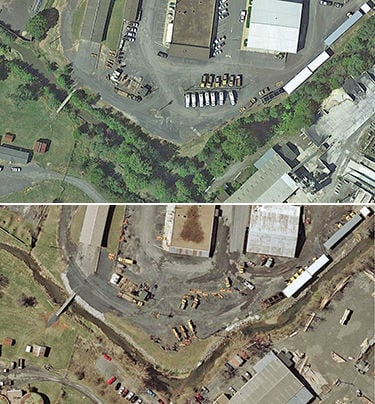 An aerial view from 2016 (top) shows the Harrisonburg public works yard after a stream buffer planting and multiple changes to equipment management and housekeeping were implemented in recent years the Harrisonburg. The bottom photo shows the yard in 2002. (Google Maps) 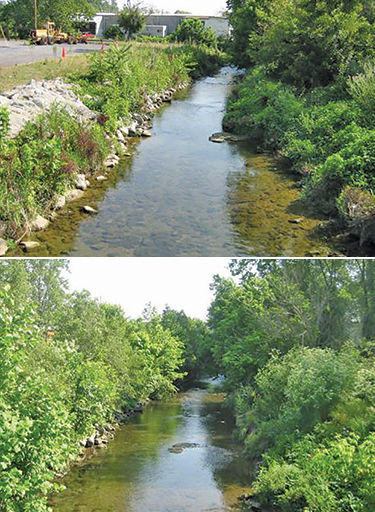 The vegetated stream buffer planted in 2002 (top) between the public works yard and Blacks Run had become a lush, effective buffer by 2016 (bottom). (City of Harrisonburg Public Works)

“Look here. A cigarette butt, and the receptacle is only two feet away!” He pulled his phone from his pocket and took a picture of the offending butt so close to a trash canister.

“I’m posting this picture in the crew area to let them know it’s not OK,” Sly said to his colleague, Kelley Junco, the city’s environmental compliance manager. “I’m always razzing the guys. I’ll pick on them, but I can get away it.”

This seemingly small gesture illustrates both the challenges and solutions in the department’s effort to prevent pollutants — grease and oil, hazardous material, salt, trash and even cigarette butts — from entering Blacks Run, which borders the property.

The public works staff in this Shenandoah Valley community is accustomed to plowing snow in the winter and paving streets when it’s warm. But all year long they are also well-versed in watershed protection: They operate the public works facility with a goal of preventing pollution before it is created.

The department’s use of “good housekeeping” practices for pollution prevention is one reason that the Chesapeake Stormwater Network named the 4-acre facility the “best industrial site” in its 2017 BUBBA contest — short for the Best Urban BMP (best management practice) in the Bay Award.

Junco and Sly’s teamwork that led to the award also helped to bring the facility successfully through its first audit by the U.S. Environmental Protection Agency in 2015. In the process, they created a watershed stewardship culture that not only prevents pollution from their facility, but travels with the work crews as they perform tasks throughout the city.

Harrisonburg’s public works yard, tucked between Blacks Run and the Norfolk Southern railroad tracks, is one of 2,500 permitted industrial stormwater sites in the Bay watershed. Altogether, those industrial sites total 40 square miles of impervious cover — such as parking lots and rooftops — and represent some of the dirtiest acres in the Chesapeake Bay watershed, according to Tom Schueler, director of the stormwater network.

The public works yard looks much different today than it did a decade ago. Much of that change was spurred when the EPA announced that it planned to audit the site to test the city’s compliance with its stormwater permit as part of the agency’s Municipal Separate Storm Sewer System (MS4) program.

The MS4 permit covers all kinds of stormwater discharges that occur from city streets — including construction and post-construction site runoff — as well as educating the public about the problem of trash in city streets and ensuring that there are no illicit discharges of paints and oils into waterways.

Under the permit, the public works facility and other city-owned properties and roadways are subject to inspections and audits of their stormwater control programs by the state and the EPA to see if they comply with permit requirements.

Junco said that preparation for the audit encouraged her and fellow managers to look more carefully at all the municipal sites for problems and solutions in advance of the two-day walkthrough with the inspectors. “The audit got us thinking more procedurally about how we do things,” Junco said.

As a result, the city came away with a few citations and a list of improvements to make, but no fine.

“We were already in the process of correcting or making plans to correct just about everything the EPA noted, and this gave us confidence we were headed in the right direction,” Junco said.

Starting with a good plan

As part of their preparation, the team developed a stormwater pollution prevention plan, or SWPPP, a document required for all high priority sites in the city. The plan includes a color-coded map, which provides a visual guide to the facility and all of its equipment, which is used for everything from spreading salt on the city’s roads to sucking trash and debris from storm drains.

The pollution prevention plan serves as a checklist to ensure that the salt, sand and asphalt stored on site don’t make their way into Blacks Run. The plan also helps to ensure that hydraulic and other hazardous fluids used to run city equipment stay out of the storm sewer inlets on their property.

With the plan in hand, Junco and Sly walk the entire site twice yearly — once in the fall before snow season and again in the spring. It’s a good way to observe potential problems, like telltale oil stains or a trail of sand that escaped from the stockpile.

As they tour the site, Junco and Sly also note any equipment that needs to be stored and any potential problems with site drainage, equipment and storage facilities. There’s a lot to examine.

During a recent walkthrough, Sly checked the line of salt spreaders parked 40 feet from Blacks Run. The spreaders were under cover, and a 6-foot wide strip of black absorbent material on the ground was ready to catch any spills.

Downspouts from the storage sheds are routed to heavily reinforced riprap channels to slow the water entering the stream. Two 500-gallon cisterns collect rainwater from the 10,000-square-foot vehicle storage rooftop; the water is reused to fill the street sweeping trucks, which saves money.

After the biannual tour, there’s a yard cleanup day. The entire public works staff — which numbers more than 100 — cleans and stores equipment, picks up trash, removes debris, ensures that runoff controls are being maintained and deals with any issues revealed by the walkthrough.

Junco said that their mission is grounded in the health and safety of the city and its employees. Snow and ice removal, traffic issues and flooding are the more obvious responsibilities, but protecting the environment is now an integral part of their jobs.

Their own street sweepers clean the whole yard daily. Impending storms require special attention to flush out their own pump house pits and storm drains. “We try to make changes that are reasonable and practical,” Junco said. “If you create a process that you’re asking the crew to implement, it will be more successful if it meets multiple objectives, like a pre-trip vehicle inspection that doubles as a maintenance check.”

This consistent staff involvement — ongoing inspections, education and training — is another reason that the department received the BUBBA award, said the Chesapeake Stormwater Network’s David Wood, who coordinates the contest judging.

Harrisonburg, like many cities, offers a “citizens academy,” a multiple week introduction to municipal functions, like police, fire and community development.

Luke Phillips, who is part of the storm drain-cleaning crew, said, “We teach them how we do our work. We even let them run the trucks.”

Because they work throughout the community, Phillips and his crew are the public face of the department and have come to understand the regulatory environment. “There are more strict guidelines — some could consider it an aggravation,” he said, “but I know it’s better for the fishing and better for our kids.”

Junco said that, at the citizens academy, she hears how the crews interact with the public. These days they are as comfortable as she is when it comes to explaining MS4s permits and the meaning of a watershed.

Schueler, of the Chesapeake Stormwater Network, said that kind of leadership is essential for the cultural change necessary for a successful program like Harrisonburg’s. “There’s this misconception that public works crews … don’t care about their jobs and don’t care about the environment,” Schueler said, but he’s seen a shift over the last decade. Public works employees understand much more about stormwater runoff and pollution, and the increasing complexities of managing it.

It’s still a work in progress, but Junco and Sly clearly share the responsibility and leadership necessary for this successful program. Just walking the yard together on a regular basis has cemented their working relationship and the program.

“When you start with simple, small, operational and process-based changes, you can get results,” Junco said.

For information about the BUBBA awards and Harrisonburg program, visit  chesapeakestormwater.net/the-bubbas/2017-bubbas-2/2017-best-industrial-site.