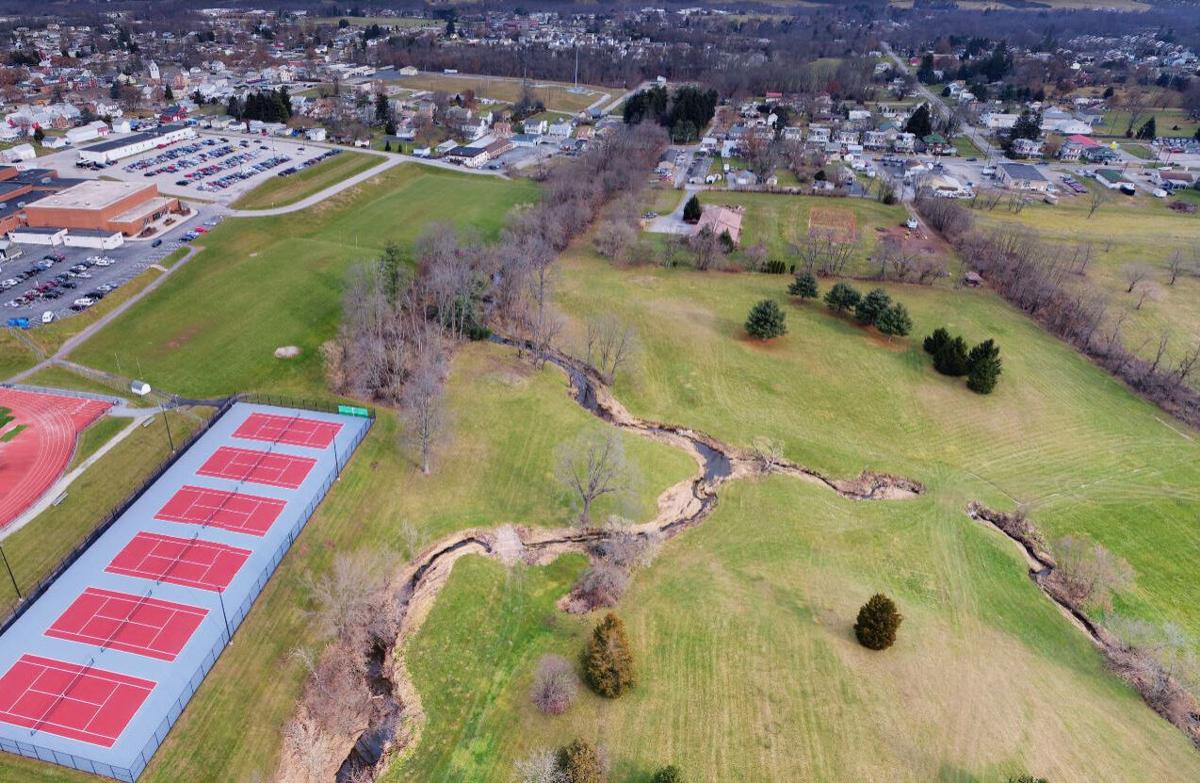 This drone photo shows the deeply eroding streams on a former golf course in Dover Township, PA. Officials got grants for stream restoration as a way to achieve the larger goal of building a 49-acre multi-use park. 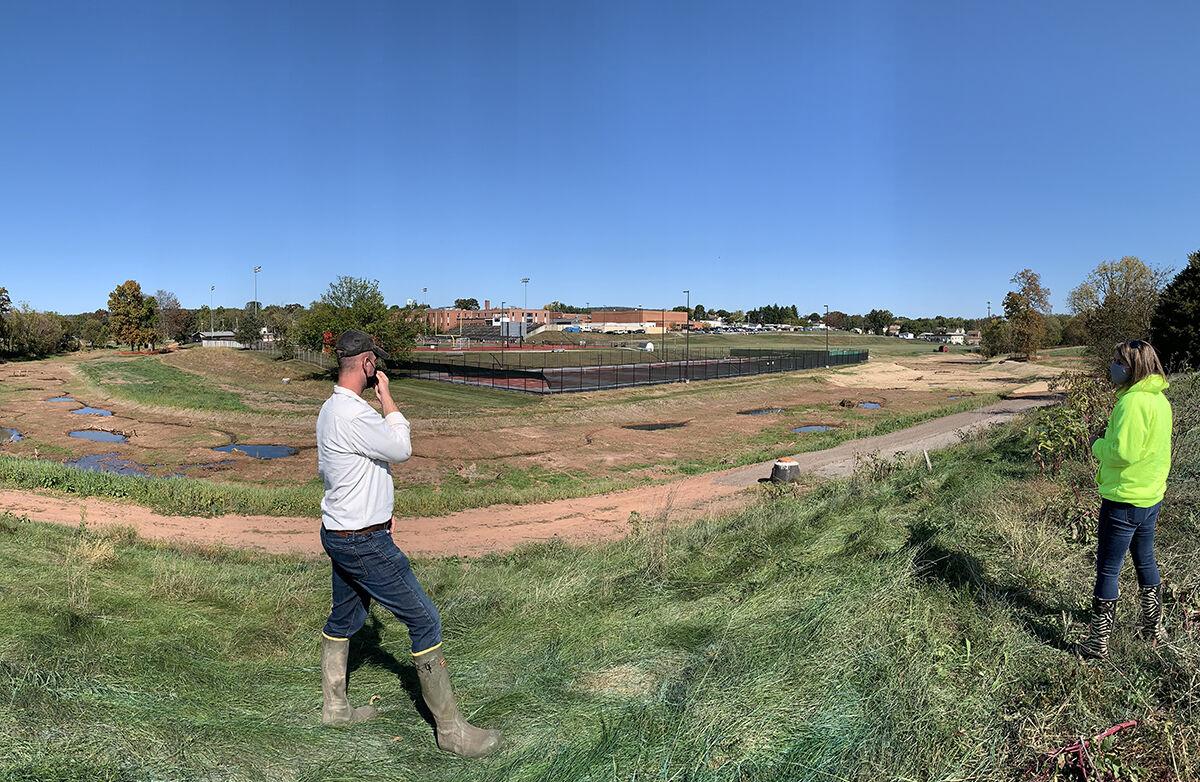 Reid Garner, left, of LandStudies, and Dover Township, PA, manager Laurel Oswalt look over a stream restoration where 27,000 cubic yards of “legacy” sediment was removed to reveal the original footprint and wetlands of two streams. Borough officials creatively used the floodplain restoration to get grants to form a multi-use park from a former golf course. 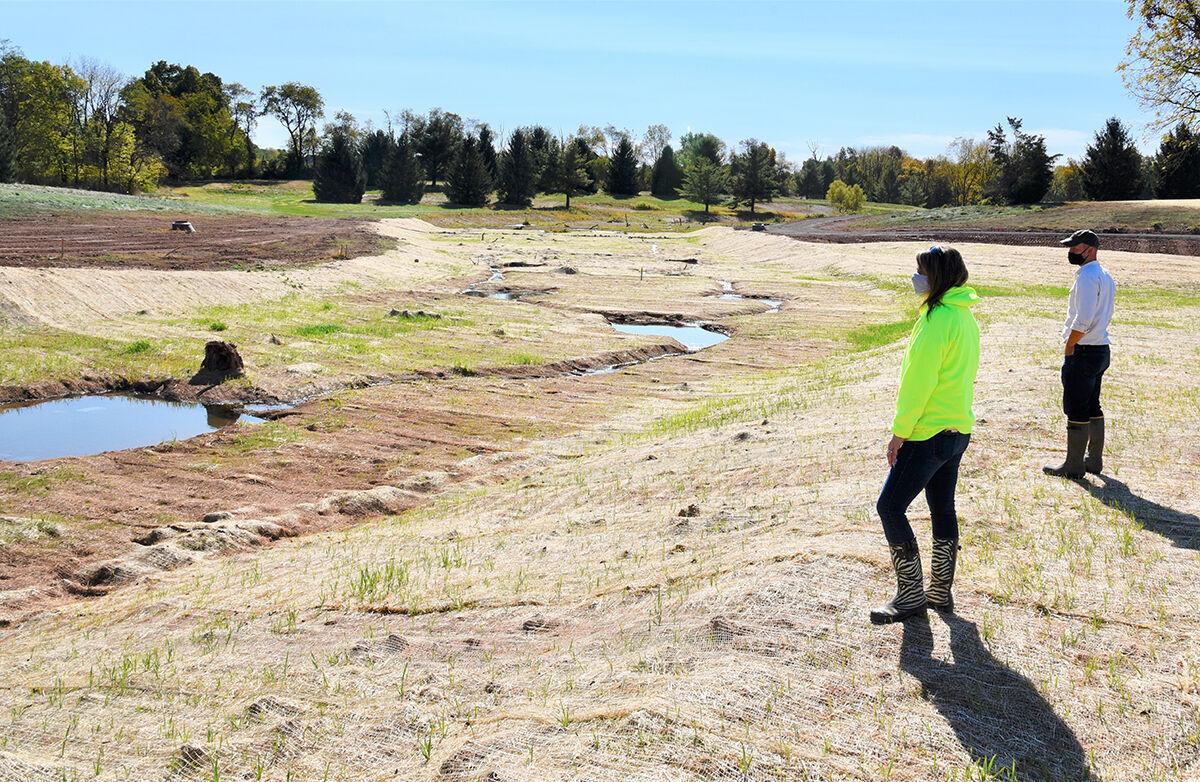 Laurel Oswalt, left, manager of Dover Township, PA, and Reid Garner of LandStudies look at a stream restoration that dug 4 to 6 feet down to recover the original course of two streams and wetlands.

Lori Yeich, who works at the Pennsylvania Department of Conservation and Natural Resources, remembers the day she got an anxious phone call from the public works director for Dover Township in southcentral Pennsylvania.

“We’ve got to move our playground, it keeps getting flooded,” Chalet Harris told Yeich.

Yeich, the agency’s manager of conservation and recreation — and a grants manager — was soon sitting down with Harris, sketching out dream ideas for what would become Eagle View Park: a new 49-acre park across the street from the floodprone site that would be built on a former golf course and driving range.

But it would take nearly 10 years of pitfalls, disappointments and creative thinking for local officials to get funding. The park, where work is still in progress, is large  enough for hiking and many other quality-of-life uses, from stream restoration and safe walking for students to a sledding hill and warming hut.

Officials in the farming and residential community of 22,000 in York County persevered despite facing several funding strikeouts and being second-guessed by a new slate of township supervisors who asked why a commercial property had been purchased for nearly $1.8 million with taxpayer funds. But now they are in solid support of the $1.6 million park creation.

The local officials’ dogged pursuit of funding and their success in packing so many uses into the park has led the state Department of Conservation and Natural Resources to highlight the project as a case study in the use of multiple strategies to secure money for recreation and conservation projects.

To cite one example, Dover officials were able to parlay an ambitious stream and floodplain restoration effort into obtaining funds for their main goal of recreation.

Here’s how they did it.

A park is born

Eagle View Park is on a former farm on the edge of Dover. Two days before the Battle of Gettysburg in 1863, Confederate General J.E.B. Stuart positioned cannons on rises there and trained them on the town, a show of potential devastation if supplies weren’t turned over to his army.

The undulating property’s last use was a small nine-hole golf course and driving range. Then it closed and went up for sale.

Township officials saw it as a perfect location for the growing community’s first sizable multi-use park. There were a few small parks in the township but even the largest, at 14 acres, was crammed with a senior center, library, fire company and community center.

There was nowhere residents could walk in nature. “A lot of the elements that are going into this park we don’t have in any of our other park locales,” Harris said. “And the township is growing. We needed a more regional-based park to cover people coming in as we grow.”

So, through a bond issue, the township purchased the golf course in 2011 and hired consultants to design a park that could serve the area’s many recreational needs. There will be a baseball field, ADA-certified paved trail and nearly 2 miles of scenic trails cut through meadows and along two restored streams.

There also will be an open-air amphitheater, splash pad and a place where teachers can hold environmental classes, then let students wade into the stream to sample water quality and look for bugs.

The park will be tied to the adjacent middle school campus via pedestrian bridges. It was designed with lighting and trails to encourage students to use the park as a safe shortcut between surrounding neighborhoods and several schools.

When the new high school was built across the road, it wiped out a hill where generations of township residents had sledded. Eagle View Park will not only have a sledding hill but a pavilion where sledders and their shivering parents can warm themselves by an open fire.

When a regional disc golf club approached the township, they were rewarded with an 18-hole, par three amateur course. Club members will help design and install the course.

Yeich praises the plan for its inclusion of uses. “The more you can connect people to a place, the more people will appreciate it and preserve it,” she said.

The park’s elements came together with the input of a committee that included the school district and residents.

A paved road will be built around the edge of the park to connect two major roads and encourage the commercial development of land beyond the park. And the floodplain restoration will handle stormwater needs from the area when developed.

“It’s really impressive to see a project of this scale come together where there are so many benefits for the township,” said Reid Garner, a water resource engineer for LandStudies, the firm that designed and partially built the stream and floodplain restoration.

Yeich lauds Dover Township officials for looking at the property holistically — not just to provide recreation but to heal it environmentally as well.

The single biggest element of the park project both in terms of money and earthmoving has nothing to do with recreation.

It’s about digging up 27,000 cubic yards of “legacy” sediment that backed up behind an old dam that powered a lumber mill and grist mill. Between 4 and 6 feet of soil were excavated to unearth the Colonial-era wetland soil that will restore the area as a working floodplain. That new ecosystem will capture and absorb floodwaters and improve water quality in two small streams that merge in the park.

Restoring almost 1 mile of waterways helps both the township and York County meet state stormwater runoff regulations and reduce erosion. It’s estimated that allowing the streams to return to their original footprint will stop 150,000 pounds of sediment, along with 1,500 pounds of nitrogen and 225 pounds of phosphorus —  two nutrients largely to blame for poor water quality in the region — from ending up in the Chesapeake Bay each year.

The excavation is complete, along with the planting of native trees and grasses as a streamside buffer. The riparian buffer extends from 60 to 200 feet on each side of the meandering streams to filter soil and harmful nutrients. The edges, where walkers will stroll along the streams, will be heavy with wildflowers.

Recreation enhancements to the park will begin later in 2021. The excavated soil was used to fill in low spots where the ballfield and other features will go, saving on soil disposal fees.

Combining those kinds of recreational features and environmental benefits is being pushed hard by Yeich’s agency and its parent regulatory agency, the state Department of Environmental Protection, because the state is struggling to meet goals to reduce harmful sediment and nutrients flowing into the Chesapeake Bay.

The township seized on the many uses of the park to try to get state funding for its project.

First, it sought an alternative transportation grant from the state Department of Transportation but was denied. Another state agency turned down a grant for the waterway improvements and greenways.

The township invested its own money for a park feasibility study and design plans even though it was uncertain if funding would follow.

The project’s potential to help meet countywide goals for controlling stormwater runoff, coupled with the township’s advance work to get the project “shovel-ready,” played a big part in hitting the jackpot.

In 2018, the township received a nearly $1.5 million grant from the state’s Growing Greener fund, a large pool of money set aside to restore watersheds, protect open space and preserve farms.

But the grant could be used only for restoring the floodplain, though the relocation of the sediment helped the park’s recreational footprint. No matter, the state Department of Conservation and Natural Resources, impressed with the floodplain and stormwater runoff work, followed with a matching $250,000 recreation, park and conservation grant.

Other grant decisions are still pending, along with a request to use a portion of York County’s hotel tax because the park may host an amateur disc golf national championship in the future.

“When it’s done, it’s going to be phenomenal,” Yeich said. “There are just certain projects that stand out, and it all stands out with a holistic vision of what the community wants to do in that landscape.”

And maybe it’s karma that a pair of bald eagles has turned up recently at Eagle View Park.