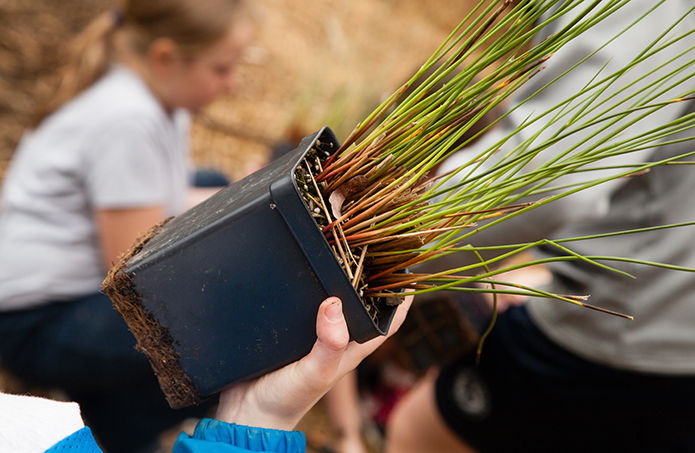 A suite of four models are used to estimate the amount of nutrients that enter the Bay and how management actions can reduce them. Step 1. Data from the Land Use Model and Airshed Model, along with other data such as human and farm animal populations, rainfall, septic systems and elevation, are entered into the Phase 6 Watershed Model. Step 2. Results of the Phase 6 Watershed Model are then entered into the Estuary Model. Step 3. The model results predict the types of impacts that result from various pollution reduction actions, helping planners to choose the practices best suited to their local situation. (Source: Chesapeake Bay Program) 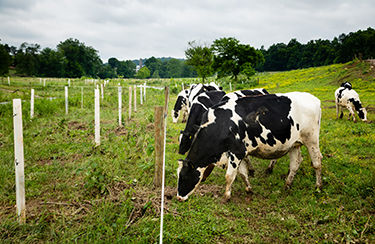 Dairy cows in Lancaster County, PA, graze near a fence designed to keep them out of Big Beaver Creek. Such projects are among the many best management practices that earn pollution reduction credits from the Chesapeake Bay Program.

It’s just six years until the Chesapeake region is supposed to reach its goals for the Bay cleanup. And a new round of draft plans is to be completed this spring showing how that will be accomplished.

These plans are to include local “planning targets” for pollution reductions, and local governments are to be involved in devising strategies to meet those efforts.

But no one knows how much it will cost to implement those plans, which has made local officials across the 64,000-square-mile Bay watershed understandably nervous.

“The cost estimates we have seen are in the billions,” members of the Chesapeake Bay Program’s Local Government Advisory Committee wrote in a letter to governors last summer.

There is nearly an infinite combination of actions that could successfully reach pollution reduction goals in a given area. Each would have different costs and environmental benefits, as well as the potential for additional benefits to the local community, such reducing floods or improving fish habitat.

Once, scoping out such options required making special requests to the state-federal Chesapeake Bay Program to run various scenarios on its computer models.

But a new, free online tool provided by the Bay Program — the Chesapeake Assessment Scenario Tool, or CAST — allows anyone to try their hand at running the Bay model and to weigh the costs and benefits of different approaches.

Importantly, CAST users will get the exact same answers as modeling experts — and assurance that the actions they take will count toward meeting Bay goals. “CAST is the Bay Model,” said Olivia Devereux, a consultant who helped to develop the system.

What is the Bay Model?

The “Bay Model” often seems to be cloaked behind a veil of secrecy, producing cleanup goals and rendering verdicts about whether state and local actions are making adequate progress.

In fact, there is not a single Bay model, but a suite of computer models that the Bay Program has developed, refined — and compared against real world observations — for a quarter century:

The models are a crucial component of Bay cleanup decision making.

Scientists have known for decades that the main water quality problem facing the Chesapeake is too many nutrients — nitrogen and phosphorus — along with an overload of sediment. The nutrients spur algae blooms that block sunlight needed by underwater grass beds and, when the algae die, they are decomposed in a process that removes oxygen from the water and causes “dead zones.” Meanwhile, sediment clouds the water and smothers bottom-dwelling creatures such as oysters, clams and mussels.

While monitoring can determine the amount of nutrients and sediment that enter the Bay and assess their impact, computer models are needed to predict how Bay water quality would respond to various management actions that reduce pollution.

These models were used in 2010 to determine the amount of  pollution reductions needed to meet water quality goals for the Bay, and those figures were used to establish the Bay’s “pollution diet” — officially called the Total Maximum Daily Load, or TMDL. Updated versions of the models led to refined goals last year; states and communities are now using those goals to write new watershed implementation plans that will guide cleanup efforts through 2025.

The Watershed Model is most pivotal in the development of those plans. It subdivides the 64,000-square-mile Bay watershed into thousands of smaller watershed segments, and for each it estimates the average amount of nutrients expected to wash off the land from dozens of types land uses, including different types of crops, forest, turf grass, roads and even categories such as “tree canopy over impervious surfaces.”

The Watershed Model also estimates the amount of nutrients that will reach the Bay from different geographic areas; generally, a greater proportion of nutrients are likely to reach the Chesapeake if they originate near major rivers or near the Bay itself, though factors such the underlying geology can also be important.

For decision makers, the Watershed Model is a critical tool because it is used to calculate the amount of nutrient reductions that would be achieved based on the implementation of scores of “best management practices.” A specific nutrient reduction credit is assigned to each BMP — from forest buffers to street sweeping — based on the recommendation of an expert panel that reviewed each practice.

By tracking the amount of BMPs implemented each year, and their associated pollution reductions, it is possible for the model to estimate progress toward meeting Bay goals.

Much of that modeling capability — and the ability to use it for planning — was historically out of reach for anyone except experienced computer modelers. But in 2011, after the pollution diet goals were released, Devereux and a colleague, Jessica Rigelman, developed a version of the Watershed Model that could help with local cleanup plans, though it did not always produce the exact same results.

When the Watershed Model was updated in recent years, though, it was redesigned and simplified so that anyone can use it. The result is CAST. With CAST, which operates on a website, users can take Bay cleanup planning into their own hands and determine what mix of actions best meets the local planning targets.

CAST users can play “what if” games to scope out alternate futures at the county or small watershed scale. They can, for instance, find out what would happen if they reduce impervious surface by a certain amount or plant buffers along a specified portion of their streams.

Of course, local planners will rely on a much larger mix of practices to meet their goals. And with more than 270 BMPs recognized by the Bay Program, there is an enormous number of combinations to choose from.

CAST, which includes state-specific information about the costs (and lifespan) of various BMPs, can help identify the most cost-effective options. For instance, it includes data showing that an agricultural forest buffer in Pennsylvania that treats runoff from 5 acres of farmland has a lifespan of 75 years and has an average annual cost of $157.35. A wet pond that treats 5 acres of developed land in Virginia has a lifespan of 50 years and costs $340 a year.

CAST can also identify “co-benefits” of BMPs. Reducing the amount of nutrients entering the Chesapeake may not be the most important environmental goal of a local community, but CAST can help local decision makers identify Bay-related actions that also provide local benefits — such as improving stream health, reducing floods or reducing toxic pollution.

By weighing such costs and benefits, it can help planners identify the best way for an area to reach local goals.

CAST is not only free but accessible to anyone conducting environmental planning, whether or not they are involved in the Bay cleanup.

“A lot of people have been using it for things not related to the Bay TMDL,” Devereux said. “I think we all get so caught up in the Bay TMDL that we forget there are a lot of environmental planning needs that local governments have to address. This can help.”

CAST is based on a website, cast.chesapeake.net, that includes not only the model but a variety of tutorials and webinars showing how to use it.

Even for people who never run CAST, the website serves as a one-stop shop for background information that can answer most questions related to implementing cleanup activities.

Along with volumes of detailed documentation about how the models work, users can find information about the effectiveness and cost of more than 270 best management practices that can be used to reduce pollution. The site also contains reports by experts who established the nutrient reduction credit for each BMP, so anyone who wonders, “Where did that number come from?” can go straight to the source.

For those who want more than model data, the site has links to actual water quality monitoring results and trends.

After they are installed, BMPs must be maintained if they are to continue to count toward Bay cleanup goals over time. The website has information about protocols for verifying that BMPs are being maintained and functioning — something officials may want to take into consideration when devising plans.