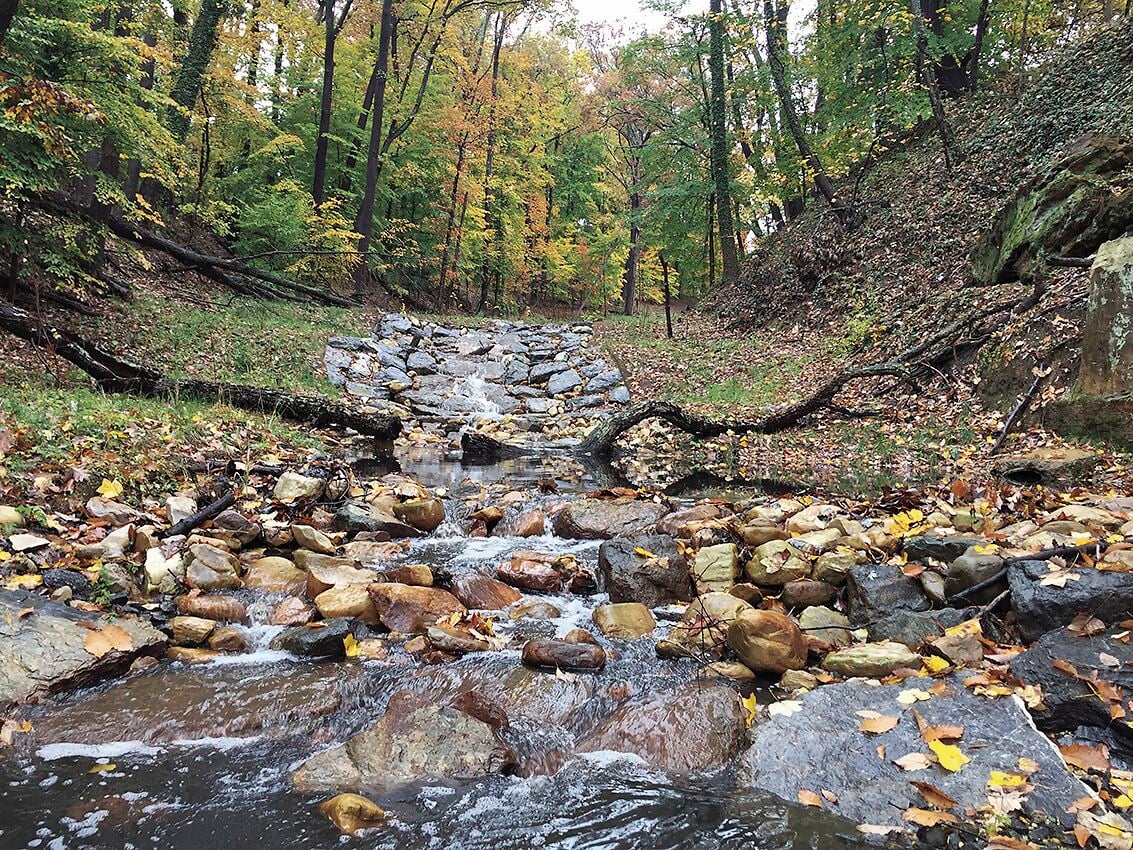 The lower section of the stream in the District of Columbia's Alger Park, after restoration. The design used channels with buried logs to control the grade, stabilize the floodplain and restore a braided flow pattern. Behind the installed riffles are a series of varying depth pools, surrounded by native wetland plants. (Courtesy of DC Department of Energy & Environment) 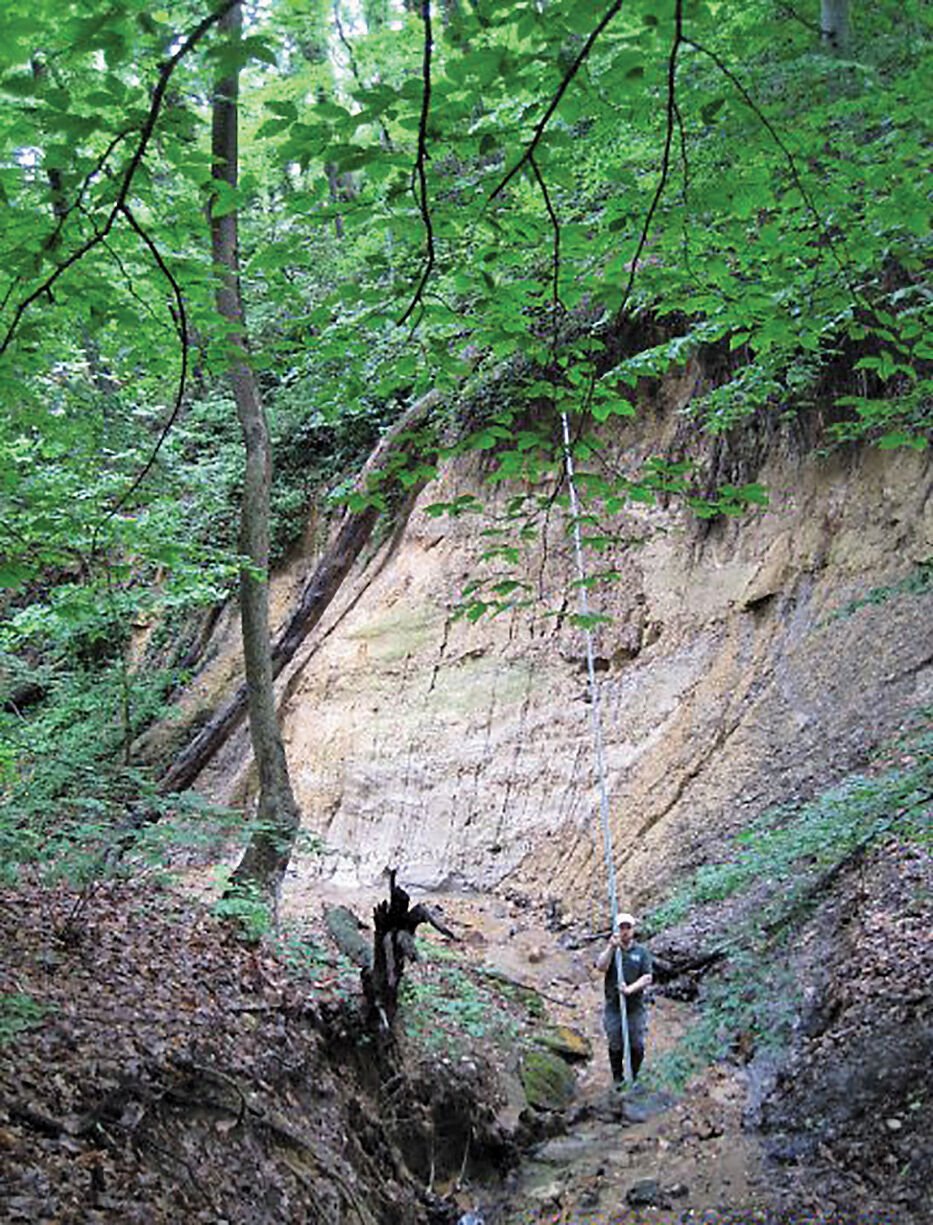 Intense stormwater runoff had gouged a deep ravine in parts of the unnamed stream that runs through Alger Park in the District of Columbia. (Courtesy of DC Department of Energy & Environment) 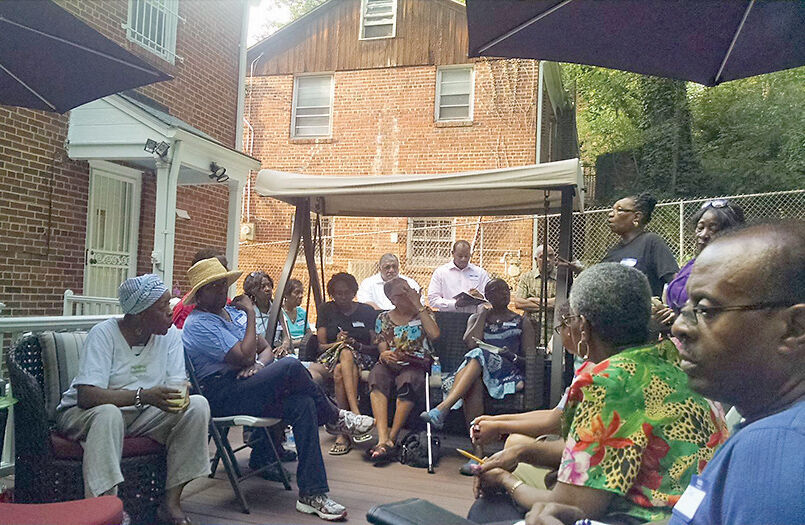 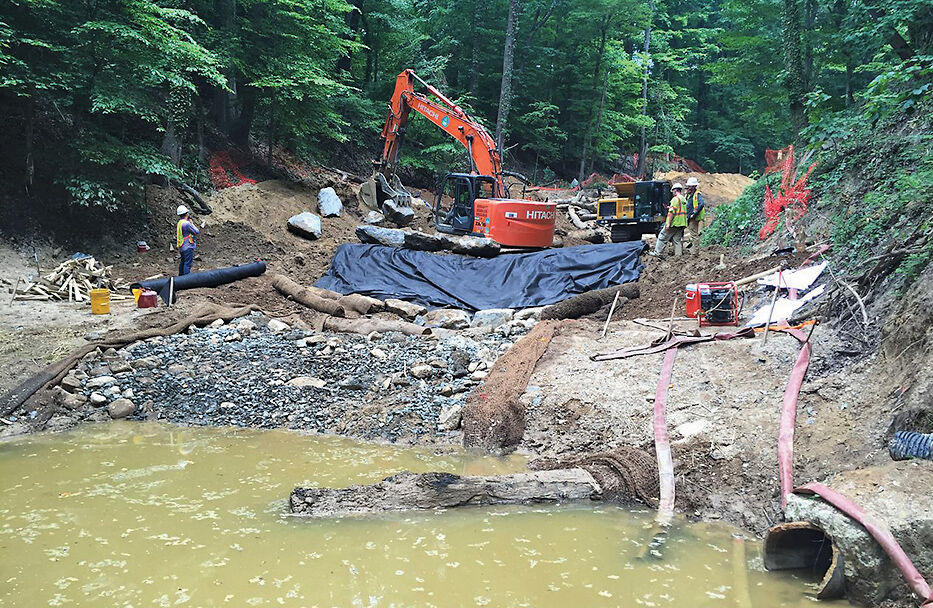 The lower section of the stream in the District of Columbia’s Alger Park was in need of restoration but had only a slight grade and more room to broaden the floodplain. (Courtesy of DC Department of Energy & Environment)

Residents of the District of Columbia’s Hillcrest neighborhood could hardly see the unnamed stream, tucked deep into a small forested park, through the trees. But some of them noticed what appeared to be a sinkhole and reported it to the District’s Department of Energy and Environment.

Turns out, it wasn’t a sink hole. It was a bigger problem: a stream whose banks were so incised by gushes of stormwater and erosion that it had backfilled with debris in one spot and, suddenly, emptied, leaving a hole. In 2019, the project that entailed work both in the streambed and throughout the small watershed won a Best Urban BMP in the Bay Award, or “BUBBA.” The prize recognizes innovators who are using creative best management practices (BMPs) to treat and control urban stormwater pollution in the Chesapeake Bay watershed.

“From a bank erosion perspective, it was the worst stream of any in the District,” said Josh Burch, a DOEE stream protection specialist who led a nearly eight-year restoration of this waterway.

The stream in the 32-acre Alger Park was likely once intermittent before the neighborhood around it was developed in the 1930s, ’40s and ’50s. But, over time, rainwater washing off paved surfaces was piped into the waterway via five stormwater outfalls. Those outfalls functioned “like fire hoses” during heavy storms, Burch said, blasting the dirt from stream banks and undercutting them until another inch or two sloughed off into the water below.

In some places, the stream looked more like a canyon, with dirt banks stretching approximately 60 feet above the streambed. The District realized there was no easy solution and in 2011 started a project to restore the Anacostia River tributary. It would take years to complete, engaging a series of contractors and, most importantly, the local community.

Burch, said that community involvement set this project apart. A woman who headed the neighborhood association’s committee on environment and beautification fielded concerns from her neighbors before conveying them to city government officials. Local residents attended community meetings throughout the project to keep informed about the work, and they seemed to accept the hubbub of construction that accompanied it.

“Everyone likes the idea of stream restoration, but there is a short-term impact during construction that’s not always pleasant,” Burch said. “It helps to have folks that are patient. This took us a long time to make all this happen.”

The stream restoration in Alger Park was more complicated than most. The District agency worked with local contractors Biohabitats, LimnoTech and Environmental Quality Resources to develop two different design approaches to restore the full length of the stream.

Banks along the upper half of the stream were extremely steep while the downstream portion of the stream had only a slight grade and more room to widen the floodplain. Surrounded by woods on both sides, the only way to reach the stream to work on it was via the stream itself.

So, in the upper portion, contractors drove their vehicles right into the steep ravine and spent two months adding sandy soil mix to fill in the gully, raising the base of the stream by about 20 feet.

“That was the deepest gorge we’ve had to fill, and in the most narrow site,” said Karly Epp, a project manager with Environmental Quality Resources.

The crew started from the top of the hill and worked their way down. One of the biggest challenges was keeping the sand where they’d put it when it a heavy rain hit the site. Piping high flows away from the newly deposited sand was difficult.

“A couple times, we had to go to the bottom end of the site and collect our sand,” Epp said.

Over time, the sand was covered with a stone and cobble mix to keep it in place. The banks were graded to provide a more gradual slope, then covered with soil stabilization matting and plants.

The downstream portion of the stream had only a slight grade, so natural materials like logs and wetland plants were used to slow the water and help remove nutrients.

A series of pools and riffles were also created to provide room for wildlife habitat, of which there had been very little previously.

In all, more than 4,000 native plants and nearly 400 trees were planted in the stream corridor.

Healing urban streams requires more than repairing the stream channel itself. The Alger Park project tried to address that by taking the restorative work to the nearby streets and homes.

District officials “knocked on every door in the watershed multiple times,” the award application stated, inviting locals to help with cleanup projects in the stream and educating them about funding for stormwater projects on their properties. Through the District’s RiverSmart Homes and other programs that engage residents in reducing stormwater pollution, the DOEE was able to install 29 rain barrels and seven rain gardens on private properties that drain into the Alger Park stream.

The District Department of Transportation also helped to replace about 200,000 square feet of hardened surfaces with “low-impact development” projects in the watershed. These included permeable pavers that allow water infiltration and 29 small bioretention areas that capture and slowly release water.

“What makes the District different, and at times fun to work for, is that we’re trying to do it all when it comes to watershed restoration,” Burch said. Rather than working on a stream in isolation, all of these efforts together “help residents see how what they do on their property helps the stream below.”

Burch said the collaborative spirit that aided the Alger Park project can be rare. Even if residents are convinced stream restoration would be beneficial, they often don’t appreciate construction occurring in their backyards.

“I understand that,” Burch said. “But, sadly, we’ve created a condition where we have to protect these local waterbodies because we’ve ignored the health of our streams for too long.”

The District is conducting long-term monitoring of the Alger Park stream to measure improvements in pollution reduction. But, so far, the stream and its surroundings have stayed put, despite heavy rains. It even survived 2018, the wettest year on record in DC, before all of the upland work to reduce stormwater was in place.

Though no formal trails wind through the park, residents — now with more reasons to linger by the trickling stream — have formed their own little footpath.

I'm interested in the total change in elevation from the original top of the stream to the lowest part.

I will have to circle back to the sources to ask that question; it's a good one.