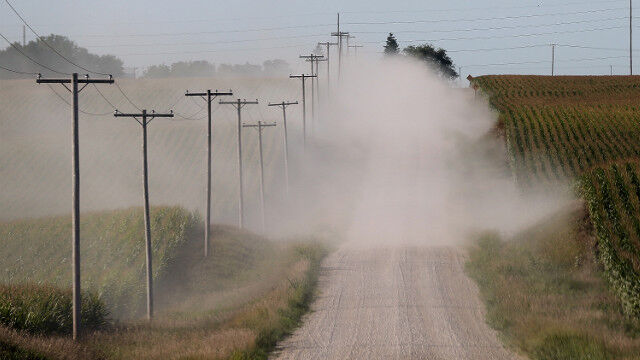 A vehicle kicks up dust on a rural dirt road in Pennsylvania. Dust inhalation is a serious health problem in the U.S. Oil and gas well producers are fighting environmentalists in the state over using wastewater from conventional oil and gas wells to suppress dust and melt ice on thousands of miles of dirt roads. 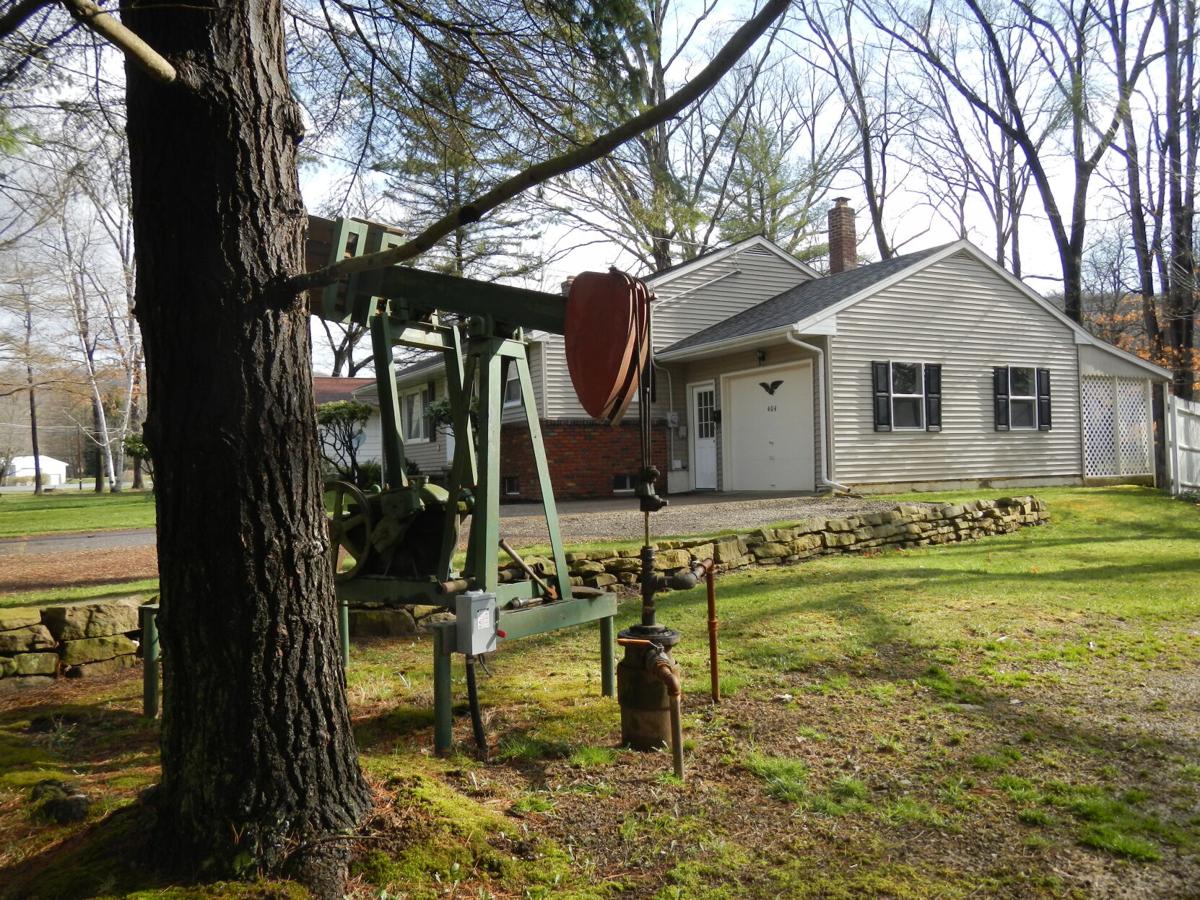 A conventional natural gas well operates near a home in Pennsylvania. Wastewater from such wells, heavy with salt and sometimes radioactivity, has been used for decades to suppress dust and fight ice on rural dirt roads until it was banned in 2018. 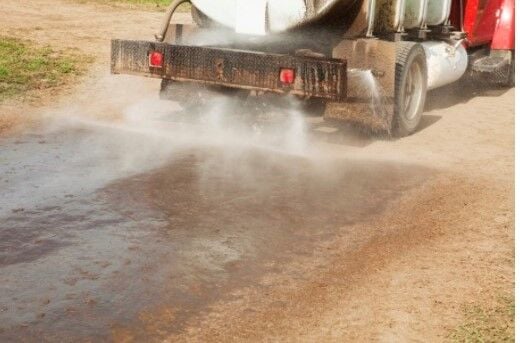 A truck spreads free wastewater from a conventional oil or gas well on a rural road in Pennsylvania before the practice was halted in 2018.

The debate over whether to again allow briny, sometimes radioactive, wastewater pumped from conventional oil and gas wells to be spread on Pennsylvania’s dirt roads has become as salty and charged as the material itself.

For more than a half-century, the water used to pump oil and gas from the ground has been a savior for rural road managers, with hundreds of millions of gallons spread for free on thousands of miles of back roads to suppress dust in summer and prevent icing in the winter.

A legal challenge led the state to ban the practice in 2018. But now environmentalists are squaring off with drillers and some legislators as the state determines whether or not it should resume.

Approximately 240 million gallons of drilling wastewater were spread on Pennsylvania roads from 1991–2017, according to records, though the practice started before that. Twenty-one of the state’s 67 counties, mainly in northwestern parts of the state, have used the water.

Drillers point out that unpaved roads are the largest source of unhealthy particulate pollution in the country and that dust can settle up to 500 feet from the road edge, slowing growth on crops and yields.

Breathing dust also can cause respiratory and heart problems and is a significant health hazard around the United States.

The drilling industry thought it was making headway — a bill to allow road spreading passed the state House in May — until a study by Penn State scientists released in August found that the drilling wastewater spread on western Pennsylvania roads was at least three times less effective than commercial alternatives and can actually damage the dirt roads.

Also, the salty water is laden with lead, arsenic and other pollutants, and it easily washes off roads into nearby streams and sometimes lingers in the air, the study found. Researchers also measured levels of radium, a naturally occurring radioactive element and carcinogen, and found it at levels higher than regulatory health standards allow.

Salt in the wastewater becomes mobile and travels into surface and groundwater, which the study says “has negative consequences for agriculture, infrastructure [roads] and aquatic life.”

“Road spreading of [wastewater] is an established practice that is generating health and efficacy concerns as the practice gains more attention,” the study concluded.

Among those involved in the study was a researcher from the Penn State Center for Dirt and Gravel Road Studies. That group called applying oil and gas wastewater on dirt roads “an environmentally unsound practice.”

The study results were part of a larger, still unfinished, study in which the DEP had hired Penn State to take a comprehensive look at any environmental effects from road spreading.

Oil and gas industry leaders accused the DEP of bias and said the industry’s own studies should have been considered but were not. They also criticized the study for testing the wastewater in a laboratory instead of real-life conditions.

The study “was done to reach an anti fossil-fuel outcome,” said Arthur Stewart, secretary of the Pennsylvania Grade Crude Oil Coalition and owner of a family business that has 2,000 oil and gas wells. “I am tired of lazy academic work that purports to be science, but it’s not good science because it’s not done in context.”

“As a Penn State alum, I am dismissive of a study that is created in a vacuum for political purposes,” said Joe C. Thompson, vice president of drilling and operations for Devonian Resources, a family-owned business that has conventional gas wells.

“If it’s up to [DEP], I don’t think they are going to do anything because of the public outcry from environmentalists. We know the contents of our water, and we have a pretty good idea what kind of environmental impact [it] has on our waters. And it’s negligible.”

The industry points to two former DEP studies that found no serious environmental harms or unhealthy radioactivity in well wastewater.

In 1996, the DEP studied the road spreading practice for dust control and concluded that, although there is potential for the wastewater to run off roads and pollute groundwater and surface water, runoff can be controlled by reducing the maximum spreading rates.

In 2016, the DEP addressed concerns over naturally occurring radioactive materials pumped up from the ground and spread in wastewater on dirt roads. After a study of treated roads, the DEP concluded there was “limited potential” from people hiking or biking on the roads to be affected by radiation exposure. But the study recommended further review of radiological environmental impacts.

Even before the Penn State study was released, environmental groups in the state were joining forces to keep wastewater road “dumping” from being allowed again. Eighty-one organizations delivered a letter to the General Assembly, urging them to defeat the two current bills in the legislature that would again allow the practice.

At a September meeting of the DEP’s Oil and Gas Technical Advisory Board, Justin Wasser of the Earthworks environmental group said that the wastewater is hazardous, potentially radioactive and should be treated as hazardous waste. “The reason we are back to reconsidering road spreading has nothing to do with science or what is in the best interests of the public. It has everything to do with the politics around an industry so they can pocket money and keep operating,” he said.

While some oil and gas industry leaders are convinced the DEP is predisposed to permanently ban road spreading, some environmental groups think the agency wants to bring back the practice and is fishing for evidence to support it.

“The fact is we don’t need another study,” said Karen Feridun of Berks Gas Truth at the same meeting. She said the DEP was “shopping for data to support a decision DEP has already made.”

The DEP insists it is not leaning in either direction and will look at all the evidence, past and present. “We will consider the totality of all the information [about] whether or not it is appropriate to develop a beneficial use permit to use oil and gas [wastewater] brines at all,” said Scott Perry, the DEP’s associate director of the Office of Oil and Gas Management.

However, an undetermined amount of wastewater continues to be spread on roads through a DEP regulation that allows the practice if the water’s physical and chemical constituents are similar to commercial products. The DEP allows drilling companies to make that determination.

But facing pressure, the DEP announced in October that it is reviewing the chemical makeup of wastewater from 17 oil and gas drilling operators who have been spreading material under that allowance.

Dave Hess, a former DEP secretary who has been outspoken in his opposition to road spreading, said that the practice continues illegally in remote townships, despite the ban.

The DEP asks anyone who sees wastewater being spread illegally to call 866-255-5158.