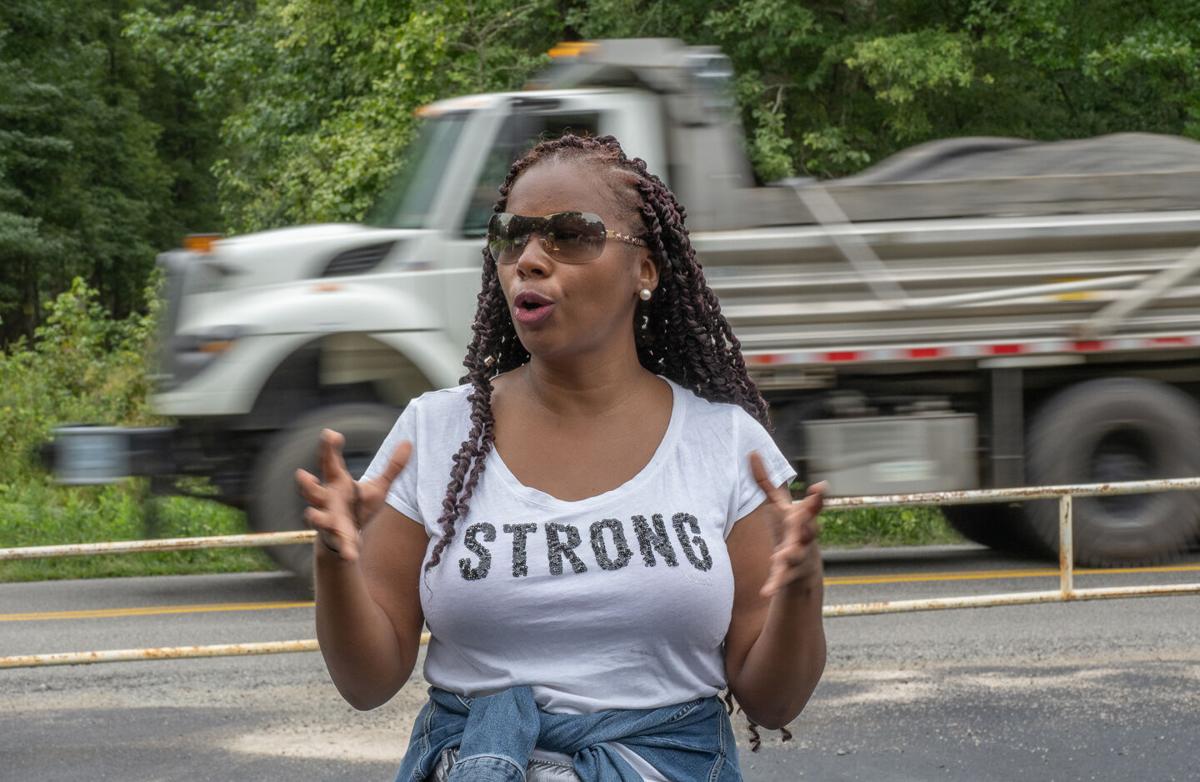 “In the past, we have been the community of least resistance,” said Renada Harris, who grew up in Brown Grove, VA. She is related to most members of the Brown Grove Preservation Group, which formed over concerns about a Wegmans distribution center proposed for the property behind her. Two industrial facilities are already located in the community. 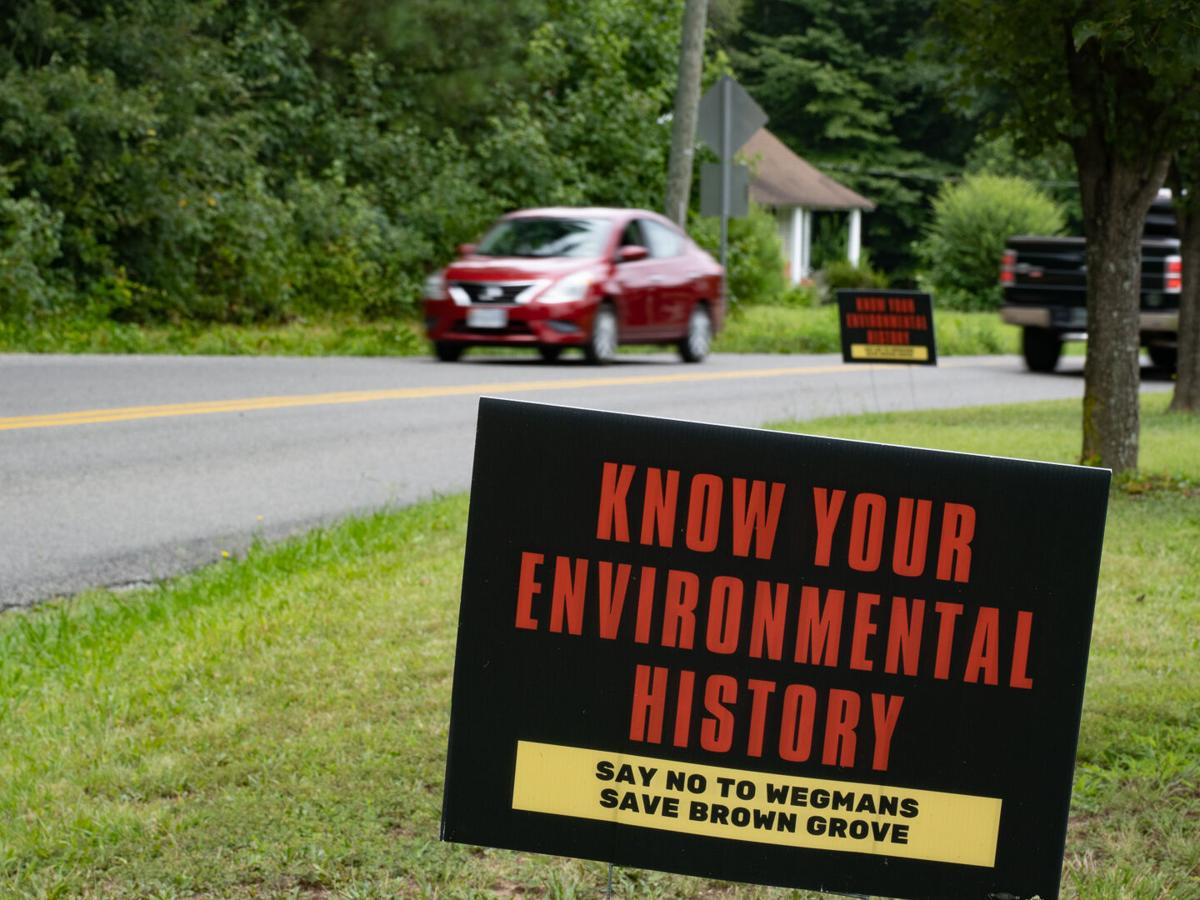 A sign along Ashcake Road in Brown Grove, VA, asks passersby to consider the history of the community as part of a protest against a 1.1 million-square-foot distribution center being planned for 217 acres nearby. 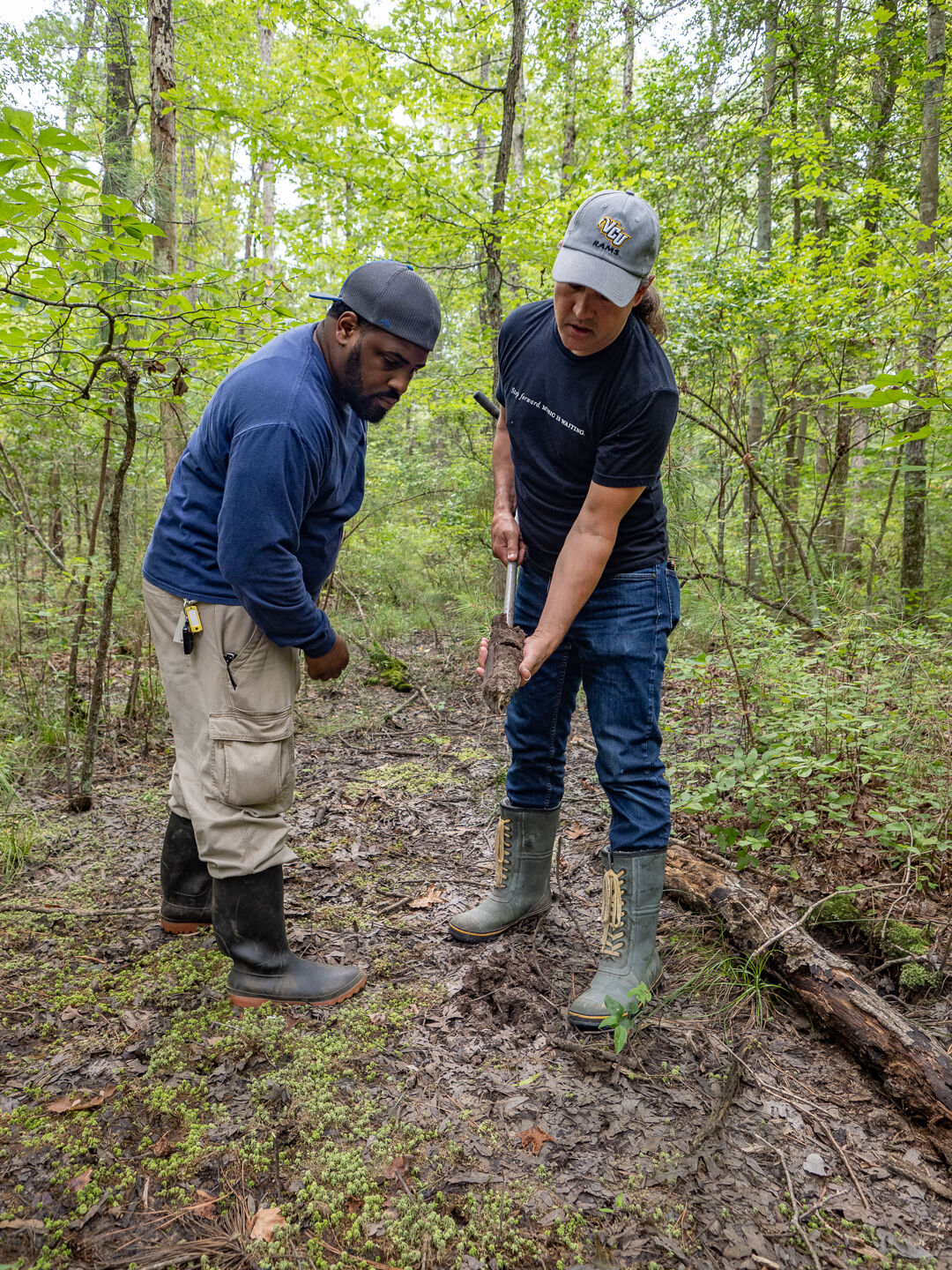 Alonzo Dendy and Chris French (left to right) bring up soils that are indicative of wetlands on a property that abuts the one owned by Wegmans in Hanover County, VA. They are among those concerned about the project’s impact on wetlands, which were initially under-counted on the property. 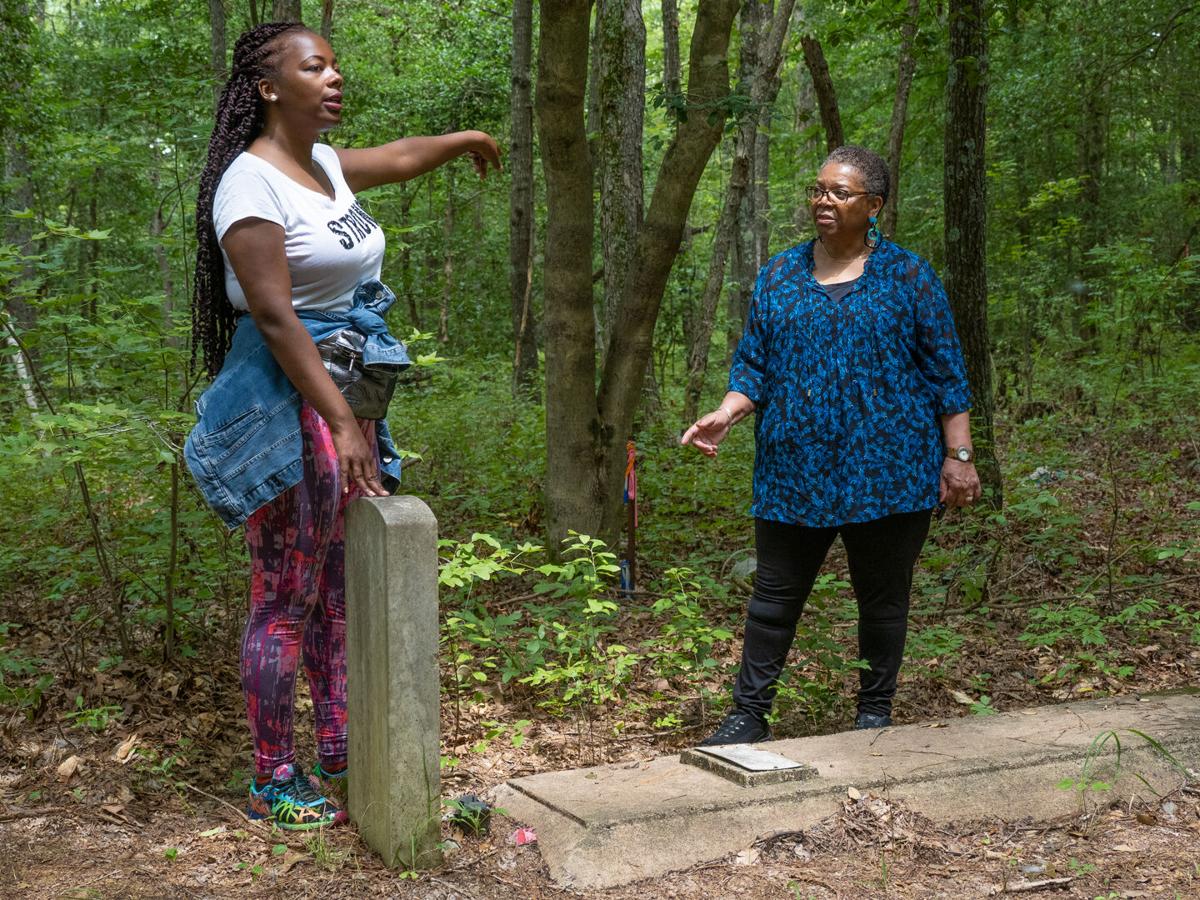 Renada Harris and Diane Smith Drake stand at a Morris family grave in a small cemetery on property adjacent to the site of a proposed Wegmans distribution center. “We suspect that there are more graves back there,” Harris said of the project site. 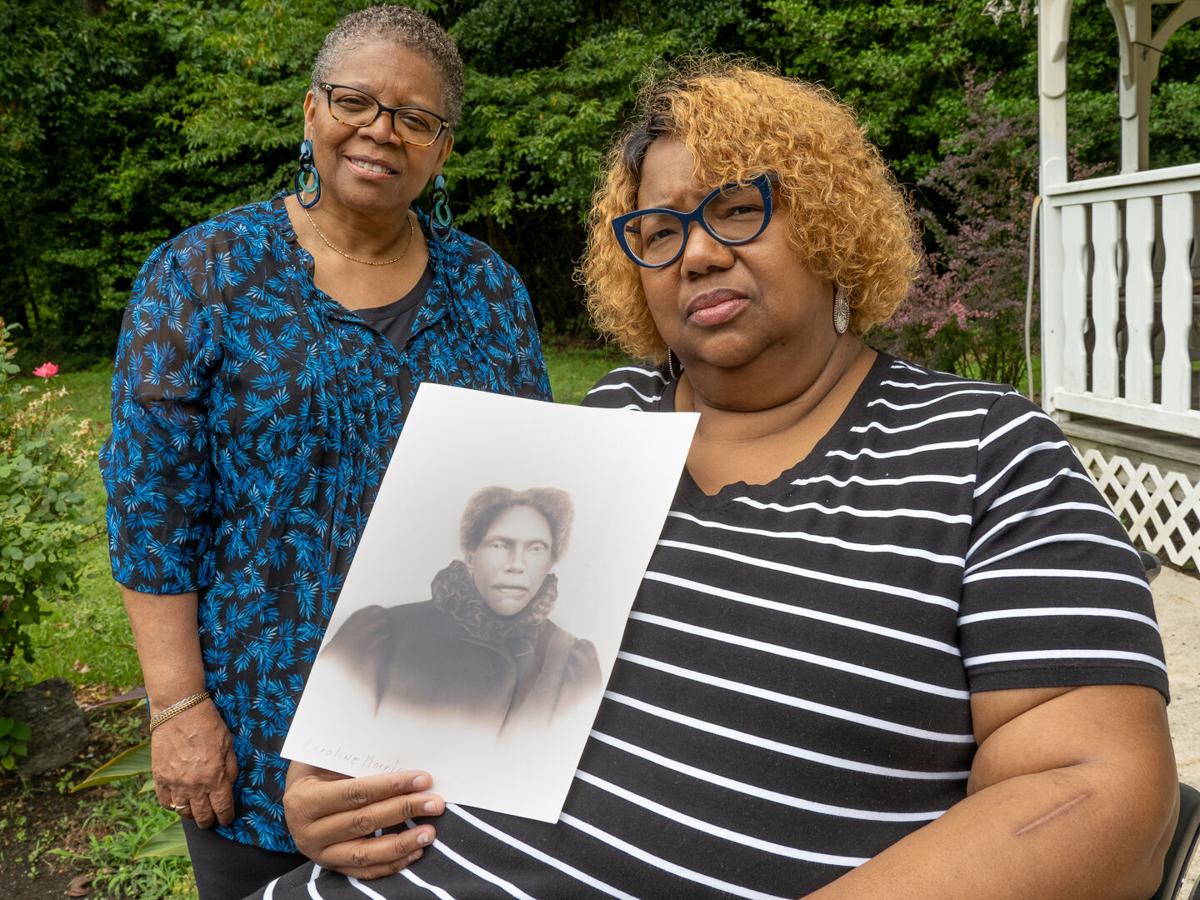 Diane Smith Drake and Bonnica Cotman, cousins, show a photograph of Caroline Dobson Morris, their great great grandmother who was freed from slavery and known as the “mother of Brown Grove.” The descendants of Morris’ 13 children make up much of the Brown Grove community today.

Opponents of a sprawling Wegmans distribution center slated for Hanover County, VA, say new developments underline their concerns about the project, even as it recently gained a key federal permit.

Plans for the $175 million distribution center to serve the growing grocery brand’s East Coast stores were announced in late 2019. The complex is slated for a 217-acre property that, while near a regional airport, has been forested and relatively untouched for decades.

The surrounding area is also home to a community founded by freedmen and freedwomen after the Civil War. And Brown Grove, with about 200 homes on rural, wooded lots already has a landfill and a concrete plant, raising environmental justice concerns about another industrial-scale facility.

“In the past, we have been the community of least resistance,” said Renada Harris, who grew up in Brown Grove and is related to most members of the Brown Grove Preservation Group that formed over concerns about the project. “But now, we’re learning to fight back.”

Despite growing public opposition, the county, state and federal government have granted the project almost all of the permits needed to begin construction. But new air pollution concerns associated with backup generators, along with a new historic designation for the surrounding community, could complicate those approvals.

On June 17, the state issued a historic designation to the entire Brown Grove community after recognizing the Brown Grove Baptist Church as historic in February. The most recent nod gives more defined boundary lines to the community and includes two historic churches, grave sites and the remains of the 1927 Brown Grove School.

The original environmental justice screenings for the project were based on a census tract that includes a larger, more economically and racially diverse area than Brown Grove alone. Advocates say outlining this specific community could have made a difference at the outset even if it may be too late to have an impact now.

On the same day in June, the U.S. Army Corps of Engineers granted Wegmans a permit to impact nearly 15 acres of wetlands, clearing what appeared to be the project’s last permitting hurdle.

The permit also details in a memo how developers should handle several archaeological resources located at the site, including remnants of the school, a 1700s dwelling and the potential findings of human remains from unmarked graves.

At a property owned by her grandparents in Brown Grove, Harris recently walked with her relatives Diane Smith Drake and Alonzo Dendy to a plot with a few dozen graves marked by headstones. The family members explained how they almost all descended from an early resident of Brown Grove named Caroline Morris, pointing out a back corner of the plot where the Morris name first appears on headstones.

“All these graves here are mothers and daughters and fathers buried together,” Harris said. Then, gesturing to a Morris headstone that stands on its own near the edge, “We suspect that there are more graves back there.”

On another property that abuts the Wegmans land, Chris French, environmental justice chair for the Hanover County NAACP, pointed out soils with characteristics he says are signatures of wetland soils. He and others have asserted throughout the process that the corps did not properly tally the amount of wetlands that will be impacted by the construction.

French also contested technical aspects of the corps’ decision to issue the wetlands permit, which happened at the same time that the corps released the results of a federal study to determine whether the project would have a significant environmental impact. That environmental assessment is required by the National Environmental Policy Act and is intended to inform the permitting process.

“With them releasing it simultaneously, there’s a significant question as to whether they followed adequate protocols according to law,” said French, adding that “all legal options” are being considered.

A Wegmans spokesperson has not yet responded to an email requesting comment.

The Hanover County NAACP is among groups suing over the State Water Control Board’s decision to approve permits for the project, which would impact more acres of wetlands than originally anticipated.

And the project’s final site plan approved in July raised new concerns about previously undisclosed aspects of the project that could contribute to air pollution.

The final site plan, approved by Hanover County in July, made room for 3–5 emergency diesel generators that had not been included in the original concept plan. The generators, which emit pollutants when running, require an air pollution permit from the state.

French said these generators were news to him when a colleague spotted them on the approved plans in July. He said they should have been considered as part of the federal environmental review process.

“Something as large as five tractor-trailer-size emergency generators … is a substantial deviation from the concept plan,” French said.

County officials wrote in an update to their website on July 16 that, while “neither the compactor nor the generators were shown on the conceptual plan approved by the Board of Supervisors,” such “ancillary equipment … [is] not typically shown on a conceptual plan at the time of zoning. Those details are usually included in the site plan.”

The update also said that Wegmans only plans to use three generators during the initial phase of development and no more than one additional generator at full buildout.

Hanover County wrote on its website that staff already required modifications to an earlier site plan that would have placed the generators along Sliding Hill Road to move them to a “location more central to the project.” The generators also would need to fall under noise ordinances and be limited to running for maintenance purposes during evening and overnight hours, the county stated.

David Paylor, director of the Virginia Department of Environmental Quality, which would issue the air permit, wrote in an email to French on July 13 that his department had not yet seen an air permit application from Wegmans for the project’s generators. The permitting process would address concerns about how often the generators would run, emitting pollutants that could impact human health and the environment.

“Members of Brown Grove will be the most impacted,” French said. So far, he said, “no one has bothered to look at the real impacts.”