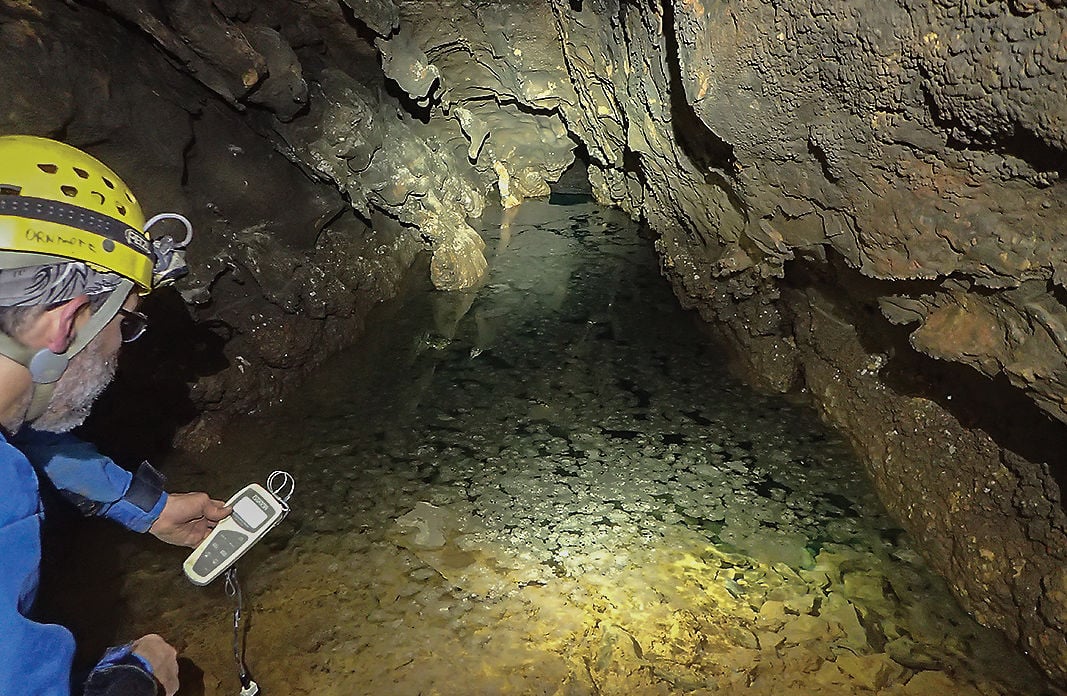 Passages in Madisons Cave provide windows into the karst aquifer of Virginia’s Shenandoah Valley. The mineral calcite, or calcium carbonate, is floating on the water’s surface. (Dave Socky) 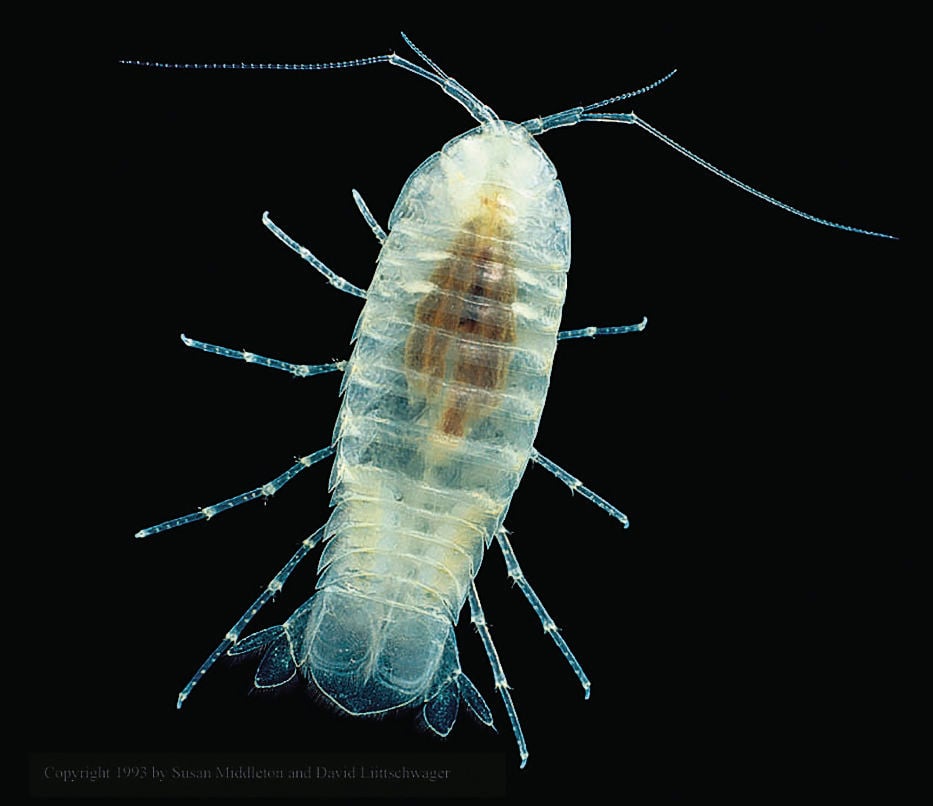 The Madison Cave isopod (Antrolana lira) is an eyeless, translucent crustacean that in 1982 was listed as threatened under the federal Endangered Species Act. 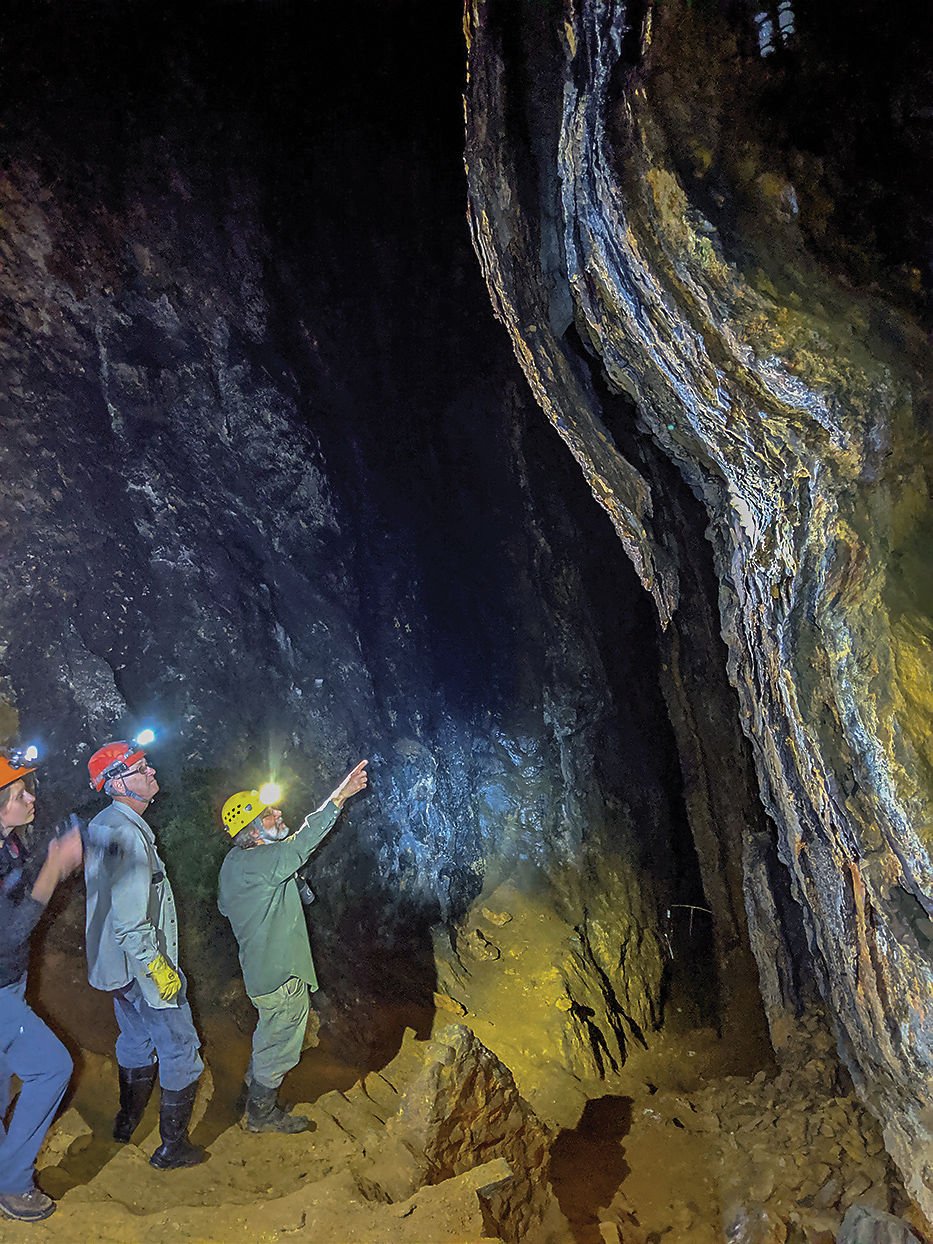 Deep in the bowels of a cave in the hills of Augusta County, VA, lay pools of brilliant blue water. Snowflake-like mineral deposits floated on their surface. But what captivated the biologists who dipped their hands into these crystal-clear waters in the 1950s was what lived beneath the surface: paperclip-size creatures so rare that scientists and landowners would work for many decades to preserve the hollows they call home.

This year, their conservation quest became reality. The Cave Conservancy of the Virginias purchased Madisons Saltpetre Cave and the 88 surrounding acres and partnered with Virginia to turn it into the Cave Hill Natural Area Preserve.

It is the latest member of the state’s network of natural area preserves, created in 1989 to protect rare plants, animals and environments. It has conserved nearly 60,000 acres since then, from the forest and wetlands at Crow’s Nest in Stafford County to the Chesapeake Bay shoreline at Savage Neck Dunes.

The state Department of Conservation and Recreation owns most of the preserves, but several are owned by other nonprofits or individuals. The most recent landscape added to the program before Cave Hill was the vegetated rock formations at Bald Knob in Franklin County in 2016.

“Because there is no dedicated funding source to establish natural areas, and limited state resources overall, partnerships like the one to protect Cave Hill Natural Area Preserve are critical to protect the commonwealth’s biodiversity,” said Jason Bulluck, director of the Virginia Natural Heritage Program.

Madisons Cave will not be open to the public because of its sensitivity, but the surrounding property will provide opportunities for public fishing, boating and walking along the South River. After coronavirus restrictions are lifted, visitors can see similar cave structures at nearby Grand Caverns in the town of Grottoes, considered one of the cave-filled region’s top attractions.

The groundwater-flooded nooks of Madisons Cave have been targeted for protection for many reasons, but an unusual isopod is the headliner. The Madison Cave isopod (Antrolana lira) is an eyeless, translucent crustacean, originally an ocean-dwelling species that adapted to these freshwater environs over “eons of geological time,” according to Wil Orndorff, karst protection coordinator for the state Department of Conservation and Recreation.

“The Madison Cave isopod is perhaps the most unique creature of the Shenandoah Valley,” he said of the species, which was listed under the federal Endangered Species Act in 1982 as threatened.

The rare isopod is the only species in its genus and the only freshwater cirolanid isopod — some might describe them as aquatic pill bugs — identified north of Texas. Its known range is limited to pools in a belt of caves stretching from Lexington, VA, to Charles Town, WV.

This isopod is in good, if equally rare, company at the Cave Hill site, which state scientists consider to be a “biological hotspot.” The caves are home to six globally rare invertebrates, earning the state’s highest ranking for biodiversity significance. This means that, for most of the animals, there are 10 or fewer locations on Earth where they’re known to occur. The caves also contain some species that are still new to science and have yet to be formally described, Orndorff said.

Among the creatures identified at Madisons Cave are two pseudoscorpions (they resemble scorpions but lack the stinging tail), a cave spider and the state-threatened Madison Cave amphipod, which looks like a tiny shrimp.

Such rare, colorless creatures are the norm in Virginia’s underground caves, and about 200 species depend on them for their sole habitat.

“But, of all the couple hundred species we have [in caves], the Madison Cave isopod is probably the most unique from an evolutionary point of view,” Orndorff said. “It has this really old lineage going back to marine ancestors, while everything else has a surface water ancestor.”

Orndorff said the isopod could be traced back an estimated 60 million years, when one of its ancestors left the coral reefs in the Atlantic Ocean and swam inland toward what would be the Shenandoah Valley’s aquifer.

Today, the waters of the Shenandoah Valley still flow toward the ocean through an intricate and somewhat mysterious geological system known as karst. Formed from the dissolution of soluble rocks such as limestone, karst is characterized by abundant sinkholes and caves that drain land and transport water. Karst is a defining geologic feature in western Virginia, which boasts more than 4,000 caves, some more accessible than others.

Western Virginia is also a headwater region for the Chesapeake Bay. And in these permeable karst areas, pollutants from the surface generally reach groundwater more quickly. That makes them a prime example of the water quality concerns that arise throughout the Bay’s watershed, where land use decisions impact water quality downstream.

“Anything that happens on the surface is carried into the cave systems and can alter the conditions that were natural or pre-existing in those systems,” Orndorff said.

To date, the pools in Madisons Cave that support these species contain some of the cleanest water Orndorff has seen. Monitoring over the past decade shows that the water’s temperature, conductivity and turbidity basically never change. For turbidity, which measures the water’s transparency, “anything below a 10 is crystal clear, and we’ve never had a reading above one,” Orndorff said.

And, for those who aren’t as passionate about protecting cave species as he is, Orndorff adds the reminder that these same water systems provide residents with their drinking water.

“You’d be surprised how often I’ve flushed dye down someone’s toilet and had it show up in their well,” he said.

The Steger family that owned Madisons Cave and its surrounds for decades understood the property’s significance. Virginia biologists had a long relationship with the family going back to when renowned cave expert Tom Barr first discovered the rare isopod in 1958. His protégé, John Holsinger, a founder of the Virginia Cave Board who made the isopod discovery with Barr, carried the preservation torch during his tenure, garnering endangered species protections for the isopod in the 1980s.

The state made several attempts over the years to formally conserve the property, and the Steger family saw themselves as stalwart stewards in the meantime.

“It came down to not one specific moment but just, over time, realizing that the conservation community was trustworthy and that we would do our best to preserve this for Virginians in perpetuity,” Orndorff said. “It was a long relationship that finally came to fruition.”

The Cave Conservancy of the Virginias, which will own and manage the property, bought the land from the family this year with funding from a DuPont settlement program for restoration projects in the South River watershed. The settlement was established to mitigate impacts from a Waynesboro DuPont plant’s mercury pollution into the South River watershed leading up to the 1950s.

Mike Ficco, chairman of the Cave Conservancy, said the beauty of the site makes it easy to see why the Steger family found parting with it difficult. He and Orndorff also said they think the cave, perched on a bluff overlooking the river, would have been special to any of the people who experienced the area over time.

“If you tried to put yourself in a native’s frame of reference, it would have been a pretty spectacular place just on its own, even without these crystal-clear pools of water,” Ficco said.

The pre-colonial history of Cave Hill is fairly obscured by heavy use in recent centuries. European settlers mined the caves for saltpetre nitrogen deposits, that were used to manufacture gunpowder, which turned the caves into economic engines through much of the 1800s.

Prominent early Americans might have been familiar with these caves, too. Thomas Jefferson was believed to have visited Cave Hill, which was owned by a man thought to be a cousin of James Madison.

In recent weeks, even Virginia’s cave experts haven’t been able to return to Madisons Cave. The state has further limited access due to concerns about coronavirus transmission between humans and bats. But, under the new protections, the cave and its creatures are even less likely to change anytime soon.

“It’s a real balance to protect the resource and provide education and outreach for the citizens,” Orndorff said. “The main thrust is to protect the biodiversity, and then public access is designed to get people out there so they can develop an appreciation for these things.”