Skip to main content
You are the owner of this article.
Edit Article Add New Article
You have permission to edit this article.
Edit
Welcome, Guest
News
Travel
Columns
Opinion
Multimedia
Podcasts
About
Contact Us
e-Edition
Subscribe
Donate
1 of 6 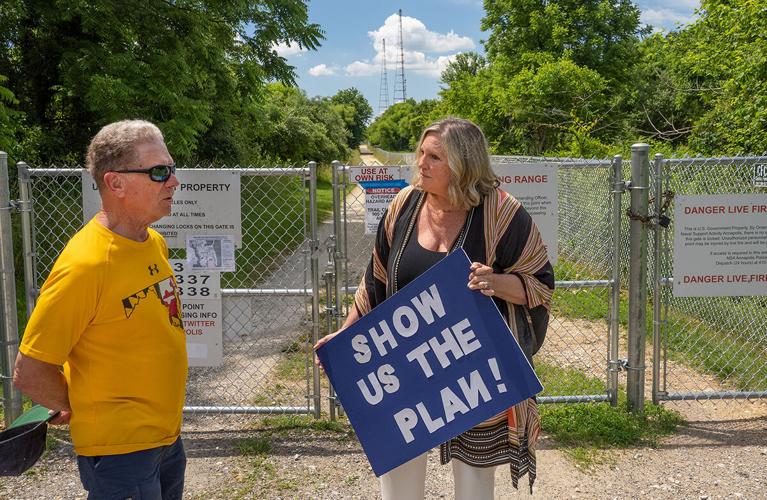 Sue Steinbrook talks with Jim Roser, from Crofton, MD, who likes to walk the trails at Greenbury Point near Annapolis. 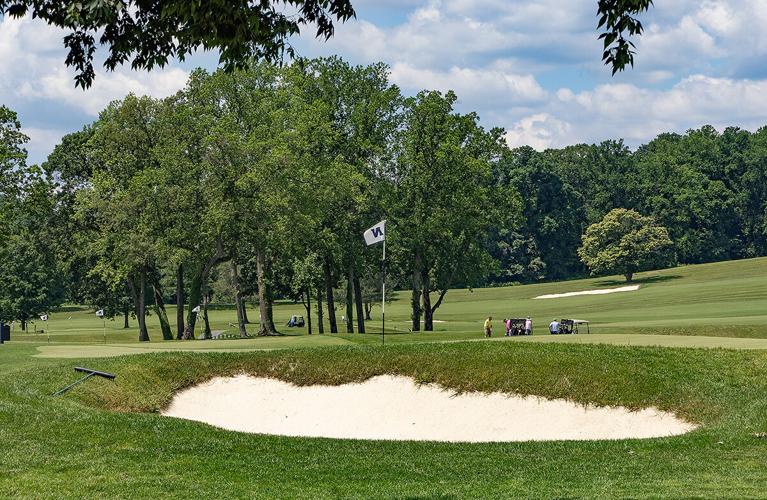 The existing Naval Academy golf course on Greenbury Point near Annapolis has been in operation since 1940. 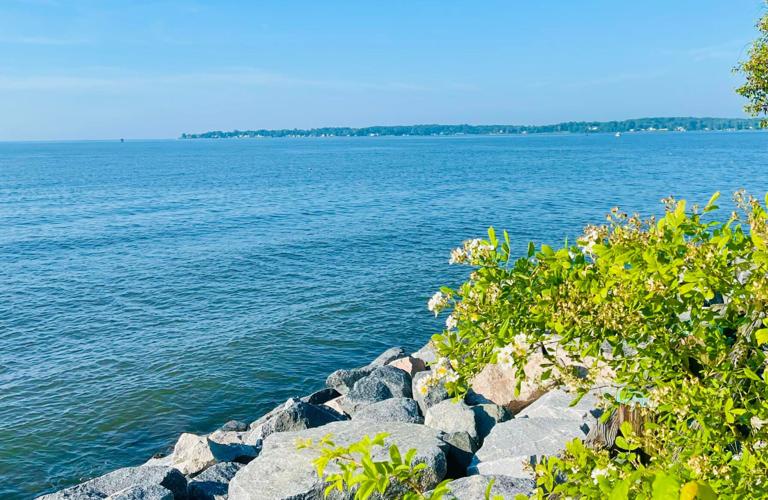 A waterfront view from Greenbury Point, near Annapolis. (Susan Mays) 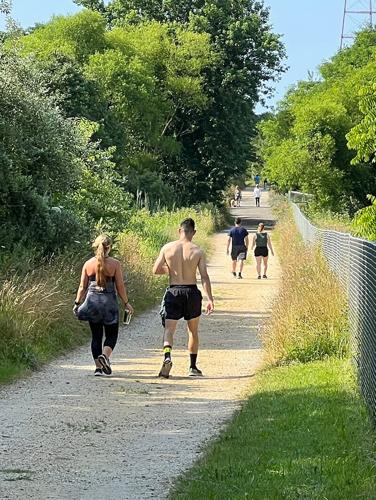 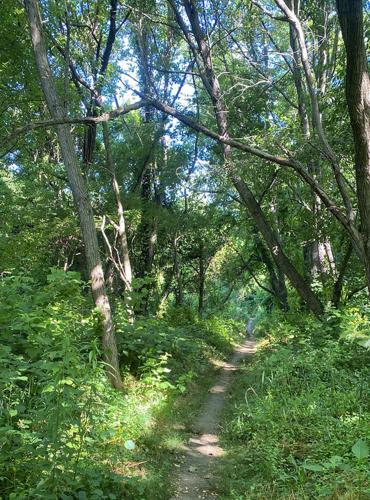 A narrow trail winds through woods at Greenbury Point near Annapolis. (Mary Zarcone) 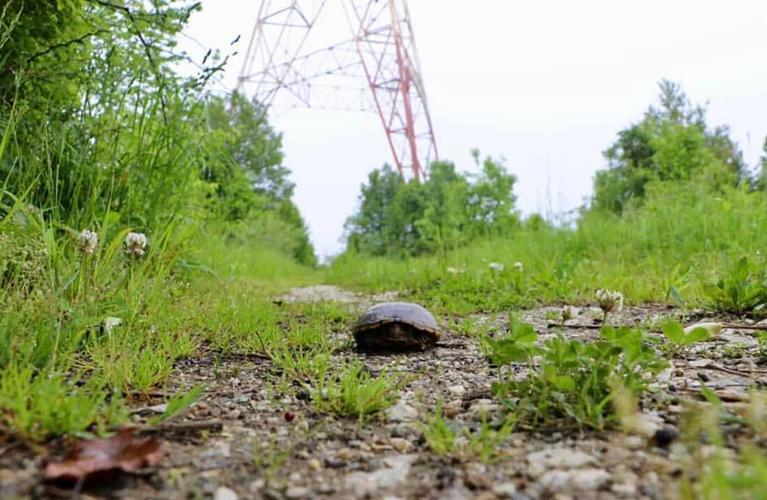 A turtle tucks into its shell near the foot of a military radio tower on Greenbury Point near Annapolis. (Steinbrook Photography)

Sue Steinbrook lived in Annapolis within  a few miles of the Greenbury Point Conservation Area for more than a decade without ever visiting the woodsy oasis. But during the early days of COVID-19 pandemic in 2020, she ran out of excuses not to drop by.

“It’s a hidden gem,” said Steinbrook, an account manager for a local general contractor. “The first thing I wanted do was [show my son] this amazing place.”

Now, she finds herself on the front lines of a battle to save the 230-acre peninsula from a developer accustomed to getting its way: the U.S. Naval Academy.

The Navy publicly acknowledged in April that it is considering a request from the Naval Academy Golf Association to lease land at Greenbury Point to build a second golf course, adjacent to the 18-hole course that has served the storied institution since 1940. Like the existing course, it would be open only to midshipmen, USNA faculty and staff, active and retired military and civilian members.

Alarmed, Steinbrook co-founded a Facebook group called Save Greenbury Point, which has accumulated 1,700 followers since its launch in early May. Each day brings a fresh batch of wildlife photos, words of encouragement and morsels of information about the project.

The outcry quickly spread to the region’s formal environmental groups. The Severn River Association and the Chesapeake Conservancy sponsored an online petition that by late June had collected more than 3,000 signatures. The two organizations also bankrolled a statewide poll, which showed that 67% of respondents oppose the golf course, with only 13% in support.

Anne Arundel County Executive Stuart Pittman initially told nearby residents that he would be willing to tie himself to a tree to stop the project. He has since clarified that he was “figuratively speaking,” but his concerns remain deep.

“My advice to [the Naval Academy] is to listen, engage and work with the community,” Pittman said.

The project’s location, though, presents a complication. The golf course is proposed on land owned by the Navy — a branch of the Department of Defense and as such not governed by county zoning rules or, in many cases, state environmental laws. As a result, opponents don’t have access to many of the usual levers of democracy.

“If this was being done at the county or state level or even another federal agency,” said Joel Dunn, the Conservancy’s president and CEO, “there is a process that would require open public comment and engagement, and that hasn’t happened here.”

Steinbrook and her environmental allies therefore are pinning their hopes of stopping the project on a patchwork of federal environmental laws and regulations. She, for one, is confident that opponents can make a strong argument against allowing the project to go forward.

“It’s wrong for so many reasons,” Steinbrook said. “To monetize [the property] would be an environmental sin.”

Enjoyed by ‘all walks of life’

Greenbury Point juts into the Chesapeake Bay on the north side of the mouth of the Severn River. The land is owned by the Navy as part of the Naval Support Activity Annapolis facility.

Some activists ground their arguments for the land’s salvation in its seminal role in Maryland’s history. In 1649, Puritans expelled from Virginia founded a settlement on what is now called Greenbury Point. Over the next few decades, the hamlet outgrew the peninsula’s modest acreage, spilling across the river into what would become the state capital: Annapolis.

By the 1700s, the point had been converted into farmland. The Naval Academy purchased the site in 1910 and temporarily used it as a dairy farm. But for most of the 1900s, the peninsula was occupied by nearly two dozen tall radio towers used for communications research and transmitting messages to Naval vessels in the Atlantic and the Mediterranean Sea.

All but three of the 19 towers were demolished in 1999. The surviving towers structures continue to serve as a navigation aid, visible for miles, for Bay boaters. The property at the tip of the peninsula remains in use as an occasional training ground for midshipmen and as a buffer for a firing range.

Despite years of human activity, nature is returning to Greenbury Point, advocates say. Dotting the landscape are pockets of trees — a mix of loblolly pine, American elm, tulip tree, chestnut oak and mulberry, among other species. Dozens of bird species have been spotted there as well, including bald eagles and ospreys.

When not in use by the Navy, the point is open to recreation. Since 2000, the Navy has operated a 2,400-square-foot nature center on the property and maintained about 2 miles of walking trails. Bird watchers, runners, walkers and anglers are among those who find the area inviting, said Jesse Iliff, executive director of the Severn River Association.

“Right now, Greenbury Point is used by people from all walks of life,” he said. “The notion that some elite, nondisclosed group of people is pushing to take a resource from the community really sticks in my craw.”

High demand for golf at academy

Rumors of the golf course proposal began trickling out into the surrounding residential areas earlier this year. Navy officials had scheduled at least one informal community meeting but cancelled it after the plans started kindling an uproar.

Calls for the Navy to turn over proposal documents have become a battle cry among opponents. The Navy’s response — that there are no plans to share because the proposal hasn’t advanced to that stage yet — has been met with skepticism.

Ed Zeigler, director of public affairs for Naval District Washington, characterized the plans as a “proposed concept.” In a written statement to the Bay Journal, he added that “If the proposed project moves through the review process, transparency, community involvement and input will be critical to meeting the needs of the Navy and the Annapolis community.”

Chet Gladchuk, the athletic director for the Naval Academy, also insisted that no detailed plans have been drawn up. “The Navy has not extended permission to move forward with any concept development at this time,” he wrote in an email. “Therefore, I have nothing formal on the matter. At this time, everything is purely conceptual. Glad to talk to you if and when we have something to share.”

Gladchuk didn’t reply to a follow-up question asking why the academy is pursuing a second golf course.

The current Naval Academy golf course is widely acclaimed as a premier facility, a sterling example of the work of the famed early 1900s course architect William Flynn. In 2020, the academy completed a $6 million renovation of the course, refurbishing the greens, bunkers and fairways while installing a new irrigation system.

According to the course’s website, more than 480 golfers are signed up as members, and no new members are being accepted.

To add more, the site asserts, would put the facility over capacity and potentially degrade the experience for existing members.

In a February letter, Gladchuk told Navy officials in Washington that mitigation efforts would include building a public walking trail, installing a berm to protect “sensitive hazardous material,” and offsetting the losses of trees and conservation land.

Environmental assets in the way

Little may be publicly known about the proposed golf course. But what is known about Greenbury Point suggests that a normal golf course developer would have to leap over several environmental hurdles to build a course there.

One of the most formidable obstacles would be the state’s Critical Area Act. The law, passed in 1984, limits development within 1,000 feet of tidal waters and largely prohibits any disturbance of land or vegetation within 100 feet of the water.

Greenbury Point is almost entirely inside the critical area. Legal experts say it is unlikely that the project would be subject to that environmental law because it is enforced at the state level — and federal land is generally exempted from lower regulatory edicts.

On the other hand, if the new course disturbs wetlands or waterways — an analysis conducted by the Chesapeake Conservancy suggests that half of the 230-acre property qualifies — the project will likely need to secure permits from the state, experts say. That authority is delegated from the federal government.

The property’s forest cover could also pose an obstacle. Zeigler confirmed that the Greenbury Point has been the focus

of years of tree plantings and off-site mitigation required for other Navy projects in the region.

Environmentalists say that removing any of those trees would dismantle the military branch’s earlier environmental commitments and deliver a blow to the Chesapeake Bay restoration effort. The Department of Defense was the first federal agency to formally sign on to the multi-state and federal cleanup pact.

“Part of the Bay Agreement was they agreed to protect and maintain forest cover,” said Josh Kurtz, head of the Chesapeake Bay Foundation’s Maryland office. “And we see this as an important place for meeting those requirements.”

Despite its green vistas, Kurtz said, a golf course would be a particularly unwelcome addition to the Bay’s shoreline.

Opponents point to a constellation of federal environmental laws they can wield against the project, such as:

“If we can’t beat this back,” said Iliff of the Severn River Association, “we’re not doing our jobs.”

But in previous projects, the Naval Academy has faced little friction from such regulations. During the recent golf course renovation and a separate project to build guest cottages about half a mile south of the course, for instance, the Navy was allowed to bypass requirements for an environmental assessment and public comment.

As reported by Annapolis-based reporter Donna Cole, the military branch received what is called a “categorical exclusion” under NEPA — a finding reserved for projects believed to pose little or no effect on the environment.

Steinbrook said the meteoric growth of her Facebook group shows how strongly the community opposes the project. At the very least, she said, she wants the Navy to follow through on its vows to be transparent about its plans and provide opportunities for meaningful public input.

“It is protected under the Sikes Act, and you can’t just turn your head,” she said. “It will be interesting to see how they try to get around that.”