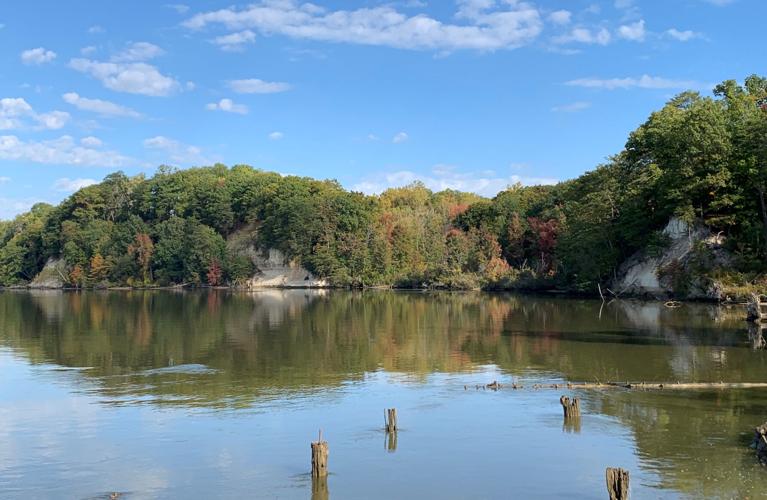 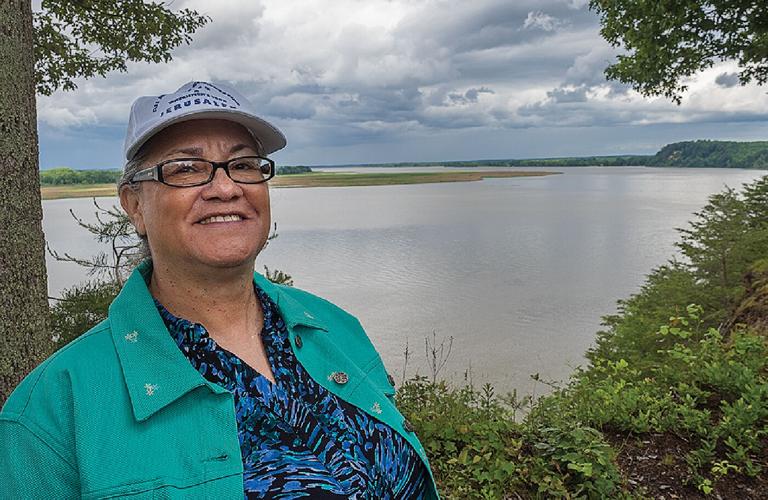 The threat of development that has long loomed over a historic stretch of cliffs along Virginia’s Rappahannock River is lifted. The Conservation Fund’s purchase of 964 acres of land was finalized on Dec. 8, more than doubling the length of Fones Cliffs shoreline protected from development.

The Fund, which purchased the property for $8.1 million through a bankruptcy auction on Nov. 3, will own it only temporarily. Plans are underway to permanently protect and eventually transfer ownership of the land to the Rappahannock Tribe next year.

“Years of tracking this property through multiple owners and a complex bankruptcy proceeding has finally brought us to this acquisition,” said Heather Richards, the Fund’s Mid-Atlantic regional director. “We’re thrilled that we were able to seize our chance to purchase the property and work with our partners to protect this significant place for future generations.

The land represents the largest previously unprotected portion of Fones Cliffs. It means that nearly 95% of Fones Cliffs is now conserved, including almost 3 miles of cliff-lined shores.

It is the Fund’s third purchase of acreage along the river to protect what the conservation community considers an ecologically and historically vital piece of Virginia landscape on the state’s Northern Neck.

The Fund buys properties to conserve important landscapes but does not intend to be the final owner. Before making a purchase, it usually lines up an agency or organization that it will sell or transfer a property to and ensures that they have the necessary funds for the transaction. But this situation is different.

Richards said the Fund plans to sell a conservation easement to the U.S. Fish and Wildlife Service, which will ensure that protections are legally attached to the land and cover “a significant portion of the value of the property.” The funding for that will come from the federal Land and Water Conservation Fund, which is fully and permanently funded through the Great American Outdoors Act. The Fund will seek additional money to help cover the cost of the purchase before transferring ownership of the land to the Rappahannock Tribe.

“We’re working with the Tribe, the Chesapeake Conservancy and others to put together [enough funds to cover] whatever’s not paid for by the easement,” said Richards, whose organization has helped conserve more than 84,000 acres in Virginia alone. “We’ve taken a bit of a leap of faith here. But we feel confident we’ll be able to find [the funding].”

Rappahannock Tribe Chief Anne Richardson said the recent transaction is “incredibly healing” and “of upmost importance for the Rappahannocks to be able to return to the lands of our ancestors.”

Conservation groups have been keeping an eagle’s eye on this nearly 1,000-acre property since a development there was first proposed eight years ago.

Its previous owner, the Virginia True Corp., earned county approval in 2015 to build an 18-hole golf course, spa and hundreds of homes. But those plans ran into major headwinds after a manager of the property illegally cleared 13 acres of trees near the riverbank in 2017, triggering costly fines and additional oversight from state regulators during the following two years.

In 2019, Virginia True filed for bankruptcy in New York. The filings included a revamped plan for the property: a combination of federally funded housing, a hotel and luxury condos in 10-story towers.

The Fund’s $8.1 million bid at the bankruptcy auction was enough to beat a new group of developers — including some of the previous property owners — who intended to resurrect plans for a golf course and housing along the river. 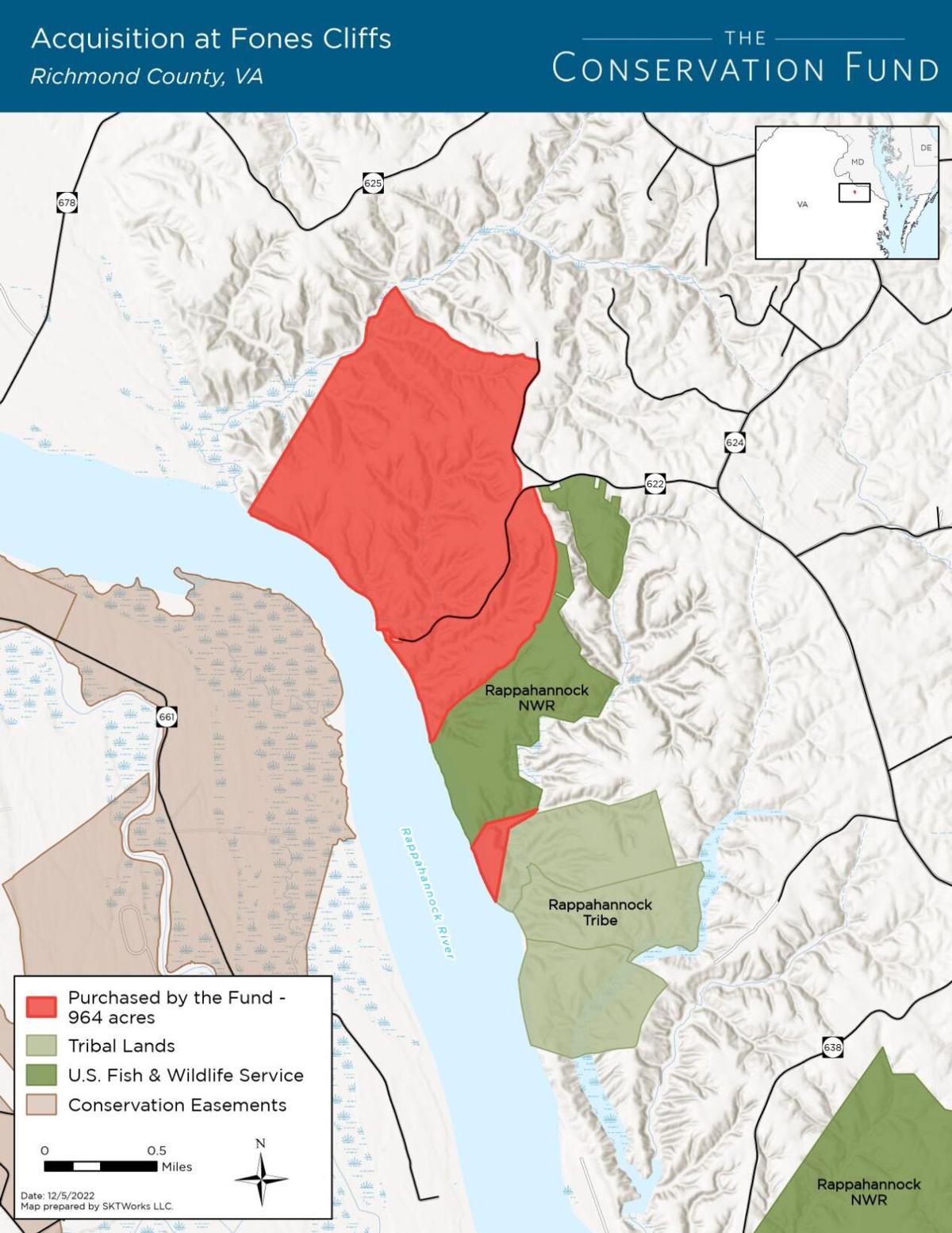 “Being able to acquire it looked so grim for so long,” Richards said. “There were so many low points.” As recently as this summer, “we thought we wouldn’t even have the opportunity to bid on [the property] through the bankruptcy process. We thought it might get transferred internally.”

Conservation groups have played key roles in purchasing two other large chunks of the Fones Cliffs landscape, which is home to one of the largest concentrations of bald eagles in the country and is historically and culturally important to the Rappahannock Tribe.

One 252-acre property that had also been slated for development was purchased by The Conservation Fund in 2018 and then by the U.S. Fish and Wildlife Service the next year. The Chesapeake Conservancy purchased another 465-acre property from Northern Neck Lumber Co. and donated it in April to the Rappahannock Tribe.

The newly protected 964-acre property is believed to include the location of the historic village of Wecuppom. This stretch of the river is along the Captain John Smith Chesapeake National Historic Trail. During his 1608 exploration of the Bay region, Capt. John Smith journaled about fleeing a barrage of arrows shot by the Rappahannocks as his boat sailed the river below Fones Cliffs.