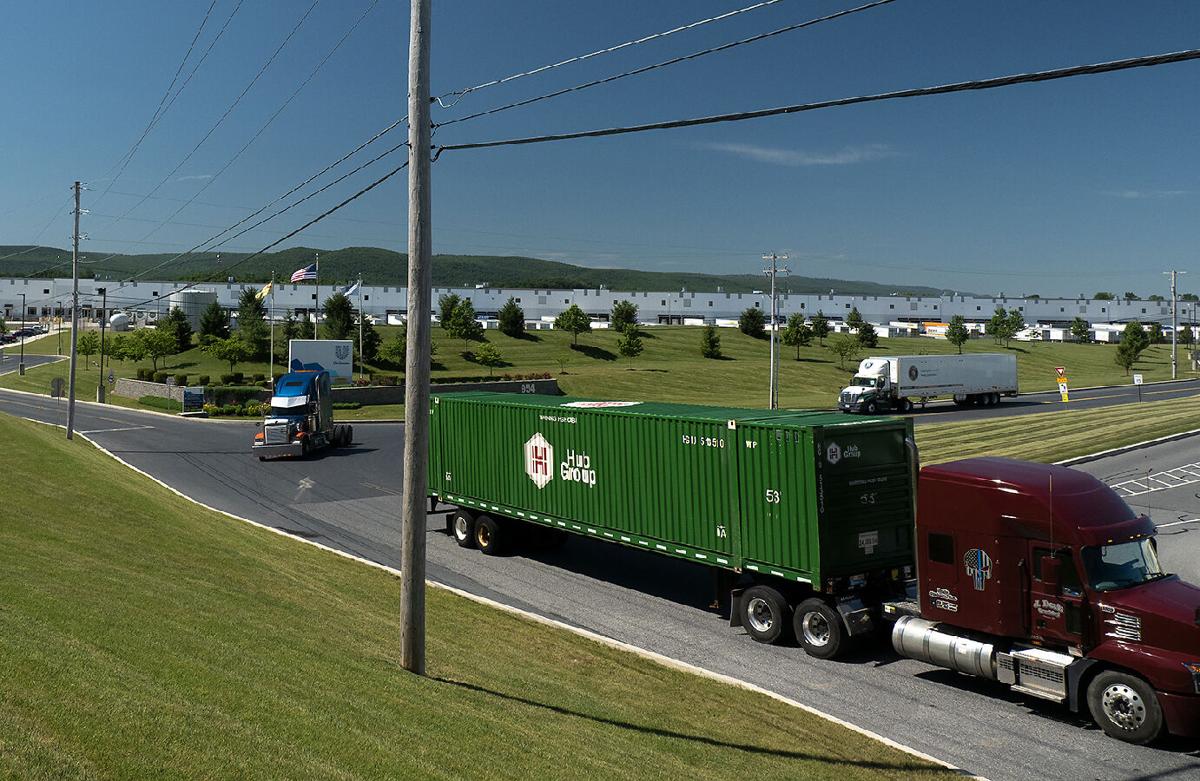 Trucks leave warehouses at the Key Logistics Park along Interstate 81 near Carlisle, PA. 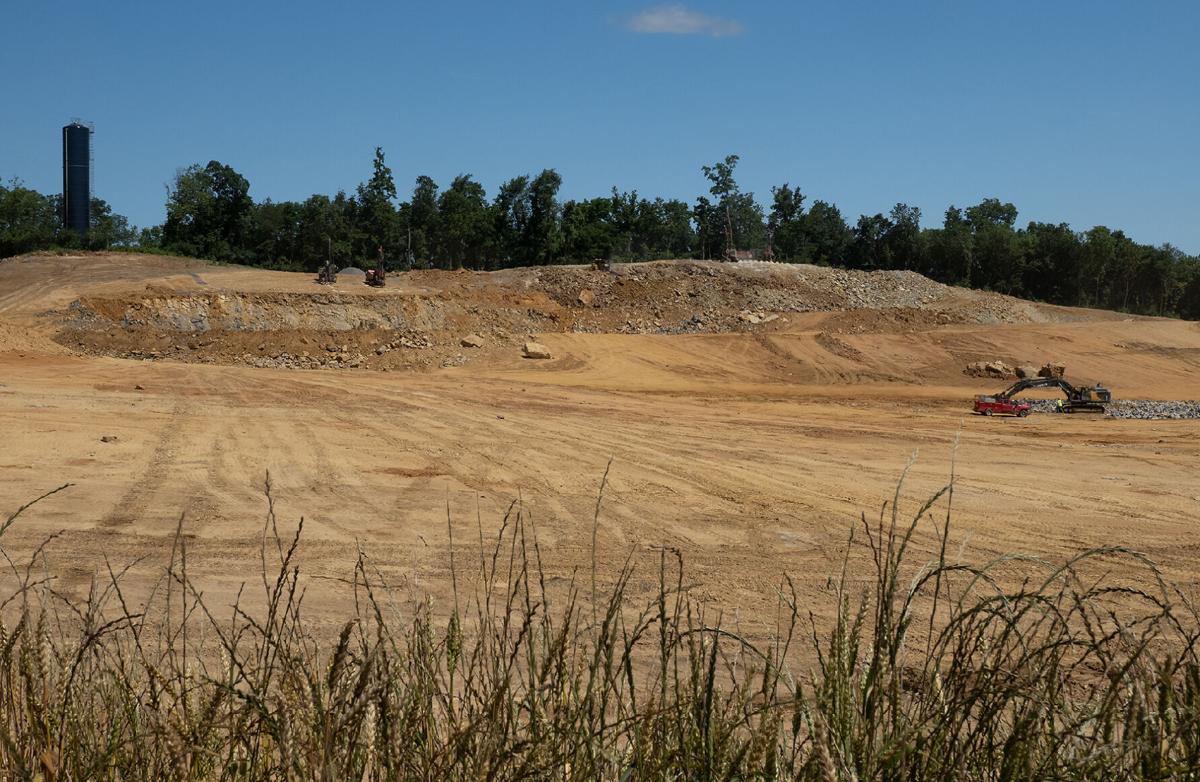 A site is cleared for construction of a large warehouse near Interstate 81 in Pennsylvania. 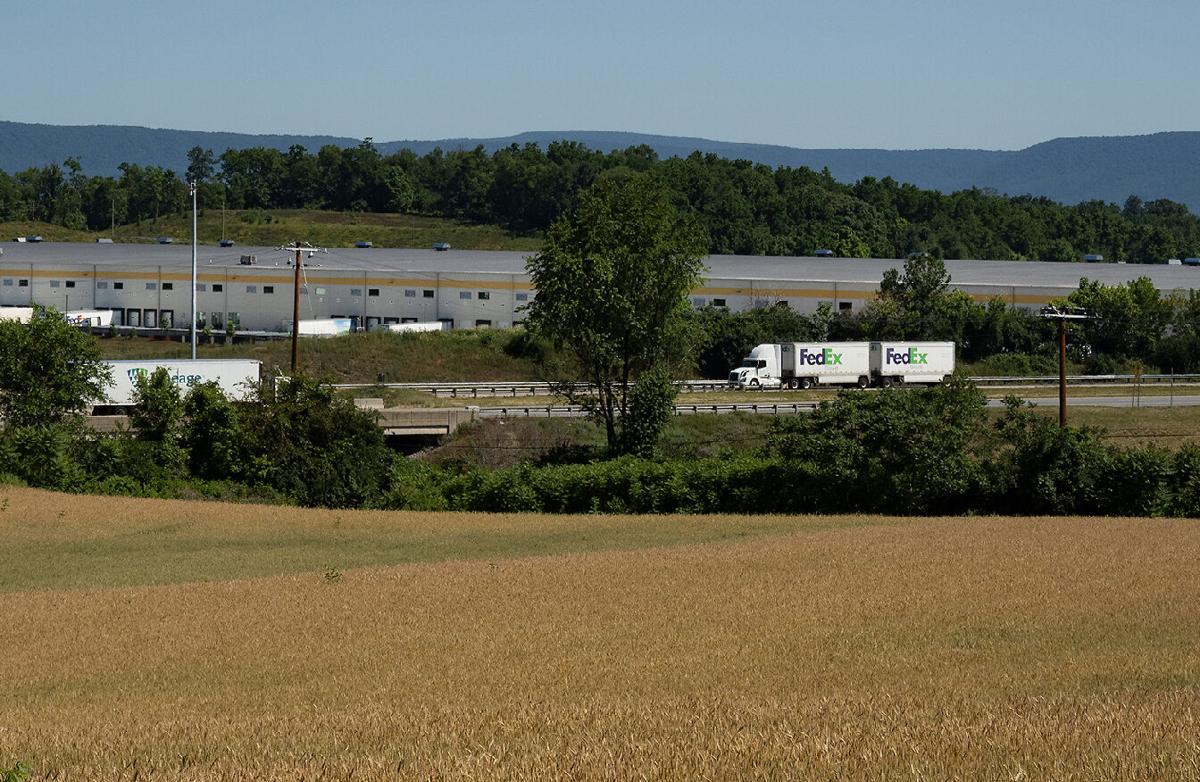 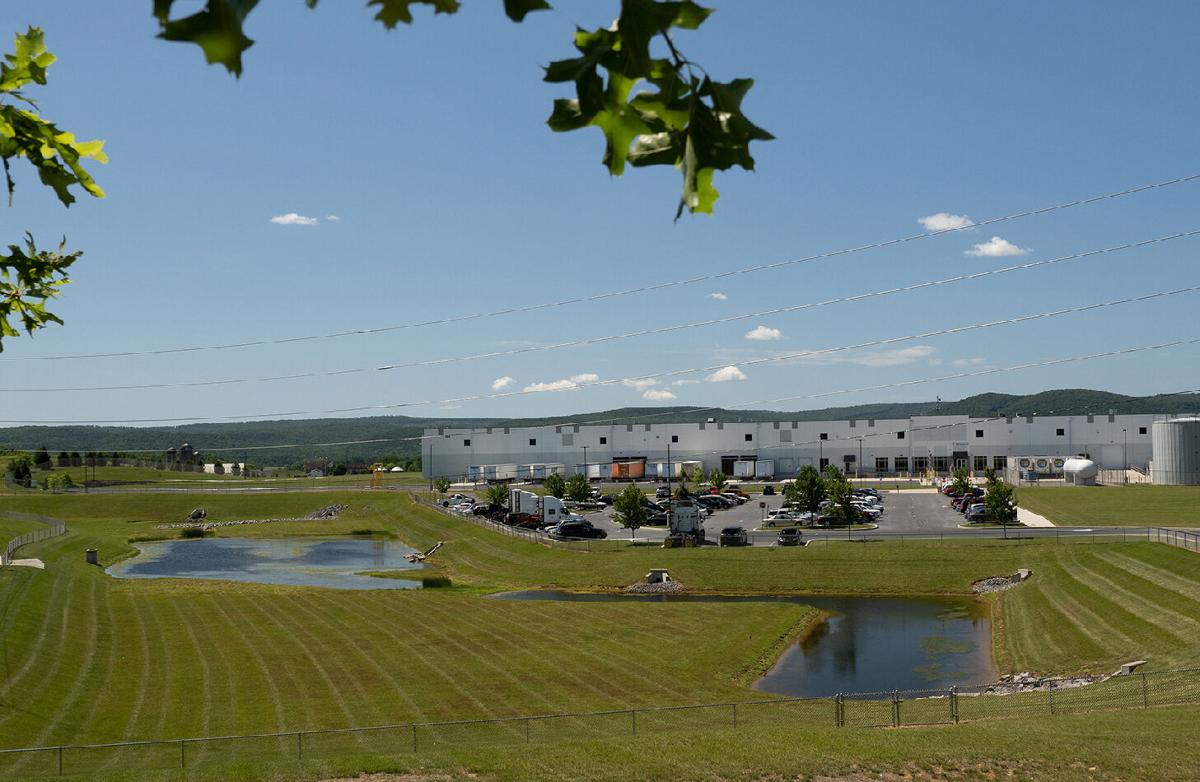 Stormwater ponds are part of the landscape at Unilever/DHL Logistics near Carlisle, PA. 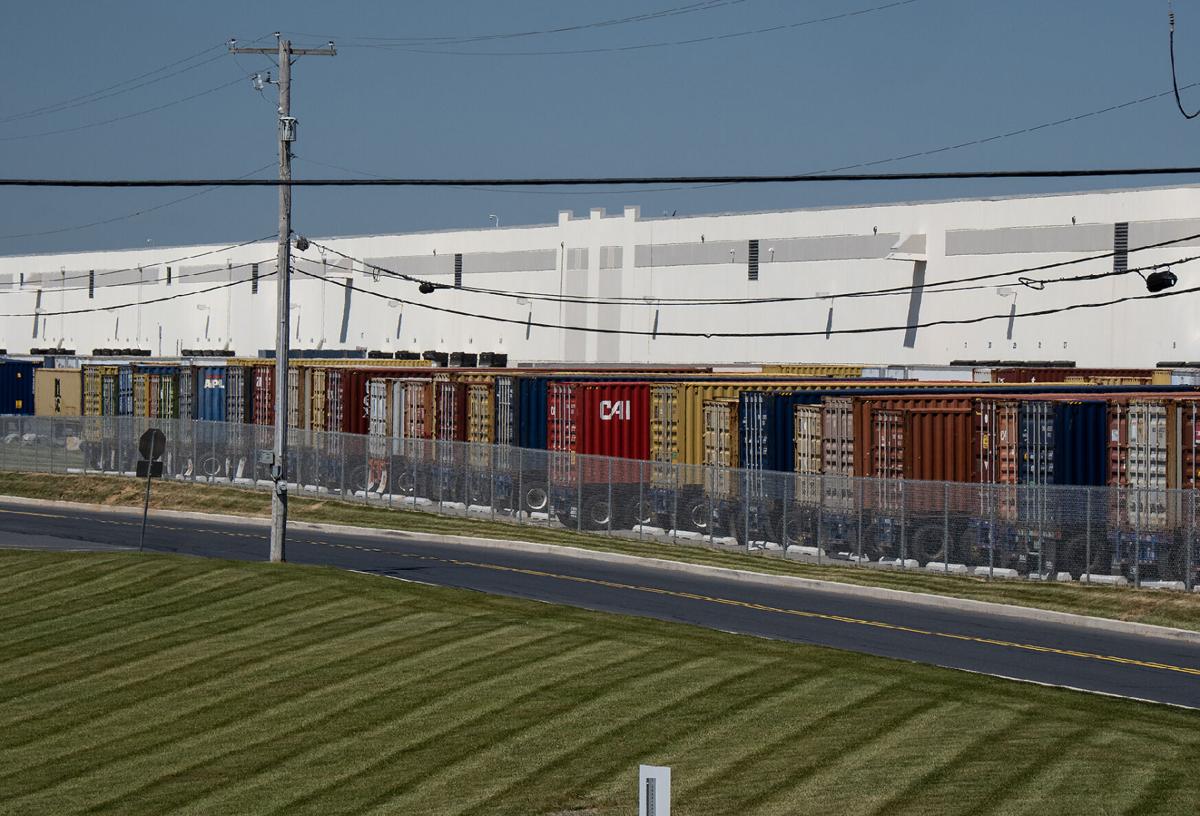 Trailers line up at loading bays at Key Logistics Park near Carlisle, PA. 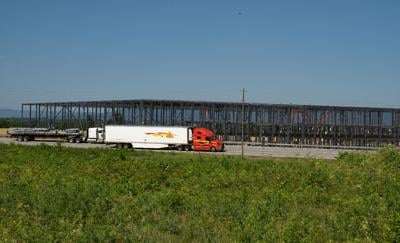 If you have ordered something online and been amazed when it arrives at your doorstep the next day, you can probably thank a super-sized warehouse.

Driven by “eCommerce” and supercharged by the stay-at-home shopping habits induced by COVID-19, mega warehouses are reshaping the landscape.

The gargantuan, windowless structures along major highways, with 18-wheel tractor-trailers streaming in and out of loading bays, make a Walmart Supercenter look like a drive-through hamburger joint.

Ever-larger warehouses, some the size of nearly 35 football fields, are popping up in corn fields and next to suburban neighborhoods in parts of the Chesapeake Bay region. Among the epicenters: Interstates 78 and 81 in Pennsylvania and around Baltimore.

But they are not always embraced. Residents and officials in some communities have packed town meetings and filed lawsuits to stop monster buildings in their midst.

The list of complaints can be as long as the buildings themselves: air pollution from increased truck traffic; the gush of increased stormwater; environmental justice conflicts; traffic woes; noise and light pollution; loss of farmland; and the abrupt change in community character.

“We all know about urban sprawl,” said Nathan Wolf, a Pennsylvania attorney who has been involved in four challenges to mega warehouses along I-81. “There’s also industrial sprawl.”

Where the warehouses roam

To be sure, big warehouses have been a staple along major arteries for decades. But fueled by the big-box warehouse boom, the nation’s industrial real estate market set a record in 2020 even as the country’s overall economy was faltering.

Nowhere in the Unites States have more warehouses of at least 1 million square feet been built lately than along a 233-mile section of Interstates 81 and 78 in Pennsylvania, according to CBRE. Eleven of these structures, each the size of nearly 18 football fields, were built in 2020 alone.

Altogether, 554 warehouses classified as big-box facilities in the I-78/I-81 corridor, according to CBRE.

The reason is simple, industry analysts say. That stretch of expressway enables trucks to reach 40% of the U.S. population within a day. Access to major ports, low-cost land and favorable tax rates add to the area’s appeal.

The I-81 corridor in Cumberland County, located just outside Harrisburg, has 76 warehouses, each covering at least 200,000 square feet of floor space, the definition used by CBRE to describe industrial big-box facilities.

County Commissioner Jean Foschi acknowledges that the warehouses have brought good jobs and increased tax revenue. But trucks serving facilities in Cumberland and nearby counties have taken a toll on local infrastructure and air quality, she said.

Central Pennsylvania leads the nation with the most square feet of warehouses leased. And more are on the way, including a 1.9-million-square-foot “fulfillment center” — 43 acres under a single roof — under construction in Franklin County, near the Maryland border.

Large warehouses have been built on 3,600 acres of farmland along I-81 in the largely rural county since the mid-1990s, converting fields to gleaming new rectangular buildings, with vast expanses of asphalt and truck bays.

Congestion on I-81 and clogged exits are becoming more of a problem. Truck volume has tripled on the bustling interstate over the past 30 years, and as much as 40% of the daily flow these days can be tractor-trailers. A new interchange will soon be added in Franklin County at a cost of $23 million to serve a growing cluster of big warehouses.

Pennsylvania may be leading the big-box race, but other markets aren’t far behind. In the Baltimore area, developers completed 2.8 million square feet of warehouse space in 2020, placing it 10th in the nation. Another 3.1 million square feet is under construction, according to CBRE.

Increasingly, the warehouses are coming under fire for exacerbating air pollution.

Exhaust from diesel truck engines is one of the main contributors to smog and soot. In Pennsylvania, more than 20% of nitrogen oxide emissions — a precursor of smog and an airborne source of water pollution — comes from diesel engines. Tiny invisible soot particles are also emitted and, when inhaled, can cause respiratory problems. That’s especially a problem for the elderly, those with compromised breathing and heart conditions and young children whose lungs are still forming.

In 2005, the signatures of more than 100 local physicians were published in a newspaper ad blaming the growing concentration of truck traffic for contributing to Cumberland County’s poor air quality.

Smog levels have declined in Cumberland County since 2015 and in Franklin County since 2010, according to the American Lung Association. But monitoring stations operated by the state are not located near warehouses or I-81. And soot levels were not monitored because there were no sampling stations in the counties.

A national initiative could alter the air debate in the coming years. The U.S. Environmental Protection Agency is nearing completion of its Cleaner Trucks Initiative, which would set tougher emissions limits on heavy truck engines to greatly reduce soot and smog pollution.

A flood of runoff

Unchecked runoff from urban areas has proven especially tough to control as a source of pollution in streams and rivers that flow to the Chesapeake Bay, defying more than three decades’ worth of efforts to turn that tide. According to computer models managed by the state-federal Chesapeake Bay Program, stormwater water runoff accounts for 16% of the nitrogen, 18% of phosphorus and 24% of sediment entering the Bay.

The Bay Program, which governs the restoration effort launched in 1983, tracks 55 types of land uses in the Bay’s drainage basin. Only three are devoted to impervious cover — roads, structures and other hard surfaces — but they do not distinguish among different types of development, such as an Amazon fulfillment center or a housing subdivision.

Researchers have long known that industrial buildings, such as warehouses, likely pose a bigger threat to stormwater quality than other development. A new Virginia Tech study offers fresh evidence of that problem.

The research team monitored stormwater quality for one year at six catchments in Virginia Beach, each dominated by a single land use. They included an industrial area with huge rooftops and acres of asphalt. The others were suburban landscapes: a commercial center, a highway strip, a park and low– and high-density housing zones.

Of the areas studied, the industry-dominated area had the highest concentration of nitrate, a key water pollutant, along with large amounts of sediment in its stormwater, according to the study, which was published in June.

In urban areas, developers are required to install “best management practices,” such as shallow ponds, to allow pollutants to settle out. David Sample, one of the study’s authors, said the research suggests that such controls at industrial facilities may not be capturing as much pollution as thought. Inadequate design or poor maintenance may be to blame, he said.

And, when outside urban areas, warehouses often are not covered by state and federal stormwater permit programs at all.

The buildings, and the surrounding sea of parking lots, can be devastating to the nearby streams. Research shows that when the amount of impervious cover in a watershed reaches 10%, stream health rapidly declines and sensitive species like brook trout disappear.

On the outskirts of Leesburg, VA, stormwater concerns threaten to derail an Indianapolis-based developer’s plans to build a 200,000-square-foot distribution warehouse, covering nearly the same amount of space as four football fields.

The Loudoun County Planning Commission is urging the approval of the Scannell Properties project, contradicting county staff. County planners recommended rejecting the proposal because of impacts on stream buffers and concerns about the steep slopes on some of the property.

Proponents sought to contrast the project with the land-hungry internet data centers that have come to dominate Northern Virginia’s landscape. Those facilities are often criticized for their high energy usage and intense water usage for cooling systems.

Colleen Gillis, a consultant representing Scannell, told the board at its May 24 meeting that the proposed warehouse is small for its type. “This property is planned for industrial uses. We’re doing a distribution facility. A data center would blow out a lot more of those environmental resources. So, as much as people might say, ‘Ugh, I’m not sure,’ it’s the most environmentally sensitive use for this place type.”

The county’s board was scheduled to hear the case on July 14.

The clustering of warehouse development in some cases has caused environmental justice problems.

In Hanover County, VA, for example, Wegmans Food Markets has been locked in a legal and regulatory battle over a proposed 1.7 million-square-foot distribution center near the historic Black community of Brown Grove. It lies about 15 miles north of Richmond. Residents there already deal with the effects of a bustling truck stop, a landfill and a concrete plant, said Kenneth Spurlock, the deacon at the Brown Grove Baptist Church. “I don’t think I know of any other community that has those things going,” he said.

In April, the local NAACP chapter sued to appeal a 4–3 vote by the State Water Control Board allowing the project to impact nearly 15 acres of wetlands.

“Right across this road, acres of wetlands will be destroyed,” said Pat Hunter-Jordan, president of the Hanover County NAACP, at a news conference outside Spurlock’s church announcing the lawsuit. “The foundation of a one-room Black school will be lost. Unmarked graves of our ancestors lay on this very property.”

Where should monster warehouses go if not in farm country or next to neighborhoods? Developers in many areas are facing calls to steer facilities toward blighted industrial sites and urban areas where there are ready workforces that won’t have to travel far. On the other hand, such sites could also pose environmental justice concerns if they are located in or near neighborhoods that are already burdened by industry and related problems with air and water pollution.

New Jersey made waves on the issue this spring when lawmakers considered a bill that would require warehouse developers to complete a regional impact report, though it failed to make it out of committee.

“Site location and conditions need to consider impacts to neighborhoods, nearby communities, environmentally sensitive land, scenic vistas and flood zones,” said Taylor McFarland, chapter coordinator for Sierra Club-New Jersey. “There are economic benefits and jobs that can come from warehouse projects. However, we need to make sure sites for these projects are appropriate.”