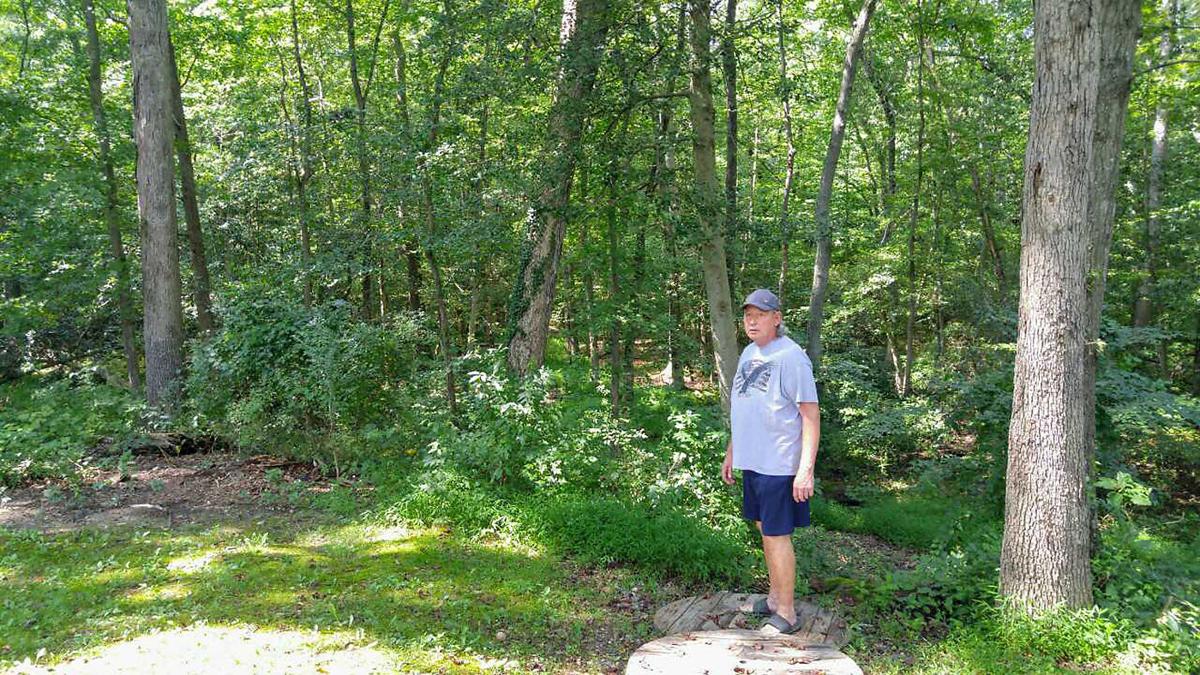 Michael Lyston stands in his backyard, which borders Abingdon Woods in Harford County, MD. A developer plans to clear two-thirds of the 300-plus acre forest there for a business park. 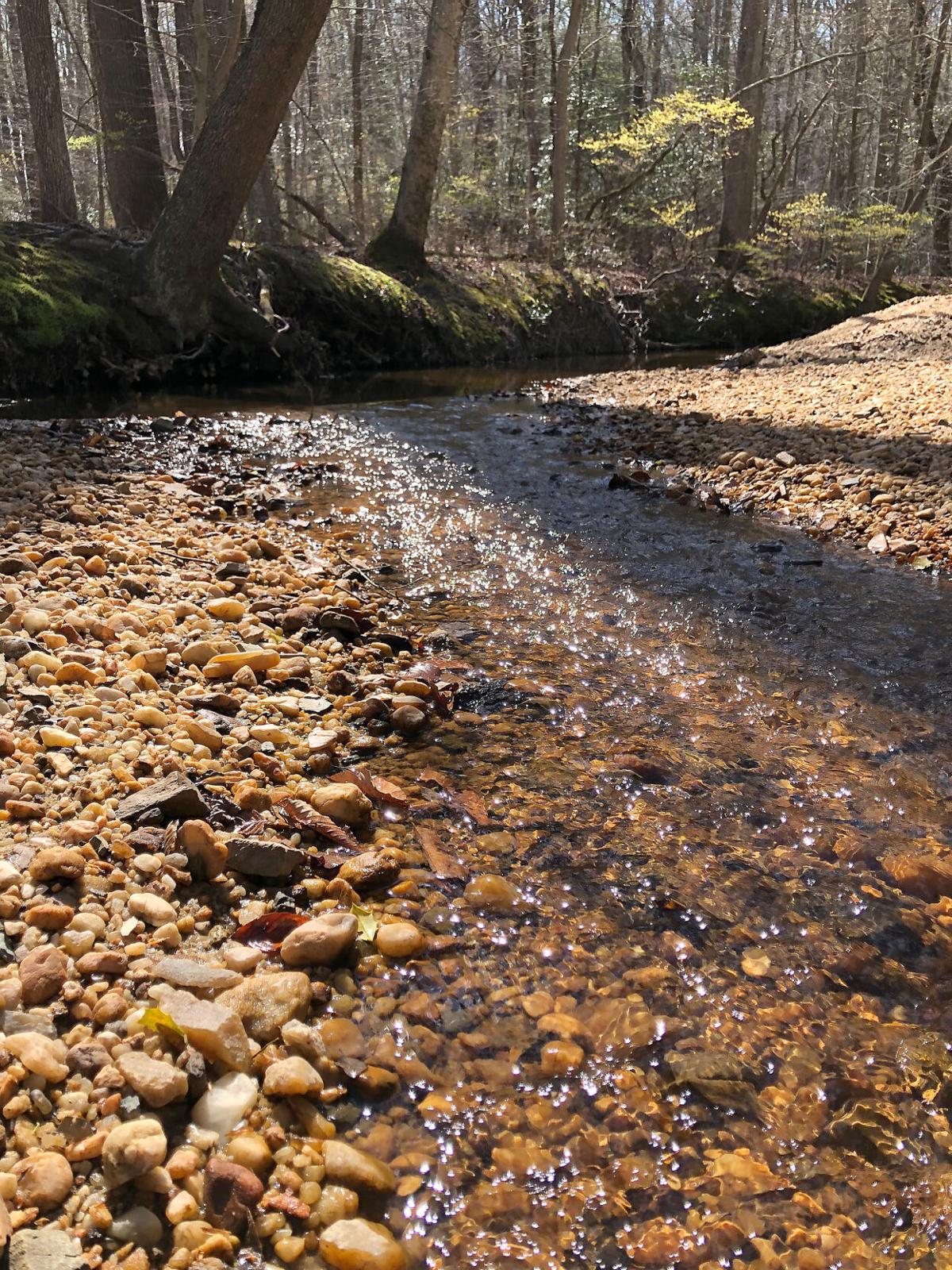 Haha Branch flows along the western side of Abingdon Woods on its way to the Bush River, a Chesapeake Bay tributary, in Harford County, MD.

Opponents of a development that would bulldoze woodlands near the head of the Chesapeake Bay have another chance to speak out on the controversial project.

The Maryland Department of the Environment is taking public comments until Oct. 15 on a key permit it had previously granted for a business park to be built on a wooded 330-acre tract in Harford County.

The move comes after a Harford County Circuit Court judge sent back the permit, which would allow the developer to build across streams and impact wetlands at the site. Abingdon Woods, as locals call it, is one of the last sizable forest tracts in a heavily developed area near the Bush River, a Bay tributary. The developer’s plan is to clear 220 acres, or two-thirds of the woodlands, to build warehouses, a hotel and other commercial buildings.

The Gunpowder Riverkeeper and some area residents had filed the suit challenging the MDE permit, arguing that regulators had not given them a chance to comment on key information regulators relied upon.

The MDE had required the developer to show that the project would not degrade Otter Point Creek, a sensitive tidal tributary of the Bush River, and that its socioeconomic benefits outweighed any harm to the environment. In both cases, the MDE sided with the developer.

But those analyses were not made available to project opponents in time for them to review and pose objections, Judge Diane Adkins-Tobin found. She put a hold on the permit and ordered the MDE to invite and consider public comment.

“The balancing test that MDE has to undergo should be fully informed,” said Gunpowder Riverkeeper Theaux Le Gardeur. He argued that the state agency had based its decision on an incomplete record, without hearing from all those concerned.

Chesapeake Real Estate Group, the developer at that time, maintained that the wooded tract in Abingdon, next to Interstate 95, is the only suitable site for a distribution complex. Earlier this year, that company sold its interest in the project to BTC III I-95 Logistics Center LLC, which continues to pursue it.

But opponents noted that there were 18 vacant warehouses in the region, and Le Gardeur argued that regulators gave insufficient consideration to how the project would affect Otter Point Creek, which is classified by the state as a Tier II stream deserving special protection.

“It’s a question of whether MDE is going to continue to allow new development in sensitive areas,” Le Gardeur said, “or prompt applicants to consider redevelopment.”

The Chesapeake Bay Foundation and some residents neighboring the project site also had filed suit challenging Harford County’s approval of the plans. They argued that the county had violated its own forest conservation law in doing so. But Judge Adkins-Tobin dismissed that suit, finding that the county’s acceptance of the developer’s forest plan was not a “final administrative act” and couldn’t be legally challenged until later in the process. The Maryland Court of Special Appeals recently upheld her decision.  The Bay Foundation is evaluating whether to try for a review by the Maryland Court of Appeals, according to spokesman AJ Metcalf.

For more information on the permit, go here.

To submit written comments, mail them to the Maryland Department of the Environment, Attn: Jeffrey Thompson, 1800 Washington Boulevard, Baltimore, MD 21230, or email  jeffrey.thompson@maryland.gov.

This is just another example of the loose standards that are used by the Harford County government to destroy woodlands and get revenue for commercial construction…not to mention whatever is exchanged for signing off on these land deals! I’m appalled at the number of vacant commercial buildings in this County that sit fallow every day and then see the powers that be willing to allow development of pristine woodlands for more potential empty commercial buildings. It makes no logical sense! What will it take to stop the unnecessary building/development within this County? Do we need to clean house of those who are willing to sell out our remaining public lands? Should this be from the judges all the way to the office staff that rubber stamp these plans that are put before them! I cannot fathom what this County will look like in ten more years when every blade of grass is gone and we’re staring at bricks and mortar! When will it stop and what do we have to do to stop it???