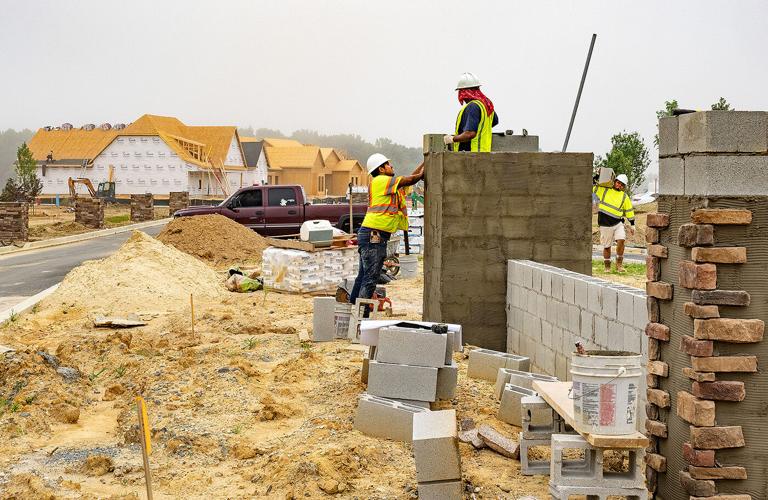 Masonry workers build an entrance structure at the Lakeside development in Trappe, MD. 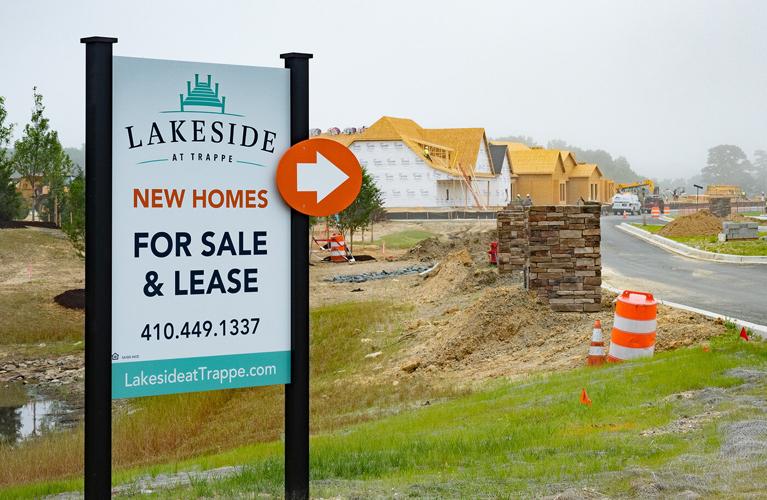 Construction is underway at Lakeside, a large mixed-use development in Trappe, MD.

The dispute over a proposed massive development on Maryland’s Eastern Shore is back in court.

Eleven Talbot County residents and a nonprofit group formed by one of them have sued the Maryland Department of the Environment. They accuse the agency of violating state law by letting construction proceed at the Lakeside development in Trappe after the county planning commission withdrew its approval.

The residents and Talbot Integrity Project contend that MDE should have revoked a permit that allows the first 120 homes at Lakeside to pipe their wastewater to the town’s outdated sewage treatment plant after the county planning commission rescinded its prior endorsement. The plaintiffs have asked the court to order MDE to effectively halt construction by revoking its permit.

The lawsuit contends that, under state law, MDE can only approve sewer infrastructure changes for new development if the local planning commission declares they are in line with the county’s long-range growth plan. The plaintiffs argue that MDE is breaking the law by ignoring the Talbot planning commission’s decision to revoke its support for Lakeside.

“All we want is for MDE to do the right thing for the environment [and] not add pollution to La Trappe Creek, which is already impaired, and to abide by and enforce the law,” said Dan Watson, the lead plaintiff.

The lawsuit, filed May 27 in Talbot County Circuit Court, is the latest skirmish in a long-running controversy over the planned residential and commercial project, which if completed could easily quintuple Trappe’s population of about 1,000 residents.

The developer wants to build 2,501 housing units and a small shopping center on 860 acres of farmland that Trappe annexed in 2003. But environmentalists and neighboring residents have objected to wastewater treatment plans for the development, worried that it could add to pollution already fouling the Choptank River.

The project already has had one round in court after MDE in 2020 approved the developer’s proposal to build a sewage treatment plant for the new homes and businesses and to spray up to 540,000 gallons of treated wastewater daily on meadows nearby. That site borders the headwaters of Miles Creek, a Choptank tributary that, like the river, is impaired by nutrient and sediment pollution.

Opponents, worried that nutrients in the wastewater could run off or leach into the creek, or that the spray could drift to neighboring homes, sued MDE over that plan. A Talbot Circuit Court judge ruled in their favor, finding that because the developer had altered the original wastewater plans, the public deserved another chance to comment on them.

State regulators then held a packed public hearing last October on the proposed permit, at which dozens of residents voiced their concerns. The Chesapeake Bay Foundation also presented a report challenging MDE’s findings that the orchard grass meadow would soak up all the nutrients in the sprayed wastewater.

Meanwhile, Watson had filed a petition with the Talbot County Council calling on it to rescind the local approval of the project. He argued that the large development doesn’t align with the county’s rural character or its long-range land use plan. He likewise wrote to the county’s appointed planning commission. Hundreds of residents supported his petition.

Opponents of the development raised new concerns in the fall when they realized that MDE had allowed the developer to pipe sewage from the first 120 homes to the town’s existing treatment plant, which discharges into La Trappe Creek, another Choptank tributary.

Critics pointed out that the town plant is old, has relatively lax treatment requirements and had pollution violations earlier in 2021. Water sampling by ShoreRivers in the summer of 2021 found algae blooms, elevated nitrogen and e. coli bacteria, an indicator of animal or human waste, in the creek downstream of the plant.

After receiving that information, the county’s five-member planning commission voted 3 to 2 last November to rescind its 2020 endorsement of the project. But the county council refused to go along with the commission and, in March 2021, narrowly rejected a resolution that would have altered its previous support of the development.

Watson said his opposition to the Lakeside development is “not a NIMBY thing.” He lives about 15 miles from Trappe on a different Bay tributary. Although he supports ShoreRivers and is concerned about water quality, he said he joined the opposition because he was “offended” by what he saw as “improprieties” in the development approval process.

He also noted that environmentalists and legislators accused MDE in the past year of being slow to catch pollution violations at a poultry rendering plant on the Eastern Shore and at Baltimore city’s two wastewater treatment plants.

“This is one more example of systemic failures at MDE in monitoring and enforcing and in this case permitting projects,” he said.

MDE spokesman Jay Apperson said the agency is still reviewing its final decision on the Lakeside developer’s application for a permit to spray the new community’s wastewater on adjoining grassy fields.

“The department will review any litigation regarding the permit application and respond appropriately,” Apperson said.

Talbot County voters should not elect new members to the County Council from either party who support developers like Rocks Engineering and projects as outrageous as Lakeside, like Messrs. Callahan, Divilio and Pack do. Councilmen even unwilling to hear a citizens’ petition without a lawsuit compelling them to do so. Councilmen who seem to back almost every money-making idea that will hurry Talbot away from the vision in our Comprehensive Plan of a rural community able to prosper and still retain our unique quality of life.

This article mentions “improprieties” in this development approval process. Not mentioned is the track record of “improprieties” associated with this northern Virginia-based developer, Rocks Engineering. The company founder, Ralph D. Rocks was sentenced to and served a Federal prison term after being convicted for bribery of a Prince George’s County Maryland elected official for illegal changes in zoning. Is this who we want developing in and destroying the rural character of Talbot County? Apparently three members of our Talbot County Council think so because despite the actions and advice to the contrary by the County Planning Commission and the Public Works Advisory Board, those three councilmen decided to ignore due process and pushed through the approvals needed by this developer. For some reason, helping this developer is a very high priority for those three individuals.