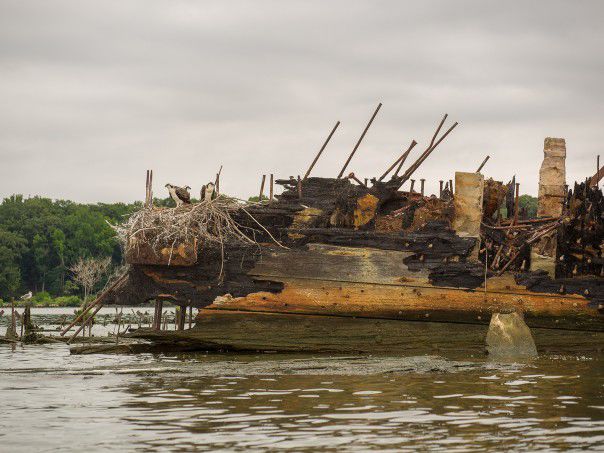 A pair of osprey made their nest on one of the Mallows Bay shipwrecks. 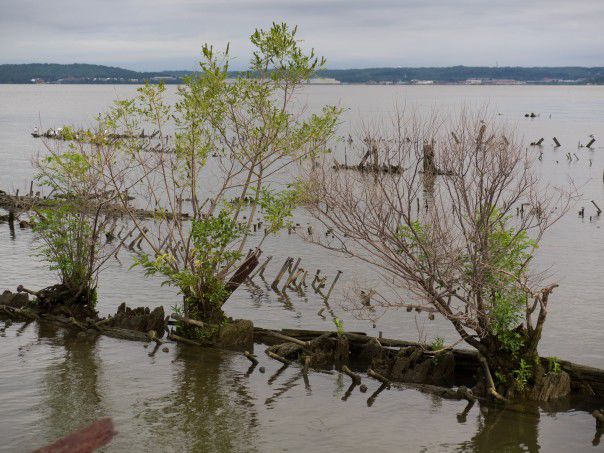 Submerged remains of century-old wooden vessels in Mallows Bay are most visible at low tide. 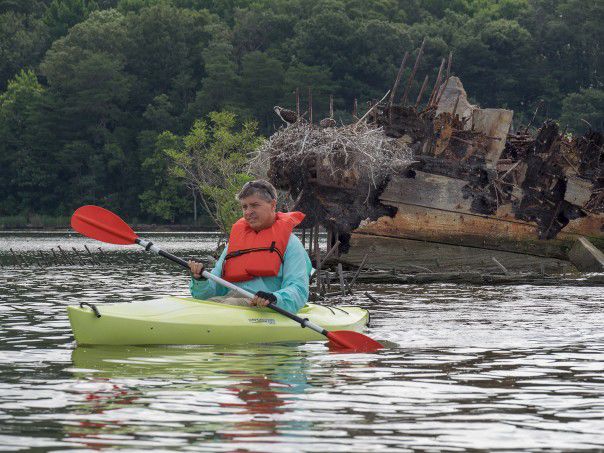 It’s been four and a half years since the state of Maryland asked the federal government to make Mallows Bay a national marine sanctuary to safeguard the final resting place of a “ghost fleet” of World War I–era ships as well as some even older relics.

Despite having broad support, the effort to protect this historic ship graveyard on the Potomac River south of Washington, D.C. has been stalled for a year as Gov. Larry Hogan seeks extra assurance that the state’s watermen won’t lose their ability to crab, oyster and fish in what would become federally protected waters.

The National Oceanic and Atmospheric Administration, which oversees marine sanctuaries, has repeatedly said that the agency is only interested in protecting the maritime artifacts in Mallows Bay and won’t meddle with fishing there.  But lawyers for NOAA and Hogan have been unable to reach agreement so far.  Advocates say they’re frustrated by the delay.

“This has been held up by the governor for a year now,” said Charlie Stek, chairman of a coalition of groups pursuing the marine sanctuary designation.  “It’s ridiculous. There’s such a tiny minority of people who’ve raised concerns here,” he added, asserting that “all their concerns have been addressed.”

Not so, countered Robert T. Brown, president of the Maryland Watermen’s Association. While recreational anglers, kayakers, conservationists, local officials and many others are enthusiastic about making Mallows Bay a sanctuary, Brown said he has yet to see an ironclad guarantee from NOAA that it will never invoke its legal authority to regulate or restrict commercial fishing in the proposed sanctuary.

“We want to maintain our livelihood,” he said. Though Mallows Bay itself is too cluttered with wreckage for most commercial fishing gear, the river above and below it yields sizeable catches of blue catfish, as well as blue crabs, striped bass and even some oysters.

Often described as the largest ship graveyard in the Western Hemisphere, the small bay on the Maryland shore of the Potomac holds the sunken remains of nearly 200 known vessels dating to the Civil War, though some artifacts found there go back 12,000 years. It’s best known as the watery crypt for more than 100 wooden steamships built to support the U.S. engagement in World War I. Finished too late to be used, they were deemed obsolete, towed to Mallows for salvage, and subsequently burned to the waterline.

The site was put on the National Register of Historic Places in 2015, not long after the state formally asked NOAA to make 18 square miles of the Potomac encompassing Mallows Bay a marine sanctuary. The nomination had widespread backing early on, including from sport and commercial fishing advisory groups. Many have extolled its historic and scenic qualities, others have called it a birdwatcher’s paradise and suggested it has the potential to be a prime magnet for outdoor recreation and tourism.

After an extensive review, NOAA announced in early 2017 that it was prepared to go forward but said its “preferred alternative” for the new sanctuary would cover 52 square miles of the river, almost three times larger than the state’s original request.

That drew enthusiastic support from most people and groups who weighed in during public meetings and the written comment period. But watermen in Maryland and Virginia rose up in vocal opposition, saying they’d been taken aback by how large the proposed protected area had grown. Noting that fishing is limited or prohibited in many other marine sanctuaries, they said they feared federal interference with their ability to earn a living on that stretch of water.

NOAA has repeatedly stressed that the sanctuary designation is intended exclusively to protect shipwrecks and artifacts, and fishing can continue as it does now. Paul “Sammy” Orlando, NOAA’s liaison for the proposed sanctuary, said that pledge was written into a memorandum of understanding that’s been drawn up since 2017 in talks between the federal agency, the state and Charles County, MD, where the sanctuary is located. NOAA also agreed to go along with the state’s original proposal for an 18-square-mile area, which leaves out a few wrecks that the larger designation would have protected.

In early 2018, Orlando said, federal officials thought an agreement had been reached and were prepared to finalize the designation once the governor and Congress had an opportunity to review it, as the law requires.

Then, in March 2018, the governor’s chief counsel, Robert Scholz, got involved, Orlando said. The NOAA liaison said the agency's initial communications with Scholz involved familiarizing him with the federal marine sanctuaries law and what was planned in Mallows Bay.

“We’ve been doing that back and forth with him,” Orlando said, “and to a large degree a lot of what he’s asking for falls into the category of assurances on top of reassurances.”

Orlando said the memorandum of understanding outlining the plan for the sanctuary makes clear that it is solely for protection of historic wrecks and artifacts,  and that NOAA intends to leave all management of fisheries and other natural resources in the area to Maryland's Department of Natural Resources and to the bistate Potomac River Fisheries Commission.

However, Brown and other watermen point out that NOAA has authority under federal law to limit fishing in marine sanctuaries. And while the agency says it won’t exercise that authority in Mallows Bay, they fear that could change in the future, because sanctuary management plans get reviewed and renewed every five years.

Scholz referred questions to the governor’s communications office. Michael Ricci, Hogan’s communications director, declined to discuss the “back and forth,” as he put it. He said the Hogan administration “strongly supports the designation, and our counsel is working closely with NOAA on the final details.”

Pressed to explain the state’s position, Ricci added: “The governor’s office is seeking protections for the state from potential federal overreach in Mallows Bay, including opt-out clauses.”

Advocates for Mallows Bay say the governor’s lawyer has pressed NOAA to give the state the right to revoke the marine sanctuary status up to 15 years after its designation.

NOAA agreed two decades ago to include an opt-out clause in its designation of another marine sanctuary, Thunder Bay on the Michigan shore of Lake Huron. Like Mallows Bay, it was designated solely for the purpose of protecting a cluster of shipwrecks that had occurred there. But it faced significant opposition from commercial fishermen, charter boat captains and scuba divers fearful that NOAA would not keep its word and interfere with them; one town even voted against the sanctuary proposal in a referendum.

In the case of Thunder Bay, NOAA granted the state a chance to pull out when the sanctuary management plan came up for review after its first five years.  By that time, concerns had eased, and some outspoken opponents have since become vocal supporters.

Advocates say they think Mallows Bay is different because it enjoys broader support. Even so, they say they’re willing to go along with the precedent NOAA set and offer a five-year opt-out in this case. But they object to extending that to 10 or 15 years.

“Overall, I think it’s a bad precedent for land and water conservation efforts,” said Kristen Sarri, president and CEO of the National Marine Sanctuary Foundation, a nonprofit advocacy group.    “It doesn’t show the state is willing to invest in the site. If that’s the situation, it’s hard for others to want to invest.”

Some investments have already been made, and activities begun to promote Mallows Bay as a sanctuary.

Last year, for instance, Sarri’s foundation gave the state a $62,500 grant to place a buoy in Mallows to do continuous water quality monitoring there.  Charles County has a park on the shoreline and has offered guided kayak tours of the wrecks, as have other organizations.

On behalf of her organization and more than a dozen others, Sarri wrote Hogan, NOAA and some of Maryland’s congressional delegation in March calling for Mallows Bay’s designation without further delay.

“It’s well past in our minds the time for a decision,” Sarri said in an interview. “A lot of this lies with the governor’s office because this is a community-driven process, so NOAA has to be and is being respectful of what the state wants to do. The groups that want to see this designation are wondering why the state is not taking action.”

But Brown, the watermen’s association president, said he remains opposed to the proposed sanctuary as it stands now.

Joel Dunn, president and CEO of the Chesapeake Conservancy, has also been an ardent advocate for the sanctuary. His group, in partnership with others, produced a downloadable paddler’s guide to the wrecks and wildlife  in the area.  It’s also posted online a map of three paddling itineraries, plus a series of virtual reality tours of the site.

Dunn said he sees the sanctuary proposal as “a huge opportunity for the state of Maryland to celebrate its Chesapeake culture and wildlife.”  He added that he believes it would be “a huge tourism draw” and generate visitor spending for Charles County and other neighboring localities.

“I want to encourage them to keep working on it,” he said of the lawyers for NOAA and the governor. “And I think it’s just such an enormous opportunity, it would be a shame to miss out.”