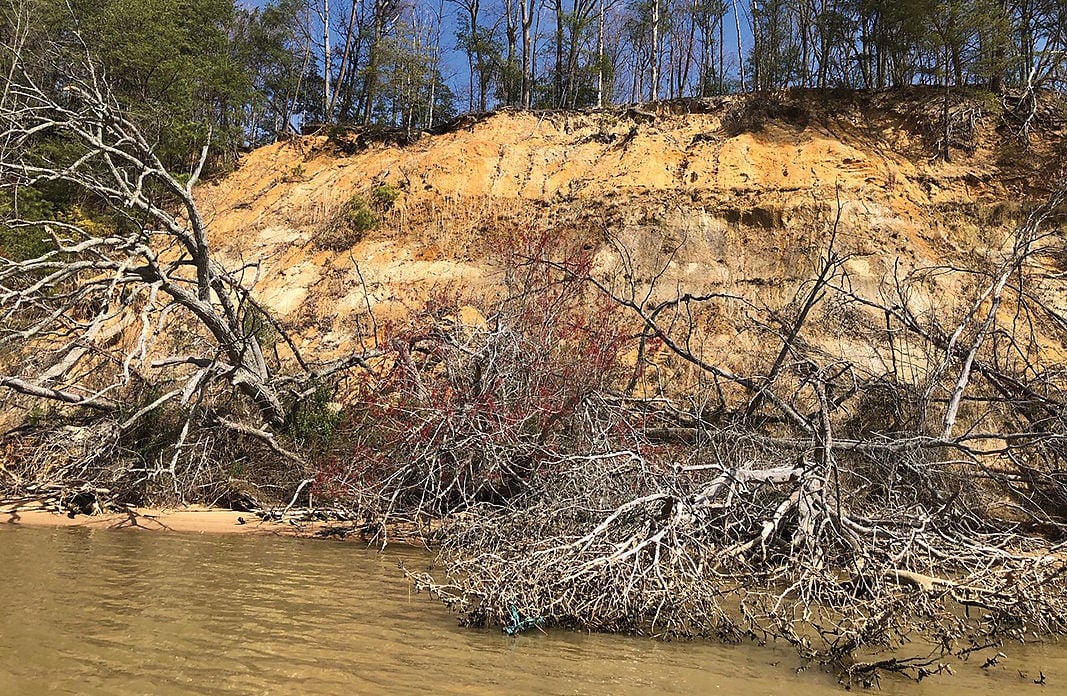 A photo taken on March 14, 2020, shows the shoreline of the Fones Cliffs property owned by Virginia True Corp., a developer that has filed for bankruptcy and is now facing a fine from Virginia regulators. 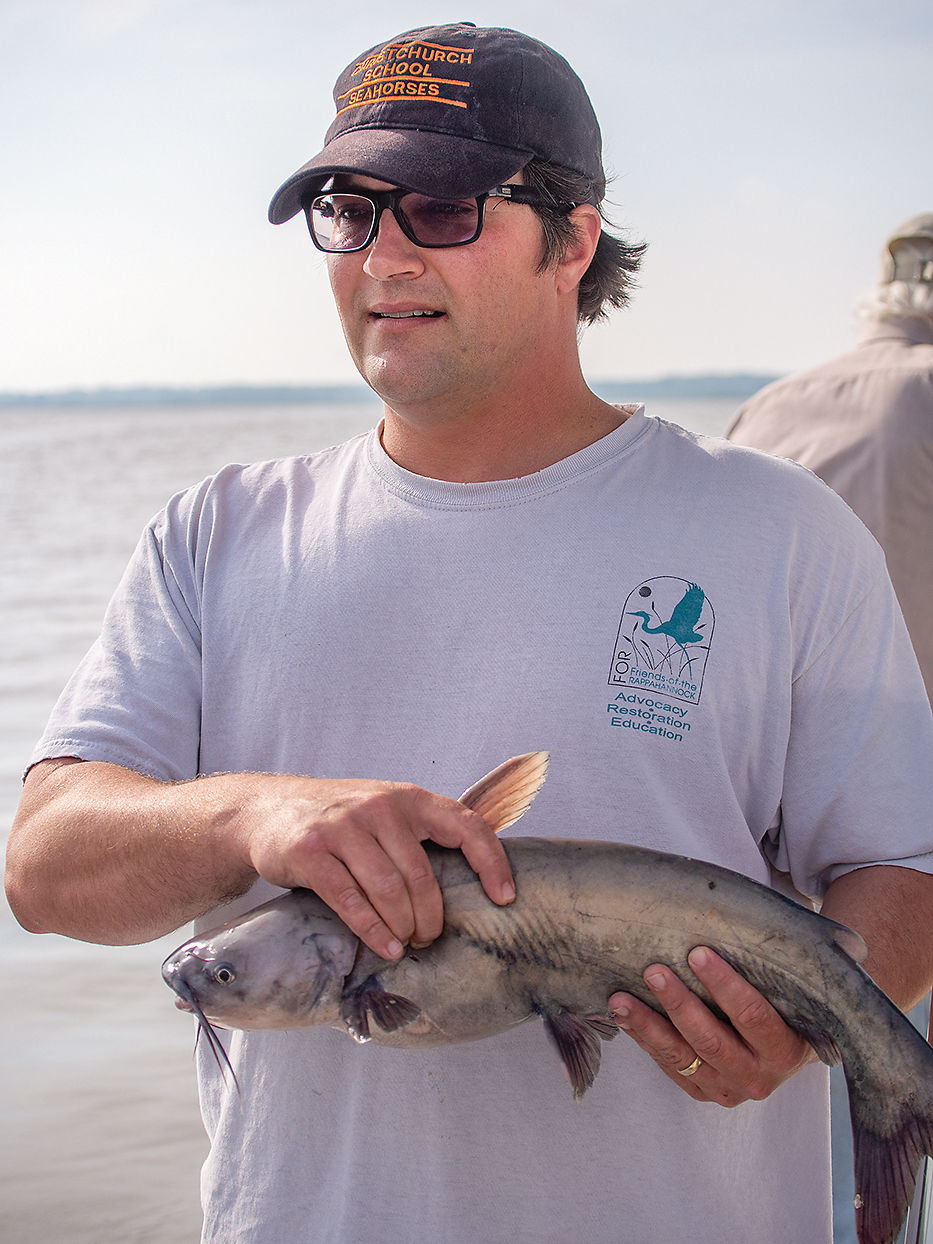 Richard Moncure, who regularly boats by Fones Cliffs as the tidal Rappahannock River Steward for the Friends of the Rappahannock, said he “absolutely” sees ongoing sediment pollution from the Virginia True property. (Dave Harp, 2014)

Environmental regulators in Virginia plan to levy a $200,000 fine against Virginia True Corp., the developer of a property along the Rappahannock River’s Fones Cliffs. But conservation groups say the fine for illegally clearing trees from more than 13 acres of the property in 2017 is not steep enough to deter future violations and does not take into account new plans for the site.

And several ongoing court procedures call into question whether the fine will be paid at all.

The proposed consent decree with the company directs that $125,000 of the fine fund an oyster restoration project in the Rappahannock River — but stops short of directly attributing a 2018 landslide on the cliffs to the unpermitted land disturbance.

Meanwhile, the New York-based Virginia True Corp., which filed for bankruptcy last year, has laid out in court documents an entirely new plan for the nearly 1,000-acre site known for its striking 100-foot cliffs and bald eagles. Intended to attract new investors, these plans would replace a golf course and housing development with a combination of federally funded housing, a hotel and luxury condos in 10-story towers near the cliffs. The cost for the first phase of construction would exceed $83 million, according to court documents.

In their comments filed on April 3, each of the environmental groups took issue with this aspect of the consent decree, arguing that the bankruptcy court could easily nullify the consent decree and its penalties. That court’s next hearing is currently scheduled for May 5.

Peggy Sanner, Virginia executive director and senior attorney at the nonprofit Chesapeake Bay Foundation, wrote in her comments that the fine should be recharacterized as an “administrative expense” of the bankruptcy estate, which would give the debt a priority treatment under bankruptcy code.

Sanner also thinks the consent decree should require Virginia True to plant trees to compensate for those it cut down. The oyster restoration called for in the consent decree could still continue as “remediation for the environmental damage,” she said.

“Our proposal,” Sanner said, “is to, as a minimum, get the treatment of these enforcement obligations correctly characterized in the bankruptcy proceeding so there is the best opportunity to take care of erosion issues.”

The Chesapeake Conservancy and Friends of the Rappahannock also submitted comments to the DEQ requesting that reforestation of the property be required. The friends group suggested that $500,000 would be a more fitting amount to fund an oyster restoration project that would help remediate the damages at Fones Cliffs.

In its letter to DEQ, the Chesapeake Conservancy said the $200,000 fine included in the latest consent order is not high enough to deter future violations. The Conservancy’s CEO Joel Dunn wrote in comments that the fine is low enough to be written off as “the cost of doing business” by a company that plans in its bankruptcy filings to spend $83 million on the next phase of construction at the site.

Local conservation groups have opposed the development project in an otherwise rural portion of Virginia’s Northern Neck since the rezoning of the property was first proposed to the Richmond County Board of Supervisors in 2015. But the board approved the changes to accommodate the proposed project, which vowed to boost local tax revenues.

The board had in 2012 also rezoned an adjacent property along the cliffs, known locally as the Bowers tract, for development into residential units. In a surprising turn of events — after more than a decade of wrangling over the property — the U.S. Fish and Wildlife Service purchased the 252-acre property last year for conservation. The property’s forests, fields and deep ravines are being added to the more than 9,000 protected acres that make up the Rappahannock River Valley National Wildlife Refuge.

Conservationists hoped the purchase would persuade neighboring landowners, such as Virginia True, to consider conservation options, too.

Still more concerns circle Virginia True and the Fones Cliffs site: Legal maneuvers are under way that could shift ownership of the company or the property and leave Virginia True without assets to pay the state fine.

One dispute directly challenges land ownership. Allan Applestein owned the property from 1958 until 2017, when he sold it to Howard Kleinhendler, who was his lawyer at the time. New attorneys for Applestein, who is now 88 years old, have alleged in a malpractice lawsuit that Kleinhendler took advantage of the elderly man who had advancing Alzheimer’s disease at the time of the sale.

Kleinhendler also structured the sale to Virginia True, the lawsuit alleges, to be a seller-financed transaction. That meant Applestein received $5 million for the sale at closing with the remaining balance of $7 million to be financed through a loan — with an unsecured promissory note. Because that note was unsecured, the debt to Applestein may not be paid because of  Virginia True’s bankruptcy proceedings. The lawsuit alleges Applestein would not have allowed the loan to be unsecured had he been in a better state of mind.

Neither Kleinhendler nor his lawyers could be reached for comment.

Meanwhile, a pair of investors in Virginia True, Anthony and Domenick Cipollone, have filed objections to the company’s plan to reorganize and attract new investors. Their suit in Richmond County Circuit Court seeks to enforce the terms of a contractual agreement they have with Kleinhendler.

“If either of those cases are successful, ownership of the site will be transferred from [Virginia True] to” Applestein or the Cipollones, Sanner wrote in her comments. If that happens, Virginia True “will have no assets to comply with the terms of the consent decree with DEQ.”

The Bay Foundation recently hired a third-party consulting firm to quantify how much damage occurred to the cliff and local water quality when a swath of the crumbly earth sloughed off in 2018, and attached its findings to their comments on the consent decree. The clearing and cliff failure created conditions the environmental groups believe continue to contribute sediment to the Rappahannock River and Chesapeake Bay.

Rummel, Klepper & Kahl, LLP, the Baltimore -based engineering firm that prepared the report, used drone imagery, geology and rainfall data, and elevation models to calculate how much nutrient and sediment pollution the landslide along about 800 linear feet of riverfront contributed to the waterway. The firm found that about 28,000 tons of soil — which would weigh as much as the Statue of Liberty — had been lost from that portion of Fones Cliffs.

The firm also calculated that soil loss from Fones Cliffs has contributed almost 37 tons of total nitrogen — one of the main pollutants plaguing Bay waters — to the river, in addition to phosphorus. It estimates that Virginia will now need to reduce nutrient loads to the river by approximately 10% to make up for the cliff-related nutrient surge if it is to still meet the state’s share of Bay cleanup goals by 2025.

Richard Moncure, who regularly boats by the site in his role as the tidal Rappahannock River Steward for the Friends of the Rappahannock, said he “absolutely” sees ongoing sediment pollution from the Virginia True property.

“There is groundcover up there, small trees, but you’re still able to see the channelization in areas and sediment from the top of the cliffs forming beaches at the bottom,” he said. “I would call it an active scar at this point.”

DEQ spokeswoman Ann Regn said the Virginia True property was considered in compliance in October 2018 but, during an inspection in May of 2019, a small area of the property was found to need additional stabilization.

“Since our September 2019 inspection, all reports have been marked compliant, and the site has remained in compliance,” Regn said. “DEQ is currently waiting for the bankruptcy court’s approval, which may be delayed by the recent pandemic.”

The DEQ already requires regular reports from a stormwater compliance manager hired by Virginia True. The latest report from March 27 found the sediment and stormwater conditions at the site to be “in satisfactory condition.”

Richmond County Administrator Morgan Quicke said Virginia True’s alternative development plans for the site have not yet been brought to the county, which must approve them. He said past problems at the site would make any future zoning approvals “that much more difficult.”

The new plan is contingent on more than the bankruptcy court’s approval. Plans submitted to the court in January assert that construction of housing for seniors, veterans and future employees working at the site would all be funded by the U.S. Department of Housing and Urban Development.

The documents, submitted by James Fukuda, a freelance consultant hired by the company to attract investors, say the idea has already attracted interest from a handful of New York-based investors.

In addition to the housing, the plan calls for working with the Dream Hotel Group on a Chatwal Hotel similar to one the company runs in New York City’s theatre district.

This project would be built near the cliffs in conjunction with luxury condominiums contained in four to five 10-story towers.

“The views from the Rappahannock River and surrounding areas from these condos will be magnificent,” states the document submitted by Fukuda.

The environmental groups who have commented on the consent decree say they would still like to see the property along the historically significant stretch of cliffs become conserved.

“Fones Cliffs remains among the Conservancy’s highest priorities for conservation in Virginia,” the Chesapeake Conservancy’s Dunn said. “We continue to track the legal jostling… which will likely determine the future of this iconic property.”