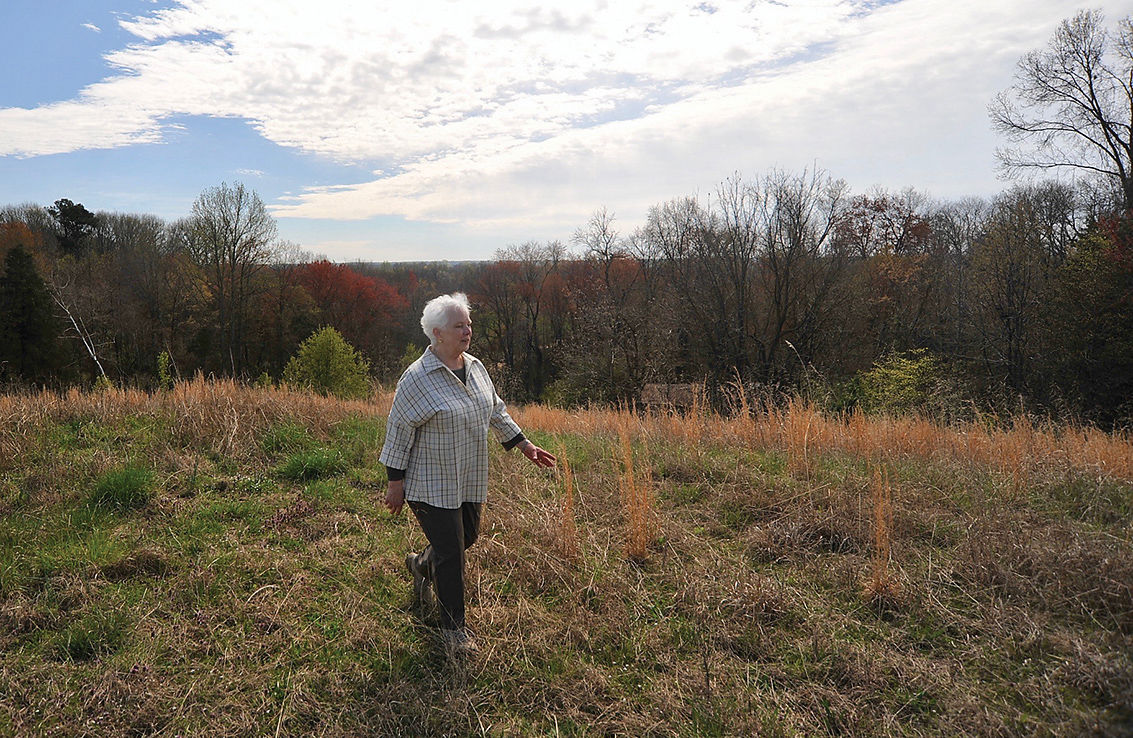 Lucy Harman walks along a high point on the Virginia property where her daughter, Sally Harman, married her husband George Harvey not long ago. “But both of my grandparents’ farms are subdivisions now in Fredericksburg,” Harman said, “and I just didn’t want that to happen to the one piece of land I have control over.” 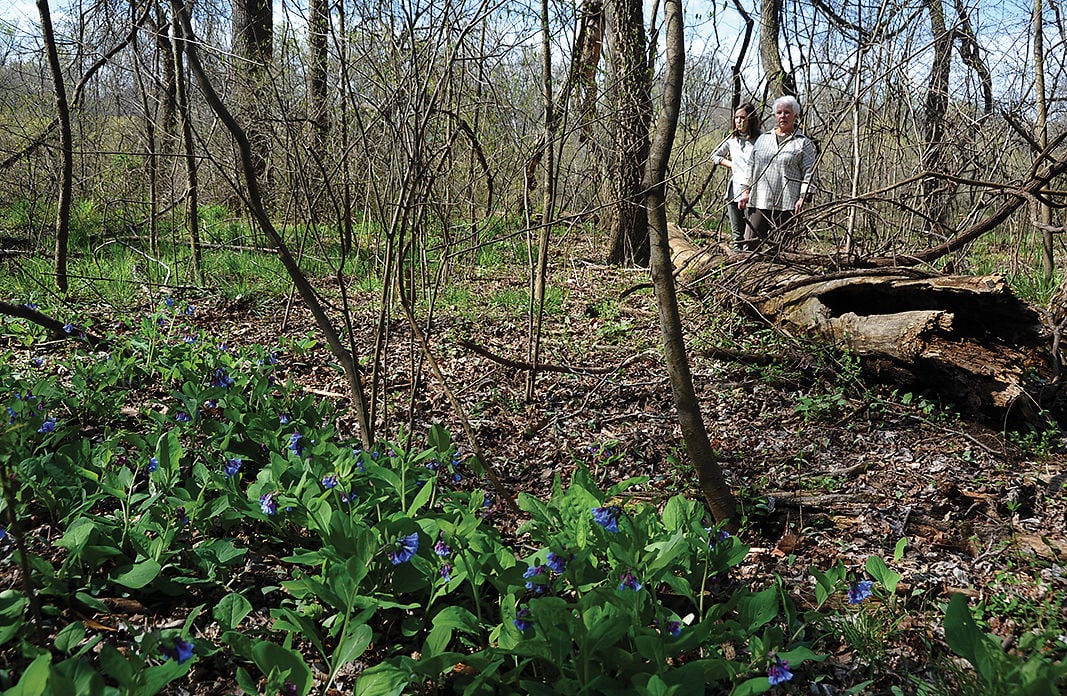 Lucy Harman and her daughter, Sally, walk the wooded area of their property.Alan Rowsome, the Northern Virginia Conservation Trust’s executive director, noted the mix of woodlands, farmland and river access on the Harman family property. “This property kind of has it all,” he said. “You don’t usually see all of this in one place.” 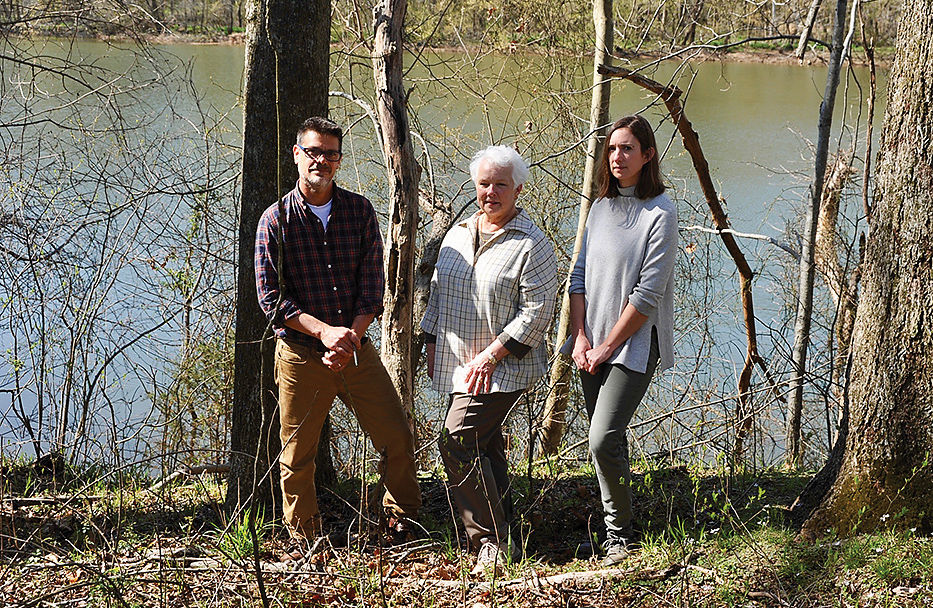 Lucy Harman, center, and her family recently conserved a 216-acre property along the Rappahannock River in Stafford County, VA, where her daughter, Sally Harman, at right, and son-in-law, George Harvey, at left, live and run a landscaping business. The property includes some of the top agricultural soils in the state, hardwood forests and wetlands along a mile of shoreline.

When the Goodloe family bought a bucolic, 216-acre property in Stafford County, VA, officials were planning to build a beltway around the bustling nearby city of Fredericksburg. That made the land purchase along a major traffic artery a fitting financial decision — especially for a family in the business of laying asphalt.

But that beltway was never constructed and, nearly 25 years later, the Goodloes have come to value the land that makes up Snowden Farm for more than its development potential. Late last year — in a move the matron of the family asphalt business found a little ironic — the Goodloes had the property protected from development through an easement with the Northern Virginia Conservation Trust.

“I’m a native Virginian,” said Lucy Harman, who owns the property with her two sisters and ran the asphalt company their father and grandfather started after World War II. “But both of my grandparents’ farms are subdivisions now in Fredericksburg, and I just didn’t want that to happen to the one piece of land I have control over.”

The property along an oxbow of the Rappahannock River includes not only some of the top agricultural soils in the state — leased for years to local farmers — but also hardwood forests and wetlands along a mile of shoreline. A single parcel since the 1600s, the land has also been a backdrop to Civil War history and American Indian life, according to records and artifacts.

“This property kind of has it all,” said Alan Rowsome, the trust’s executive director. “You don’t usually see all of this in one place.”

For that reason, the land would have ranked high on any conservation priority list, including one recently launched in Virginia. In 2019, the state rolled out a living “smart map” that layers 19 sets of conservation priorities — from agricultural lands to cultural resource locations — onto one searchable platform.

Neither state nor county funds were needed to conserve the Goodloes’ land. They didn’t want to sell the property, where Harman’s daughter and her husband live. But they could use the tax benefit of a conservation easement, which is a voluntary legal agreement that permanently limits uses of the land.

Such a tax benefit was particularly attractive to the Goodloes in 2019, the year several family members saw a boost in their taxable income from selling the asphalt business, P.C. Goodloe & Son, Inc. Harman said she would have conserved the property anyway, because “it was just the right thing to do.”

“But it was sure wonderful to get that tax benefit,” she said.

Rowsome said it’s not uncommon for land trusts like his to get frantic calls from landowners in the fourth quarter of a year wondering if they can get an easement completed by the end of it.

“If people hem and haw, it can take six months,” Rowsome said. “It can take six weeks if everyone is ready to make it happen, and that’s what happened in this case.”

The land trust holds 114 easements in Northern Virginia, where development pressure has spread down the Interstate 95 corridor as population growth expanded beyond the DC metro area. The Goodloe property is the trust’s fourth easement in Stafford County, which has recently become a frontline for development pressure in the region.

Stafford County’s Board of Supervisors is currently considering downzoning nearly 90,000 agricultural acres in the state to curb growth in rural areas and to mirror the zoning regulations of other more rural counties nearby. The change would limit development in those areas to one house per 10 acres instead of one house per three acres.

Stafford County Supervisor Mark Dudenhefer told The Free Lance-Star that the change needs to happen “right now” to prevent Stafford from becoming the next Fairfax County in the state, referring to the populous DC suburb. A public hearing on the zoning change is scheduled for May but could be delayed due to the coronavirus.

The county already has a purchase-of-development-rights program that allows a landowner to voluntarily limit development on the property in exchange for a one-time payment, with a limit on how many can be funded each year. Harman said that program had a long wait list when she looked into it in 2019.

Rowsome said land conservation advocates recommend all of these programs as options to property owners. Rather than waiting for property owners to come to them, the trust is taking steps similar to the state's by identifying lands they’d like to see conserved, then reaching out to the owners.

“As valuable as this is to protect, it will end up being an island of conservation if we don’t protect the rest,” Rowsome said. “There’s a lot riding on people like Lucy talking to their neighbors and saying, ‘This worked for me.’ And it’s a lot better coming from her than us.”

For her part, Harman said she’s already been spreading the word. One of the first people she told about the conservation easement was a former mayor of Fredericksburg, Bill Beck, who had suggested the family conserve the property soon after they bought it.

“I told him that we bought it as an investment and he said, ‘Lucy, I don’t want to see one more square inch of asphalt in this state,’” Harman said, laughing. “I said, ‘Do you know what I do?’”

That the family has now decided to conserve the property “does seem like an irony,” Harman said. “People don’t think it’s possible to be a developer and still do this.”

But Rowsome said such seeming dichotomies are not uncommon in the conservation community. People who have built businesses by tapping natural resources often develop an outsized appreciation of the land and all it offers.

The land in this part of the state is rich in sand and gravel deposits just below the surface. That was also true at the Snowden Farm property, where the family mined a 30-acre swath for those materials for several years.

“Almost every farm from here along the river has been mined for that,” Harman said. “This was one of the last farms to be mined, actually.”

Trust officials were hesitant about the mining, which had ended a couple years before they set foot on the property. But Rowsome said they and state officials were pleasantly surprised by the relatively low-impact use of resources. All that’s left of the operation, which was safely closed by the state, is a section of one field that sits about 15 feet lower than the rest of the surface. Vegetation and small trees have grown back, and there are plans to raise the surface and return it to agriculture in the future.

Not lost to history

Snowden Farm, like many conserved properties, had come close to being developed. A previous owner, Katherine Gouldin Woods, had written in her will that she wanted the land donated to a nonprofit organization and protected. But after she died, the deal fell through and it was sold at auction to a developer. That developer knew the property had sand and gravel deposits that Harman might be interested in and sold it to the Goodloe family.

“Part of the story is how many of these [places] we don’t get to conserve,” Rowsome said to Harman during a visit to the property in early April. “I don’t know how many moments in history there were where this property could have been lost.”

During the Civil War, the property was home to John Seddon, the brother of the Secretary of War for the Confederacy, James Seddon. Union troops passing through the area believed the home — one of the two largest in the county at the time — belonged to the secretary and burned it to the ground. James Seddon and his family barely escaped to a nearby laundry building, according to a book written by a local historian.

Harman’s daughter, Sally Harman, married her husband, George Harvey, on a high point near the entrance of the property where the couple now lives and runs a landscaping business. Avid naturalists, they make good guides to the farm’s diverse natural offerings. They also keep tabs on the property, 130 acres of which is farmed by another local family.

On a walk through the woods not far from the shores of the river, they meandered through a bevy of Virginia bluebells mingling with a carpet of spring beauties in early-April bloom. The bottomland hardwood forest, framed by a deep oxbow in the river on one side, also is home to some wetlands and surprising changes in elevation. Harman and Harvey have also counted 14 heron nests in a rookery in one part of the forest.

“We thought it was a beautiful property,” she said. “And it felt like an investment in the future.”