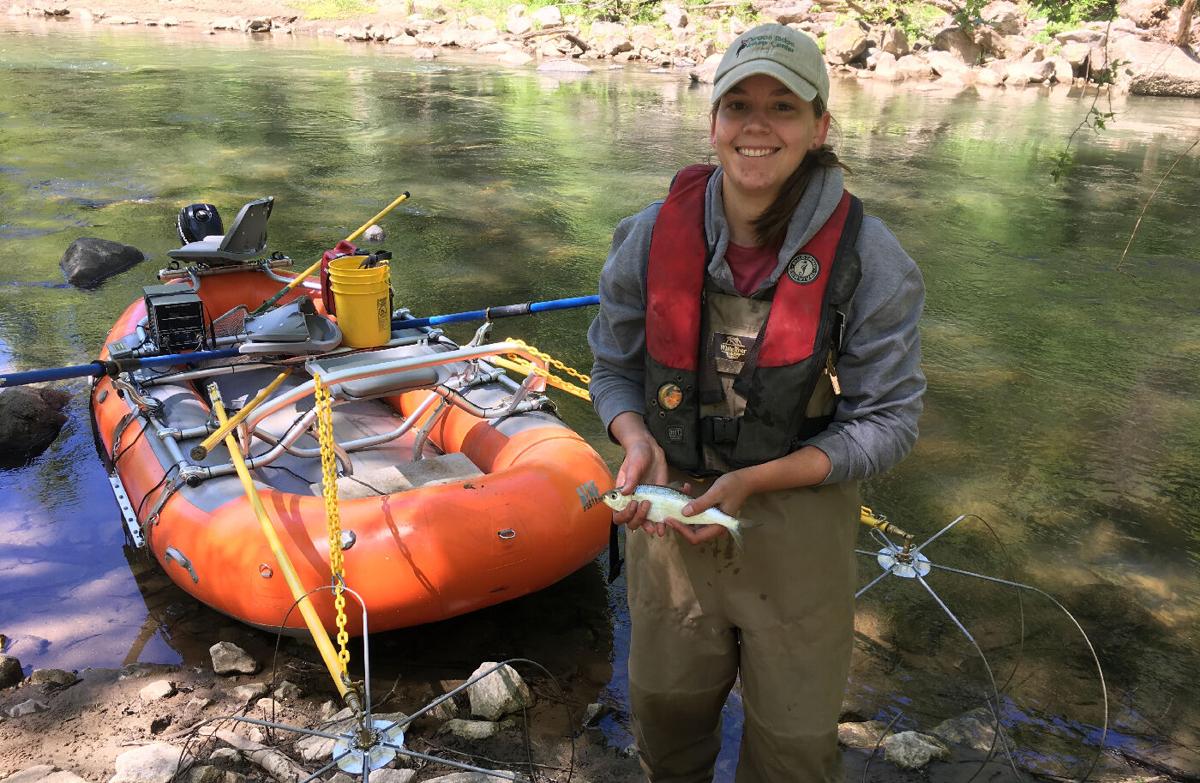 Biologist Mary Genovese holds a blueback herring found more than two miles upstream from the former site of Bloede Dam in Maryland’s Patapsco River. Until its demolition in 2019, the dam blocked river herring and other migratory fish trying to swim upstream in search of spawning grounds. (William Harbold/Maryland Department of Natural Resources) 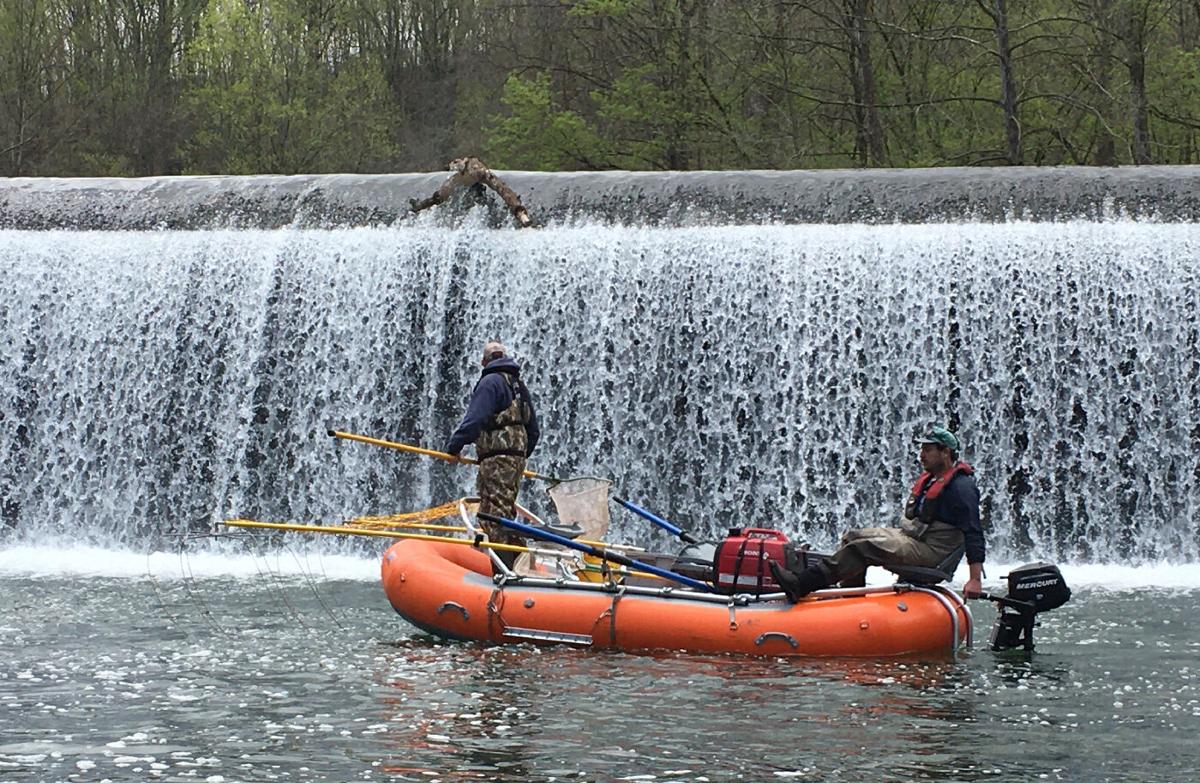 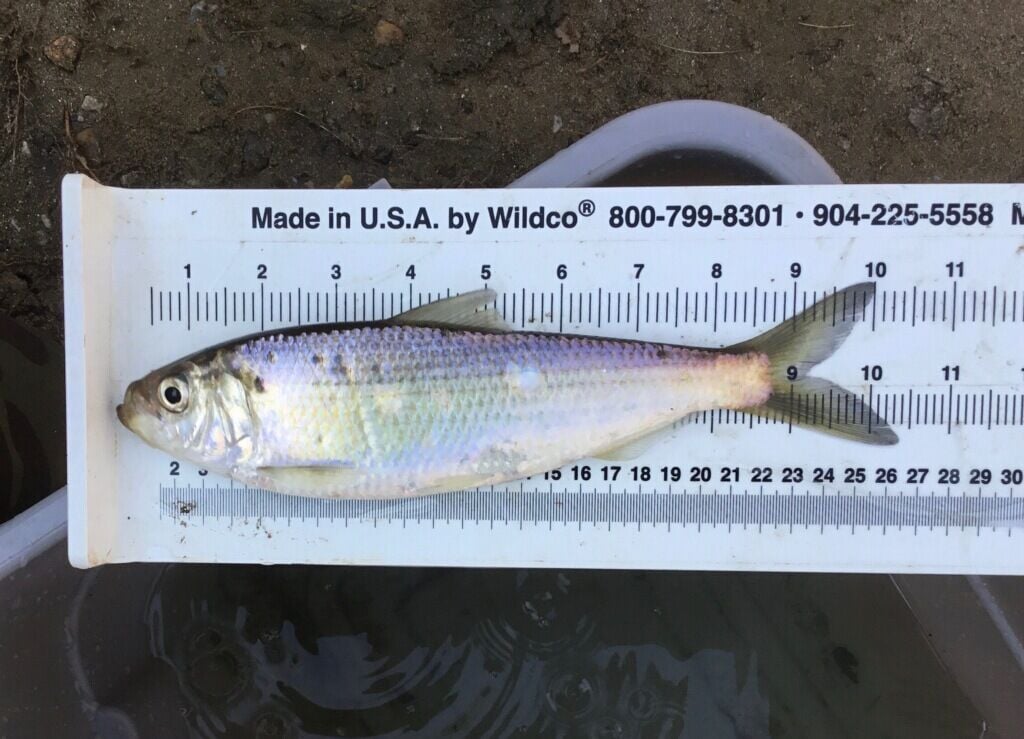 Biologists electrofishing the Patapsco River in March found this alewife, a migratory river herring, upstream of the site where Bloede Dam had blocked spawning runs for more than a century. (William Harbold/Maryland Department of Natural Resources)

This spring, William Harbold and his team of biologists with the Maryland Department of Natural Resources made a pair of thrilling discoveries in the Patapsco River southwest of Baltimore.

In late March, they retrieved an alewife, a thin silvery fish with a gray-green back and big eyes, near a railroad bridge at Ilchester Road in Howard County. Then in mid-May, they found a nearly identical-looking blueback herring near the old mill town of Ellicott City.

Those little fish, collectively known as river herring, may not seem much to get excited about. But they were the first physical specimens of their species to be found that far up the Patapsco in more than a century. From 1907 until three years ago, Bloede Dam had straddled the river 10 miles upstream from Baltimore, preventing migratory fish from getting farther upriver to spawn. American eels also were blocked.

Physical structures like dams that hinder or block the movement of migratory fish to their historic spawning grounds are a major factor in the decline of river herring, American shad and other anadromous fish species, which spend most of their lives in saltwater but return to reproduce in fresh water. Restoring access to spawning habitat for migratory fish and eels is a goal of the 2014 Chesapeake Bay Watershed Agreement, though it’s one that has a long way to go.

Bloede Dam, built in 1906–07 by a private company to supply electricity to Catonsville and Ellicott City, ceased generating power in the 1930s. A fish ladder installed at the dam later to help fish and eels get by proved ineffective. But its location in heavily used Patapsco Valley State Park made it attractive to swimmers — and dangerously so, with nine drowning deaths reported there since the 1980s, according to the DNR, which became the dam’s owner.

Its removal was the linchpin in a long-term plan to restore 65 miles of fish and eel habitat in the Patapsco. Two smaller dams upriver had been taken out earlier — the Union Dam in 2010 and Simkins Dam in 2011.

So, in September 2018, a contractor breached Bloede Dam with an explosive charge. Over the next year, heavy equipment broke up and removed the rest of the concrete and steel structure that had at one time stood 34 feet high and 200 feet long.

The big question: After spending $17 million in mostly federal funds to un-build the dam, would the fish and eels come upriver?

There were plenty of river herring showing up every spring downriver of the dam before it was demolished. The DNR had for a few years stocked the lower Patapsco with hatchery-spawned river herring. But they stopped after seeing how many wild fish were returning each spring to spawn. “There were so many herring in the river that we weren’t making any impact,” said Chuck Stence, who runs the DNR’s anadromous fish program.

The DNR team began checking for new arrivals upriver after the dam was removed. They used electrofishing gear, which stuns the fish long enough that they float to the surface, where they can be identified and counted before they recover and swim off.

“We got proof [almost immediately] that at least fish could pass upstream,” Harbold said. In 2019, even before all of the demolition work was finished, DNR biologists caught two other types of migratory fish — gizzard shad and white perch — at the base of Daniels Dam, about eight miles upriver of the Bloede site and the last major obstacle to a free-flowing river.

But for the first two years after Bloede’s removal, the DNR team did not spot river herring at any of the three sites they sampled. And this spring, the DNR team found only a single male alewife and blueback herring, without finding any females with which they could spawn.

“I kind of worried about that,” Harbold said, “those poor lonely fish all by themselves up here.”

But trying to count fish using nets or electrofishing is a challenge, because the gear’s reach is so limited and the fish are so mobile that they can easily pass undetected. Harbold noted that electrofishing only covers a stretch of stream two to three meters long, and they do it only once a week.

However, biologists with the Smithsonian Environmental Research Center in Edgewater, MD, have picked up indirect evidence that river herring are starting to move upstream,  though evidence of spawning is still lacking.

The SERC scientists began collecting water samples from the river and analyzing them for environmental DNA, or eDNA, which is genetic material unique to a given species  that’s shed into the water via blood, skin, mucus or feces.

“In 2019, we detected river herring [DNA] all the way up to the base of Daniels Dam,” said Matt Ogburn, an ecologist at SERC. The concentrations weren’t “super-high,” he noted, and scientists haven’t yet figured out how to translate eDNA levels into numbers of fish, so it’s hard to say how many were getting that far upstream. But even so, Ogburn concluded, it’s strong evidence that at least some herring were doing so.

To check for spawning activity, biologists have been deploying nets in the water to catch fish eggs and larvae drifting downriver. They didn’t find any for river herring in 2019, Ogburn said, and data from 2020 and 2021 are still being analyzed.

“A lot of us feel like there’s viable spawning habitat up there,” he said of the Patapsco above Bloede. “The question is how much actual spawning is going on.”

River herring have been seen lurking in deeper water and in riffles with cover, such as overhanging trees or logs. Biologists believe expanding spawning habitat should help rebuild the river herring population, but, at least at first, it may not help if the fish are more spread out. Ogburn said he thinks the fish will still manage to find each other, but that’s one of the questions he hopes to keep studying in years to come.

Meanwhile, it’s clear that other Bay-roaming fish also are taking advantage of the chance to swim upriver, including at least one unwelcome invasive species.

“We’ve seen northern snakeheads all the way up to Daniels Dam,” Harbold said. “They’re not the ones you want to pass, but you get the bad ones with the good ones.”

I hated to see the dam go. I have visited it many times over the past 50 years, first with my mother and later with my son. Victor Bloede was my great grandfather, and his lovely daughter, who turned on the power many years ago, was my grandmother. It was nice to see something which he worked to build standing there. While it would have been nice for me to leave a piece of the dam standing, I understand. It is now only a memory.