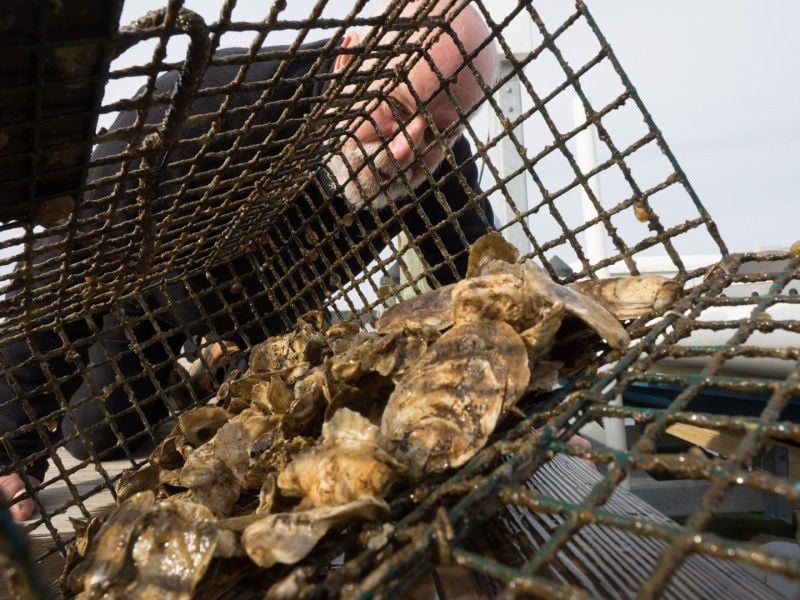 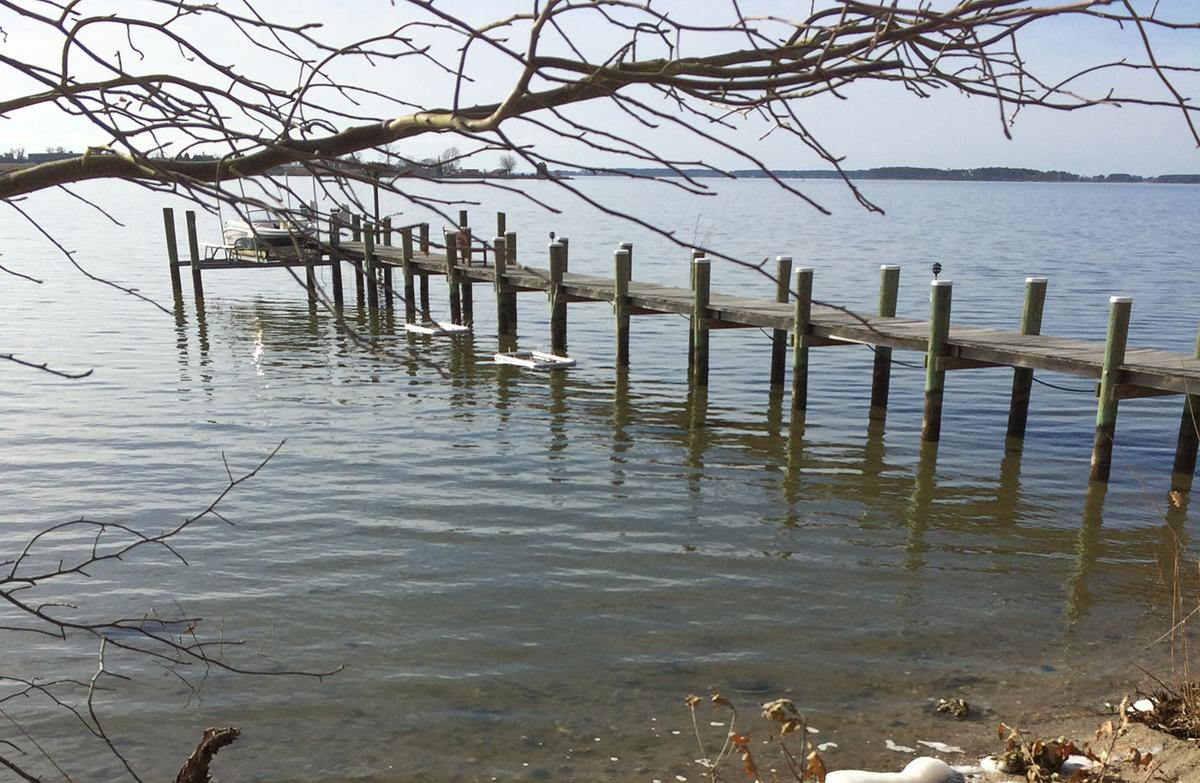 A water sample that a local resident collected from St. Inigoes Creek in Southern Maryland contained elevated levels of PFAS, a family of “forever chemicals” that have caused widespread contamination. 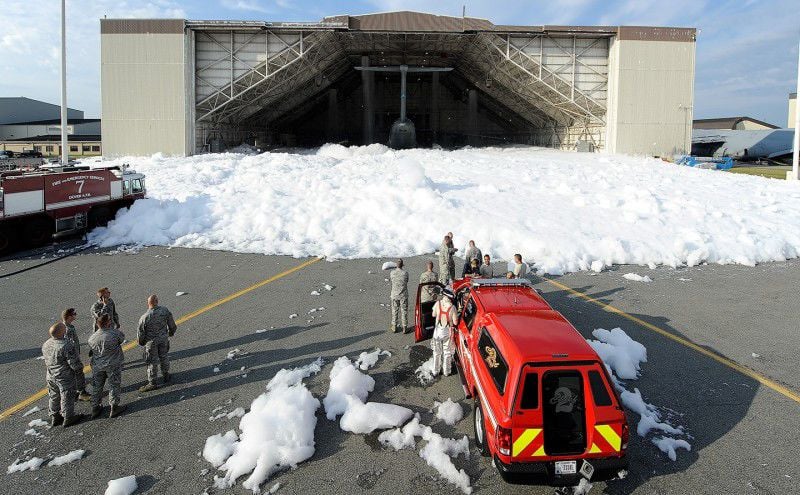 PFAS have been found contaminating groundwater at or near a number of airports and military air bases that use or used PFAS-containing foam to suppress fires. In this 2013 photo, a fire crew at Dover Air Force Base in Delaware responded to a massive inadvertent foam release from a hangar fire suppression system. (US. Air Force photo/Greg L. Davis) 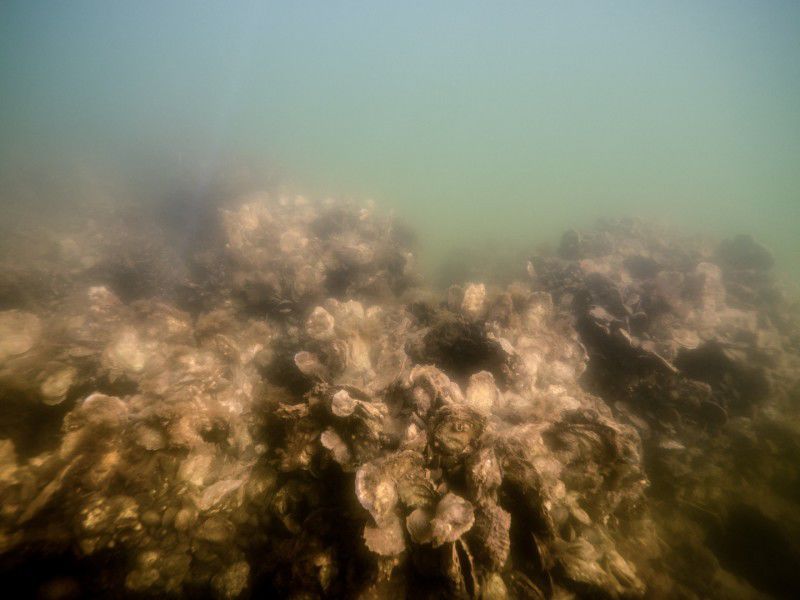 Oysters grow on reef in sanctuary in St. Mary's River in Southern Maryland. 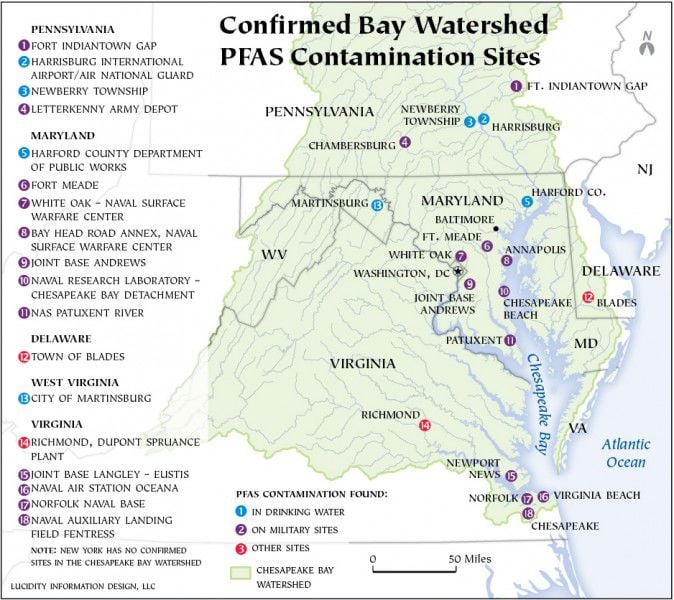 A new round of testing for “forever chemicals” in St. Mary’s County, MD, found “no levels of concern” in oysters or in the waters of the Chesapeake Bay tributaries where the shellfish were growing, according to state environmental officials.

Sampling done by the Maryland Department of the Environment detected no PFAS, or per– and polyfluoroalkyl substances, in oysters collected from rivers and creeks near Naval Air Station Patuxent River. Surface waters sampled where those oysters were growing registered what officials described as “very low” levels of the chemicals.

Some environmental activists, though, questioned the state’s interpretation of its findings — in part because they came up with somewhat different results from their own oyster testing. But they also note that what the MDE considers very low levels in water are well above PFAS exposure thresholds recommended in the European Union, and they question whether officials here are doing enough to identify and set safe standards for public health.

Working with the St. Mary’s River Watershed Association, the nonprofit group Public Employees for Environmental Responsibility reported that another lab it hired had detected low levels of three PFAS compounds in oysters collected in September from county waters.

Kyla Bennett, PEER’s science policy director, disagreed with the MDE’s assurances that there’s little health risk. She contended that the state’s testing was too limited, both in scope and sensitivity, to reach such a conclusion.

“I think we need to know more,” she said.

The varying test results come seven months after the Navy stirred public concern by disclosing plans to investigate PFAS contamination in groundwater at its airbase at the mouth of the Patuxent River and at Webster Field, an annex nearby on the St. Mary’s River. The groundwater contamination was believed to stem from the Navy’s use of firefighting foam containing PFAS compounds at those facilities.

Navy officials said they had no evidence that PFAS contamination had spread beyond its fence lines. But a local activist, Pat Elder, reported that a lab detected high levels of PFAS in water samples he took by his home along St. Inigoes Creek across from Webster Field.

The MDE subsequently announced plans to test water and oysters in St. Mary’s County as a pilot project toward developing a statewide PFAS testing program.

“The results from the St. Mary’s River pilot study provide valuable information as we move forward in future monitoring of PFAS to protect the environment and public health,” MDE Secretary Ben Grumbles said in a press release announcing the findings.

In widespread industrial and commercial use since the 1940s, PFAS can be found in common household products such as non-stick cookware, water resistant clothing, and personal care products. A family of thousands of chemical compounds — the number keeps growing — they’ve also been an ingredient in firefighting foams used at fire-training facilities, airports and military installations. PFAS do not break down easily, and they can build up in animals or organisms that ingest them, including people.

Sampling on both sides of the Bay

The MDE collected oyster samples in July and August at six locations in the St. Mary’s River and two sites at the mouth of the Patuxent River. One of those was Hog Point, where a 2002 research paper reported finding high concentrations of perfluorooctane sulfonate, or PFOS, in oysters collected there. PFOS is one of the more problematic PFAS compounds, showing up frequently in groundwater and drinking water supplies, often in association with use of firefighting foam at military installations.

For a comparison, the MDE also sampled oysters from Fishing Bay in southern Dorchester County. That site across the Chesapeake Bay was considered likely to have especially low PFAS contamination because of its sparse population and general lack of industry or commerce other than farming.

But the Fishing Bay oysters were the only ones with detectable PFAS, the MDE reported. The level measured there was 1.57 micrograms per kilogram, or 1,570 parts per trillion.

The MDE reported detecting PFAS levels in surface water samples from the St. Mary’s and Patuxent rivers and Fishing Bay that ranged from 2.3 to 13.5 nanograms per liter. The state report said those levels pose very low health risks for anyone exposed through recreational activities such as wading, swimming, fishing or boating. Those levels are also well below the U.S. Environmental Protection Agency’s lifetime health advisory for two PFAS compounds in drinking water of 70 parts per trillion — the only safe exposure ceiling the federal agency has developed so far.

But Pat Elder, the environmental activist who reported finding PFAS in St. Mary’s County surface waters, said the levels MDE found are far higher than what the European Union considers safe. The EU has called for a limit on PFOS in sea water, for example, of 0.13 nanograms per liter.

The watershed association and PEER commissioned a lab to analyze two oysters collected in the St. Mary’s River — one at a site near St. Mary’s College and the other from an area leased for raising oysters. The lab detected two PFAS compounds in one, but at levels too low to be precise, so the lab estimated the total concentration at a combined 1,000 parts per trillion. A third compound was detected in the other oyster, also at a level too low to pinpoint, but was estimated to be around 1,100 parts per trillion.

Jay Apperson, the MDE’s deputy communications director, said the results of the groups’ oyster tests were similar to the MDE’s, describing both studies as finding PFAS at levels so low they were at best barely detectable.

The MDE also noted that its latest findings are similar to those from an earlier round of sampling commissioned by the St. Mary’s River Watershed Association. The group reported detecting PFAS at very low levels in six of 10 sites sampled in the river and its tributaries.

Robert T. Brown, Sr., president of the Maryland Watermen’s Association, said he was concerned but not alarmed to hear that testing had detected PFAS in oysters. Brown, who with his wife operates an oyster aquaculture business in St. Mary’s County, said he was relieved to hear that oysters there “checked out all right” in the state’s view.

“So, I mean I’m just waiting to hear what … the scientists have to say about it,” he added, “but I’m glad to hear overall that our oysters are pretty safe.”

PEER’s Bennett contended there were shortcomings in the state’s testing that compromised its ability to thoroughly assess health risks. The Massachusetts lab’s capacity to detect low levels of PFAS compounds varied, she said. For example, she said, its testing wouldn't be capable of picking up one particularly troublesome compound even at levels of several thousand parts per trillion. Moreover, she said, the state only tested all its samples for 14 of the more than 8,000 known PFAS compounds.

The MDE’s spokesman said the state tested for the 14 compounds believed most likely to be present, and that some samples were tested for a larger suite of 36 compounds. But Bennett noted that the state did not test all of its samples for the three compounds that PEER’s testing detected.

The three fluorinated compounds picked up in the PEER oyster samples are newer ones, of which relatively little is known. Manufacturers say newer “short-chain” PFAS compounds are less likely to pose environmental or human health risks as those developed decades ago. But at least two of the older PFAS are still frequently found in water despite being voluntarily retired. And, Bennett said, one of the newer compounds detected in a St. Mary’s oyster is “showing up everywhere now,” including in artificial turf. One industry study found it to be toxic to lab animals.

“Given that they failed to test for all 36 [PFAS compounds] at all of their sites, given that detection limits by their nature are so high, up to 10,000 parts per trillion, to draw the conclusion that there’s low risk, I think it’s irresponsible,” she said.

“I would have been OK with this if they had said, ‘This is of concern, but we don’t know enough,’” she said. “When we’re talking about human health, we have to use the precautionary principle.”

Bennett said she wasn’t criticizing the state for the limitations of its testing, only for the conclusions it drew. With so many PFAS compounds in use and new ones being developed, states lack the funds and often the expertise to deal with them all, she said.

Rather, she faulted the industry for downplaying the risks and the EPA for being slow to tackle the issue and addressing only a relative handful of the thousands of compounds.

“We’re playing whack-a-mole with these chemicals and we can’t keep up,” she said. “The only way to get a handle on this is to regulate them as a class.”

Bob Lewis, executive director of the St. Mary’s watershed group, said he suspects PFAS traces can be found “pretty much everywhere” because they’ve been so widely used and are so persistent.

While saying he felt encouraged by the state’s assurance that there’s no reason to be concerned about eating St. Mary’s seafood, Lewis added, “At the same time, I think the public ought to know we found extremely low levels” of the chemicals in oysters the groups sampled.

Bennett agreed, saying the detection of PFAs in oysters on the Eastern Shore is also a concern.

”I would not want to eat something that’s got 1,500 parts per trillion of PFAS in it,” she said. “I believe the state has a moral if not a legal obligation to let people know this stuff is in the food they’re eating, and they can make a decision whether they want to eat it or not.

The MDE said it plans next to analyze fish tissue for the chemicals. That comes after the Upper Potomac Riverkeeper recently highlighted findings by the U.S. Geological Survey of PFAS levels averaging nearly 400,000 parts per trillion in the blood of smallmouth bass collected from Maryland’s Antietam Creek in 2018. The MDE said it expects later this year to begin sampling recreationally caught fish from several spots around the state.

“Until we start testing more widely around the Chesapeake, we really don’t know where the St. Mary’s fits in,” Lewis said.