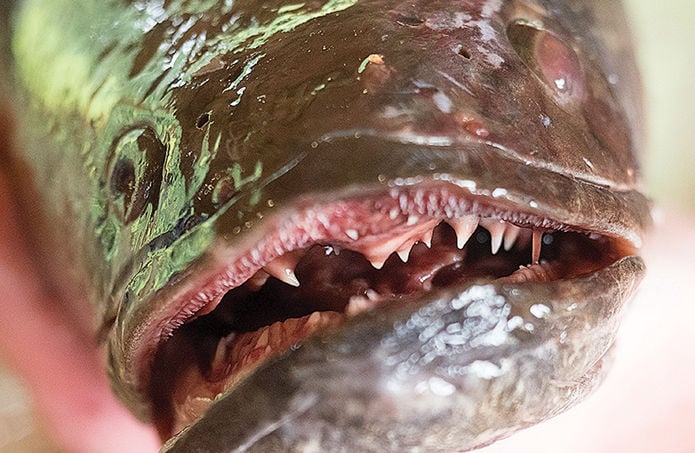 Initial fears that invasive snakeheads would cause catastrophic declines in native fish species have not been realized, but new research suggests they may be driving shifts in fish populations in two rivers in Dorchester County MD. 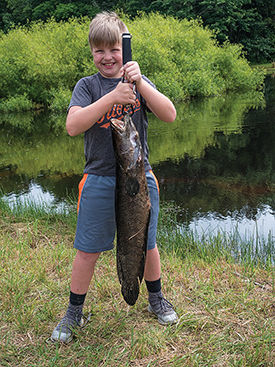 Ten-year-old Dustin Stem worked with his brother Ryan to land this 10.68 lb. snakehead, the tournament winner. The boys and their father traveled from Bel Air, MD, for the tournament. 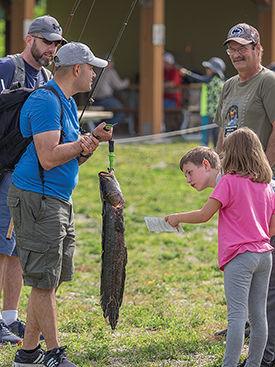 Andrew Johnson, 11, and his sister, Faith, 7, check out a snakehead caught by Rafael Ramos at the Harriet Tubman State Park in Dorchester County, MD. The fish weighed in at 8.95 pounds, garnering second place in a June snakehead “derby.”

Something was pulling his fishing pole into the water — something big. So, Dustin Stem ran over and grabbed the pole just as it was about to disappear into the drainage pond’s murky waters.

The 10-year-old was soon joined in the fight by his 11-year-old brother, Ryan. The final heave onto land fell to an adult who had been fishing nearby. What they discovered at the end of the line was a monster: 10.68 pounds of leopard-print scales, triangular teeth and a face only Frankenstein could love.

One northern snakehead down, countless more to go.

More than 100 fishermen participated in a snakehead “derby” in a national wildlife refuge on Maryland’s Eastern Shore in June. The state’s Department of Natural Resources and the U.S. Fish and Wildlife Service organized the event, hoping to enlist more anglers in the battle of attrition against the invasive species in the Chesapeake Bay region.

“It’s something unique where you can go out and catch them, bring them home, eat them and feel good about it,” said Joshua Newhard, a biologist with Fish and Wildlife’s Annapolis office.

The species is a native of Asia and has no natural predators in the mid-Atlantic’s freshwaters. Fishery managers in Virginia and Maryland have long warned that the snakehead’s voracious appetite and prolific spawning ability could spell ecological disaster.

After Channa argus appeared in the Chesapeake watershed in 2002 and spread to most of its major rivers, little evidence emerged to support those fears. A new fish population analysis conducted in the same waters as the June fishing tournament, though, suggests that snakeheads may not be off the hook after all.

At the time, the researchers were looking into the ecological impacts of a small dam constructed to block saltwater. A few years later, snakeheads found their way into the rivers. The two men realized they had a unique opportunity to see how life changed in the waters after the invaders’ introduction.

Their latest sampling, conducted from June 2018 to May 2019, provides the strongest argument yet that snakeheads can upend a Chesapeake ecosystem. And the effects might not just be limited to two rivers on the Eastern Shore, the researchers said.

At the Blackwater refuge, Newhard and Love used baited, fish-trapping nets to catch more than 45,000 fish the first time around. Using the same methods more than a decade later, they only counted a little more than 7,600, a decline of more than 80%.

Where did all those fish go? It’s possible many were eaten or muscled out of their territory by snakeheads, Newhard said.

“I like to say there’s only so much energy to go around,” he said.

Snakeheads registered eighth in abundance in the latest survey, but that figure likely obscures the species’ influence on the ecosystem, Newhard said. The study didn’t involve weighing the fish, but if it had, snakeheads “would easily be in the top five,” he added.

Newhard doesn’t want to put all the blame on snakeheads, though. Last year’s record-shattering rainfall led to low dissolved oxygen levels in the water. That would cause many fish to flee — but not snakeheads, which can tolerate meager amounts of oxygen and even breathe out of water for short durations, he said.

“I’ve had them sit in a refrigerator for three days and still be alive,” Love said. “They’re not your typical fish.”

Another finding points more emphatically at snakeheads as the cause: There were stark declines in the types of species snakeheads prefer to eat. White perch were once the most dominant species by far, accounting for nearly 40% of all those netted. By 2018–2019, barely 10% were white perch. The abundance of sunfish, another snakehead staple, also dimmed in parts of the system.

Meanwhile, two species not typically found on the snakehead’s menu — common carp and gizzard shad — emerged as the top two most common fish.

The results are particularly concerning because of the study’s location, Newhard said. The Blackwater area is one of the few freshwater marshes in the Chesapeake region and historically has served as an important nursery for perch species and other fish.

The two researchers don’t expect to finish analyzing their results until the end of the year. But they say the early findings make a case that snakeheads are making their presence felt.

“I think Blackwater as a nursery has changed and is degraded,” Love said. “We cannot determine if snakeheads actually caused the changes or if some other effect we did not measure did, but in light of the science done on the species to date, we will have a justifiably strong argument.”

Newhard and Love may struggle to lure fishermen and other scientists to their way of thinking.

John Odenkirk, one of the region’s top snakehead experts, questions whether snakeheads caused the fish population changes documented at Blackwater. Any time a study involves measurements collected more than a decade apart, there are bound to be many changes triggered by a variety of factors, such as fishing pressure and weather, he said.

In the Potomac River and the creeks on the Virginia side of the waterway, “we’ve yet to document any sort of ecological shifts,” said Odenkirk, a Virginia Department of Game and Inland Fisheries biologist. “Ill effects are really hard to come by, and I would argue that we haven’t really come across any ill effects so far.”

The snakehead’s numbers have exploded on both sides of the Bay since it was first found in a pond in Crofton, MD, in 2002. The so-called “frankenfish” made it to the Delmarva Peninsula by 2010. Wherever it has turned up in the Chesapeake or its adjoining waters, the snakehead’s abundance has typically tripled within the first few years.

It has now colonized most major Bay tributaries, but densities vary from region to region, scientists say. “Hot spots” include the Gunpowder, Potomac and Patuxent rivers, Love said. At its current rate of expansion, the snakehead will be found throughout the entire Chesapeake watershed in about a half-century, Neward and Love predicted in a 2018 paper.

Odenkirk, though, has documented a healthy leap in largemouth bass numbers and a stabilization, if not a drop, in the snakehead population’s growth. He suspects that in the wake of its initial population boom, snakeheads outpaced the carrying capacity of local waterways. Now, things are trending toward equilibrium, Odenkirk said.

“They’re definitely here to stay,” he added. “We’re not getting rid of them. They’re not doing the catastrophic damage we predicted. But it may still happen.”

Fishermen also deserve some credit for heeding calls to catch and kill as many snakeheads as possible, Odenkirk said. They didn’t need much persuading, though.

When hooked, snakeheads put up a satisfying fight, fishermen say. When cooked, the meat is white and mild.

On a Saturday morning in June, many fishermen drove two hours or more from the suburbs of Baltimore and DC to participate in the Blackwater snakehead derby. Love and Newhard opened the tournament by discussing its higher purpose: getting rid of as many snakeheads as possible.

“There aren’t really any bad areas around here in Blackwater” to find the fish, Newhard told the group.

DNA tests revealed that the snakeheads found on the Eastern Shore likely didn’t swim across the Bay from the Potomac but rather were brought in by humans from a population in Delaware, Love said. He believes much of the snakehead’s expansion was caused by fishermen introducing it in waters closer to home, so they don’t have to travel as far to find them.

After their discovery, Maryland and Virginia quickly banned possession of live snakeheads to prevent people from moving them around. They must be killed immediately or released directly back in the waters where they were caught.

Snakeheads have been an economic boon in the out-of-the-way corners of Dorchester County. Before the species reared its ugly head, a fisherman was an uncommon sight on either the Blackwater or Little Blackwater, Newhard said. During their sampling over the last year, they spotted fishermen on kayaks at least once per outing.

“The word is out,” Newhard said.

Charles “Caz” Kenny is helping to spread that word. In March 2018, he launched a Facebook page called SnakeheadLife.com to give the growing fishing community a digital gathering place. As of late June, it had garnered more than 4,300 members.

Kenny makes a living as a fishing guide in Dorchester’s backwaters, where snakeheads are a favorite catch. He also sells whole snakeheads to restaurants across the Bay and to a local market. He came to the Blackwater fishing tournament to share his tricks for landing a big one.

Despite how good the fish has been for his wallet, Kenny has mixed feelings about the phenomenon.

“There ain’t nothing for the better,” he said. “What I see right now is no juvenile [largemouth] bass. I don’t see bass under 12 inches anywhere. These areas where you see people on the bridges catching 100–150 snakeheads and putting them on Facebook used to be bass nurseries.”

It’s difficult to tell whether snakeheads are affecting the bass population, Love said. There aren’t enough snakeheads to have depleted the bass’ food sources, nor are bass commonly eaten by snakeheads. Greater threats loom for bass, such as overfishing and loss of underwater habitat, he said.

That could change, though. The toothy predator has been shown to spread a potentially deadly virus to bass.

It could take years until the impact of snakeheads becomes apparent, Love said.

“Some invasive species can take decades before the science fully describes consequences of their introduction,” he said. “For some reason, expectations with this species were set really high in the early 2000s, and when that bar wasn’t achieved within 10 years, some people shrugged and said, ‘Eh, so what?’

“Who knows? Maybe they’ll be right, and in 100 years, snakeheads will be as American as apple pie. But I’d just caution everyone that the story with snakeheads hasn’t been fully written yet, and it’s dangerous to pretend that it has.”

In the meantime, fishery managers would like to see more fishermen join the battle. In Maryland, snakehead tournaments have taken place on the Potomac, and officials hosted tournaments in 2016 and 2017 along the Chesapeake and Ohio Canal. This year’s derby at Blackwater was the first of its kind on the Eastern Shore.

Over five hours, fishermen caught and killed 25 snakeheads, according to Love’s tally. The biggest catch of the day belonged to the young Stem brothers with their 10-plus pound haul.

“Our hope is to grow this fishery at a rate that outpaces the population growth of snakehead,” Love said. “Unfortunately, we haven’t seen