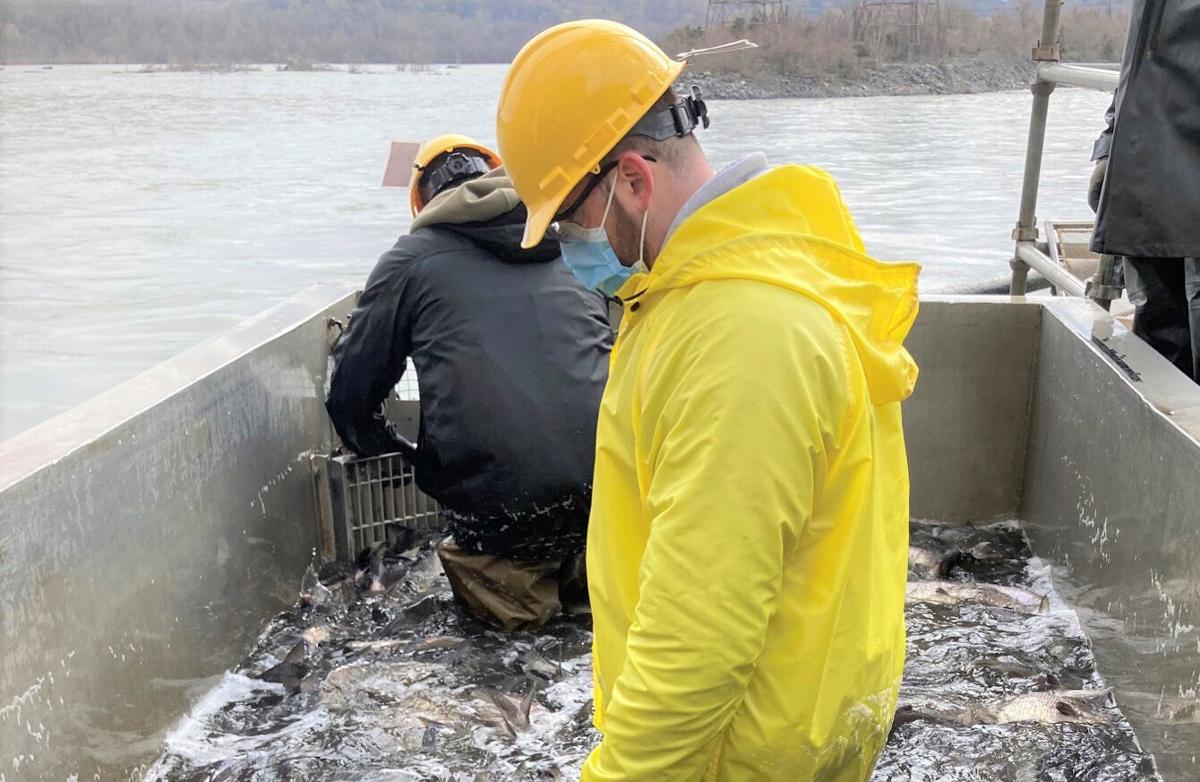 Workers sort through fish captured at Conowingo Dam. Snakeheads, an invasive fish, this spring were collected and donated to food-insecure families. 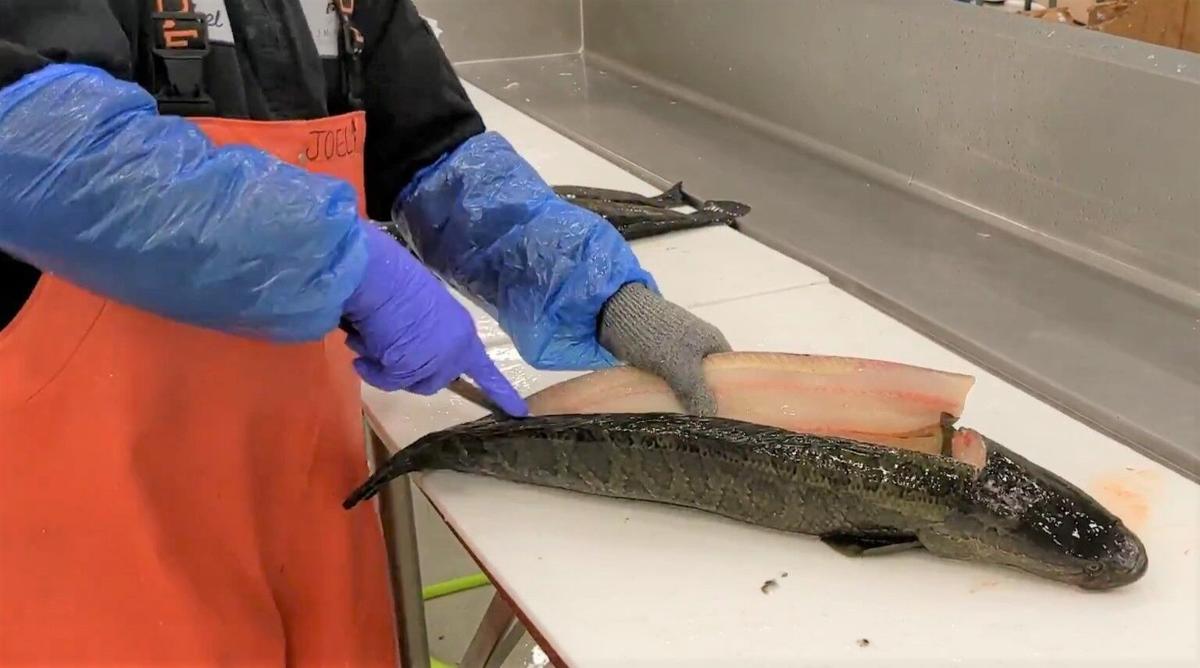 A worker with J.J. McDonnell & Co. prepares a snakehead for a Maryland food bank. 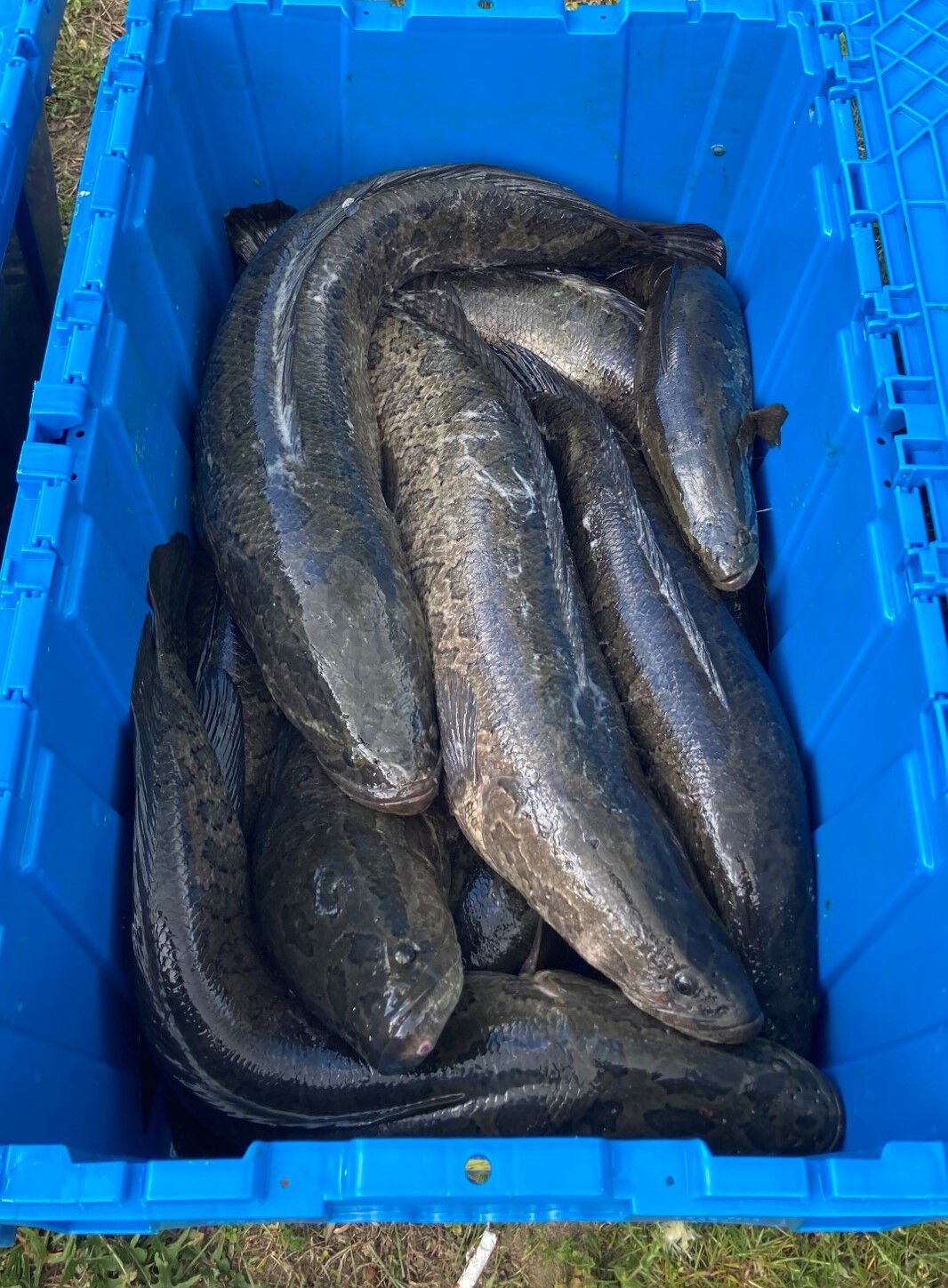 Snakeheads from the Conowingo Dam are collected in a tub before processing for food banks and other service organizations in Maryand.

The invasive northern snakehead may not look terribly appetizing. To most people, it’s a creepy, toothy fish worthy of its “frankenfish” nickname. It has a long reptilian head, blotchy skin and an untapered body that makes it look like a short but beefy eel.

But most who’ve tasted a snakefish fillet will tell you that it is a treat — mild, sweet-tasting with no fishy aftertaste. Some have compared it to such piquant seafood gems as flounder and mahi-mahi.

So, instead of destroying snakeheads captured each spring at the Susquehanna River’s Conowingo Dam in an effort to stop the successful invader's spread, the Maryland Department of Natural Resources decided to donate the fish to food banks and other organizations that feed food-insecure families.

At last check, more than 3,500 pounds of snakeheads had been captured from a fish lift at the dam — which is designed to capture native migrating fish such as American shad and river herring so they can be transported to spawning grounds upstream. But now that there’s a steady “bycatch” of snakeheads, the agency turns them over to a local seafood wholesaler, where most of the fish are filleted, vacuumed-wrapped, frozen and distributed to nonprofits.

“It’s not often fish is made available. It’s nutritious. We expect it will move pretty quickly,” said Joanna Warner, director of the Baltimore-based Maryland Food Bank, which works with partners all over the state.

The DNR contacted the state Department of Agriculture, which oversees seafood marketing. They worked out an arrangement with J.J. McDonnell & Co., an Elkridge-based seafood wholesaler. The company fillets and packs the fish for distribution to the Maryland Food Bank and Maryland United Way. In return, the company gets to keep some of the snakeheads to sell on the wholesale market.

Will seeing a pack of 5-pound fillets stamped with “snakehead” give some food bank recipients pause?

“It’s really unfortunate that it has that name,” Warner conceded.

But Stephanie Pazzaglia of J.J. McDonnell & Co. said the fish’s unsavory name is quickly forgotten when people bite into a snakehead. “Snakehead is delicious,” she said. “It is a very mild, almost sweet-tasting fish.”

“Everything we bring in goes out the door,” she said of the company’s wholesale market for snakeheads.

The Maryland Food Bank is considering including cooking and preparation tips along with the fish.

Though still in its infancy, the snakehead market is quickly expanding — finding a place on menus in restaurants and in seafood sections of retail stores. Sometimes they are labeled as Chesapeake channa (from the fish’s taxonomic name, Channa argus) to make it sound … well, less serpentine.

That’s legal. There are federal transparency rules on what you can and cannot call specific fish. The federal Food and Drug Administration has approved the term Chesapeake channa for snakeheads. (But you can’t sell striped bass as rockfish.)

“Some people like to use snakehead as the name and some people kind of steer away from it,” Pazzaglia said.

Until now, most of the snakeheads the company has sold have come from people who have hunted them with bows and arrows, or guns, she said.

The snakehead invasion in the Chesapeake Bay region dates back to at least 2002, when some were found in a pond in Crofton, MD, in the upper Patuxent River watershed. Others soon popped up in the Potomac basin and other Bay tributaries. The source is believed to be a combination of intentional and accidental releases by anglers and aquarium hobbyists.

The fish’s discovery made state fishery managers break out in a sweat. With no natural enemies, it has been labeled an “apex predator.” Many feared that the voracious fish would outmuscle native game fish and gobble all of their food. The snakehead’s ability to breathe out of water and crawl over land for short distances added to the fears.

Eradication efforts have been futile. But if we can’t beat them, fisheries managers say, we might as well eat them.

Two other recently embedded invasive species, blue catfish and flathead catfish, also are caught at the Conowingo fish lift, but they are kept for research by the DNR and Penn State University. Scientists are collecting data about age, growth rates, diet and genetics, with the aim of better managing those species and determining their impacts on other fish and aquatic ecosystems in general.

“This [food bank] initiative serves multiple goals, including controlling invasive fish species by harvesting them, [minimizing] their impacts on the Chesapeake Bay ecosystem and providing protein-rich meals to those in need,” said DNR Secretary Jeannie Haddaway-Riccio. “We also improve our scientific data, which will help us better manage these invasives in the future.”

A second fish lift that allows direct passage over the dam was not opened this year after an incident last spring in which about 35 snakeheads were seen passing into the Susquehanna River above the dam. Desperate netting activity captured 14 of them and two more were later recovered upriver. But nearly 20 of them got away, marking the first time that snakeheads were known to be in the Susquehanna above the dam.

This is great stewardship! Loving our neighbors twice by helping Bay ecology and feeding people. I love it!